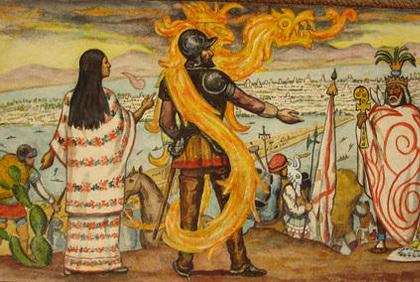 #225:
THE MEXICA MARTIANS
CELESTIAL OCCULT SIGNATURES
Landmarks of the Fallen Ones

The purpose of this study is to ascertain the approximate configuration of the Martian motif of the Face of Mars complex on the Mexican basin of the nation’s capital city. As with most ancient and modern world capitals, this study suggests that the layout of the city approximates and/or has a direct correspondence to the ley-lines of the Pleiadian pyramid city complex on Cydonia, Mars. Many believe that there existed a pre-Adamic race not only on Earth with such fabled places as Atlantis but that the Earth’s civilization had direct contact and was subject to a colonization of cultures and other-world civilizations on other heavenly bodies such as Mars, the Moon, etc. It has been increasingly evident due to technology and human space-probes that there exists water on Mars for example. Many are slowly being convinced that Mars did experience a nuclear type of war and/or catastrophe that ravaged its surface.

There is evidence of pyramid structures, pylons, obelisks, etc., on Mars. There is evidence of massive city grids on the backside of the Moon and so on. If these suppositions are plausible, then it would stand to reason that the lost knowledge and connection to Mars, for example would have been transmitted to the other side of the post-Adamic age and race, This type of ‘secret knowledge’ has been funneled through the Luciferian Secret Societies mainly, and such esoteric knowledge has been secretly projected or marked-off in plain sight. One such venue is to ‘tag’ the world capitals that the world ‘elite’ rule with such Martian architectural markers and layout. Why? To one degree such layouts funnel the cosmic energies. For whom? This study suggests that based on Biblical interpretation of such a paradigm, a prior civilization was made up of celestial being, at least in part. This notion was to include primarily Fallen Angels or those that became. The Bible speaks of those Angels that ’left their 1st estate’.

Many believe that on one level of interpretation, this pertains to their literal corporal beings in that for example, such might have been able to inter-dimensionally transform themselves to appear in flesh. Why? As Genesis 6 states that it was for the forbidden act of having sexual intercourse and produce giant human hybrids. Others also point out that such a construct of terms suggests that the Creator had stationed these creatures or Angels and does throughout the Universe. One also has to take into account that not only Lucifer fell. Although it is recorded that it was with him where iniquity was first found’, the rebellion of Lucifer produced a series of subsequent rebellious interjections that also directly affected the human race of Adam. One such subsequent rebellion can be understood from the book of Enoch. Such understandings are also corroborated by the marrieds of pictorial, pictographic and textual evidences from independent civilizations around the world.

A Prophetic Landscape
As to the specific Mexica Martian motif that marks-off the Mexica capital, the following is suggested. The lay-lines are approximately revered and rotated about 45 degrees from the Cydonia template. This motif is very simple; it consists of the 7 pyramid city structures, the D&M pentagon giant fortress pyramid. Then there is the famous Face of Mars that is purported to be the mausoleum of the fallen King of Nibiru, Ala-lu. The give-away sign of what the Face of Mars would correspond to on Earth is easy to ascertain given that in modern times, most of the Luciferian city planners use a racing track of sorts to depict this. In the case of Mexico City, it is its famous Autodromo where they have the Formula 1 races, etc. The track though is rotated by the 45 degrees offset. Another sign is that adjacent to the Face of Mars, there is a circular or round structure. Such is the case with the Autodromo, there is the Palace of Sports dome complex next to it. The D&M giant pyramid usually will correspond to a fortress of castle of some type.

This is the case with Mexico’s Chapultepec Castle. The delineation of the area does appear to be in a 5-sided array. The triangular grid does also point to the center direction as in the case of Mexico City and Mars. It is commemorated with an All-Seeing Eye of Horus type of pyramid by way of the street layout. What is unique about the castle is that it makes-up the ‘mouth’ of the ‘Crouching Puma’ that the mountainous ridge portrays from the air. The ‘eye’ would correspond to the world famous Anthropological Museum where the Aztec Calendar is housed. The castle is also the only one in the New World that was occupied by actual Royalty; that of the Hapsburg Maximillian of Austria. This was in essence one of the 13 Luciferian Bloodlines that rule the world through its banks and the debt policies of the Money Changers. The area just north of the castle is where the Masonic Lodge of Mexico is situated, etc.

The 3rd aspect of the Martian motif is that of the Pleiades motif. In other world capitals, such an array of the 7 stars are associated with city street round-abouts or monumental squares, etc. In the case of Mexico City, this area corresponds to the Country Club Park. Other aspects to consider in this observation of the Mexica Martian motifs is that the hexagram that is constructed by the triangulated motif has the center point approximately where the place was situated when Cortez officially met Montezuma on the actual causeway. The next observation is that the Zocalo or the Aztec plaza was and is in the direct ley-line to the place of the ‘Pleiades’. Apparently, even where the Temple Major was situated to correspond to the actual ley-line of Cydonia, Mars.

The Mexico City basin that once was a lake, Texcoco is now construed to show an outstretched winged eagle. Only less than .1% of the lake remains but ironically it is juxtaposed directly above the eagle’s head. The illustrations of the ancient lake bed will be marked as will to outline of the former Tenochtitlan pyramid island. Moreover, this eagle motif is the national coat of arms, the Golden Eagle with a serpent in its mouth. In the first original tales is that of a prophecy; it was suggested that the snake was a rat. The eagle is now the national emblem that is also the centerpiece of the try-color flag of Mexico. Other particularities of this eagle motif is that the Benito Juarez International Airport makes-up the eagle’s body and the planes come and go off the runways that are parallel to the eagle’s body frame.

A People of Prophecy
In this perspective of the whole Mexica metropolitan view, using GoogleEarth, the Martian motif and eagle can only be seen from above. The eagle motif appears to be resting on what was the core island of Tenochtitlan. Also this portion thus renders the Martian motif hexagram of the Cydonia, Mars complex. Interestingly, this configuration is a mirror image of the other eagle with a hexagram; it is that if the United States. In that depiction, the hexagram is above the eagle motif. It appears that most of the major world capitals testify of the same elemental core sources of knowledge and origins of such a Martian motif of the likes of Cydonia, to include extra-terrestrial visitations. One such knowledge handed down to the human race has been how the world capitals, past and present use such an extraterrestrial motif as the one from Cydonia, Mars.

Such is the case with Mexico City. Such a Martian motif can be difficult to decipher but once the major landmarks of a city are identifies, the template design falls into place rather easily. Mexico City or the capital of the Mexicas or Aztecs is one such place. It is rich in history, prophecy and esoterical constructs. The capital city was in itself a place of prophecy as the Aztecs were themselves conquistadors to the land. They are purported to have come from the land of Aztlan in what is now the U.S. Southwest. It is said that when the Aztecs arrived into the Valley of Mexico, Teotihuacan or the ‘City of the Gods’, just northeast of the city was already abandoned. The prophecy of where the Aztecs were to build their city was based upon the sign of an eagle wrestling and eating a Serpent. This is said to have been witnessed by the High Priests of the Aztec tribe in what is the Tenochtitlan Island.

Another prophecy was given that when a comet appeared in the sky, the return of the white skin, blond and blue-eyed ‘god’ of Quetzalcoatl would occur. This was eerily fulfilled with the Spanish lead by Cortez came in the year Healey’s Comet streaked across the sky. The lake Texcoco is now all but drained. In its place, the world metropolis of Mexico City has emerged. As subsequent ‘invaders’ have come also, those of the Luciferian kind primarily rule as they do all other capitals of the world. This sad condition has been perpetrated by the fall of mankind. Based on the Biblical worldview, the Scriptures state that the current condition of Adam’s race is in a state of rebellion against its Creator, YHVH and chose through deception the lies of Lucifer. The contention is for world dominion at any cost, even the price of one’s eternal soul.

Although Lucifer cannot become ‘god’ himself, yet he promises that possibility to all his followers and in exchange for the temporal powers and pleasures of ruler-ship on the Earth of such world capitals. Ultimately it will be the high price of one’s soul that is eternal that men and women eagerly exchange and pay to have but a brief span of limited allotted time. In terms of the prophecy that is related to the coming of the ‘Teacher’…the ‘Peace-Maker’, will such a personage come in conjunction to a great comet also? Was Hernan Cortez the actual fulfillment of that Mexica prophecy or has it not come to pass yet and the ‘Christ’ figure of the Americas is yet to arrive on Earth?

If any indication of what occurred when the Spanish came and subjugated the Mexicas of the New World, it did not bode well for them. In fact Biblically speaking, this will unfortunately be the case for all the nations. Although the coming of the AntiChrist will be on a ‘White Horse’ type of metaphor and having no arrow but just a bow, he will deceive many and by ‘Deception he will make war’. He will only initially bring a worldwide peace but will be a short lived one and a false one. And as with the Mexicas, it will not bode well either with the world inhabitants until the true conqueror of sin, death and Lucifer returns, Jesus Christ.
________________________