#271:
REV 12 SIGN PROCESSION
COUNTDOWN TO THE GREAT WONDER
Conjunctions of the Lesser Luminary

The purpose of this study is to track the trajectory of the Moon, the Lesser Luminary in the Heavens as it reaches the point of maximum to configure the Great Sign of Revelation 12 on September 23, 2017. The illustration will depict the line that the Moon will take starting from the constellation of Taurus on September 12, 2017. The timeline will highlight certain key conjunctions and alignments that appear to be interesting as the different phases of the Moon will also be illustrated, as it will look on that corresponding day against the sky. This study seeks to highlight several key factors of this apparent ‘Procession of the Lesser Luminary’ as a ‘Queen’ type in relationship to the Sun. It is Biblically understood that the Sun is often portrayed as Christ that gives light and is the source of life and light, i.e., ‘The Light of the World’.

The Moon is thus also anthropomorphized as the consort and Wife of Christ, the Body as in the Church as she is the reflector of the Glory of Christ, or should be. It is the glory or ‘treasure’ taught about in 2 Corinthians 4:7 in that it is the Holy Spirit residing within the spirit of a regenerated saved soul. One day, such ‘dusty’ earthen vessels much like the dusty Moon will be changed to ‘Stars’. Those literally covered in the dust of the ground and those alive will be given a Glorified Body and taken to Heaven to be with Jesus forever, etc. Perhaps the Redeemed will literally shine in some aspect as it was revealed to Daniel, metaphorically. This transformation or metamorphose, will take place in an instance. It will display the inner workings of the ‘Master Jeweler’ of all that Christ Jesus has brought forth as a ‘treasure’ in one’s life and Journey of Faith.

Once in Glory, the Saints will be reviewed at the Bema Seat of Christ and make a ‘Procession’ much like the Moon will make across the tapestry of the Heavens as it culminates in the Revelation 12 Sign. Consider that at the core of things pertaining to ‘Signs in the Heavens’, one of the greatest ‘Signs’ on Earth is that of a redeemed soul that Jesus Christ has saved in the world. Pertaining to the ‘procession’ of the Moon, on one hand, the illustration demonstrates the amazing symmetry of the Creator as the Moon starts in Taurus below the Ecliptic. The Moon traverses along the constellations and crosses the line near the King Star of Regulus. From that point forth, the Moon is above the Ecliptic that shows a tapestry of timing and design.

Astronomically, it is at the juncture of Leo, the ‘King’ of the Signs that the Moon meets up with and switches phases totally as if twirling in a cosmic dance of the Queen before the King. What is amazing is that from that point forward the Moon is ‘obscured’ or ‘hidden’ almost the entire length of the Virgo Sign. This depiction is reminiscent of how one day the LORD will ‘obscure’ or hide His Queen in His ‘Chamber’ against the ‘Day of His Indignation’ as Isaiah 26:20 alludes to. It is as if once the Moon got to Leo, he ‘took’ her and ‘raptured’ her to not be seen anymore. The next observation is that at the point and time that the Moon is ‘New’, it conjoins with the Sun. It would appear as its direct opposite in that the Moon is totally ‘black’ as the Sun is totally ‘white’ at that place and time, etc.

This speaks to the cosmic law of duality and opposites. The next observation is pegged to the Feast of Trumpets, as the Moon is dead center in the ‘womb’ area of Virgo on the 21st of September. It would seem that as the Jews will be ‘forced’ to observe the Moon to determine when the sliver will be calculated, they will inevitably be drown to the Revelation 12 Sign. The point is that the Revelation 12 Sign, although at an apparent ‘mid-Tribulation’ junction in terms of relative time correlates to the 4th Rapture out of 7 in the book of Revelation. According to prior studies it has a factor of ‘retro-active’ prophecy pegged to the chapter 4 rapture event that seems to be synchronized beforehand perhaps even when the Sign appears or soon thereafter.

No doubt, the Revelation 12 is a Sign of a ‘birthing’ and a Rapture as in to ‘snatch away’ from harm’s way as most have come to better understand the Greek word harpazo. However, there is still much contention and confusion about the legitimacy of the Sign. Consider the fact that even Jesus’ heavenly signs, i.e., the Christ Stars were not understood by the whole nation of Israel but a few in the inner Priesthood that confirmed the Star of Christ to Herod and only after, they searched the Scriptures. The Leaders and Teachers of Israel ‘missed it’. It took foreigners, those ‘outside’ the main ‘church body’…as in the Magi from Persia to recognize, discern and in turn follow by faith the ‘Star’ as being the Sign of Christ’s birth.

Perhaps to the people of Israel and its guarded King and Priestly class, such ‘researchers’ into the ‘Sign’ of the Sun, Moon and Stars might have appeared to be on the fringe, ‘astrologers’, non-scriptural, non-scholastic and unconventional. However the Magi’s diligence to seek Christ in all things and glorify Him is forever recorded as part of the example of man of faith acting on such ‘Signs’ in the Heaven that led to a face-to-face encounter and worship of the King of the Universe. Consider also that even when Jesus was amongst His people, in the flesh that one could touch and speak to, the nation of Israel did not recognize Jesus as the Messiah, nor the crowds and even some of the Disciples. Some said, ‘this about Jesus’, others ‘said that’, etc. Thus, the question posed by Jesus to Peter, etc. Even John the Baptist while in prison about to be beheaded sent to ask if Jesus was the ‘One or should they expect another’?

Jesus did not directly reply in the affirmative but directed them to the ‘Signs’ that the Messiah was to perform according to Scripture as His authentication of Messiahship. The point is that then, of who Jesus was in that very moment as to now with the Revelation 12 Sign phenomenon, there was and is real and heated contention. Never mind that Jesus’ birth and death both came with a ‘Sign’ and profound ones at that. Yet today, this topic of the Revelation 12 Sign phenomenon prophecy has divided the Church Body. It has become more contentious than the Tetrad Blood Moons, the Shemitah, Camping’s Rapture failed Rapture predictions and so on. One cannot help but compare the issues in these Last Days leading up to the Sign. There is much debate as there should be with the Church Body and one can appreciate a fair and balance critique.

So far, such that have attempted to critique the Revelation 12 phenomenon have erred in positioning themselves on the opposing viewpoint. That is understandable as some are cautious based on the faulty theology some are ascribing to it. It is distracting from the true essence of the Sign but in the same vein, such totally discount any possible prophetic merits of the Sign. The issue is with the interpreters, not the Sign itself. However, many within the Church body without any honest debate and discourse are dismissing the Sign. The contention over Jesus occurred right down to His death, burial and even after His resurrection, right down to this present day. Is it any wonder why a similar ‘Sign’ could have the same effect? Does that level of contention perhaps then give the Sign some measure of added credibility?

Although many researchers have attributed and liked the Revelation 12 Sign to the Rapture of the Bride of Christ, if it does not occur on the 23rd, at least the LORD has woken-up a whole lot of people. One is glad nonetheless that the Revelation 12 Sign phenomenon has gotten to this level as it would. What is unique about this ‘Sign’ is that it really belongs to no one. Who ‘discovered it’? John did. It is unlike the Blood Moon Tetrad or the Shemitah phenomenon in that many facets of the Body of Christ have been given key clues as to its prophetic composition. Although some have inevitably, ‘date set’ the Sign to be that of the Rapture, it has taken a life of its own. As some are insisting on one specific day and others on another, it becomes apparent that both or many cannot be true.

However, what the Revelation 12 Sign has done is awaken people within the Body of Christ and those outside of the nearness of the prophetic hour Imagine just how many have been led to read the book of Revelation and it is all about Jesus glorified and how He is alive and LORD of all and coming back. It is any coincidence that Christ is using this book and Sign of Revelation to get the Church ready. The Church needs to be straightened-up and for the world to behold and take heed.

As Daniel 12:9 is being literally fulfilled now, so is the scoffing. Scoffers have always come and gone but the difference now is that it is mostly coming from the within the Church Body. The passage in 2 Peter 3:3 is talking about the scoffing coming not from the world but the Church Body. Thus, perhaps presently this could very well be part of the ‘Sign’ and prophecy being fulfilled as a 'Sign' in itself as in the Days of Noah. It has been an amazing study over the nearly 10 years of research into the Revelation 12 Sign and all Praise and Honor goes to Jesus, the aim, subject and prophecy of all Biblical Signs per Revelation 19:10.
__________________________ 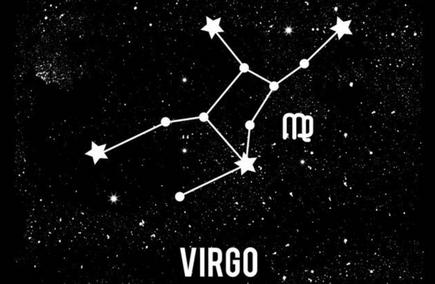 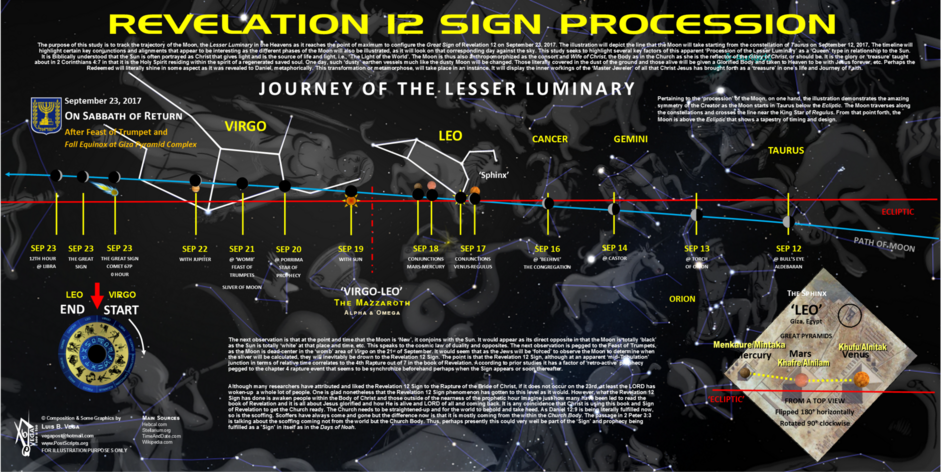