#255:
​COMETS OF THE VIRGIN
8 SIGNS IN CONSTELLATION VIRGO
Chanukah Lights of a Coming Dedication

‘Lift up your eyes on high And see who has created these Stars, the One who leads forth their host by number, He calls them all by name; because of the greatness of His might and the strength of His Power, not one of them is missing.’ -Isaiah 40:26

The purpose of this study is to ascertain the frequency of how many comets have traversed through the constellation of Virgo in recent history. The various paths of the comets will be studied to see if there is any possible correlation to the leading-up to the Great Sign that occurs in Virgo the Fall of 2017. In previous studies of this Revelation 12 Sign phenomenon, there have been already 2 comets that are significantly attributed to be part of the prophetic ‘picture’ in terms of their place and time. The 1st comet was C/2017 E1 or Borisov that was shown to be the ‘Conception Comet’ that ‘impregnated’ Virgo as it were. It came from a straight shot in Leo after nearly 2000 years of ‘coiled’ retrogrades in Cancer. The 2nd comet of significance directly associated with the Great Sign alignment is Comet 67p. This specific comet is called the ‘Jubilee Comet’ as it was last seen in Virgo when Jerusalem was liberated from the Muslims in 1967.

This same comet happens to conjoin with the Moon as the alignment is realized on the 23 of September in 2017. Many believe that this Great Sign of Virgo that appears to astronomically fulfill the depiction of the vision given by the resurrected Jesus Christ to His last Apostle, John is what was depicted in Revelation 12. Although the context is believed by many to be the mid-point of the chronological timeline of the last Week of Years per the prophet Daniel, it is a multilayered encryption of a past, present and future fulfillment. Although there are 1000s of comets in space, this study seeks to narrow down only 8 that have passed through the constellation of Virgo for the past 3 decades. What this study will also suggest that only these 8 have occurred in Virgo and have a possible prophetic implication as to suggest a ‘Menorah’ type of association.

More specifically, the type of ‘Menorah’ portrayed as each of the 8 comets could be attributed and correspond to a ‘light’. Thus, this would make the ‘Menorah’ typology one that is celebrated during Chanukah. The Chanukah Menorah has 8 stems instead of the 7 that was in the Holies of the House of YHVH. The Feast of Dedication as it was called in the New Testament attests to the significance and divinely sectioned observation of YHVH’s Earthly People when they threw-off the yoke of the Grecian Empire for having desolated the Temple by the desolations of Antiochus Epiphanies. It is believed that only 1 days’ supply of the Holy Oil that was used to light the Menorah lasted for 8 days. This occurrence was taken as a sign and has bene commemorated by the Jews ever sense. It is rather interesting that in no books of the Torah is Chanukah mentioned but only in the books of the Maccabees and more prominently in the Gospels.

Anatomy of a Comet
Taken from research, a comet is an icy small celestial body that, when passing close to the Sun warms-up and begins to release gases as it forms a ‘tail’. This produces a visible mini atmosphere called a ‘coma’. Comets have a ‘nucleus’ that ranges from a few 100 meters to several kilometers wide. It is believed that comets are composed of loose collections of ice, dust, and small rocky particles. The coma may be up to 15 times the Earth's diameter, while the tail may stretch 1 Astronomical Unit (AU). An AU is the distance from the Earth to the Sun. Comets may be seen from the Earth without the aid of a telescope if the comet is near and bright enough. Comets usually have elliptical orbits, and they have a wide range of orbital periods, ranging from several years to potentially several millions of years. Short-Period comets originate in the Kuiper Belt beyond the orbit of Neptune.

Long-Period comets are thought to originate in the Oort Cloud outside the Kuiper belt. ‘Hyperbolic Comets’ may pass once through the inner Solar System before being flung to interstellar space. The appearance of a comet is called an ‘Apparition’. As of November 2014, there are over 5,000 known comets and a number that is steadily increasing due to technological advances. However, it is believed that number represents only a tiny fraction of the total potential comet population in space. It is estimated by space agencies that roughly 1 comet per year is visible to the naked eye on Earth. Such ‘naked-eye’ comets that are that bright are called ‘Great Comets’. Comets are distinguished from asteroids in that comets have their mini atmosphere surrounding their central nucleus.

However, ‘Extinct Comets’ that have passed close to the Sun many times are those that have lost their ice make-up and dust and may resemble small asteroids. Also, asteroids are thought to have a different point of origin than from comets. It is believed that asteroids form from inside the orbit of Jupiter rather than in the outer Solar System. In the Hebrew word for star, כוכב (kokab) refers to any bright heavenly object, it presumably includes comets as well. Although highly suggestive, this notion of the 8 comets to be the 8 ‘lights’ have some unique properties as mentioned with the Borisov comet and 67p. The following is a suggested correlation based on the paths of the 8 comets traversing through Virgo since 1986. Since that time, to the convergence of the Great Sign in Virgo in the Fall of 2017 is 33 years.

There appears that 4 comets come into Virgo from the right side and 4 comets come from the left side. There is 1 comet, Lovejoy 2011 that comes up the middle as it were the ‘stem’ of the 4 respective branches. The comets, all 8 of them would represent the ‘Light of the World’ that signals the coming birth of the Light of the World, Jesus. This ‘Feast of Lights’ is also directly associated with Jesus Christ, His dedication and ministry. As the ‘Light of the World’ was and is one of the I AM’s of Jesus Christ that He Himself attributed His purpose and being with, the following is suggested concerning His birth. Chanukah usually falls in the winter season of the year. If one does take the supposed birthday of Jesus to be -3 BC on September 11, then approximately 9 months prior would be in December and the timeframe for when the Jews would celebrated Chanukah.

The Sign of Lights
This study would suggest that Jesus was ‘conceived’ during Chanukah. How all this is possibly tied to the comets of Virgo is that as a type and show, Virgo would thus represent Mary. At different times and intervals, each comet made its path through Virgo. The illustrated chart depicts the Ecliptic and the constellation from a solar-centric point of view using SolarSystemScope vs. the Earth-centric point of view used in Stellarium. The Sun is positioned directly in the heart of Virgo for the same perspective to render the 8 paths of the comets. The following observations are made.

Comet Lovejoy 2013 passed over the constellation and exited it in March of 2014. Then there was the Borisov Comet C/2017 E1 that ‘impregnated’ Virgo in November of 2016. Comet Haley 1986 is also currently traveling through the constellation and swung around in 2016 to conjoin with Spica. Comet 209P Linear will cross the ‘womb’ delineation of Virgo in 2019. There is Comet Encke that comes from the top and amazingly intersected Spica around March 2017. Comet Panstarrs also in March of 2013 intersected the head Star of Virgo as it come from the bottom. Also, there is comet Lovejoy 2011 that in March of 2011 made its perihelion near the star Spica as well.

This particular comet had a tail like a Muslim sword and was seen in the southern hemisphere, mainly Australia and New Zealand. It was reported then that this ‘Islamic Sword’ was to be an omen of the murderous Muslim religion that would unleash death and a mortal blow to the Church of Christ, specifically in the Middle East. It so happened that during that time period in 2011, several major earthquakes rattled Christchurch, New Zealand. In one quake, a prophetic picture immerged as the main Christian Cathedral was battered by the quake and nearly destroyed.

Thus not only are the 8 comets in Virgo suggested to be a ‘Menorah’ type of possible prophetic significance but such also acted as a ‘dagger’ in the case of Lovejoy 2011 thrust in the side of Virgo as to destroy the ‘Woman of Christ’, ‘Christ’s Church’, etc. This prophetic inference is related to the Red Dragon that seeks to destroy the Woman the her Manchild. It is depicted by the calligraphic rendition of the spelling of Allah in Arabic, the Moon goddess of Islam is associated with the red ‘dragon’ or serpent looking motif. In the Bible, especially pertaining to the Revelation 12 Sign, this Virgin is battling the Red Dragon ‘Beast’. It is the ages-old motif of good vs evil, light vs. darkness, Christ vs. AntiChrist and yes in history, Judeo-Christianity vs. Islam. This contention stared with the Serpent and Eve in the Garden and will play out its last vestiges in the coming 7 years of Tribulation for the ‘Eve’ in the Sky, Virgo that typifies Israel.

The Bible teaches that there is a struggle to the death between these 2 seed, that of the Serpent and of Eve. It will culminated in the battle of Armageddon as their offspring that have chosen sides have also battled this contention since the Garden of Eden. The struggle will be made manifest for the land of Israel, Jerusalem, and the Temple Mount. Presently, it is the sons of Islam that are against the Seed of the Woman and her offspring, both Jews and the Christians. The Bible also depicts an antithesis to the Revelation 12 Sign, that of the Woman riding a Beast. The antitype is that there is also another Woman of Wonder and another Beast or Dragon type of system. In this later case, it is the Woman that rides the Beast or as if the Beast is sustained by it. She is the counterfeit religion, who can only produce death and the false Christ. This other Woman by contrast drinks the blood of all those that follow the Light, the Lamb, Jesus and uphold His Testimony and Word.

Nonetheless, the Jews and many other peoples in other cultures view the apparition of comets as portents of disaster. Do all these 8 comets traversing Virgo in the last days to coincide with the apex of the Great Sign of Revelation 12 signify a warning to Israel? For example, it was reported that a comet appeared around the time of the Jewish revolt against the Romans in AD 66. This comet thus apparently brought the omen that destruction was coming, which it did as the Temple was destroyed on the 9th of Av in AD 70. Will such comets that are appearing Virgo now in these Last Days ‘reverse’ the omen and see the 3rd Temple be rebuilt? As the Chanukah typology is employed based on the 8 comet lights, will there soon be a coming ‘Dedication of Lights’ correlated to the future Temple of YHVH in Jerusalem? As the next prophetic realization is the 3rd Temple, the contention of the 2 Seeds over this property will escalate to a point of a coming Armageddon.
_________________________ 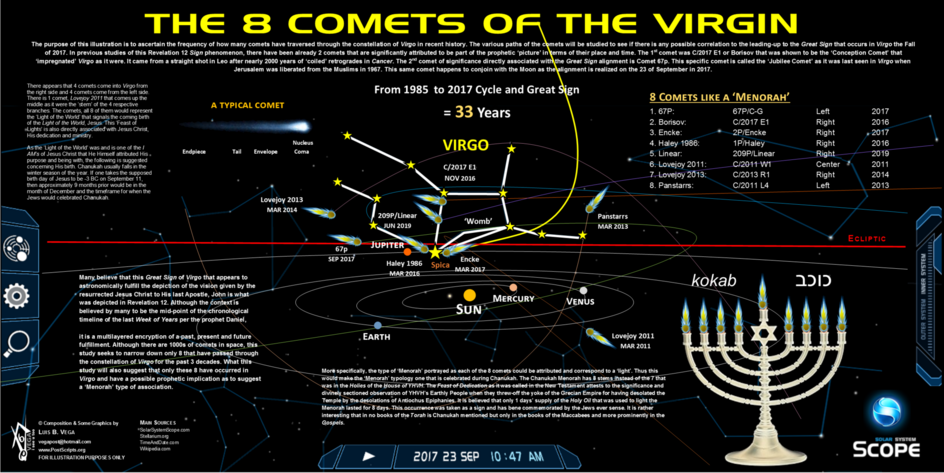 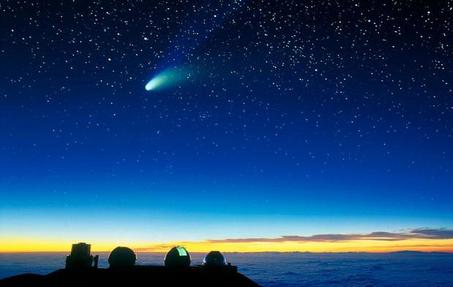