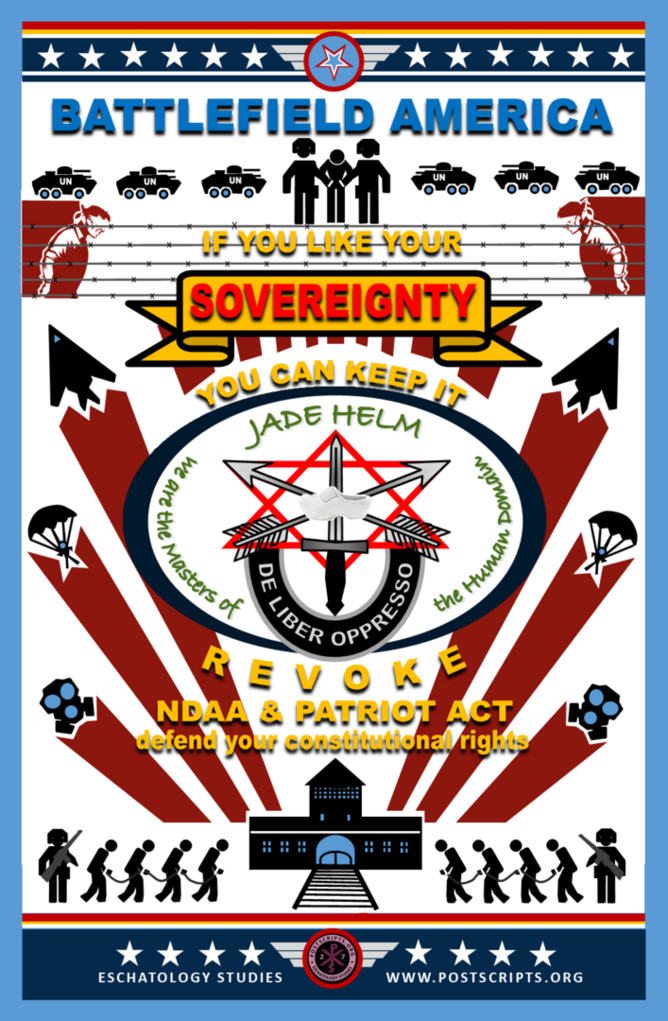 The purpose of this study is to theorize about what the JADE HELM Military Exercises that officially are said to begin on July 15 and end on September 15, 2015 are really all about. This would be a 62 Day Military Operation that will involve the Branches of various U. S. Special Forces. Many are suspecting that such training by the U.S. Military is a foreshadowing of the coming Martial Law due to an ‘Event’ or Series of Events that are to occur and converge for America at some point. Those who study End Time Prophecy are having an unsettling feeling that the Republic and the world for that Matter are about to be plunged into Hell, more so than they already are.

Many argue that such Military Exercises of this scope are now needed to confront the Enemies abroad in different type of Urban Warfare. However, many in and out of the Military Establishment are Sounding the Alarm that no such makeup fits the Protocols of this planned training. The Exercises are clearly for Domestic American Opponents that will oppose the coming Forced Integration of the U.S. into the New World Order based on the orchestrated ‘Event’ or events that are to be unleashed, if either Man-Made or not. Based on Leaked Documentation and videos, the Exercises are not against Muslim Jihadists, Chinese and/or Russian Assets.

The Targets were U.S. Citizens that are primarily either Constitutionalists, Libertarians, Gun Owners, Evangelical Christians, Returning Vets, etc. Ironically the U.S. Government is using specifically Muslim Jihadists, ISIS as the new ‘Fear Tactic’ and perceived threat on the ‘Homeland’. Many others are emphasizing that Chinese and Russian Assets will also eventually be used against Battlefield America. The consideration of certain aspects of who the U.S. Military is confronting and how it is comporting is reminiscent of a pre-World War 2 Nazi Germany. The German Chancellor used all the Legal Means to accumulated Power and centralize it through Executive Orders; Lists were made and Concentration Camps were prepared.

All that was needed was an ‘Event’ to declare Martial Law and defer Absolute Power to the Führer as all Civil Liberties were suspended. Whether it will be a Political Sabotage, a Natural Disaster, and/or Economic Collapse, many Students of the Last Days see the Proverbial ‘Handwriting on the Wall’. Many are actually seen a convergence of all the above in the same timespan to occur by the end of the Decade. There have been also many Followers of Christ that are having Visions and Dreams of Doomsday Scenarios specific to the USA; an Asteroid and Tsunami in the East Coast, a major Earthquake in the West Coast, Nuclear Fallout, Civil War etc.

Martial Law
Such calamities will require Martial Law and will eventually be implemented in the USA and perhaps other countries as well. As it is, the NDAA and the Patriot Act have allowed provisions to consider and treat the Continental Union as ‘Battlefield USA’. This makes anyone person or persons Military Targets now. Thanks to U.S. Congressional Lawmakers, the provisions allow for the Military to ‘Exercise and Master its Domain within the confines of the Territory of the United States. This is the Motto of Jade Helm.

The U.S. Military can detain People, interrogate them without a Warrant or Legal Representation for no reason and be Held Indefinitely. What is ominous is that among all such speculation of Calamities, the most probably one is the Economic Collapse that even the non-Religious Experts predict will occur within the timeframe of a September to October timeframe. If such a Military Exercise where to ‘Go Live’ at the end of such a term, that is when it would be needed the most as the predicted Economic Meltdown is to occur. This Economic Collapse Scenario is substantiated by the Shemitah Cycles and that is tied to the Lunar and Solar Eclipse Cycles.

Perhaps there is a ‘Countdown’ to a Fall culmination of events. If one adds for example 90 days from June 15, it will fall exactly on September 13, 2015. This will be the start of the New Year 5776. It is when the 7th Shemitah Cycle of 7 Years concludes with the 49th or Jubilee Culmination. This 90 Day Countdown to the New Year 5776 would start on June 15 is rather unique in that it appears to be a sort of Time-Marker of sorts. It is the 166th Day of the Year and there remains 199 Days left in the Year, an exact reversed image.

This Date Count is pegged to when the Temple Mount was liberated in 1967. What is interesting it that on September 23, the Roman Catholic Pope is scheduled to address the U.S. Congress. This is unprecedented as no Pope has ever addressed a Joint Session of the U.S. Congress since the Declaration of Independence was made in the American Colonies in 1776, a reference to 5776 and in Philadelphia no less on a Jubilee Year. Is this prophetic? He will also later-on address the UN. This timespan will undoubtedly be Unprecedented Times and will be Historic. What is prominent about this timeframe is that it is unprecedented in more than one way.

It is a convergence of Politics, Religion, Economics, and Biblical Eschatology. What this study suggests is that the Papacy will also ‘eclipse’ this same pattern of all the culminating Celestial Eclipses that will converge in the Fall. The Eclipses occur on Rosh HaShanah and Sukkot in particular. They are the Partial Solar Eclipse to start the New Year on September 13, 2015 and the Total Lunar Eclipse, or Blood Moon, the 4th and last of the 2014-15 Tetrad on Sukkot on September 28, 2015. Metaphorically, what is very intriguing to consider and parallel is that there appears to be an eclipsing also to occur of the Papal kind. The Papacy appears to want to also ‘eclipse’ this time period and will according to his published itinerary for that time.

Pope Addresses U.S. Congress
Is it any coincidence that the Pope will be in America during this very Prophetic Synchronization of Prophetic Time? The following is the Tentative Schedule of the Papacy visit to the United States in the Fall of 2015.

Sept 23
(Day of Atonement and Fall Equinox)
Proposing that Pope Francis visit the White House the following morning. The highlight of the Washington visit will be his speech to the Joint Session of Congress, the Senate and the House of Representatives, historic.

Sept 24
Pope Francis would leave for New York City on the afternoon of the 24th.

Sept 25
At the U.N. General Assembly on the morning of the 25th, to condone the 3-Day Post-2015 Sustainable Development Summit. This is the desired implementation of Agenda 21 among other Globalist Cabal of Population Reduction of the Georgia Guidestones flavor.

**NOTE: From Thursday, November 28, 2013 Perihelion of Comet ISON when added 666 Days results in Friday, September 25, 2015. This is the same Day the Papacy sanctions the Globalist Protocols for World Depopulation.

Sept 26
Pope Francis would be in Philadelphia meetings, which runs through the 27th, the Eve of Sukkot and the last Blood Moon, which is a Super Moon.

It is if the Papacy is ‘eclipsing’ or Stealing the Thunder of the Prophetic Implication in themselves of what the Signs YHVH is seeking to exclaim though the Eclipses. Perhaps the Itinerary of the Papal visit is part of this incorporating of the Signs all inclusive. It is just amazing that the Papal activities appear to be coordinated and in tandem with the most amazing time of Biblical implications.

Many believe such Signs are broadcasting a Turning Point in World History and even the possible nearness of the Rapture by some. Many End Time Scholars are drawing the parallels of the Jerusalem Year of Jubilee, 5776 with the 1776 Year of Liberty that the U.S. was founded on and that even is etched in the Liberty Bell in Philadelphia that the Pope will visit.

Will this be a time taken as an opportunity to extol the notion for a need of a New World Order with a new Reserve Currency and a hint of a strong man to lead such an Order? It is interesting to note that this High Priest or Rome, this Pope will be in the City of which it was the only one of the 7 in the book of Revelation that the true High Priest Jesus Christ did not rebuke. He actually promised a Door of Escape from the Trial that was to subsequently come after such an ‘Exodus’.

Martial Law Protocols
This is much like when Moses led-out the Hebrews from the Land of the Egyptian Pharaoh. Will this High Priest now in the Land of the American Pharaoh, perhaps sanction the leading of America’s People into Bondage and more so the entire World? Will a Spiritual Door be opened at the end of this coming Time? When will the ‘Exodus’ occur led by the true High Priest Jesus, one greater than Moses, i.e., as in the Rapture? After all, the Exodus was a Year of Release, of the Jubilee. But what is to be released?

Will the Blessing of American, at this time turn into a Curse and Subjection once again as in the Land of Egypt how with an American Pharaoh, a Pharaoh that knew not the GOD of Joseph? As it pertains to Jade Helm the following is a Poster rendering the possible implications of the Jade Helm Military Exercises aimed against the U.S. Populace in U.S. Sovereign Territory. The Poster attempts to convey that not only are the U.S. Special Forces involved but other Multinational Foreign Military Assets.

Many have seen United Nations UN Marked Vehicles in transit across the U.S. that to many suggests that at some point in time, the USA will be subservient to the UN Protocols and the Sovereignty of the USA will be relinquished. All those that stand opposed to such a New Order will be deemed ‘Enemy Combatants’. The very Emblem or Ensign of the Jade Helm Military Exercises is said to be taken from the U.S. Army Special Forces Insignia. It has 2 Arrows crossing each other and a Dagger in the middle. The Logo is enveloped with the Motto, ‘De Oppresso Liber’.

This is in Latin, meaning ‘Liberate the Oppressed’ or ‘From Oppression, Freedom’. What is different is that a translucent Wooden Clog of Dutch Shoes are centered on the Emblem. Many are attributing it to an Icon of the Concentration Camps of Europe that are coming to the USA. The Poster reverses this Motto to read, ‘De Liber Oppressor’. This is in Latin, meaning ‘Oppress the Liberated’ or ‘From Freedom, Oppression’. This Military Operation is a classic case of a Trojan Horse.

It is perpetrated by the very Government and a Commander in Chief that has vowed to uphold and defend the Constitution of the USA on the Bible that belonged to Abraham Lincoln. With such provisions introduced through the NDAA and the Patriot Act, the U.S. Constitution has been cancelled, null and void. What this now allows is for an ‘Event’ or series of events, either Political, Economic, Religious and/or Geological to have the U.S. President suspend the Constitution as Lincoln did during the Civil War.

And even the National Elections could be suspended, perhaps or even a certain type of a coming Civil War. All Powers during such a Time would be concentration in the Executive Office, in effect rendering the U.S. President a Dictator, much like Hitler attained by stealth. This has been allowed because although the Warning of National Judgment fell hard on the USA since 9-11, the Nation has not Repented. On the contrary, a recent report by the Pew Research Center documented that Americans are less Christian now than just 5 years ago. One interesting irony of 9-11 is that if the Economic Collapse is to occur at the end of a Shemitah Cycle, the Stock Market will perhaps be the ‘Event’ or series of events will lead the nation into a ‘Battlefield America’.
__________________________

What is Jade Helm 15?
https://www.youtube.com/watch?v=I_R4ntehIXI

What is Jade Helm 15
https://www.youtube.com/watch?v=RgtqXEuFohA