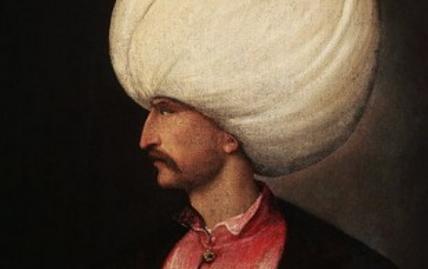 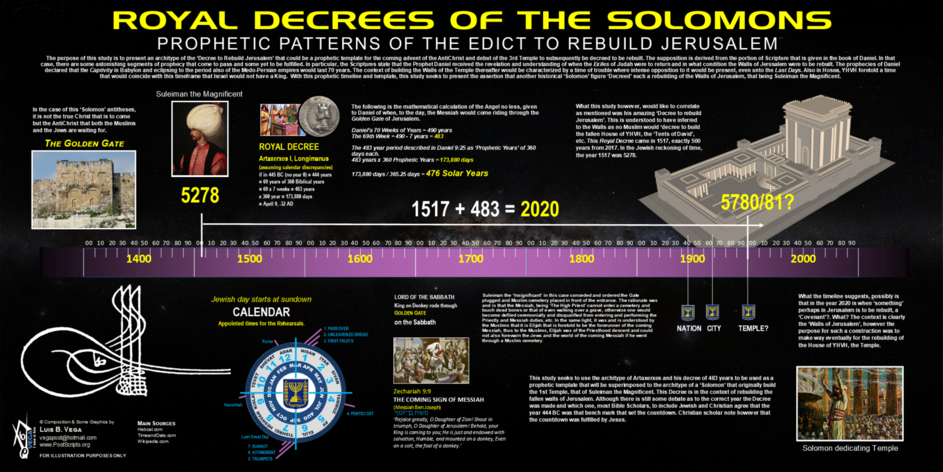 #281:
SULEIMAN THE MAGNIFICENT
ARCHITYPE OF THE COMING ANTICHRIST
Royal Decree to Rebuild the Walls/Temple of Jerusalem

‘Know therefore and understand, that from the going forth of the commandment to restore and to build Jerusalem unto the Messiah the Prince shall be7 Weeks, and 62 Weeks; the street shall be built again, and the Wall, even in troublesome times.’ -Daniel 9:25

The purpose of this study is to present an architype of the ‘Decree to Rebuild Jerusalem’ that could be a prophetic template for the coming advent of the AntiChrist and debut of the 3rd Temple to subsequently be decreed to be rebuilt. The supposition is derived from the portion of Scripture that is given in the book of Daniel. In that case, there are some astonishing segments of prophecy that came to pass and some yet to be fulfilled. In particular, the Scriptures state that the Prophet Daniel received the revelation and understanding of when the Exiles of Judah were to return and in what condition the Walls of Jerusalem were to be rebuilt. The prophecies of Daniel declared that the Captivity in Babylon and eclipsing to the period also of the Medo-Persian empires would last 70 years. The context of building the Walls of the Temple thereafter would be characterized by a time of trouble where intense opposition to it would be present, even unto the Last Days. Also in Hosea, YHVH foretold a time that would coincide with this timeframe that Israel would not have a King.

This study seeks to use the architype of Artaxerxes and his decree of 480 years to be used as a prophetic template that will be superimposed to the architype of a ‘Solomon’ that originally build the 1st Temple, that of Suleiman the Magnificent. There are unknown variables and suppositions that will follow, however there are known variables that are in fact Scriptural and are historical. Such is the timeline given to the Prophet Daniel from the ‘Decree to Rebuilt Jerusalem’. This Decree is in the context of rebuilding the fallen walls of Jerusalem. Although there is still some debate as to the correct year the Decree was made and which one, most Bible Scholars, to include Jewish and Christian agree that the year 444 BC was that bench mark that set the countdown. Christian scholar note however that the countdown was fulfilled by Jesus. The following is the mathematical calculation of the Angel no less, given to Daniel of when, to the day, the Messiah would come riding through the Golden Gate of Jerusalem.

It is rightly pointed out that in fact there were several ‘Royal Decrees’ that were made during the Captivity that started with Cyrus the Great. However, that was a generic and blanket statement upon which the subsequent ones become focused. The specific context of what was to be rebuilt later on was specifically decreed. Thus it is believed that the Decree to ‘Rebuild the Walls of Jerusalem’ as spoken by the Angel Gabriel corresponded to the one by Artaxerxes I in 444 BC. If the actual Decree is the one in 444 BC, then the following is true.

With this prophetic timeline and template, this study seeks to present the assertion that another historical ‘Solomon’ figure ‘Decreed’ such a rebuilding of the Walls of Jerusalem, that being Suleiman the Magnificent. Suleiman is Arabic for Solomon. This Sultan was of the Caucus region of the Black Sea that ruled from the former Constantinople. He is considered the ‘Moses’, ‘Solomon’ and ‘King David’ of the Muslims. In a sense, he is the antithesis of the true Solomon that built the Temple to YHVH, the Walls of Jerusalem and experienced the ‘Golden Age’ of Israel. So too did the Muslims have their ‘Golden Age’ of Islam under this monarch that perhaps applied the prophetic template of the Decree to ‘Rebuild the Walls of Jerusalem’ also.

In the case of this ‘Solomon’ antitheses, it is not the true Christ that is to come but the AntiChrist that both the Muslims and the Jews are waiting for. This will be the social, political and religious genius of this man that he will in some way ‘conquer through peace’ as the book of Revelation specifies. He is depicted as the 1st Horseman of the Apocalypse that only has a bow and no arrows. This architype of Solomon of the Bible ruled the entire Middle East and the European Balkans from 1520 to 1566. He was the 10th Sultan of the Empire and only his military and religious ambitions for Europe were checked at the Gates of Vienna, on 2 occasions.

The notion of such a comparison would be sacrilege as this Muslim ‘Solomon’ was not necessarily ‘magnificent’. Although he was highly intelligent noble and benevolent in many ways, he was bound to the customs of their Muslim code of successions and had competing heirs murdered at his command. This practice is known as Fratricide. What this study however, would like to correlate as mentioned was his amazing ‘Decree to rebuild Jerusalem’. This is understood to have inferred to the Walls as no Muslim would ‘decree to build the fallen House of YHVH, the ‘Tents of David’, etc. The 1st Royal Decree came in 1517, exactly 500 years from 2017. This same year saw also the 70th year anniversary or Jerusalem being liberated from his Muslims by the Jews for the first time since 70 AD. In the Jewish reckoning of time, the year 1517 was 5278. If one adds the original and Scriptural prophetic template of the 483 years to this date, it will converge at the year 5778 or 2018.

What the timeline suggests, possibly is that in the year 2020 is when ‘something’ perhaps in Jerusalem is to be rebuilt. What? Could it be some sort of 'treaty' instead? The context is clearly the ‘Walls of Jerusalem’, however the purpose for such a construction was to make way eventually for the rebuilding of the House of YHVH, the Temple. In the time of Suleiman, it was clearly understood that no such Jewish-Christian Messiah was to come and take his throne away. To this end, Suleiman ordered the sealing-up of the Golden Gate that Scripture foretold the Messiah would be coming through. This is the Golden Gate opposite the Garden of Gethsemane. The Golden Gate of Jerusalem facing the Mount of Olives to the east is the oldest of the current Gates that Suleiman the Magnificent rebuilt after the Muslim Ottoman Turks conquered the Middle East.

This is the same Gate, although much lower in elevation in which Jesus passed through on ‘Palm Saturday’. This is refereed as His Triumphal Entry as foretold to the day by Daniel. In particular, this Day was fulfilled as per the timeline of year counts given to the Prophet Daniel in Susa, Persia by the Archangel Gabriel. The book of Zechariah, for example also gives the description of how Jesus will again go through this same Gate as the Conquering Messiah. The Muslims knowing that the prophecies of the coming Jewish Messiah and that of the world would come as stated in both the Old and New Testaments decided to seal-up the Golden Gate.

Suleiman the ‘Insignificant’ in this case conceded and ordered the Golden Gate plugged and Muslim cemetery placed in front of the entrance. The rationale was and is that the Messiah, being ‘The High Priest’ cannot enter a cemetery and touch dead bones or that of even walking over a grave, otherwise one would become defiled ceremonially and disqualified from entering and performing the Priestly and Messiah duties, etc. In the same light, it was and is understood by the Muslims that it is Elijah that is foretold to be the forerunner of the coming Messiah, thus to the Muslims, Elijah was of the Priesthood descent and could not also forewarn the Jews and the world of the coming Messiah if he went through a Muslim cemetery.

This goes to show how vile the Muslim religion is and the ignorance of some Christian Liberals that erroneously attest that the ‘God’ of the Muslims is the same ‘God’ as that of the Jews and Christians. Islam thus seeks to prohibit the Creator from ‘having a Son’ and being the Sin Offering that could only atone for the sins of Humanity. If it were to be the case, such a false religion would at least hold to the notion that they too would seem to have Jesus, the Messiah come back to rule as the Grater Solomon, as the Greater Suleiman the Magnificent. Such a false religion as Islam always attributes itself as the ‘Religion of Peace’ but on the contrary, its very DNA is that of intolerance, Fratricide and murder.

More Christians have been beheaded, put to death by Islam than any other aside from the Roman Catholic Church. And this practice in consort with both false religions will be what will constitute the ‘Mark of the Beast’ that will see millions slaughtered over with. This study thus proposes the theory that the coming AntiChrist will likewise follow the same vein of power and ‘Decree’ as the Spirit of Antichrist is from this prophetic template that appears to be reoccurring. It is coming from the antithesis of the true Solomon of the Bible, whose name means Peace as in Shalom. However, the antithesis of this Solomon will be the AntiChrist, the false ‘Suleiman’ that will come in the Name of Peace’. This coming world ‘peace’ momentarily attained by the AntiChrist will be a false peace. He in fact will wage war and not only subdue Israel as the False Messiah or falsely believed ‘Man of Peace’, ‘a Solomon’ or more appropriately ‘a Suleiman’ but will deceive the whole world.

This is the difference in that what the Muslim ‘Solomon’ could not accomplish during this kingdom, the AntiChrist ‘Suleiman’ will in conquering the whole world. Once the chaos of the world comes to a brink, a man will come on the scene that unlike all the prior Despots, Presidents and Prime Ministers. This Luciferian ‘Suleiman’ will deliver on a seemingly ‘Time of Peace’, although short-lived. It will seem like the 5th Age has finally arrived, the Golden Age, the New World Order of the Masons, Luciferians and the Synagogue of Satan. However, as the Sultan could not break with the murderous tradition and practice of murdering his own sons, so too will the AntiChrist murder those not of his Order.

In this case, it will be the coming AntiChrist that will ‘Decree’ that the fallen Temple of YHVH be rebuilt. The intention at first will be seen as a gesture of ‘World Peace’ as no doubt the slogans will tell that this ‘House of Worship’ will be for all the Nations of the world, etc. The Jews and the world will be duped into this spell not realizing that this ‘Decree will be the ‘Covenant with Death’ that Isaiah warned Israel against. This Royal Decree will last for 2520 days and in the midst of the Week of Years, per the Prophet Daniel, on the 1260th day, this ‘Suleiman the Magnificent’ architype will break the Covenant. The end will be to have himself sit in the Ark of the Covenant in the Holy of Holies and proclaim himself ‘God’. What is the issue here? The issue is that it will be Lucifer incarnate and anyone not accepting his Mark will be put to death just like Suleiman the ‘Magnificent’ did.
_____________________