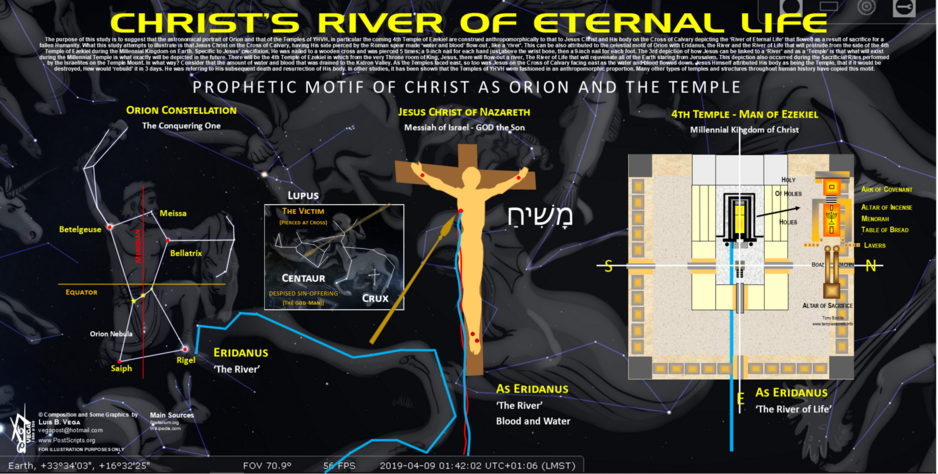 #346:
​CHRIST'S RIVER OF LIFE
ORION ASTRONOMICAL CORRELATIONS
The Possible Location of the Throne of YHVH

‘But when they came to Jesus and saw that He was already dead, they did not break His legs. Instead, one of the soldiers pierced His side with a spear, and immediately blood and water flowed out. The one who saw it has testified to this, and his testimony is true. He knows that he is telling the truth, so that you also may believe.’ – John 19:33-35

Where is the Throne of YHVH? Are there really ‘Gates’ of Heaven as the Bible suggests? Is Orion where the 3rd Heaven is situated at as many purports to be so? Where would one get this particular idea from? In studying the constellation of Orion and the various forms of the Temples of YHVH that existed to include the Tabernacle of Moses, the 4th Temple of Ezekiel and ultimately the New Jerusalem, it would seem possible and most likely probably that indeed Orion is perhaps where the ‘Majesty on High’ is situated or at least be an entry point of sorts, a Gate to Heaven. How so? Consider that over the years of study in Astro-Archeology, the recurring and most prominent constellation that has been replicated on Earth is Orion. Such a motif is always associated with the most powerful of the ‘Gods’ and thus temples, and center of power and authority on Earth. Is it because or perhaps because such a layout is mirroring the actual one that exists in Heaven?

How would any human possibly know? Well, aside that one could argue that one has had a vision, no one really would know unless they were taken there and shown. Has this been the case? Yes. One can think of Enoch, the 7th from Adam, then Isaiah that ‘saw the LORD in His Temple’, etc. Then there Daniel and the Apostle Paul. Lastly there is the Apostle John at Patmos that was specifically given glimpses from such a place. Thus, it is not out of the ordinary or the spectacular that certain humans have had the privilege of seeing such a place that does exist. The question remains, were those places all the same location and that of Orion from the other side?

The purpose of this study is to suggest that the astronomical portrait of Orion and that of the Temples of YHVH, in particular the coming 4th Temple of Ezekiel are construed anthropomorphically to that to Jesus Christ and His body on the Cross of Calvary depicting the ‘River of Eternal Life’ that flowed as a result of sacrifice for a fallen Humanity. What this study attempts to illustrate is that Jesus Christ on the Cross of Calvary, having His side pierced by the Roman spear made ‘water and blood’ flow-out, like a ‘river’. This can be also attributed to the celestial motif of Orion with Eridanus, the River and the River of Life that will protrude from the side of the 4th Temple of Ezekiel during the Millennial Kingdom on Earth. Specific to Jesus’ crucifixion, He was nailed to a wooden cross and was pierced 5 times; a 9-inch nail for each hand just above the wrist bone, then a 9-inch nail for each foot.

Release
The 5th piercing took place when the Roman Soldier took his spear to make sure Jesus was dead and from the lower rib cage, pierced Jesus’ spleen and then through the heart.  This caused the Biblical account and record of there being ‘water and blood’ that flowed out and down the body of Jesus as a result. This caused the payment for the sins of Humanity. This act and elements redeemed the fallen human race of Adam and Eve. In fact, many have pointed-out that in this imagery, it is as it was with Adam. YHVH put Adam into a deep sleep as in the ‘Sleep of Death’ and from Adam’s side Christ constructed Eve, the Bride for Adam. This amazing prophetic motif parallels the work Jesus did to secure and purchase the Bride of Christ with His blood. Jesus is now presently cleansing her with the ‘Water of the Word’ to wash her and have her be prepared for when Jesus returns for her.

This depiction can thus be cautiously paralleled to that of Orion, astronomically. In what way? Consider that Orion is legendary for being attributed the aspects of a Christ, a ‘Cosmic Christ’, but that of a Redeemer, etc. He is the champion that has the ‘hare’ underfoot that represents the adversary and all that opposes what is good, holy and righteous. Orion has many anthropomorphic characteristics that are amazing. He is the Sentinel that guards the Silver Gate and has  a ‘Torch’ of Enlightenment. He is confronting the Bull, Taurus that has captured the 7 Maidens of the Pleiades. In some depictions, Orion is fashioned with an arrow. In other depictions, it is a main of an animal that would then suggest a ‘celestial bullfight’ of sorts as a ‘cape’. What Orion then has is the famous Belt Stars, 3 in sequence that many have come to attribute to the Giza Pyramids, starting with Robert Bauval.

Bauval was the first to publicly write about it and bring attention to it using modern computer software programs. Nonetheless, purely using the concept of Astor-Archeology, it has been seen and demonstrated in other studies of Orion, that in fact most if not all of the ancient and religious temples and core of cities were also construed with such a template. This Orion layout seemed universal or coming from the same mold as it were. One fascinating study on this is called ‘The Gates of Orion’ in how the Gates of Jerusalem are construed to the composition of Orion’s ley-lines for example. Aside from the amazing fact that the main Stars all have names that are attributed to Christ and His redeeming work is amazing.

Then how Orion is associated with Christ on the Cross is that if one superimposes the Galactic Equator with the Celestial Meridian, that is relative to the position of one’s observation from Earth, the center point of this nexus intersects at Orion to form a ‘Cross’. Then spectacularly, what is coming off from the side of Orion is a ‘River’. It is called Eridanus. What is amazing about the Meridian in relation to Orion and the Celestial Equator is that prophetically it is though YHVH has given the Y axis fixed on Orion. It is then incumbent upon the observer from Earth to fix the Meridian with the Equator at Orion for such a ‘crucifixion’ motif to be depicted. It is when one focuses the ‘crosshairs’ on Jesus that one then sees Him ‘crucified’ to be saved. It was the same principle with the Bronze Snake on the ‘cross’ that one had to fix on to then be healed. Such is the case now with Jesus. One must turn and look at what He did at the Cross.

The 3rd depiction of how Jesus can be linked to a ‘River’ and as a ‘Temple’ is that what will exist during the Millennial Temple is what exactly will be depicted in the future. There will be the 4th Temple of Ezekiel in which, from the very Throne room of the King, Jesus will flow-out a River, The River of Life that will rejuvenate all of the Earth starting from Jerusalem. This depiction also occurred during the Sacrificial Rites performed by the Israelites on the Temple Mount. In what way? Consider the amount of water and blood that was drained to the Kidron Valley.

As the Temples faced east, so too was Jesus on the Cross of Calvary facing east as the water and blood flowed down. Jesus Himself attributed His body as being the Temple, that if it would be destroyed, He would ‘rebuild’ it in 3 days. He was referring to His subsequent death and resurrection of His body. In other studies, it has been shown that the Temples of YHVH were fashioned in an anthropomorphic proportion. Many other types of temples and structures throughout human history have copied this motif.

In terms of the River of Life coming from Christ’s side, the difference is that from the time of the 4th Temple to that of the New Jerusalem, there will be no need for blood anymore. Why? It is because Jesus paid once and for all the penalty of sin, which was death, Eternal Death and since the ‘wages of sin is death’, and sin has been paid for by Jesus, there is now no more need for the shedding of Blood. However, during the Millennial Kingdom, it will be allowed by Jesus as an object lesson to the Jewish Remnant and those Gentiles during that time.

Do also be aware that there is also an antithesis to all this that is Luciferian and they have inverted the meaning of such typologies as they have ascribed them to Lucifer, not Jesus Christ. For example, the River Eridanus, is called the ‘River Styx’ and is the way to the place of the dead wherein one has to pay the transporter, etc. As Lucifer seeks to pervert the motifs of YHVH, the River of Life of Christ Jesus, becomes the ‘River of Dead’ for the Luciferians. Thus, it is Lucifer that becomes the ‘Lord of the Underworld’.

However, Jesus up’s one over Lucifer in that as Jesus ‘tasted death’ for all of Humanity and resurrected from among the dead, as in Romans 14 states, Jesus is not only LORD of the living but of the dead as well. Based on the typologies of Christ on the Cross, with the water and blood flowing as if a ‘river’ and how the future Temples to include ultimately the New Jerusalem, it can be probable that in the region of Orion, somewhere lies the Temple, the very Throne of YHVH and His Christ, the man, Christ Jesus from where and whom the River of Eternal Life spring out from.
_________________________ 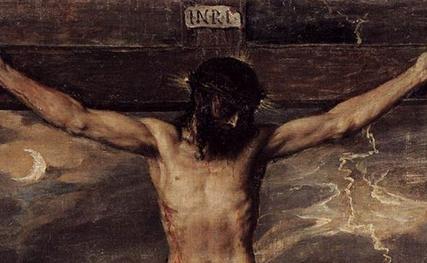