#317:
​THE YEAR OF JUBILEE
LIBERATION OF JERUSALEM
Prophetic Focal Point of the End Times

The purpose of this study is to examine the Jubilee Cycle Pattern as it pertains to the rebirth of Israel in 1948 and subsequently with the liberation of Jerusalem during the 6-Day War in 1967. The Temple Mount had not been under Jewish sovereignty since 70 AD until 1967, some 1897 years. Interestingly, it was in 1897 that the first modern Jewish Zionist Congress met to set the stage for the regathering of Jews to the Promised Land and rebirth of Israel as a nation, etc. If the liberation of Jerusalem on June 7, 1967 is the key, pivotal point in modern history related to Biblical eschatology and the End Times. If the Jubilee Cycle Pattern is valid, then perhaps one can count-off from the 1967 one that could serve as a recalibration of sorts. The reason being that allegedly, the true and correct counting-off of the Jubilee Cycles has been lost in history. It is highly doubtful as it could be to the secular, non-Jewish interests but not to those that are in the ‘know’ about such reckoning of ‘prophetic time’.

What is of prime interest to those Believers and Followers of the true Messiah of Israel, Jesus, there is excitement in that the date of the Jubilee Cycles since 1967 could possibly ascertain when the last Jubilee Cycle is to have occurred before the return of Jesus Christ, as promised. It could very well be within the 50 and 70-year span of a Biblical generation. This pattern could very well herald the conclusion of the present Church Age and the commencement of Daniel’s last Week of Years or the 70th Week from 1966. The timeline presented seeks only to illustrate that the ‘48’ years from 1967 calculates to the year 2015. Based on the Jubilee Pattern since 1966, it would have been 2015 or 5776 then when the Jubilee Year would have been proclaimed. What many are supposing is that such a cycle is heralding the eventual construction and rebuilding of the 3rd Temple that is to begin soon thereafter.

This illustration does not stipulate or project that Jesus Christ’s 2nd Coming has to occur on a Jubilee Year nor does it necessitate the Rapture of the Bride of Christ as a precursor. In Leviticus, YHVH instructed the nation of Israel to count off 49 years and on the 50th Year proclaim a Jubilee where all things reverted back to the original state and/or condition. This reset was to commence once Israel entered the Promised Land. Israel did not do that and as a result, Israel was exiled into Babylon 70 years or 10 Years of 7s prophetic weeks for the Sabbaths owed since entering the Land up until that time ~490 years. Due to the difference in Jewish calendar counts, there is dissenting views on which date is the correct count to establish a Jubilee Year; modern Gregorian dates have been nonetheless superimposed. The Jubilee is based on a Sabbatical cycle: It is a period of 49 Years, comprised of 7 years x 7 Sabbaths of Years.

Jubilee Table of Years since Christ
The following table of Jubilee Year Cycles are based off of the 1967 liberation of Jerusalem during the 6-Day War. The last digits for the Sabbatical Years are sequential in pattern from 0-9 and repeats (0,1,2,3,4,5,6,7,8,9) etc. The table shows the counting of the 49 Jubilee Year intervals backward and forwards from the benchmark year of 1967. Moreover, the 1948-1967-2015 time interval is in approximate phi ratio proportion. The table denotes first the Sabbatical Year then the Jubilee Year correspondence with the numerated counts from the 1st to 42nd.

The Jubilee Year Pattern is also apparently related to Israel’s punishment and exiles based on Ezekiel 4:1-5. The Bible states that there would be 390 years for Israel’s punishment to be completed, for example. This time was also alluded to by Jesus Christ during His Olivet Discourse that stipulated a gap and future fulfillment to complete Daniel’s 70th Week of Years. The key prophetic event would be the Abomination of Desolation set up in the Temple Mount by the AntiChrist. Many believe that as it pertained to the coming 3rd Temple, the groundwork was laid in 2018. This is based on the following mathematical computations.

If 1413/4* BC is when Israel entered the Promised Land, then 70 Jubilees allotted equals the following.

What is astronomically significant is that in 2018, the Central Blood Moon occurred directly over Jerusalem’s Temple Mount. This Blood Moon was part of a Triad of 3 consecutive Blood Moons. What was potentially significant about the Triad was that it was positioned in the ‘midst’ of the 7-year timespan in-between 2 Central Bull’s Eye Blood Moons of 2011 and 2018.This possible prophetic event is what ties the year of 2011 when 7 years prior to 2018 the Central Blood Moon, which is referred to as the Bull’s Eye Moon.

The questions remains, could the recalibration of the Jubilee Year Cycle Pattern since 1966 mark the when the possibly the end of the Church Age is to occur? Could this very same pattern also suggest or allude to when the ‘beginning’ of Daniel’s 70th Week of Years or the Tribulation Period thus commence? Regardless of speculation, many End Times researchers are amazed at just how many significant prophetic events are occurring presently and appear to be signaling its approach.
_______________________________ 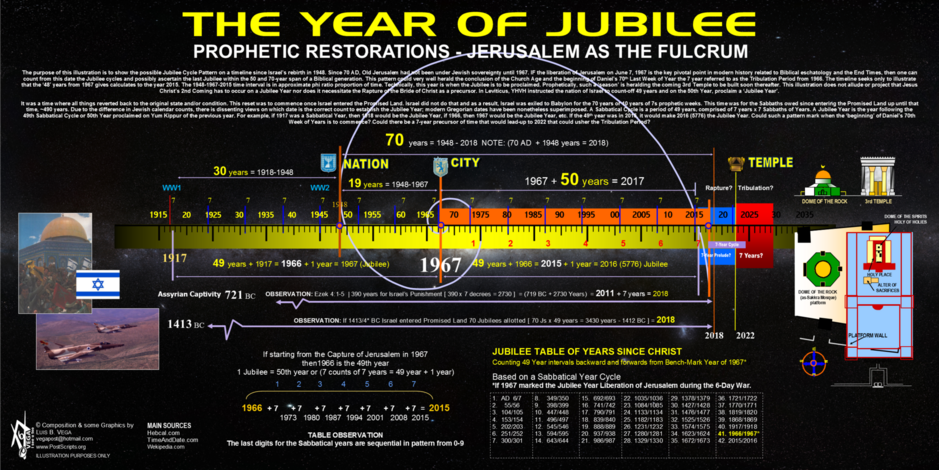 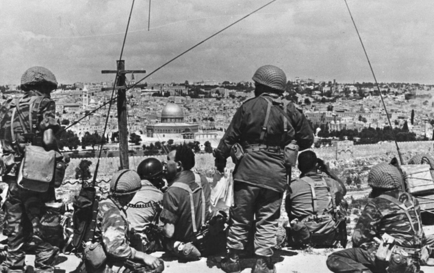