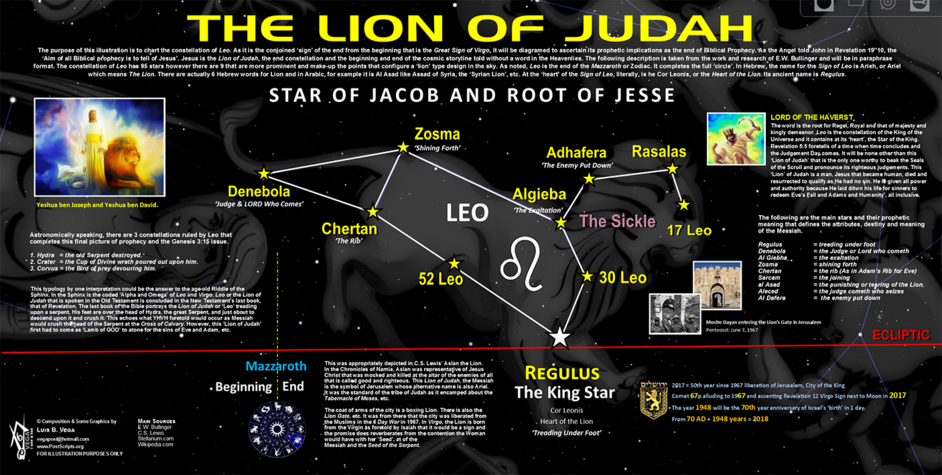 #263:
LION OF JUDAH
CONSTELLATION OF LEO
Astronomical Definitions of the Prophetic End

The purpose of this study is to briefly chart the Constellation of Leo. As it is the conjoined ‘Sign’ of the End from the Beginning that is the Great Sign of Virgo, it will be diagramed to ascertain its Prophetic Implications as the end of Biblical Prophecy. As the Angel told John in Revelation 19:10, the ‘Aim of all Biblical Prophecy is to tell of Jesus’. Jesus is the Lion of Judah, the end Constellation and the Beginning and End of the Cosmic Storyline told without a word in the Heavenlies. The following Astronomical Highlights of the description of Leo are taken from the work and research of E.W. Bullinger and will be in paraphrase format.

The Constellation of Leo has 95 Stars however there are 9 that are more prominent and make-up the points that configure a ‘Lion’ type design in the Sky. As noted, Leo is the End of the Mazzaroth or Zodiac. It completes the full ‘circle’. In Hebrew, the Name for the Sign of Leo is Arieh, or Ariel which means The Lion. There are actually 6 Hebrew Words for Lion and in Arabic, for example it is Al Asad like Assad of Syria, the ‘Syrian Lion’, etc. At the ‘Heart’ of the Sign of Leo, literally, is the Cor Leonis, or the Heart of the Lion. Its Ancient Name is Regulus. The word is the root for Regel, Royal and that of Majesty and Kingly Demeanor.

Leo is the Constellation of the King of the Universe and it contains at its ‘Heart’, the Star of the King. Revelation 5:5 foretells of a time when time concludes, and the Judgement Day comes. It will be none other than this ‘Lion of Judah’ that is the only one worthy to beak the Seals of the Scroll and pronounce its Righteous Judgements. This ‘Lion’ of Judah is a Man, Jesus that became Human, Died and Resurrected to qualify as He had no Sin. He is given all Power and Authority because He laid down His Life for Sinners to redeem Eve’s Fall and Adams and Humanity’, all inclusive. Astronomically speaking, there are 3 Constellations ruled by Leo that completes this ‘Final Picture of Prophecy’ and the Genesis 3:15 issue.

The following are the main Stars and their Prophetic Meaning that defines the attributes, destiny and meaning of the Messiah.

This was appropriately depicted in C.S. Lewis’ Aslan the Lion. In the Chronicles of Narnia, Aslan was representative of Jesus Christ that was mocked and killed at the Altar of the Enemies of all that is called Good and Righteous. This Lion of Judah, the Messiah is the Symbol of Jerusalem whose Alternative Name is also Ariel. It was the Standard of the Tribe of Judah as it encamped about the Tabernacle of Moses, etc.

The Coat of Arms of the city is a Boxing Lion. There is also the Lion Gate, etc. It was from there that the city was liberated from the Muslims in the 6-Day War in 1967.  In Virgo, the Lion is born from the Virgin as foretold by Isaiah that it would be a Sign and the Promise reverberates from the contention the Woman would have with her ‘Seed’, at of the Messiah and the Seed of the Serpent. This Typology by one interpretation could be the answer to the age-old Riddle of the Sphinx. In the Sphinx is the coded ‘Alpha and Omega’ of Leo and Virgo.

Leo or the Lion of Judah that is spoken in the Old Testament is concluded in the New Testament’s last book, that of Revelation. The last book of the Bible portrays the Lion of Judah or ‘Leo’ treading upon a Serpent, His feet are over the Head of Hydra, the Great Serpent, and just about to descend upon it and crush it. This echoes what YHVH foretold would occur as Messiah would crush the head of the Serpent at the Cross of Calvary. However, this ‘Lion of Judah’ first had to come as ‘Lamb of GOD’ to atone for the Sins of Eve and Adam, etc.
_______________________