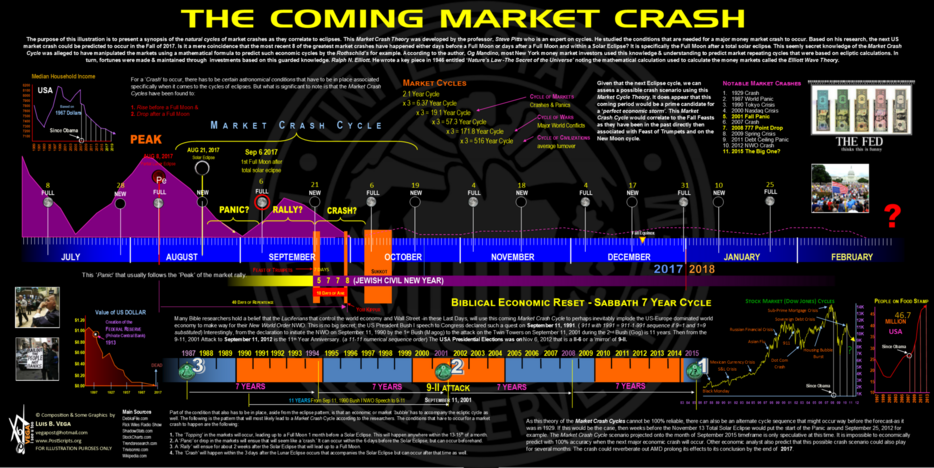 by Luis B. Vega
for PostScripts News (PSN) | www.PostScripts.org
EMAIL: vegapost@hotmail.com
​
‘Do not lay-up for yourselves Treasures on Earth, where Moth and Rust consume and where Thieves break-in and Steal, but lay-up for yourselves Treasures in Heaven, where neither Moth nor Rust consumes and where Thieves do not break-in and steal. For where your Treasure is, there will your Heart be also…No one can serve 2 Masters; for either he will Hate the one and Love the other, or he will be Devoted to the one and Despise the other. You cannot Serve YHVH and Mammon’. -Matthew 6:19-24

The purpose of this study is to show the Pattern of the 7-7-7 Year Countdown to the Great Reset that one surmises will start the Mark of the Beast AntiChrist Financial Grid System. It will encompass the whole World’s Financial Markets as the Currencies will go Digital. The Block-Chain Foundation is being staged by a well-orchestrated Cabal that have Generational Magic Spells over their Money. Their Seal is imprinted even in the U.S. Reverse Side of the Dollar Bill, etc.

It serves as a Talisman and an Homage to their God of Money, or Mammon, Mercury. The God Mercury is the Patron Deity of Money, Medicine, Media, and Thieves. Why one is focusing on this 7-7-7 Year Pattern since 2001, in particular is because this coming one will be the ‘Big One’, as they say. It deals with the World Economic Forum’s WEF Great Reset that will merge Man with Machine. It is part of what they call the 4th Great Industrial Revolution wherein, the Biometric Body will merge and be Digitized at the DNA level. That is what COVID has been and will be still all about.

What one wishes to point out is that this 7-7-7 Year Countdown is based on the Biblical Year of Release that the 7th Year denotes and is observed. It is supposed to be a Year of Cancelling Debts and Setting the Captives Free. But contrary to the Laws of Lucifer, the Opposite Effect is in Play. Which each Orchestrated Crash, the Common Man’s Civil Liberties are further Restricted and Abolished. It is about a Wealth Transfer and a Control Grid in which all Humans will be subjected to. And?

Those that control the Money, will control You. So, one’s Point is that this coming Market Crash of 2022, around the Rosh HaShanah Time-Frame will constitute the beginning of the Conversion of all Nations’ Money Supply to do away with Paper Currency. And that one predicts that the Numerology will follow as with the previous Luciferian Signaling of their Encrypted Language using 7’s. Watch for the Numbers to have Factors of 7s within their Points System. It is a Signature and how they are Signaling to each other of who is doing it. This is of course still to come to pass, if the prior Crash Patterns are to follow.

Gods of Mammon
Is it no coincidence that in the USA, that is currently the World Financial Leader started with a Financial Collage? When? The Financial Crisis of 1791 to 1792 was the 1st U.S. Stock Market Crash. The USA started its Financial Money Scheme by way of a Crash of its New Currency thanks to the Coin Act of 1792 and it will end in a Monetary Crash, 33 Sabbath Cycles of 7 Years later. See Articles at the End Notes. Thus, the following will be the Evidence of these former 7-7-7 Year Crashes that incorporate 7’s in Numbering.

The Dow Jones industrial average dropped 684.81 Points, or 7 Percent, on the 1st Day of Trading since the September 11 U.S. Government Terrorist Attacks on the World Trade Center and the Pentagon. The Dow’s plunge was the worst Point Loss in History up to that Point in Time.

September 30, 2008 = 1st of Tishrei, 5769
The Stock Market Crash of 2008 occurred on September 29, 2008. The Dow Jones Industrial Average fell by 777 Points in Intraday Trading. This was a Reaction for the U.S. Congress not initially passing the Bank Bailout Bill in the Trillions of Dollars charged to U.S. Tax Payers, etc.

Based on the Orchestrated Kabbalistic Scheming of the U.S. and World Stock Markets, the coming Crash Flash will involve 7’s in some way. It will occur on Rosh HaShanah, the Jewish Civil New Year or within a few Days.

This 21-Year Countdown since 2001 is a 7-7-7 Code that will be used as an Excuse for the Luciferians to implement their New Digital Currencies and Initiate their Great Reset It will be a Prelude and Preparation for the coming Mark of the Beast Monetary, Social, Medical and Monitoring ‘Big Brother’ Grid.

2020 Stock Market Crash: February 24, 2020
The S&P 500 index dropped 33%. The Crash was part of a worldwide Orchestrated Recession caused by the COVID-19 Lock-Downs. It has been the largest Wealth Transfer of the Middle Class Wealth to Big-Box Corporations. The World Elites have transferred the Power of the Supply Chains, Goods and Services to become the ‘Company Store’ of the World controlled by Psychopath Pedophiles.

3-There have been 10 Sabbath Cycles since Israel returned to the Promised Land. Since 1952, it has now been 70 Years.

4-The Queen of England Died also in 2022, marking her Platinum Jubilee of a 70-Year Reign.

5-If the Convergence of this 70th Year Shemitah is valid, many are suggesting then that the 70th Week of Daniel could very well be at the Door within the next 7-Year Sabbath Cycle.

These Masters of Mammon, whose ‘God’ is Mercury will succeed in establishing a Worldwide Digital Financial Network. And? All Bank Accounts will be Centralized and owned by the various Federal Governments. However, such have partnered with the Central Banks that are not Federal or Banks, such as the Federal Reserve that controls all the Money Supply and Mechanisms for Printing and Releasing Money and setting Interest Rates. Is not a Centralization of Banking more Convenient? Buying with Touchless Scanning and being virtually Identify Theft Proof?

Sure, if those who Control were Benevolent, God-Fearing and Law-Abiding People. But they are not. They are Eugenicist, Narcissists, Pedophiles, Globalists and above all Luciferians. They seek to dominate the World and Rule and Control all People. They do not believe in Democracy but Population Control, Reproduction Rights or Abortions and Reprobate Lifestyles that fly in the Face of what the Creator YHVH Designed and Prescribed for Humanity to abide by. The issue is Civil Liberties, Privacy and Thought and Behavioral Control.

The coming Financial Grid will be based on a China-Like Social Credit Score of ‘Right Thinking’ and ‘Right Behavior’. This flees contrary to the Disposition that Humanity has been given Free Will and at its core Tenets, is a Free Soul. Take for example the Canadian Truckers who did not want to get the Poison Kill-Shot of that Bio-Weaponized COVID-19 Shots. The Bastard Cuban Trudeau called them ‘Nazi Terrorists’. And with that, their Law kicked-in in making them all now ‘Enemies of the State’. And? It is and will be the Governments, on behalf of the Corporations, either Pharmaceuticals, Agricultural, Manufacturers, etc., that will dictate now who is a ‘Domestic Terrorist’.

So, Trudeau who colored his Face Black on several occasions and who is the one that actually has Nazis in his Government orders the Digital Bank Accounts of all the Truckers to be frozen, shut down. They could not ‘Buy or Sell’ any of their Livelihoods to basically starve them into their Luciferian Order. This is a Crime against Humanity and Trudeau should be in Shackles. He and others like him are Enemies of the People and Friends of the State. And this Luciferian Cabal is also the Masters of the Medicine and Media Corporations that set the Narratives of what is deemed ‘News’ and what can and cannot be Aired.

​Such a Cabal that even has their Seal on the U.S. Dollar Bill, gloat at the Misery and Despair caused by their Thievery around the World. Even though their Scheming and Money Changing will succeed and is and will, for the Short Term, it will end 1 Day. This will come about when Jesus returns and once again will overturn the Money Changer’s Tables as He cleanses the Temple and the Earth of them. And true to the Terms of Justice, Jesus will require a 7-Fold Restitution of all that Lucifer and his Money Minions have stolen from the Righteous and Up-Right.

Is all this ‘Conspiracy’? Yes. Consider how the Georgia Guide Stones that commemorated Lucifer’s 10 Commandments were ‘Smashed’ on the Day, that Moses Smashed the 10 Commandments at Sinai, according to the Rabbinical Calendar. And? What happened? It was because the Jews had forsaken YHVH already, that right after seeing the most Incredible Miracles in Human History: The Deliverance from Egypt with the 10 Judgments, the Parting of the Red Sea and the giving of Water from the Rock, etc., they rather Worshiped the Stock Market Golden Bull. After Moses ‘delayed’ and was up with YHVH for 40 Days, he came down to see the Jews in Revelry and Debauchery centered around the Golden Bull.

They made Aaron fashion a Golden Calf or Bull as in the Bull Market to Worship it instead. It became their God of Mammon. What happened next? The Golden Bull was ‘Slaughtered’ or Killed and Smelted-Down. Moses mixed it with the Bitter Water from the Spring that ran down the Mountain. Their Stock Market ‘Crashed’. Thus, one suspects that the Jews, the ones that likewise ‘Worship’ the Golden Calf, that is actually just outside of Wall Street, having ordered the Smashing of their Luciferian 10 Commandments, will now ‘Slaughter’ their Golden Wall Street Bull. In this Crash, look for 7’s in their Point Systems. Selah
____________________ 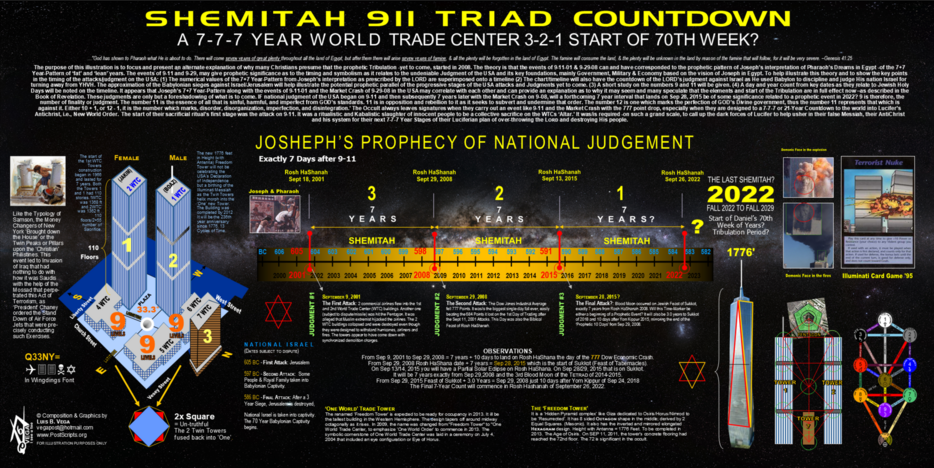