#328:
​THE TRUMP 'DECREES'
PROPHETIC REDEDICATION PATTERNS
The Preparations for the Coming 3rd Temple

In light of the 70th year anniversary of Israel’s independence since 1948 and the USA Embassy move to Jerusalem, this study wanted to look at the possible prophetic implications. For example, American media hosts like Jeanine Pirro said that, ‘President Donald Trump has fulfilled biblical prophecy by moving the U.S. Embassy in Israel from Tel Aviv to Jerusalem…like King Cyrus before him, fulfilled the Biblical prophecy…’ To have this event converge on the 70th year anniversary of Israel’s rebirth, as a nation in 1948 is what many believe is the fulfillment of the Fig Tree Generation or will be.

In short, it would make Donald Trump, the U.S. President forever memorialized in the annals of Jewish History, which is phenomenal. Many do see the designation of the choosing of Cyrus the Great, a great Persian no less with that of Trump. Both are now seen as being called by YHVH to help restore Israel. To this end even the Sanhedrin has issued 1/2 Shekel Temple Coins with both men’s facades to commemorate a ‘decree’ over Jerusalem.

The linkage to both men is the 70-year numerical coefficient. It was at the 70th year marker that Cyrus the Great issued the decree to liberate the Jewish Captives. Cyrus decreed to have the Jews all return to restore Judah (Israel), Jerusalem and the Temple. In similar ‘prophetic’ fashion, Trump decreed the move of the U.S. Embassy to Jerusalem was commemorated at the 70th year marker, to the day of Israel’s Independence. Likewise, it would appear that such a move may be fulfilling a major prophetic milestone of YHVH' prophetic timetable.

It is concerning the redemption of Israel, the City and eventually the Temple. Will Donald Trump’s decree reach that ‘prophetic’ degree concerning the building of the 3rd Temple in some way? The religious Jews and the Nascent Sanhedrin believe so. Consider that his expertise is real estate and building projects; what 2 better skills of knowledge to have for such a purpose perhaps. This is despite his many flaws as Cyrus the Great and King David had. As the Biblical saying goes, 'GOD qualifies the called, he doesn't call the qualified'. Of such men’s name, King David was a murderer, an adulterer and he even turned to the enemies of Israel, the Philistines.

The Savior of Israel
Donald Trump has had a similar bad and long line of sins in his past with derogatory words said against women, immigrants and nations, etc. Out of all the other U.S. President; Trump has been like none other in espousing the cause of Evangelical Christianity and support for Israel. Trump has done more for the Evangelical community than all prior U.S. Presidential Administrations combined. He has kept his word in this regard which most would not have. Yet, he is beloved by Israel at least as much as he is loathed in the USA by at least half the nation that is divided down the middle on almost every issue now. In fact, according to Newt Gingrich 'he has not been initiated' into the Luciferian Secret Societies that run Washington DC and the world. Donald is not apparently under the total control of the Luciferian Deep State that runs this world currently.

The epic ‘Decree’ by Trump recognizing Jerusalem as Israel’s Eternal Capital was commemorated Israel's 70th year. This independence day was reckoned by the Gentile calendar, much like Cyrus the Great had contributed to the blessing of Israel which ultimately led to the completion of the 2nd Temple. No doubt to Biblical scholar, this step is part of the present sequential restoration of Israel and Jerusalem. It will eventually pave the way for the restoration of the 3rd Temple. What the move of the U.S. Embassy to Jerusalem by Donald Trump does it that it now legitimizes the construction of the 3rd Temple, whenever that will be.

It was a point of pride for the Gentile Church of whom many Evangelical Pastors have said of Israel that 'they are our best friends' and above all, brothers in arms and benefactors of Israel's Covenant per Abraham. It was rather unique being that it was an ‘American’ ceremonial event that it was opened in prayer and closed by 2 Evangelical Pastors that support Israel. The first Pastor, Robert Jeffress did close by using the Name of Jesus, John Hagee who gave the Benediction did not. In the modern regathering process of Israel, it has been 1 nation among many that most has aided Israel in her hours of need, in 1948, 1967, 1973 and now with Jerusalem.

It is a measure of how the blessings, Israel has been to the Nations, such a nation as the USA and others that came to faith in the King, Jesus have in turn now been able to bless Israel where it most counts. This is also despite the many sins of America that is like a ‘Donald Trump’. Yet, like King David and Cyrus the Great, they recognized their calling and place in repentance and reverence for the Almighty directives concerning Israel.

How the recent events pertinent to President Trump’s ‘Decree’ about moving the U.S. Embassy to Jerusalem is tied to prophecy is that it nearly mirrors that of Cyrus the Great. The 3 Wave Restoration Patterns since Babylon appear to be repeating in modern times with respect to Israel. As there was a 70-year Exile for Judah or ‘Israel’, there was a mirrored 70-year span of time that it took to completely have the remaining Exiles trickle back to Judah. The reaffirmation of Cyrus’ Royal Decree is what has now occurred for Israel because of President Trump.

The Gentile Blessing to Israel
As to the parallel timelines, if one puts the 3 waves or sieges of 20 years that led to the 50 years thereafter to ultimately end with Cyrus’ decree, it astonishing mirrors what has happened since 1948 for Israel. The pattern is identical, and Trump is at the culminating point. There is a similar span of 20 years from the 1947 U.N. Partition Plan to 1967 liberation of Jerusalem. Then 50 years to 2017 and then the 70th year university in 2018. Such a gentile blessing that the USA has been to Israel will not last for long as increasingly all the Nations will all one day come against Jerusalem, perhaps even the USA with another President and people that ‘know not Joseph or the GOD of Abram’.

Consider the dire pattern also that as YHVH used Babylon to discipline and lead captive Judah, so to was Babylon then judged shortly after the 70th year. Will the USA thus also follow this pattern that as she has been ‘designed’ and used to reconstitute Israel, here purpose will have been fulfilled and then she too will be judged like Babylon? In comparison, the coming AntiChrist will not be sanctioning just a mere Embassy but the Daily Sacrifices and the 3rd Temple. The AntiChrist will be the 'Great One' that will be accepted as the Messiah, even beyond the love affair of the likes of Donald Trump that will pale in comparison.

This disposition of Israel is a sad commentary really of its spiritual famine. Israel’s sin has been to rely on powerful men like a Cyrus the Great, a Donald Trump and their empires for its protection and security. The national Jewish Nation has not learned that their only hope, security and true protection comes from their GOD, YHVH. Israel loses sight of the fact that it is the only Nation on Earth that has a Covenant or ‘Pact’ with the Creator Himself. For this very reason, the Jews will never be nor can be totally destroyed.

No other Nation as the USA can say this or has this condition or guarantee. Yet, it will play into the hands of Lucifer as his soon coming AntiChrist will offer national Israel just that. Will it be no different now as it had been with Israel then? No, thus the need for Daniel’s 70th Week of Years. What for? One sees the striking parallel of how in the case of the prophet Daniel, his inquiry of how long the Exiles would stay ‘Captives’ was hindered by the Prince of Persia. This is the Fallen Angel that govern the spiritual affairs of such a land, Iran presently. Is it no wonder why there is such contention coming out of ancient Persia?

It is echoing the contention there is to prayer of how it is shown through the prayer of Daniel. Daniel’s prayer was delayed but eventually answered and thus fulfilled the demise of such evil. It is also amazing how again; the numerical coefficient of ‘70’ is reiterated over in prophetic terms, even down to the end of Israel’s history. Before YHVH concludes such unfinished business with Israel, Israel will extol such a man due to deception much like Eve. The difference is that this coming ‘Savior’ will not only be that for Israel but for the entire world. The Bible says that people will say of this coming Prince, ‘Who is like him or who can be compared to him'? He will establish his 'tent' in the Beautiful Land and take possession of the earthly Hill of YHVH, Jerusalem itself.

He will be as a ‘Man of Peace’ initially to Israel's detriment and in part blindness for she shall still trust in the alliances of men rather than turn to YHVH as a nation and be healed of such blindness. Such spiritual blindness will only be lifted when Israel will see ‘Him whom they have pierced’ as they turn, out of now other choice toward the Face of Jesus and say, 'blessed is He that comes in the Name of YHVH.'

To reiterate, this study suggests that the current ‘Decree’ by President Trump and dedication of the U.S. Embassy that was performed on May 14, 2018 in Jerusalem occurred on the 70th year anniversary of Israel being rebirthed in 1948 and returning from the Exile since 70 AD. This 70-year marker also mirrors prophetically the timeline that Israel returned to rededicate Jerusalem after the Exile from Babylon, also at an end to a 70-year time marker. If the pattern is prophetic, what will be suggested is that the 3rd Temple is to follow fairly soon, within 1-3 years. The study also suggests that the time markers for each rededication approximately follows a phi ratio prophetic time pattern. Such a phi ratio pattern of time is mirrored with that of the Tetrad Blood Moon sequences of 1949-50, 1967-68, 2014-15 and that perhaps Daniel’s 70th Week of Years is about to start.
______________________ 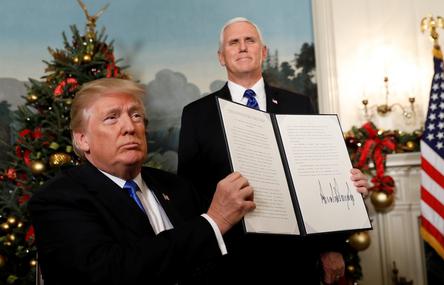 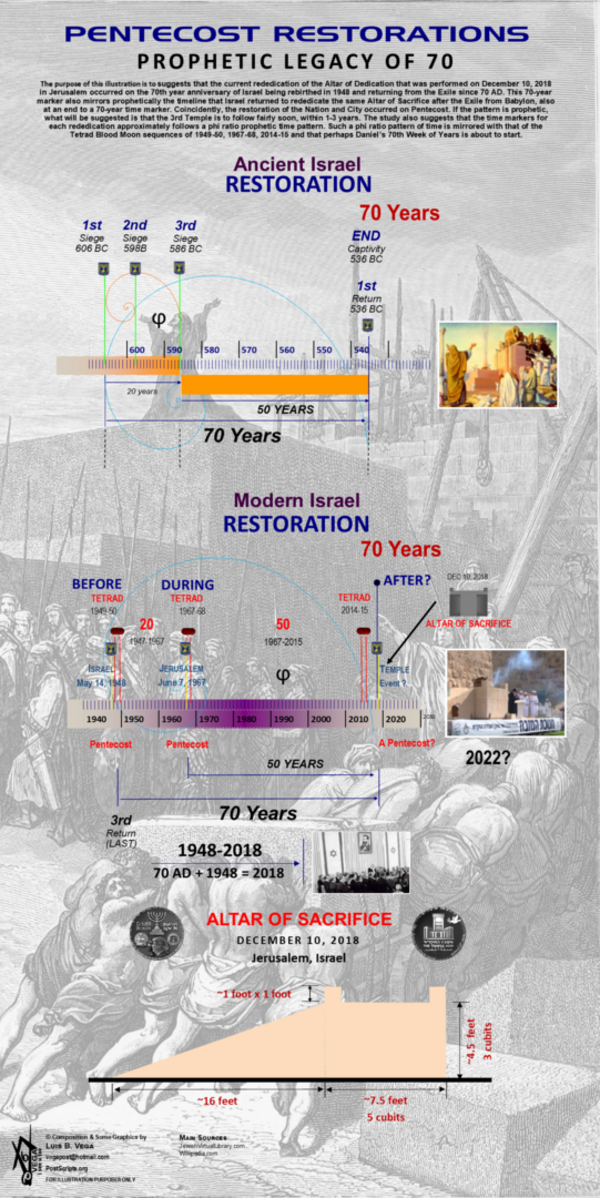