#621:
MESSIER 87 BLACK HOLE
IN THE SIGN OF PROPHECY
Piercing Time and Space

by Luis B. Vega
for PostScripts News (PSN) | www.PostScripts.org
EMAIL: vegapost@hotmail.com
​
‘Then the Angel told me to write, Blessed are those who are Invited to the Marriage Supper of the Lamb. And he said to me, These are the True Words of GOD. So I fell at his Feet to worship him. But he told me, Do not do that! I am a Fellow Servant with you and your Brothers who rely on the Testimony of Jesus. Worship GOD! For the Testimony of Jesus is the Spirit Of Prophecy. Then I saw Heaven Standing Open, and there before me was a White Horse. And its Rider is called Faithful and True. With Righteousness He Judges and Wages War’. – Revelation 19:9-11

The purpose of this study is to correlate the May 12, 2022 capture of the 2nd Black Hole Image ever obtained from the Center of the Milky Way Galaxy with that of the Revelation 12 Sign. Why? First, one believes Virgo is the Sign of Prophecy, Biblically Speaking. Second, it was in Virgo that the 1st ever Computer Image of a Black Hole was captured. Back in 2019, that 1st ever Image of a Black Hole was captured in the Galaxy named Messier 87, in Virgo. It was just directly in front of the ‘Face’ of Virgo, when applying Anthropomorphic Features using the Stars Alignments of the Sign. It was as if the Black Hole, which is an ‘Opening’ in Space and Time, became as a `Door Motif', set before Virgo’s very Eyes to ponder.

When this Astronomical and Historic Day occurred back in 2019, one asked, is this or will this be the Rapture Open Door? Is this a Piercing of the Heavens? Will the King of Glory, Jesus come through for His Virgin, the Bride of Christ soon after? As one adamantly argues, Signs are not the Event themselves. One understood that the appearing of the Black Hole, in direct line with the Motif of Virgo’s ‘Face’ was not the occasion for the Rapture. But what if that Black Hole in 2019 announced the Year of the Rapture event to come? How so? One thought, when the next Black Hole is captured.

To reiterate, the 1st Image ever taken of a Black Hole occurred where? In Virgo, the Sign of Prophecy. At that time, many saw how the inference to the Black Hole, as a ‘Opening’ in the Heavens was as a Door. Is not what the Apostle Paul describes the Rapture event, having Physics-Defying Supernatural Properties? It did give a Prophetic Echo of the Philadelphian Promise that Jesus is ‘set’ or put an Open Door in front of the Philadelphian Type of Believers and Followers of Jesus. It was a Breakthrough Discovery made by the Researchers @ehtelescope. They captured the Image in the center of the Messier 87’s (M87) Galaxy. It is a Super-Massive Black Hole in the Virgo Constellation, 55 Million Light- Years from Earth. The Computer Generated Photo was taken in April of 2019. Now, it so happens that on May 12, 2022, it was reported that a 2nd Black Hole Image has been obtained. Where? At the Center of the Milky Way Galaxy. The Image was captured as a Computer Digitally Composed Image.

A Star is Born
It has now been just over 3 Years since the 1st Image was taken in the Constellation of Virgo. Thus, the Question has circled back. Will the Year Assertion, one had back in 2019 come true then in 2022? In that it may indeed signal the Year of the Rapture? It is based purely on Personal Speculative in that the Year that the next Capture of a Black Hole would be the ‘Rapture Year. It might sound absurd but consider the Biblical Meaning of the Sign of Virgo and just how rare such Images are. The point is that such Events that one is attempting to link are not, ‘out of the ordinary’. Perhaps that is what the initial Discovery was to point to? It is purely Conjecture but consider the following Evidence and Day Counts that will be presented.

The Sign of Virgo is very unique Astronomically and for its Biblical Overtones and Inferences directly related to Prophetic Motifs. The Sign of Virgo starts out as the 1st Sign in the Storyline of the Mazzaroth or the Zodiac. Ultimately the Storyline is about Jesus and His Plan of Redemption for a Fallen Humanity. Her Main Stars ‘speak’ of Prophecy, Biblical Prophecy. Psalm 19:1-9 rightly declares as does the Apostle Paul in Romans that Stars ‘Speak’, regarding the Sun, Moon and Stars. The question remains, what is that prophecy? What is ‘She’ saying? Was the Revelation 12 Sign a Countdown? Does the Black Hole imply an ‘Open Door’?

Perhaps it is that something will be ‘birthed’ or ‘harvested’ in the whole context of the Virgo Sign Typology or perhaps the Rapture event itself. When? In the Year when the next Black Hole Image is to be captured. Perhaps. For example, in particular, the Star in Virgo named Porrima means the ‘Goddess or Maiden of Prophecy’. How appropriate is that in light of the frenzy that was the Revelation 12 Virgo Sign. In the Years leading up to September 23, 2017, there were many Prophecy Watchers that were convinced, the Typology of the Sun, Moon and the Stars, converging to depict the Revelation 12 Sign, meant that the Rapture had arrived. It would appear that YHVH was ‘confirming’ the notion that indeed, the Virgo Sign was and is Prophetic.

Many Christians as well as non-Christians alike were asking, were the Astronomical Convergences in Virgo at that time a true Sign that was and is Prophetic? One argued and still that, yes, it was and still is. Although one did not ascribe to the Sign being the Event, it was a Forewarning of what is soon to still take place. And that is? The Rapture, the Open Door, the piercing of Time and Space, just like a Black Hole. Now one is not saying that at the Rapture, a Black Hole will mysteriously appear and ‘swallow-up’ all the Believers and Followers of Jesus. But sure enough, the Resurrection-Rapture event, as described in the Bible, will be a Super-Natural Event, amazingly. It will defy the Natural Laws of Gravity, if one believes in Gravity and Physics, etc.

As to the Stars Speaking in Virgo or any other of the Signs? It would appear as if Virgo herself is ‘Testifying’ that she is divulging ‘Prophecy’ by way of her Stars coming into Conjunction with the Sun, Moon and the Stars. The Virgo Sign typifies as being a Prophetic Motif for: Mary, Israel, and the ‘Church’ or the reflected glory of the Bride of Christ, etc. The Sign may very well have broadcasted the Rapture Season that was a prelude to the Virgo Sign Astronomically Occurring in September of 2017.

Stars Speak
The Description of the Main Stars of Virgo convey the Theme from Genesis 3:15, as that was the Time that the 1st Prophecy was ever given to Mankind and perhaps its last. The Following will be a brief description of the meaning of the Main Stars attributed to the Sign of Prophecy in Virgo. If one reads their meanings, one will understand why one strongly suggests this Sign is the Sign of Prophecy. And this is why one is linking it to the Black Hole Events.

SPICA
= Ears of Grain
Spica is the 15th brightest Star and echoes of Genesis 3:15, the Seed of the Woman.

ZAVIJAVA
= From Al Zawiah, the Corner,
This was the Star Einstein used during the Solar Eclipse of September 21, 1922, which fell close to it, to determine the Speed of Light in Space.

AL ZAWIAH
= Or Zaniah, meaning, The Corner
And just to the West of this Star is the Point of the Autumnal Equinox is ascertained.

VINDEMIATRIX
= Al Mureddin
Who Shall Have Dominion ‘Who Shall Come Down’ Psalm 72:8
A Chaldean Word which means, The Son, or Branch, Who Comes.

SYRMA
= Arabian translation of the Syntaxis
As in being in the h-imar, or ‘Skirt’, or Train of the Wedding Garment.

It is the Astronomical Storyline of the Contention between the Seed of the Woman and the Seed of the Serpent. Both their Christs will be born of Human Flesh and by Supernatural Means. They met once already, and at Jesus’ 1st Appearance, The Seed of the Woman crushed the Head of Lucifer at the Cross of Calvary. However by using Death to Destroy Death, Jesus died, his Heel was ‘Bruised’. However, because He was Sinless, Death could not keep Jesus in the Grave and Resurrected. The Conclusion and total Conquest over the Serpent Seed will occur and Jesus’ 2nd Appearance.

Consider also this Numerical Day Count. It was back on April 10, 2019 that the 1st Black Hole Image was captured. It was understood that the Revelation 12 Sign had a Prophetic 'Shelf Life’ of 1260 Days. How so? It is understood by some that the actual occurrence of the Sign will happen at the Mid-Point of the 7-Year Tribulation Period or Daniel’s 70th Week of Years. This Great Sign delineates the 2 Halves of the Last Sabbath Cycle to end with the literal and physical return of Jesus. But one adds this 160 Day count from April 10, 2019, the End Date, amazingly occurs on the Fall Equinox of 2022.

Thus, one is convinced that the Sign of Virgo is amazing in how the meaning of her Main Stars convey Biblical Prophecy. It is as if the ‘Virgin’ Prophetess is celestially ‘speaking’ about this very Prophecy. What? The Rapture. The Open Door, etc. It is as if Christ is answering the arguments and questions of so many regarding the Great Sign of Virgo, ‘is it prophetic?’ Will the Year 2022, what remains of it, thus become the Season that indeed Jesus, the Rider on the White Horse is to come?

Will 2022 by the Year that Jesus pierces through Time and Space, as in a Black Hole Typology to open-up Heaven with and usher his Bride to the Marriage Supper of the Lamb. And as He comes forth to wage War on the Inhabitants on Earth for their Evil? All this is very Romantic, in trying to link the Sign with the Black Hole Images. But consider what the Sign of Virgo means in terms of its Stars and Biblical Prophecy. And the Aim of Prophecy is to Testify of Jesus. And perhaps of His Return for His ‘Bride’, Virgo.
______________________

We got it! Astronomers reveal first image of the black hole at the heart of galaxy
https://www.nsf.gov/news/news_summ.jsp?cntn_id=305148 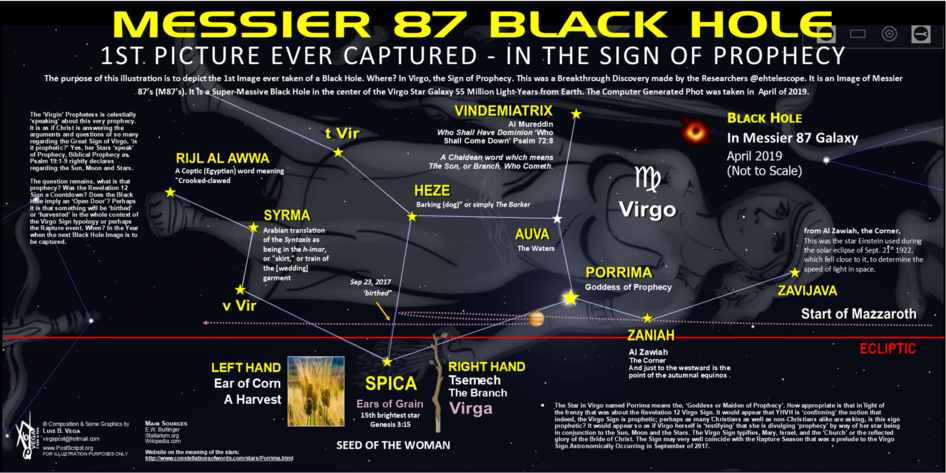