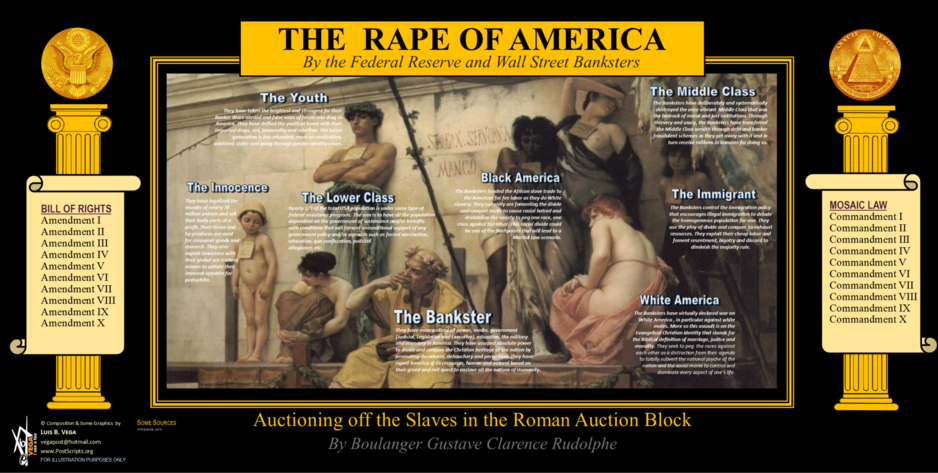 #138:
​THE RAPE OF AMERICA
SLAVES IN THE ROMAN AUCTION BLOCK
By the Federal Reserve and Wall Street Banksters

The following is a parody of the classical painting by Boulanger Gustave Clarence Rudolphe entitled the The Slave Market. It will be compared to the miserable state of affairs America finds herself in now in this last generation. The painting will be suggesting that the depiction speaks volumes of the specific conditions and ills of a sick society that has been compromised, ‘enslaved’ by the operatives of the Federal Reserve and Wall Street Banksters policies. The following are the main characters that will be summarized in the illustration of the same.

Black America
The Banksters funded the African slave trade to the Americas for fee labor as they do with White slavery around the world. They currently are fomenting the divide and conquer tactic to cause racial hatred and destabilize the society to peg one race, one class against the other. This racial divide could be one of the flashpoints that will lead to a Martial Law scenario.

The Lower Class
Nearly 1/3 of the total USA population is under some type of federal assistance program. The aim is to have all the population dependent on the government of sustenance and/or benefits with conditions that will foment unconditional support of any government policy and/or agendas such as forced vaccination, relocation, gun confiscation, political allegiance, etc.

The Youth
They have taken the brightest and strongest for their Banker Wars abroad and false wars of terror and drug in America. They have defiled the youth at home with their imported drugs, sex, immorality and rebellion. The latest generation is less educated, more on medication, addicted, sicker and going through gender identity crises.

The Innocence
They have legalized the murder of nearly 70 million unborn and sell their body parts at a profit. Their tissue and by-products are used for consumer goods and research .They also exploit innocence with their global sex trade of minors to satiate their immoral appetite for pedophilia.

The Immigrant
The Banksters control the immigration policy that encourages illegal immigration to delude the homogeneous population for one. They use the plot of divide and conquer to exhaust resources. They exploit their cheap labor and foment resentment, bigotry and discord to diminish the majority rule.

The cabal of globalized agent provocateurs that have taken over the government have stripped the fundamental rights guaranteed by the Republic based on the moral and judicial law of YHVH. As a result, the nation has become amoral, tyrannical and has cheapened the value of human worth and value. Moral relativism has only led to an orchestrated division, disunity and hostile society. It is at odds with one another; it has lost its identity and purpose other than for it to be used now as an agent of evil, terror, war and debauchery around the world and now at home.
___________________________