‘You shall utterly destroy all the places where the nations whom you shall dispossess serve their gods, on the high mountains and on the hills and under every green tree. You shall tear down their altars and smash their sacred pillars and burn their Asherah poles (obelisks) with fire, and you shall cut down the engraved images of their gods and obliterate their name from that place. You shall not act like this toward the LORD your God’ - Deuteronomy 12:2-4

‘You shall utterly destroy all the Places where the Nations whom you shall Dispossess serve their Gods, on the High Mountains and on the Hills and under every Green Tree. You shall tear down their Altars and Smash their Sacred Pillars and Burn their Asherah Poles (Obelisks) with Fire, and you shall Cut Down the Engraved Images of their Gods and Obliterate their Name from that Place. You shall not Act like this toward the LORD your God’ - Deuteronomy 12:2-4

The meeting of the Roman Catholic World Families took place in Philadelphia, Pennsylvania that culminated in the Pope’s visit to America in 2015 or 5776-5777. The Pope traversed the length of the Main Avenue in the Heart of the City. This Roman High Priest had his Meeting at the precise Spot that approximated the Phi Ratio Fulcrum of the entire breadth of the Avenue from the Museum or Art to the John F. Kennedy Plaza. This study seeks to show that the layout of the Museum of Art and avenue is laid out in a Tree of Life Pattern. This Motif in essence is an encrypted Egyptian Obelisk that spans the Main Avenue of the Heart of the City. The layout is basically a ‘Monument’ to the Number 1776. The illustrations will show various distances incorporating a Variant of this Numerical Coefficient.

The Obelisk is an Abbreviated Pyramid with a reference and design based off of the Great Pyramid of Giza that has its apex at 5776 Inches when the Capstone is considered. All Obelisks have a Pyramidion at the top and are an Encrypted Phallic Symbol derived from the Luciferian Occult Mystery Religions which originated with Nimrod in Babylon after the Flood of Noah. An Obelisk also serves as a Time-Clock of sorts, as most are delineated into 13 Sections or Steps and correspond to certain Dates as is the Great Pyramid and other Pyramid Structures found around the World. This Numerology commemorates the Myth of Osiris in how being the Husband of Isis, his brother Seth, being evil, killed him and cut Osiris’ Body up into 14 Pieces and he scattered them.

Isis attempted to reconstruct and resurrect Osiris by finding and reassembling them. She only could find 13 and the 14th, which corresponding to his Phallus was thus substituted by an Obelisk. It was upon the Copulation with Isis and this Obelisk Phallus of a Dead Osiris that she conceived and birthed-forth Horus, the Man-Child through Magic. This Nimrod-Semiramis overtone is an alternate Creation Story of Humanity by the Luciferians. Thus this study supposes that the visit of the Pope to America had a strong connection of the Pope being an association to this Phallus Symbology and Countdown. Was it mere coincidence that the Pope’s visit culminated with this 5776 Obelisk and at the beginning of the Jewish year 5776 and in the city of 1776?

Year of a Jubilee?
It was in Philadelphia that ‘freedom and liberty’ in 1776 was proclaimed in America. It was on Yom Kippur that the Jubilee of YHVH was proclaimed. It was Jesus Christ that promised the Church of Philadelphia a door of escape or freedom from the coming Wrath of the Lamb upon the world. The Roman High Priest converged on these amazing dates on Yom Kippur of 5776 and in the very city of 1776. If the pyramid of the Masons that has the Reverse Seal of the USA on their Federal Reserve Note is any suggestion, then 1776 was the start of their countdown that would terminate the Republic in a future year, 5776. This year is now.

This motif has the signatures of the Luciferian plans for America’s demise. This pattern is derived from the Great Pyramid of 5776 inches and perhaps the USA has been sectioned off into 13 sections of time with the ‘capstone’ being the final 14th section to complete the ‘obelisk’ motif for America. The following are a few of the ‘1776’ numerical coefficients found in various measurements incorporated in the ‘obelisk’ Tree of Life that spans the Benjamin Franklin Ave of Philadelphia, Pennsylvania.

From center of Fairmount Park Circle to Washington Statue
=.33 miles

Was this indicative of the possible countdown to the final chapter ‘capstone’ year of America’s purpose and existence? Was their Pope a sort of Osiris figure come alive as a ‘Pharaoh’ to lay legal claim to America in some sort of occultic way to validate the countdown as the personification of the 14th piece and phallus member typology? This visit by the Pope of Rome was deliberately synchronized to the Year of Light or of Lucifer 5776 with the city of 1776, Philadelphia and in the face of Jesus Christ’s ‘Philadelphian’ Church. The Ben Franklin Avenue Tree of Life was thus the corresponding masked Obelisk whose foundation is at the coordinates of ‘1776’. The significance of the avenue layout of Philadelphia is not only laid out as a Tree of Life grid but it is also in approximate phi ratio proportions.

Serpent Rising
The Tree of Life comes from the Occult and Kabbalistic Secret Knowledge. In part, it is used to manipulate the Material World with the help of Fallen Angels and Demonic Entities that seek to rule Humanity, Nations, Cities and maintain Lucifer’s Kingdom on Earth. The Phi Spiral will be used to enhance the relationship where the Statue of Washington in front of the Museum of Art corresponds to the Fulcrum of this ‘Philadelphia Tree of Life’. The entire Avenue Layout is a Monument to the Number 1776. This Ben Franklin Avenue is not only an Encrypted Tree of Life, but also a Serpent Motif that leads-up to the Museum in Anthropomorphic Dimensions. There are also several other layers of Hidden Symbology from the Pope’s visit that bear the Signatures of the Luciferians. For example, the Pope made an Address at the Church of the American Catholic University. It is the largest Roman Catholic structure in the USA.

The Popes spoke Ex Cathedra or ‘From the Throne’. This construct is patterned after the Merkavah Throne of YHVH that is movable. It is when the Pope sits in his Judicial Chair or Basilica, Throne that likewise as YHVH’s, has all the Legal Power and Authority to do so, even though it is far removed from the Vatican. This ‘Throne’ Chair was situated outside one of the Wings of the University Church that configured an All-Seeing-Eye Pyramid. The Symbology of the Canopy eclipsing the Church Window was reminiscent of the Masonic Blazing Star atop their Illuminati Pyramid. Perhaps that is how the Abomination will be set-up on the ‘Wing of the 3rd Temple. Another example was when Obama received the Roman High Priest at the White House. The Ceremony was on the South Lawn of the White House. And? They looked towards the Washington Monument or the Obelisk that is referred to by the Luciferians as the Shaft of Ba’al.

An iconic picture was taken as Obama and the Pope stood side by side. Obama was dressed in Black, the Pope in White. What was striking about the image was that it was to their back and the Pope, in ‘White’ Eclipsed the Washington Monument, being White and the very Obelisk Motif that signaled a Personification of the 14th Piece of Osiris, the Phallus. This is the Asherah Pole YHVH instructed the Israelites to tear-down as they entered the Promised Land. Such Obelisks were used for Sacrificial Rites and Satanic Sexual Rituals. The Washington Monument, as an Obelisk is in Phi Ratio to the human Body Proportion and Phallus. This Phi Ratio is a Mirror of this Image, along the lines of ‘As Above, So Below’. Based on the Independence Hall Benchmark, there appears to be some significant Numerical Coefficients that are noted in the illustrations.

This is seen, for example in the Numeration assigned to its Design Street Layout. As the Washington Monument is 666 Feet in Height, so is the Obelisk Motif of Philadelphia from the Washington Statue that is in front of the Museum of Art. It corresponds with the Measurement of 666 to the Swann Memorial Fountain. It also has the 999 Numerical Value correspondence, pertaining to the Ley-Lines of the entire Tree of Life Motif that this study suggests is an Encrypted Obelisk. As Noted, the Philadelphia Museum of Art appears to be designed with an Anthropomorphic Dimension. The Philadelphian Tree of Life Motif has an obvious deviation from the ideal Tree of Life Nodes. However the 3 inline Nodes of the Avenue still correspond to the Genitalia of a man. The Center-Piece corresponds to that of the Statue to General Washington.

As noted, the Tree of Life in the Occultic, comes from the interpretation of the Luciferians and Kabbalistic Secret Knowledge that some say pre-dates the Flood of Noah. It is alleged to have been handed down to the Sumerians, Babylonians and Egyptians, etc. Jewish Mystics took it up when in Exile in Babylon and brought it to Israel. Thus, it was at the beginning of this Jewish New Civil Year that the Roman High Priest Pope came to visit America. He delivered his message from the U.S. Congress. This event was historic as it was the 1st Time it has occurred that a Religious Leader addressed the Joint Session of the People’s House in the USA.

The Pope later on also addressed the entire UN to support its Agenda 21 that will enslave all of Humanity by its Climate Protocols. Interestingly, the Pope departed on the eve of the final Blood Moon of the Tetrad. The Luciferians use Numerology to coincide with Events, Time and Space to accent their Demonic Plans on Earth. They seek to Synchronize the Spiritual with the Material and use Men and Women on this side of the Veil to incorporate their Kabbalistic Rituals of Magic. Such use Earth’s Energy Ley-Lines, for example to build their Temples to harness Energies and influence the Material World.

Key Events in the World are also scheduled by the World Leaders that are in league with the Luciferian Agenda to eventually Mold and Transform all into the ‘Image of Lucifer’. Based on the ‘Coordinate-to-Year’ Theory, it appears that the Tree of Life Street Layout centers on the Museum of Art in Philadelphia. It is thus pegged to a possible ‘Clock’ Countdown or Marker of Time that highlights this very time, of a culmination of time, 5776 (2015). That Year, in the Jewish reckoning of Time is the ‘Year of Light’, or Anno Lucis, the Year of Lucifer. Will such a Year Countdown culminate in the ‘End’ of the Republic of America as one knows it to exist? Will this possible Political Termination, 7 Years Later see the Spiritual Culmination of the Spiritual Temple or ‘Pyramid’ of YHVH, as to the End of the Church Age?
_______________________ 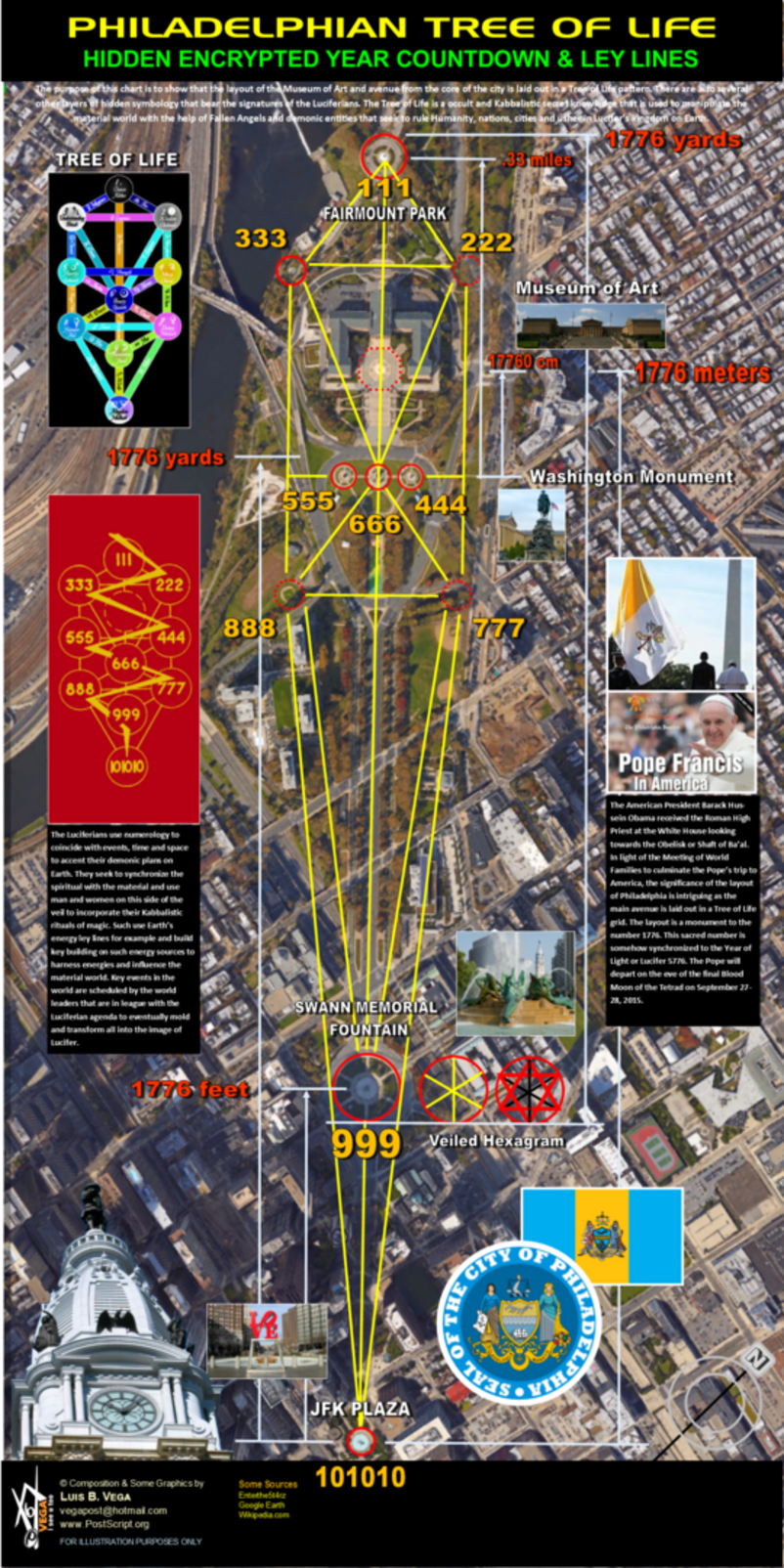