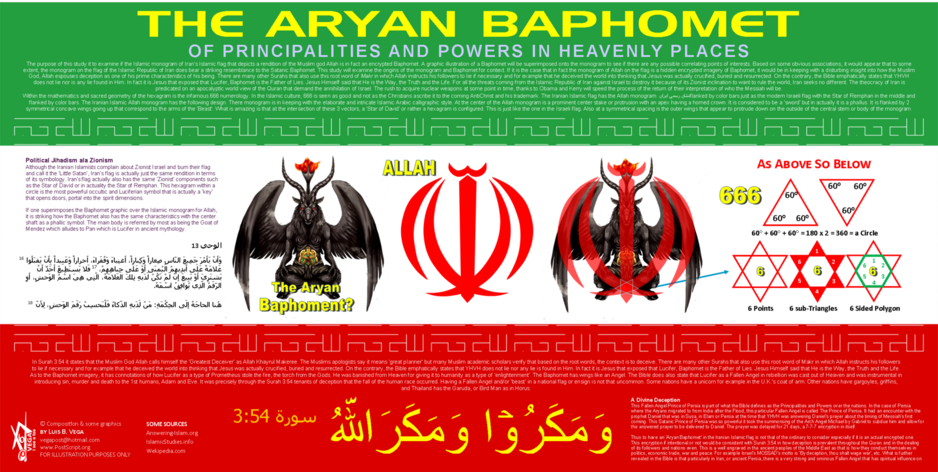 #142:
​THE ARYAN BAPHOMET
OF PRINCIPALITIES AND POWERS
Islamic Monogram of Allah on Iran's Flag

‘So that by 2 unchangeable things in which it is impossible for YHVH to lie, we who have taken refuge would have strong encouragement to take hold of the hope set before us.’ - Hebrews 6:18

The purpose of this study it to examine if the Islamic monogram of Iran’s Islamic flag that depicts a rendition of the Muslim god Allah is in fact an encrypted Baphomet. A graphic illustration of a Baphomet will be superimposed onto the monogram to see if there are any possible correlating points of interests. Based on some obvious associations, it would appear that to some extent, the monogram on the flag of the Islamic Republic of Iran does bear a striking resemblance to the Satanic Baphomet. This study will examine the origins of the monogram and Baphomet for context. If it is the case that in fact the monogram of Allah on the flag is a hidden encrypted imagery of Baphomet, it would be in keeping with a disturbing insight into how the Muslim god, Allah espouses deception as one of his prime characteristics of his being.

In this case an encrypted Baphomet posing as ‘Allah’ written in calligraphic form would be another validation of how in Surah 3:54 and in other ones, Allah deceives. This Islamic god allows his followers to deceive and falsely portrays an alternate gospel of the atoning work of Jesus Christ on the cross. In Surah 3:54 it states that the Muslim god Allah calls himself the ‘Greatest Deceiver’ as Allah Khayrul Makeree. The Muslims apologists say it means the ‘great planner’ but many Muslim academic scholars verify that based on the root words, the context is to deceive without exception as other Surahs also have this same form of word to deceive not ‘plan’.

There are many other Surahs that also use this root word of Makr in which Allah instructs his followers to lie if necessary and for example that he deceived the world into thinking that Jesus was actually crucified, buried and resurrected. On the contrary, the Bible emphatically states that YHVH does not lie nor is any lie found in Him. In fact it is Jesus that exposed that Lucifer, the Baphomet is the Father of Lies. Jesus Himself said that He is the Way, the Truth and the Life. For all the threats coming from the Islamic Republic of Iran against Israel to destroy it because of its Zionist inclination to want to rule the world, Iran seeks no different. The theocracy of Iran is predicated on an apocalyptic world view of the Quran that demand the annihilation of Israel. The rush to acquire nuclear weapons at some point in time, thanks to Obama and Kerry will speed the process of the return of their Messiah. This Messiah is not Jesus of Nazareth.

Political Jihadism ala Zionism
According to Shi’ite eschatology, it will not be Jesus Christ but a Muslim liberator, the Mahdi that will be the true ‘Messiah’ that will conquer the West and the world and subjugate it to the iron rule of Islam. To Islam, Jesus Christ was not crucified, buried nor was resurrected. It was Allah that deceived these followers into believing such a scenario. The Islamic Jesus Christ will also return only to help the Islamic Mahdi with the vengeance of completing the slaughter of Christians and Jews for not submitting to the will of Allah. Although the Iranian Islamists complain about Zionist Israel and burn their flag and call it the ‘Little Satan’, Iran’s flag is actually just the same rendition in terms of its possible encrypted symbology. Iran’s flag actually also has the same ‘Zionist’ components such as the Star of David or in actuality the Star of Remphan. This hexagram within a circle is the most powerful occultic and Luciferian symbol that is actually a ‘key’ that opens doors, portal into the spirit dimensions.

Within the mathematics and sacred geometry of the hexagram is the infamous 666 numerology. In the Islamic culture, 666 is seen as good and lucky. This number is not as the Christians ascribe it to the coming AntiChrist and his trademark. The Iranian Islamic flag has the Allah monogram نشان رسمی ایران‎ flanked by color bars just as the modern Israeli flag with the Star of Remphan in the middle and flanked by color bars. The Iranian Islamic Allah monogram has the following design. The Allah monogram is in keeping with the elaborate and intricate Islamic Arabic calligraphic style. At the center of the Allah monogram is a prominent center stake or protrusion with an apex having a horned crown. It is considered to be a ‘sword’ but in actually it is a phallus. In other renditions it is the Caduceus of Mercury and/or the double DNA helixes. It is flanked by 2 symmetrical concave wings going up that correspond to the arms of the ‘Beast’. What is amazing is that at the intersection of these 3 vectors, a ‘Star of Remphan’ or rather a hexagram is configured. This is just like the one in the Israeli flag. Also at a symmetrical spacing are the outer wings that appear to protrude down on the outside of the central stem or body of the Allah monogram.

If one superimposes the Baphomet graphic over the Islamic monogram for Allah, it is striking how the Baphomet also has the same characteristics with the center shaft as a phallic symbol. The main body is referred by most as being the Goat of Mendez which alludes to Pan which is Lucifer in ancient mythology. The current graphic depiction of the Baphomet is attributed to a Kabbalistic occult crypto Jew of France, Alphonse Louis Constant. He took on the alternate name of Eliphas Levi after supposed studying to be a Roman Catholic priest. Within the phallus, there is the Caduceus of Mercury, which is another encrypted depiction of Lucifer that seeks to alter the DNA composition of Humanity and transform, transgender it to his image and likeness. The Baphomet has horns and is crowned by a lantern that has the blazing torch at the apex of its head.

A Divine Deception
The current rendition of the flag of the Islamic Republic of Iran was construed after the Ayatollah Islamic Revolution in 1979 that toppled the CIA backed Shah of Iran. The nation did have a Reign of Terror thereafter as it too suppressed any dissention no different than that the Shah. It later on took on and went to war with Iraq as it was attacked by Saddam Hussein at the bequest of the CIA and State Department. The war lasted for over 8 years. Since then the religious leaders of Iran, like in all nations seek to maintain a sense of fear and repression by having an alternative ‘enemy’. This enemy is the Great Satan, the USA and Israel, the Little Satan. Since 1979, the USA and world banks imposed sanctions on Iran for the U.S. Embassy debacle and for expelling the global central bankers and nationalizing the oil revenues.

Contrary to popular belief, the Iranians are not Arab but Persian and speak Farsi, not Arabic. Although they too were never conquered by the Sunni Ottomans, Islam naturally infiltrated the Iranian society through, war, commerce and assimilation. However the brand of Islam that the Persians adhere to is called Shi’ite Islam as opposed to Sunni Islam. This can be compared to Roman Catholic and Evangelical brand of Christianity. Although on the onset there might be some common similarities, the ‘devil is in the details’ literally. The Shi’ite version of Islam believes in the hereditary succession of Mohammed while the Sunnis don’t. Nonetheless the eschatology of the end times is more dramatic in Shi’a Islam and it is seen as a counter weight to Saudi Arabia whom Iran eyes to take over the leadership and stewardship of ‘true Islam’, by all means possible; even by deception.

As to the Baphomet imagery, it has connotations of how Lucifer as a type of Prometheus who stole the fire, the torch from the Gods. He was banished from Heaven for giving it to humanity as a type of ‘enlightenment’ and ‘Liberator’. The Baphomet has wings like an Angel. The Bible does also state that Lucifer as a Fallen Angel in rebellion was cast out of Heaven and was instrumental in introducing sin, murder and death to the 1st humans, Adam and Eve. It was precisely through the Surah 3:54 tenants of deception that the fall of the human race occurred. Having a Fallen Angel and/or ‘Beast’ in a national flag or ensign is not that uncommon. Some nations have a unicorn for example in the U.K.’s coat of arm. Other nations have gargoyles, griffins, and Thailand has the Garuda, or Bird Man as in Horus, etc.

This Fallen Angel is part of what the Bible defines as the Principalities and Powers over the nations. In the case of Persia where the Aryans migrated to from India after the Flood, this particular Fallen Angel is called The Prince of Persia. It had an encounter with the prophet Daniel that was in Susa, in Elam or Persia at the time that YHVH was answering Daniel’s prayer about the timing of Messiah’s first coming. This Satanic Prince of Persia was so powerful it took the summonsing of the Arch Angel Michael by the Angel Gabriel to subdue the Prince of Persia and allow for the answered prayer to be delivered to Daniel. The prayer was delayed for 21 days, a 7-7-7 encryption in itself.

Thus to have an ‘Aryan Baphomet’ in the Iranian Islamic flag is not that of the ordinary to consider especially if it is an actual encrypted one. This encryption if intentional or not would be consistent with Surah 3:54 of the Islamic tenants of the nature and characteristics of their god Allah; in how deception is prevalent throughout the Quran and in the dealing of its followers and nations even. This is a well engraved in the ancient peoples of the Middle East as that is how they conduct themselves in politics, economic trade, war and peace. This Semitic mindset is no different in the Jews. For example Israel’s MOSSAD’s motto is ‘By deception, thou shalt wage war’, etc. What is further revealed in the Bible is that particularly in the case of Iran, or ancient Persia, there is a very strong and ominous Fallen Angel that has spiritual influence on the affairs of its government and peoples even. This Fallen Angel is perhaps rendered in the calligraphic rendition of the Muslim word for their god Allah in Iran’s flag.
___________________________