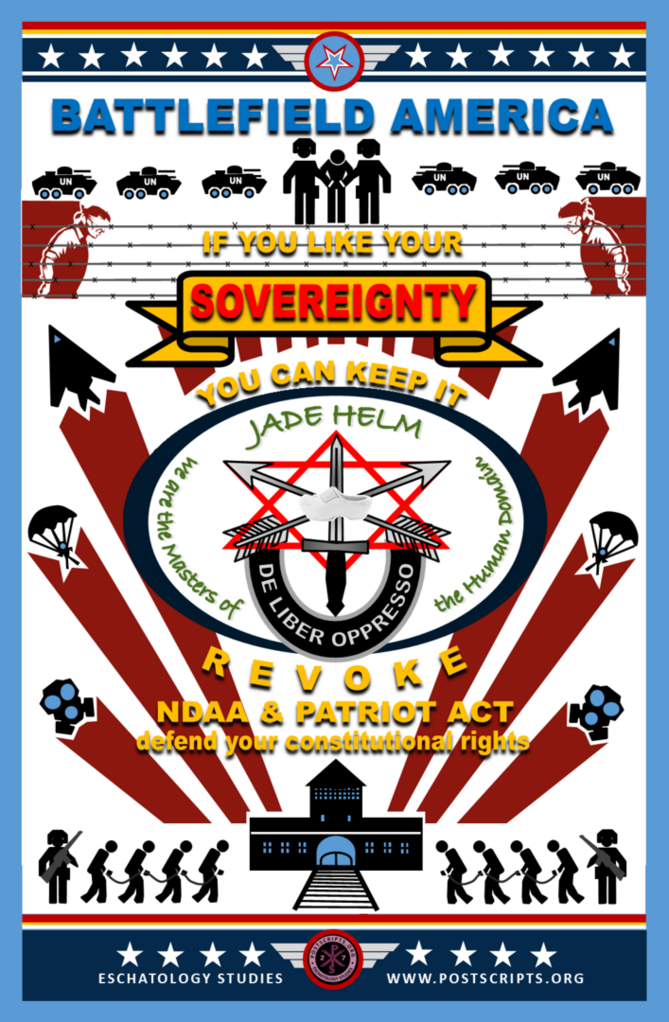 The purpose of this study is to speak about a prior topic that occurred in 2015. It deals with Jade Helm in the USA. If one remembers, this Event took place back in 2015 when that U.S Military Special Forces Operations went underway in the Southwest, but particularly focused in Texas. It was about establishing a ‘Full Spectrum Dominance’ and being ‘Supreme in their Domain’ It was an Exercise, really at implementing Martial Law and gaining Experience in gathering Intel on U.S. Citizens. One had made a Poster and wrote an Article about it. It is interesting how much of what was discussed then has come true now.

But it is because it is ‘easier’ for those Watching the Signs of the End Times and knowing what is coming up-ahead thanks to Biblical Prophecy. This U.S Military Special Forces Operation took place 7 Years ago in the midst of Obama’s Tenure. At that time, many Former Vets, Patriots, Constitutionalists, Bible-Believing Christians, Libertarians and the like were Alarmed at this. And rightly so as this type of Military Exercise has once again gone Public now again. After all, with the current U.S. Presidency, it is essentially Obama 2.0.

Now 7 Years later, there was an announcement that the U.S. Army was conducting ‘Domestic Terrorism Exercises’ in the Carolinas. And the ‘Enemy’? Freedom Fighters. Well, during that time leading-up to Jade Helm in 2015 as well, in tandem with such info, Steve Quayle came out and spoke about the ‘List’. This List was for the coming Extermination of said Parties or People that would be Executed once the USA either Collapsed or Capitulated in joining the New World Order. The List was Color Coded if one vaguely remembers? There was the following Colors.

These, according to the Intel that Steve Q received supposedly from his Sources deep in the U.S. Military spoke of how they would tag one’s Mailbox, Curb or House, etc. The Red Color Tag would be for Executions; either on the Spot or for People taken to the Camps to be Executed there. These would be those Resisting or Opposing the Government’s Mandates. These would be considered ‘Enemies of the State’. And thanks to the Patriot Act, the NDAA and now the USA is still under a National ‘Emergency’ thanks to Trump, the USA is actually ruled by FEMA.

Kill Lists
The USA is really run by the 10 Regional Administrations of FEMA until the President ‘Retracts’ the Emergency Status. And that will be never. The U.S. President is just a Figure Head. There is really no more Constitutional Law guaranteed. Any semblance of one is really just a Façade. Then the Blue Color Tag would be for those that are ‘On the Fence’ that would be or will be allowed to live if they are ‘Re-educated’, China Style to go along and so on. The Yellow Tag would be for those supporting the State, etc.

In the Article written then, one tried to tie it to what was going on there in terms of the Watchmen Community. That year, 2015 was the Last Year of the Blood Moon Tetrad. The Pope came to make that Historic Speech at the Capital. He then met with Obama as they paid homage in front of Ba’al Obelisk, the Washington Monument, etc. The Pope then paid a visit to the City of Philadelphia, the same Name alluding to the one that would Escape through a ‘Door’, according to the Book of Revelation.

So, there was a lot of Chatter and Prophetic Movement and Rapture Expectation. It is neat to see what one was thinking about during that Time. But in Hindsight, events like Jade Helm just gave more credence that from that point on, it would be a 7-Year Countdown. The Year 2015 was the 7th Year of the Sabbath Cycle, like 2022 is now. And looking back, ‘They’ even told the World that what began with Jade Helm would be finished or implemented 7 Years later. See/Hear the Occult Message in Speech by Christine Lagarde of IMF. Remember?

Well, all this to say…that during one’s usually 12 Noon Lunch Hour Walks, from one’s Apartment to the nearby Park….one noticed a Day or 2 ago as of this writing a Color ‘Dot’ pained in front of one’s Apartment. It was only Tagged on one’s side of the 4-Unit cohort. It is not Red but Orange in Color, which is Red mixed with Yellow. So, one checked all the other Units in the same row. There was another Orange Color Dot. Where? On the curb, in the Parking Lot assigned to my Unit, right next to and in front of one’s Vehicle. My assigned Parked Spot is about 8 vehicles over though.

Or maybe ‘Orange was or has been added to the Hit List? But, if one is on the real ‘Hit List’, one counts it as a ‘Badge of Honor’. Well, should one be worried about this? Is it COVID related marking who is or is not Injected? Have they ‘got me?’. It could be just a Maintenance Marker as such are often seen marking sidewalk, curbs, etc. This could be the reason most likely. But it rather odd and particular. Out of all the Units in nearly a Mile Perimeter, only these 2 ‘Color Dots’ Tag my Apartment and my Parking Spot.

Tagged, You are It
So, is this how they will or are bringing back the Protocols of Jade Helm? If one does not see of me or those writing and disclosing about the ‘Enemy’ for a while, one will know why. But GOD, right? One is still holding to the Promise one believes Jesus gave that one would be alive and with Family when the Rapture happens. And that is why one believes Jesus did not allow one to die when one had that Near Death Experience in 2018. Thus, one can rest in this Promise and leave the Circumstances to and Consequences with Jesus to work it out with Satan and his Minions. Remember, no Weapon forged against will prosper. Many would say though that what has and is happening in Australia, New Zealand, Canada, and Europe is much worse. True.

One does not have Twitter but if you do not know about Eva from the Netherlands, she has been a Voice of Action. She came on with Tucker Carlson and explained what is happening in and to Europe. And there are other People, even within the European Parliament or the Tower of Bebel that have voiced how the Injections are no better than Murder. The Croatian MP Mislav Kolakusic even delivered a direct indictment to Macron’s Masked Face. It is rather interesting that Macron now has been handed the Mantle of the Seat there in Strasbourg, France.

Since 2020, the Europeans have pushed back much harder than the Americnas, at least those that are aware of what is happening, like Eva. Yet the crack-down has also been severe. Perhaps it is because the Europeans know what it is to live under Tyranny and how their Continent has been ravished as a result many times over. And it is to happen again. There are countless more like Eva but most are being likewise Censored. It is not about being Immune or ‘Safety’, it is about Total Control. The Europeans, like the Australians have come out in massive Protests since 2020 but that is hardly shown in the Main Stream Media here in the States, on purpose of course.

But despite this brave effort, the countries are falling into place for that next New World Order one knows all this is heading. In one of her many interviews, what Eva said is true in that the framework is set-up already for the Beast System to rise from Europe. And this thanks to decades since World War 2 of ‘Social Democrat’ or ‘Christian Democrat’ Policies. They are code of Socialists and Communists. She basically has said that Europe is like China now….activities have already been based on the Injection Passport in many Nations. A partial ‘Reprieve’ to the Mandates is only a Psy-Op of taking 2 Steps Forward, 1 Step Back’.

And that will eventually morph quickly into a Social Credit Score what will then be tied or will be to all Purchases, Financials, Medical, etc. It will be a condition to travel and to be able to ‘Participate in Society’. Macron, as an Effeminate Controlled Asset does not nor cannot project Power. So, his Handlers coached him to appear so with his ‘Words’. What did he say? Of all Nations in Europe, of all Presidents whose People threw-off the Yoke of the Oligarchy, the International Bankers, they have resorted to a State that has no more Liberté, Égalité, Fraternité. Macros was told to say that those not wanting to be Injected are ‘Not Citizens’. In Germany, the Bundestag or Congress has barred anyone to participate if not Injected.

In England, former PM Toni Blair said that such People are Idiots. Same with Trudeau of Canada, and Australia, New Zealand. The Squeeze is on over there and it will come to the USA eventually. You have Tennessee where last in 2021, the Governor signed Executive Orders to mobilize the National Guard to forcibly Quarantined those not Injected. You have the CDC’s Project Shield that will also forcibly remove whomever they want to ‘Green Zones’ for their Safety. Remember, this is what they said in Europe to the Jews.

In Washington State, they passed the Bill that can have People ‘Liquified’ and used basically as ‘Fertilizer’ for Plants. And they are still knocking around the idea of the COVID Camps. Yet, COVID Camps are a Reality now in Canada and Australia. It is really Pre-Nazi Germany in preparation for the Final Solution. The USA in comparison to Europe is nowhere near the Anger or level of Protest as they have been. But one knows that the Spirit of the Last Rendition of the 4th Kingdom, that being Rome, will be, and is Rising as the USA will and is Falling. So, Eva is a source one will be checking-up to see her take on what is going on Europe, aside from the fact that she is Drop Dead Gorgeous, does help too.
__________________________

The Coming Enslavement and Extermination of American Citizens Was Rehearsed by Obama in 2015-2016
https://thecommonsenseshow.com/activism-agenda-21-conspiracy/coming-enslavement-and-extermination-american-citizens-was-rehearsed-obama-2015-2016