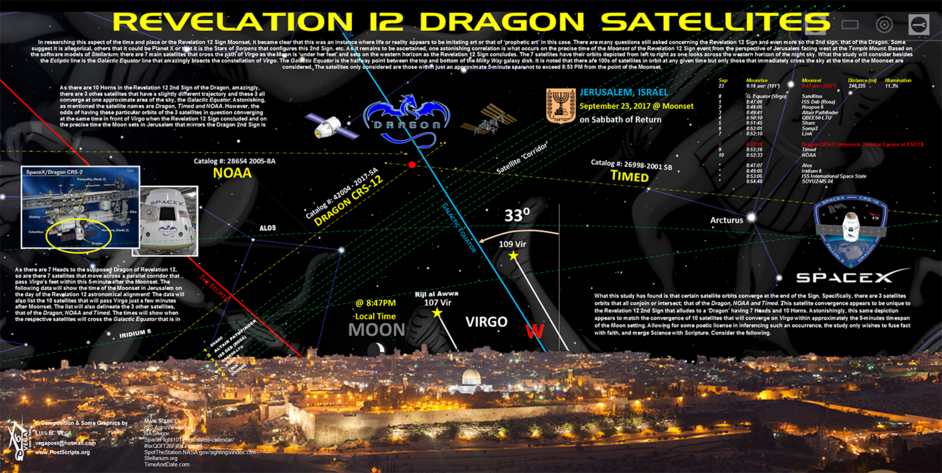 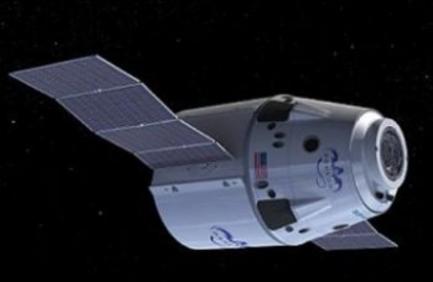 #272:
REV 12 DRAGON SATELLITES
MERGING OF FACT AND FAITH
Convergence of Science and Scripture

‘Then another Sign appeared in Heaven: an enormous Red Dragon with 7 Heads and 10 Horns and 7 Crowns on its heads. Its tail swept .33 of the Stars out of the Sky and flung them to the Earth. The Dragon stood in front of the Woman who was about to give birth, so that it might devour her Child the moment He was born. She gave birth to a Son, a Malechild, who will rule all the Nations with an iron scepter. And her Child was snatched up to GOD and to His Throne.’ –Revelation 12: 3-5 (with emphases)

The purpose of this study is to depict the various satellite orbits that will be in the sky on the precise Moonset of the Revelation 12 Sign. The illustration will depict the various trajectories of the naked-eye satellites just as the Moon sets in Jerusalem. The Moonset time in Jerusalem is at 8:47 PM, local time. A portion of the constellation of Virgo will be visible with the noted Star of Vir 107 Rijl al Awwa. As it is understood, the September 23, 2017 Revelation 12 Sign appears to astronomically match that which is depicted in the last book of the Bible. This study seeks to show that there are some amazing and anomalous associations about the convergence of some specific satellite orbits during this time and place. This study wished to present as a suggestion the inference to the trajectory of these various satellites as having possible prophetic overtones to the Sign.

In researching this aspect of the time and place or the Revelation 12 Sign Moonset, it became clear that this was an instance where life or reality appears to be imitating art or that of ‘prophetic art’ in this case. There are many questions still asked concerning the Revelation 12 Sign and even more so the 2nd Sign, that of the Dragon. Some suggest it is allegorical, others that it could be Planet X or that it is the Stars of Serpens that configures this 2nd Sign, etc. As it remains to be ascertained, one astonishing correlation is what occurs on the precise time of the Moonset of the Revelation 12 Sign event from the perspective of Jerusalem facing west at the Temple Mount.

Based on the software models of Stellarium, there are 7 main satellites that cross the path of Virgo as the Moon is ‘under her feet’ and sets on the western horizon as the Revelation 12 Sign concludes. The 7 satellites have their orbits depicted from left to right as one looks across the western horizon of the night sky. What the study will consider besides the Ecliptic line is the Galactic Equator line that amazingly bisects the constellation of Virgo. The Galactic Equator is the halfway point between the top and bottom of the Milky Way galaxy disk. It is noted that there are 100s of satellites in orbit at any given time but only those that immediately cross the sky at the time of the Moonset are considered. The satellites only considered are those within just an approximate 5-minute span not to exceed 8:53 PM from the point of the Moonset.

The Dragon in the Sky
As an Amateur Astronomer, one is aware that in certain parts of the sky there is a concentration of satellite orbital paths that occur. All of these are set to precise mathematical logarithms and calculus. These satellite orbits constitute cosmic ‘freeways’ or motorways in the sky where satellites are programmed to such specific orbits. The speed of the satellites screech across the sky at a very fast pace from Earth’s perspective. It so happens that at the juncture between Virgo and Libra there is a major satellite thoroughfare. There is nothing unusual about such trajectories in themselves and for example, there are excellent websites where one can even track the satellites and the International Space Station ISS. Consider the following.

What this study has found is that certain satellite orbits converge at the end of the Revelation 12 Sign. Specifically, there are 3 satellites orbits that all conjoin or intersect; that of the Dragon, NOAA and Timed. This satellite convergence appears to be unique to the Revelation 12 2nd Sign that alludes to a ‘Dragon’ having 7 Heads and 10 Horns. Astonishingly, this same depiction appears to match the convergence of 10 satellites that will converge on Virgo within approximately the 5-minutes timespan of the Moon setting. Allowing for some poetic license in inferencing such an occurrence, the study only wishes to fuse fact with faith, and merge Science with Scripture.

As there are 7 Heads to the supposed Dragon of Revelation 12, so are there 7 satellites that move across a parallel corridor that pass Virgo’s feet in just 5-minutes after the Moonset. The following data will show the time of the Moonset in Jerusalem on the day of the Revelation 12 astronomical alignment. The data will also list the 10 satellites that will pass Virgo just a few minutes after the Moonset. The list will also delineate the 3 other satellites, that of the Dragon, NOAA and Timed. The times will show when the respective satellites will cross the Galactic Equator that is in direct line with Virgo.

As there are 10 Horns in the Revelation 12 2nd Sign of the Dragon, amazingly there are 3 other satellites that have a slightly different trajectory and these 3 all converge at one approximate area of the sky, the Galactic Equator. This juncture echoes the prophetic depiction of the Dragon in front of Virgo in the Revelation 12 Sign. Astonishing and as mentioned, the satellite names are Dragon, Timed and NOAA. Furthermore, the angle of degrees from the horizon to the Galactic Equator where the Dragon satellite orbits converge is 33 degrees. One could chalk-up this amazing conflagration as mere coincidence and chance. However, the odds of having these particular orbits of the 3 satellites in question converging at the same time in front of Virgo when the Revelation 12 Sign concludes and on the precise time the Moon sets in Jerusalem that mirrors the Dragon 2nd Sign is amazing. Additionally, after the Moon and Virgo set, the International Space Station ISS passes at that same point on the Galactic Equator. Thereafter, the ISS is followed by the Russian SOYUZ.

The following section will delve into what this Dragon Satellite is all about and what it is doing coincidentally at this precise time and date that astonishing mimics the Revelation 12 2nd Sign of the Dragon set before the Woman. According to research, the Dragon CRS-12 was developed and implemented by SpaceX. SpaceX is an American private space transportation company based in Hawthorne, California. SpaceX's CEO is Elon Musk, the mogul billionaire from South Africa. He was scoffed at for such a project and vision by many both the science and secular world. It is said that for this reason, he named the spacecraft ‘Dragon’ after the 1963 song ‘Puff, the Magic Dragon’ by Peter, Paul and Mary. The CRS stands for ‘Commercial Resupply Services’. Its sole purpose is to supply the International Space Station which started on May 25, 2012. It takes 2 days to reach the ISS and this Dragon CRS concluded its 12th mission in mid-September 2017. The following is the International Space Station Calendar that shows that the Dragon CRS-12 mission concluded and headed back to Earth.

This 12th mission was launched on 14 August 2017, just 7 days before the Great American Eclipse. The used Dragon capsule will return to earth after around 1 month in orbit as the August mission ended in mid-September of 2017. The Dragon CRS-12 spacecraft was launched using a Falcon 9 rocket and can deliver a payload of over 6,400 pounds of supplies and experimental support materials. The satellite Dragon CRS is the only reusable spacecraft currently flying to the International Space Station aside from SOYUZ. The Dragon satellite is recovered at the end of each mission, instead of burning up in the atmosphere on reentry. Also, the following is a paraphrase of what the International Space Station is. The International Space Station (ISS) is a space station, or a habitable artificial satellite, in low Earth orbit. Its first component was launched into orbit in 1998, and the ISS is now the largest human-made body in low Earth orbit and can often be seen with the naked eye from Earth. The ISS serves as a microgravity and space environment research laboratory in which crew members conduct experiments.

Prophetic Overtones?
As noted, the probability of such convergences of satellite orbits on this particular day and time of the Moonset in Jerusalem at the conclusion of the Revelation 12 Sign astronomical alignment is uncanny. To have a triple intersection of the orbits of the 3 satellites, the Dragon, NOAA as in Noah, and Timed boggles the mind. How can it be coincidence? Was this deliberately done by the powers that be? Have the Luciferians that run such agencies and projects set this up to ‘mock’ the Revelation 12 Sign? Imagine the mathematics and calculus involved to have not only the 7 satellites pass Virgo at the Moonset. To reiterate, it is amazing that the convergence of the 3 satellite orbits in particular occurs, most notably the ‘Dragon’ that meets-up with NOAA ‘Noah’ at the end of ‘Timed’ at the Galactic Equator and at the conclusion of the Revelation 12 Sign.

The odds are ‘astronomical’ or was it the Creator that even uses such objects to orchestrate a conformation of sorts. Does this convergence of the Dragon with NOAA and Timed satellites point to the prophecy of a coming time like the Days of Noah where their world was ‘timed-out’? Did a ‘Dragon’ type come to aid in their destruction as it will be for these Last Days before Jesus returns? At this point, nothing is beyond the realm of possibility. Nonetheless, for those that study End Times, it is hard to ignore the plausibility of even the names that occur at this satellite convergence on the alignment day of the Revelation 12 Sign, the Dragon, NOAA as in Noah, and Timed as if ‘it is time’.

Time for what? The times of the Days of Noah and the coming Dragon that is on many levels the confabulation of the AntiChrist system and the actual Son of Perdition to come on the scene one day. Sure, one can be reading a lot into this depiction, however it is a case were some amazing and anomalous associations about the convergence of some specific satellite orbits do occur as fact. It is a clear instance where life or reality appears to be imitating art or that of ‘prophetic art’ no less. In this case, of prophetic art or symbolism, it is that of the Revelation 12 Sign as the occurrence appears to fuse fact with faith and merge Science with Scripture.
_____________________