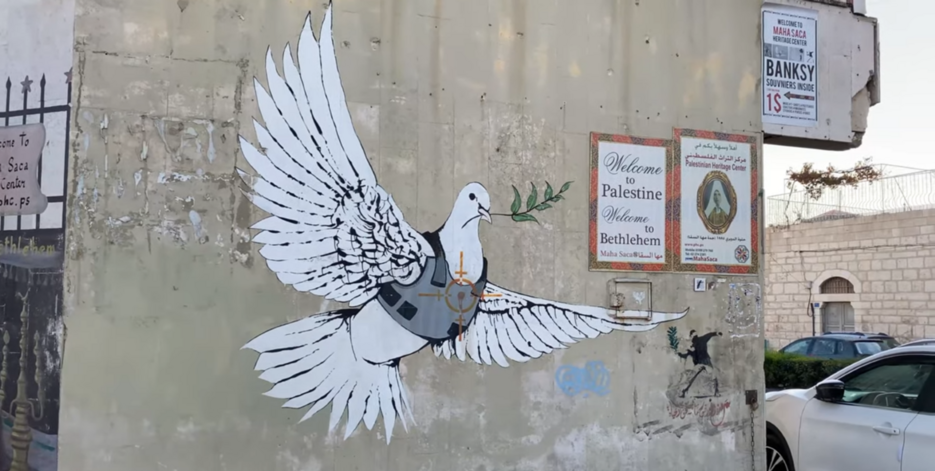 ‘Suddenly the Fingers of a Man’s Hand emerged and began writing opposite the Lampstand on the Plaster of the Wall of the King’s Palace, and the King saw the Back of the Hand that did the Writing’. -Daniel 5:5

The purpose of this study is to highlight the various Pieces of Palestinian Graffiti and Mural Artwork that covers large portions of Israel’s Security Walls. For those that are connoisseurs of Artwork in general or Political Art, specifically, one will be interested to know what the Palestinian Graffiti looks like and conveys. They are situated in both the Gaza Strip and in the Border Sections of the Judea and Samaria, known as the West Bank. The Graffiti has come to be an item of interest in the West and uniquely another Tourist Attraction.

For context, a brief Historical Context will be provided. Palestinian Graffiti became a tool of Resistance since the 1980s and with the start of the Intifadas or Uprisings against the Jews. The Palestinians see themselves as ‘Victims’ and Israel as an Occupying Force. The Artwork and Graffiti Pieces became a form of Communication and even supported by either varying Political Parties or the PLO at the time.

The endeavor to depict the Psyche, Struggle and Realism of the Palestinians within Israel has not gone without its own Criticism from within. Many Palestinians objected to the idea once the Security Walls became to be erected. This was especially the case when Israel withdrew from the Gaza Strip in 2005. Why? They say the Graffiti and the Murals as a ‘Beautification’ of the Symbol of their Oppression or ‘Incarceration’.

Many complained, and to this Day, that Tourists come to only take pictures and see the Murals and Graffiti and not what they represent and are trying to communicate about the conditions of the Palestinians. Some of the Graffiti and Mural depictions are striking and amazing. The imaginations of the Artists are using Art that transcends language. Art is a Universal Language that anyone can Understand, immediately. Art

has always been used to communicate since Human History started to record interactions with each other. In fact, Language came from Art, etc. The best-known Artist is named Banksy. He is a British Citizen that uses Street Art as a Commentary of Society’s various ills. His work has been should for Millions on Art Auctions. However, others, in this case many in the Israeli Security Forces would not call Banksy an ‘Artist’ but an Political ‘Arsonist’ or worse, an Instigator and one who is damaging Israel’s Security Wall and aiding the Terrorism that the Palestinians impose on Israel.

Good Fences, Good Neighbors
Most Palestinians believe the Wall is ‘Illegal’ under International Law, but that is incorrect. Any Sovereign Nation has the right to build a Wall or a line of Demarcation of its Borders.  The Israelis have erected the Security Wall for that very reason, Security. Even though the Palestinians ‘Promised’ to stop Attacking Israelis and launching Rockets into Israel, indiscriminately, which is a violation of International Law, it has not stopped such actions since 2005 when Israel pulled-out of Gaza.

It is no different than a Home-Owner erecting a Yard Fence and then the Neighbors objecting to it, so much so, that they paint it with Artwork, Graffiti and still lob rocks and object over it into the Home-Owners Property.  And then they complain to the City Council that the Home-Owner needs to take their Fence down. Why? The Palestinians object to being converted into the largest Open Prison.

One would agree that it might be a ‘Prison’, but that its suffering and neglect has not been the fault of Israel but their Leaders. As the average Palestinian in Gaza, for example is mal-nourished, under-educate, under-Employed, its Leaders have Secret Swiss Bank Accounts where they launder-away the Billions they receive at their expense, their Suffering and ‘Incarceration’.

It is Good Business to keep the Palestinians in the U.N. Refugee Camps since 1948 as Generations of Young Palestinians are still relegated to having no Running Water, or reliable Electricity even. All the while, their Leaders reside in Mansions. Thus, to a degree, the Artwork on the Wall is a Message addressed to their Leadership as much as to the World. Most, if not all of the Verbiage is in English, as the Intended Audience is the West.

While Israel calls it a necessary Security Wall, the Palestinians call it a Racial Segregation that has been now compared to that of South Africa’s former Apartheid System. This is laughable. One would contend that it is the Palestinian’s Leaders that is keeping the Average Palestinian in a State of Apartheid. And there is a Double Standard. For the Protests, Riots and Demonstrations for the worldwide Cameras, they would rather work in Israel than Gaza or in the West Bank.

Why is that? Nonetheless, Graffiti and Art as a means of Communication is a Powerful Tool that is being used as a ‘Weapon’ of War’. As the saying goes, ‘A Picture is worth 1000 Words’, etc. Art can travel around the World that can display the conditions of a People or Place or of a Conflict.

It does provide a ‘Canvas’ to tell the ‘Story’ where everyone can Understand. What is also occurring, is that various Palestinian Political and Religious Factions are just as much vying for the ‘Message’ to be conveyed to its own Audience. Why? As noted, Images are Powerful Influencers. The Graffiti and Artwork can and does range from the Political, the Artistic to commemorating Strikes, Muslim Martyrs, Leaders, Heroes to Concepts and Slogans of Defiance. In some instances, the Imagery portrays the Bleak Vestiges of a Conflict-Torn Territory.

Lost in Translation
It is a way of keeping the World Accountable of the Devastation. But whose fault is that? The Israelis? Not so fast. The Palestinian Graffiti does do an outstanding job of portraying its Political and Religious Struggle against Israel. It does look like life lived there could come out of a Hollywood Dystopian Futuristic Orwellian Nightmare. If only that same Rage, Frustration and Anger could be funneled towards their Corrupt Leaders. It has been over 70 Years and there have been Billions upon Billions of Dollars and Euros poured into ‘Palestine’.

There is no reason why the Palestinian People still need Homes, how Electricity is scarce, and how most of their Water isn’t drinkable. With all that Money in Investments since the 1950’s coming from the USA, the EU, the UN and from the Oil Rich Arab State, every Palestinian would be a Millionaire. Yet, the Money is rather spent on ‘Saving Face’ against the Jews or having lost their chance at having a State of their own with the UN Partition Plan. The issue?

The Palestinians had refused a 2 State Solution. They wanted it all and for the Jews to never have a State of their own. So, to this end, the Palestinians are Victims of their own Defeat and Muslim Religion. They rather Kill themselves through Suicide Bombing and Kill Israeli Civilians than have a Dual State. Any Rhetoric to the contrary is Deception, intentionally to persuade the International Community of their Victimization Complexes. This is the Muslim Way.

To this end, the Drawing of Murals, are mostly commemorating Nationalistic Occasions such as the Nakba Day or the ‘Catastrophe’, as Palestinians refer to the War of 1948 that they lost in Attacking Israel, who had agreed to the 2 State Solution and declared their Independence.  For those Groups that do not have a Platform to Voice their Grievances, Graffiti and Artwork is a way out

In the case of the Palestinian Cause, the World Community has ‘heard’ and Seen their cry. Now, even the Palestinian Authority and various International Organizations have partnered-up with Artists to work on the Wall Art Depictions. It should be noted that not all the Graffiti and Artwork is centered around Politically Charged Paintings and/or Slogans. However, due to its popularity and sensationalism, it is the theme that is more commonly portrayed around the World, thanks to Social Media.
______________________