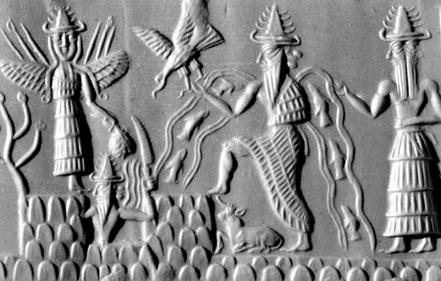 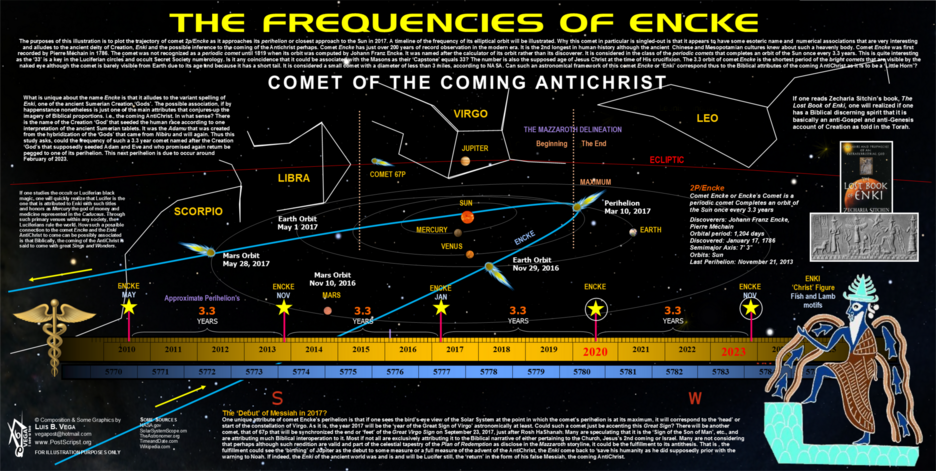 #224:
FREQUENCIES OF ENCKE
COMET OF THE ANTICHRIST
Astronomical Synchronizations

The purposes of this study is to plot the trajectory of comet 2p/Encke as it approaches its perihelion or closest approach to the Sun in 2017. A timeline of the frequency of its elliptical orbit will be illustrated is subsequent years to come. Why this comet in particular is singled-out is that it appears to have some esoteric name and numerical associations that are very interesting and alludes to the ancient deity of Creation, Enki and the possible inference to the coming of the Antichrist perhaps. In terms of its pure astronomical make-up, a brief synopsis will be presented from research. Comet Encke has just over 200 years of record observation in the modern era. It is the 2nd longest in human history although the ancient Chinese and Mesopotamian cultures knew about such a heavenly body. Comet Encke’s visibility is usually in the late Fall with the Taurids Meteor Shower. Comet Encke was first recorded by Pierre Méchain in 1786.

The comet was not recognized as a periodic comet until 1819 when its orbit was computed by Johann Franz Encke. It was named after the calculator of its orbit rather than its discoverer. It is considered in the class of the periodic comets that completes an orbit of the Sun once every 3.3 years. This is quite interesting as the ‘33’ is a key in the Luciferian circles and occult Secret Society numerology. Is it any coincidence that it could be associated with the Masons as their ‘Capstone’ equals 33? The number is also the supposed age of Jesus Christ at the time of His crucifixion. The 3.3 orbit of comet Encke is the shortest period of the bright comets that are visible by the naked eye although the comet is barely visible from Earth due to its age and because it has a short tail. It is considered a small comet with a diameter of less than 3 miles, according to NASA. Can such an astronomical framework of this comet Encke or ‘Enki’ correspond thus to the Biblical attributes of the coming AntiChrist as it is to be a ‘Little Horn’?

What is unique about the name Encke is that it alludes to the variant spelling of Enki, one of the ancient Sumerian Creation ‘Gods’. The possible association, if by happenstance nonetheless is just one of the main attributes that conjures-up the imagery of Biblical proportions. i.e., the coming AntiChrist. In what sense? As noted the orbital frequency is that of 33, the highest Masonic degree, at least revealed to non-initiates. Then there is the name of the Creation ‘God’ that seeded the human race according to one interpretation of the ancient Sumerian tablets. It was the Adamu that was created from the hybridization of the ‘Gods’ that came from Nibiru and will again. Thus this study asks, could the frequency of such a 3.3 year comet named after the Creation ‘God’s that supposedly seeded Adam and Eve and who promised again return be pegged to one of its perihelion; perhaps? This next perihelion approach will not be until 2023.

The ‘Debut’ of Messiah
One unique attribute of comet Encke’s perihelion is that if one sees the bird’s-eye view of the Solar System at the point in which the comet’s perihelion is at its maximum, it will correspond to the ‘head’ or start of the constellation of Virgo. As it is, the year 2017 was the year of the Great Sign of Virgo astronomically at least. Could such a comet just be accenting this Great Sign? There will be another comet, that of 67p that will be synchronized the end or ‘feet’ of the Great Virgo Sign on September 23, 2017, just after the Feast of Trumpets. Evidently, regardless of any such association, Biblically there does seem to suggest by the Great Sign of Virgo that a ‘debut’ will occur from the ‘birthing’ of the ‘King Planet’ Jupiter. Will this be the debuts of Encke’s ‘King’, the AntiChrist? The following items will be presented to suggest a possible link between the comet Encke with that of Enki.

If one reads Zecheria Sitchin’s book, The Lost Book of Enki, one will realized if one has a Biblical discerning spirit that it is basically an anti-Gospel and anti-Genesis account of Creation as told in the Torah. The facets of the framework are borrowed from that of the Torah and protocols of YHVH in that for example, the Scribe, as a type of Moses on Mt. Sinai is given a ‘mana’ like sustenance that gives him strength to write Enki’s version of Creation for 40 days, etc. In this alternative narrative of the ‘Gods’, Enki presents his version of Creation; of the first humans, the fall of the Watchers and the Flood of Noah, etc. In the narrative, Enki, the ‘good god’ and ‘Lord of the Earth’ who is the brother of Enlil, the ‘evil god’ and the co-Creators of the Earth seeks to convey this narrative that he supports Humanity’s evolution to ‘godhood’ and enlightenment. Despite the character flaws for which Enlil seeks to destroy the Earth and every human on it, Enki seeks to save Humanity as a type of Prometheus, etc.

The Creation account of Enki is a false ‘gospel’ of salvation and an Angelic attempt, a Fallen Angel at that, mind you to reverse who are the Protagonists and who are the Antagonist. Based on the ancient known texts of the Sumerians, the exact meaning of Enki is translation ‘Lord of the Earth’. He was a Creator ‘God’ of the city of Eridu from where the Edin or the Garden of Eden was created on Earth by ‘extraterrestrial’ being or as the Bible rightly discloses them as being none other than Fallen Angels. What is also very interesting is that according to ancient understanding, Enki was apparently depicted, sometimes, as a man over-arching above a lamb covered with the skin of a fish, thus the original Dagon God. It was this ‘God’ or more so the Luciferian spirit behind it that always stood against the Testimony of YHVH and against the earthly people of YHVH, the Jews who were specifically entrusted with divine revelation. The following are the elementary astronomical specifications for comet Encke.

Lying Signs and Wonders
The question remains, could such a synchronization of comet Encke alluding to the coming of Enki that has a similar name as the supposed Creation ‘Gods’ that seeded Humanity and promised to return coincide with the coming of the Biblical AntiChrist? Moreover, will the coming of the Biblical AntiChrist come along with the full Alien ‘Disclosure’ of such Fallen Angels or Beings as the ‘extraterrestrial’ ‘Gods’ that came from Nibiru? Thirdly, will such a prophetic and esoteric synchronization of events play in the framework of the coming ‘Lying Signs and Wonder’s that will be part of the deception given over to Humanity as Nemesis actually begins to approach its perihelion with the Sun? A theory about this Nemesis or 2nd Sun holds that the ancient symbol of the Swastika appeared in a variety of cultures across the world at the same time.

Could such a cultic sign have been inspired by the appearance of Nemeses and the interaction with the comet, Encke head-on perhaps as the curved jets would have been reminiscent of the Swastika motif? The Swastika is said to also be the ancient motif of the Black Sun or the 2nd Sun, Nemesis from where the gods of the like of Enki came from and will again in the Last Days as is Nemesis. This is according to the depiction and the effects of the Seal Judgments of the book of Revelation and the book of Enoch among others. Over the centuries involving human civilization and its evolution, another motif became directly associated with Enki. The Creator ‘God’ Enki became associated with the planet Mercury. His image is a double-helix snake, or the Caduceus; master ruler of the world, god of wisdom and of all magic.

If one studies the occult or Luciferian black magic, one will quickly realize that Lucifer is the one that is attributed to such titles and honors. As Mercury the god of money and medicine represented in the Caduceus is what makes the world go round. Through such primary venues within any society, the Luciferians rule the world. How such a possible connection to the comet Encke and the Enki AntiChrist to come can be possibly associated is that Biblically, the coming of the AntiChrist is said to come with great Sings and Wonders. Perhaps such a sign will be a heavenly one or more precisely an astronomical one. Some suggest that as Jesus Christ came into the world, born of flesh, it was accompanied by the ‘Star of Bethlehem’ that many purport to be the planet Jupiter. Many are as the past year on a frenzy about the coming Revelation 12 Great Sign of Virgo.

Many are speculating that it is the ‘Sign of the Son of Man’, etc., and are attributing much Biblical interpretation to it. Most if not all are exclusively attributing it to the Biblical narrative of either pertaining to the Church, Jesus’s 2nd coming or Israel. Many are not considering that perhaps although such rendition are valid and part of the celestial tapestry of the Plan of Redemption as disclose in the Mazzaroth storyline, it could be the fulfillment to its antithesis. That is , the fulfillment could see the ‘birthing’ of Jupiter as the debut to some measure or a full measure of the advent of the AntiChrist, the Enki come back to ‘save his Humanity as he did supposedly prior with the warning to Noah. If indeed, the Enki of the ancient world was and is and will be Lucifer still, the ‘return’ in the form of his false Messiah, the coming AntiChrist will be initially a façade in terms of bringing a lasting ‘Peace and Security’ to YHVH’s earthly people and the world. According to Jesus, the Father of Lies, Lucifer seeks to rather by deception wage war on Humanity as he seeks to destroy it. Why? One extra-biblical source might provide a clue. In The Book of the Cave of Treasures discloses that the Prince of the order of Angels saw that the ‘Great Majesty’ had been given to Adam. This presumed Prince of the Angels, Helel or Lucifer became jealous of the human creation from that day, and he did not wish to worship him. Moreover, such a dominion was to have been taken from the Earth that the Prince of the Angels previously had. Here is a passage from the book that could be said of Lucifer,

‘And he said unto his hosts, Ye shall not worship him, and ye shall not praise him with the Angels. It is meet that ye should worship me, because I am fire and spirit; and not that I should worship a thing of dust, which hath been fashioned of fine dust.’

Thus could such an astronomical comet, Encke allude to the coming of Enki in ‘fire and spirit’ or as the Bible states, ‘Lying Signs and Wonders? Could such a sign as a comet be part of such a coming sign of the coming one that will demand instead worship of all humans be ascribed to him that is made of ‘fire and spirit’ likewise? Could the comet Encke be telling what year the AntiChrist is to be debuted perhaps? Will it be the year of 2022-23, the year of the debut which could be the revealing not of the true Christ but that of the Antichrist instead at the 3.3 or ‘33’ year cycle?
_______________________