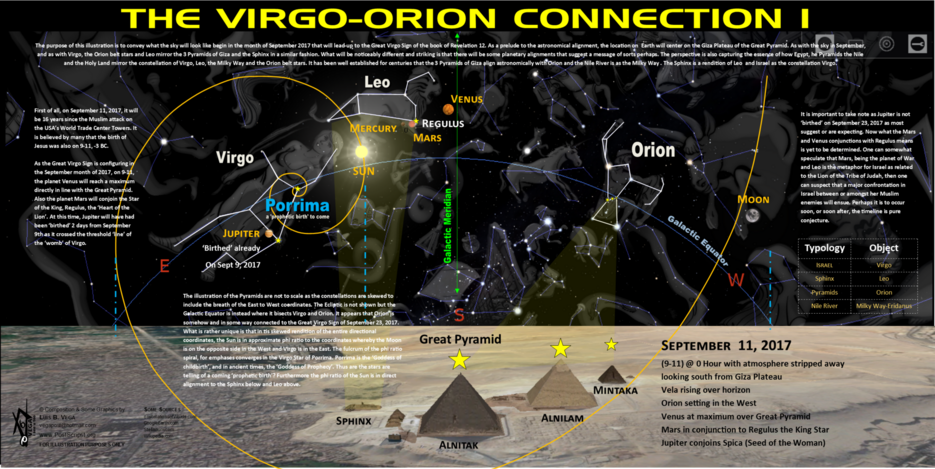 #230:
​VIRGO-ORION CONNECTION
PROPHECY OF A BIRTHING COMING
Cosmic Alignment of the Revelation

The purpose of this study is to convey what the sky will look like beginning in the month of September 2017 that will lead-up to the Great Virgo Sign of the book of Revelation 12. As a prelude to the astronomical alignment, the location on Earth will center on the Giza Plateau of the Great Pyramid on the dates of the 11th, the 20th and the 23rd of September. As in the sky in September, like Virgo, the Orion Belt Stars, and Leo mirror the 3 Pyramids of Giza and the Sphinx in a similar fashion. What will be noticeably different and striking is that there will be some planetary alignments that suggest a message of sorts perhaps. The astronomical alignment perspective is also capturing the essence of how Egypt, the Pyramids, the Nile River and the Holy Land mirror the constellation of Virgo, Leo, the Milky Way and the Orion Belt Stars.

It has been well established for centuries that the 3 pyramids of Giza align astronomically with Orion and the Nile River is as the Milky Way. The Sphinx is a rendition of Leo and Israel as the constellation Virgo when looking towards the southern horizon. In the Fall of every year this depiction starts with the rising of Orion in the East and ends with the setting of Virgo in the West. Amazingly, the Orion belt star of Alnitak that corresponds to the Great Pyramid will be at the zenith or maximum right at the intersection of the Galactic Meridian and the Galactic Equator about high noon. First of all, on September 11, 2017, it will be 16 years since the Muslim attack on the USA’s World Trade Center Towers. It is believed by many that the birth of Jesus was on 9-11, -3 BC. As the Great Virgo Sign is configuring in the September month of 2017, on 9-11, the planet Venus will reach a maximum directly in line with the Great Pyramid on the Galactic Meridian. Also, the planet Mars will conjoin the Star of the King, Regulus, the ‘Heart of the Lion’.

At this time, Jupiter will have had been ‘birthed’ 2 days prior on September 9th as it crossed the threshold ‘line’ of the ‘womb’ of Virgo. This is important to take note as Jupiter is not ‘birthed’ on September 23, 2017 as most suggest or are expecting. Now what the Mars and Venus conjunctions with Regulus, the Star of the King means is yet to be determined. One can somewhat speculate that Mars, being the Planet of War and Leo is the metaphor for Israel as related to the Lion of the Tribe of Judah, then one can suspect that a major confrontation in Israel between or amongst her Muslim enemies will ensue. Perhaps it is to occur soon, or soon after, the timeline is pure conjecture. The illustration of the Pyramid Plateau is not to scale as the constellations are skewed to include the breath of the East to West coordinates. The Ecliptic is not shown also but the Galactic Equator is instead where it bisects Virgo and Orion.

The Prophecy of the Birthing
It appears that Orion is somehow and, in some way, connected to the Great
Virgo Sign of September 23, 2017. What is rather unique is that in this skewed rendition of the entire directional coordinates, the Sun is in approximate phi ratio to the coordinates whereby the Moon is on the opposite side in the West and Virgo is in the East. The fulcrum of the phi ratio spiral, for emphases converges in the Virgo star of Porrima. Porrima is the ‘Goddess of Childbirth’, and in ancient times, the ‘Goddess of Prophecy’. Thus, are the Stars telling of a coming ‘prophetic birth’? Furthermore, the phi ratio of the Sun is in direct alignment to the Sphinx below and Leo above relative to the Galactic Meridian.

Precisely on September 20, 2017 what is noticeable about this time and place cosmologically is that the astronomical alignments are approximately 3 days out from the Great Virgo Sign of Revelation 12, it occurs on Rosh HaShanah or YHVH’s Head of the Year. What is highlighted is that during this time, Venus is conjoined at the Star of the King, Regulus in the constellation of Leo. As the depiction renders the Galactic Equator with the maximum noted to be the planet Venus, it is at the approximate intersection with the Galactic Meridian as noted. The following are the typographical associations related to the astronomical correspondences, on Earth as they are in the Heavenalies looking toward the southern horizon…

What is highlighted is that during this time, the triple conjunction of Venus-Mars-Mercury in the constellation of Leo are in approximate alignment as are the Giza Pyramids and the Belt Stars of Orion. These 3 planets are also amazingly aligned by size and mirrored by the relative size order of the Giza Plateau pyramids. As the depiction renders the Galactic Equator with the maximum noted to be Star of the King, Regulus. It is also at the approximate intersection of the Galactic Meridian. What is rather amazing is that using the entire coordinates to scale, it appears that the phi ratio of the end-points just intersecting the horizon on that place and time has the Sun in approximate phi ratio.

Thus, the Sun phi ratio is in relation to the planet Jupiter, which is at the center of the phi ratio spiral fulcrum. To reiterated, the Planet of the Messiah or Jupiter at this point in time is approximately 13 days out from being ‘birthed’ out of the ‘womb’ of Virgo. Now what it all these astronomical alignments means are yet to be determined. Many believe the alignments are pointing to the timing of the Rapture, but as noted, the ‘birthing’ as some would equate the Church Body with is already 13 days out. Furthermore, the Rapture of the Body of Christ with respect to the book of Revelation chronology takes place in chapter 4. As the book of Revelation chronicles 7 raptures, the one coinciding the rapture of the Manchild in Revelation 12 is the 4th one and it will signal the midpoint of the Tribulation.

It is at this time when the oblations in the rebuilt 3rd Temple are stopped by the AntiChrist, the Abomination of Desolation is setup instead and the worldwide persecution of the Jews and Christians begins and are targeted for extermination. This astronomical alignment of the Great Virgo Sign is yet to be accompanied by a 2nd ‘Great Sign’, that of the 7-headed Red Dragon. Many believe that at that time and place the Planet X phenomena will be self-evident in the skies for all the world to see. Others believe it could be the ‘birthing’ or beginning of the advent of the AntiChrist instead as it is tied to the dark side interpretation of Orion, being the coming of Osiris, Apollo, the King of the Bottomless Pit and Lord of the Underworld, etc.
__________________________ 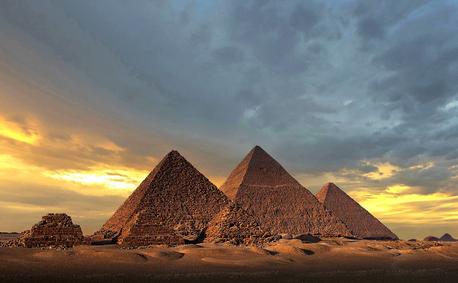