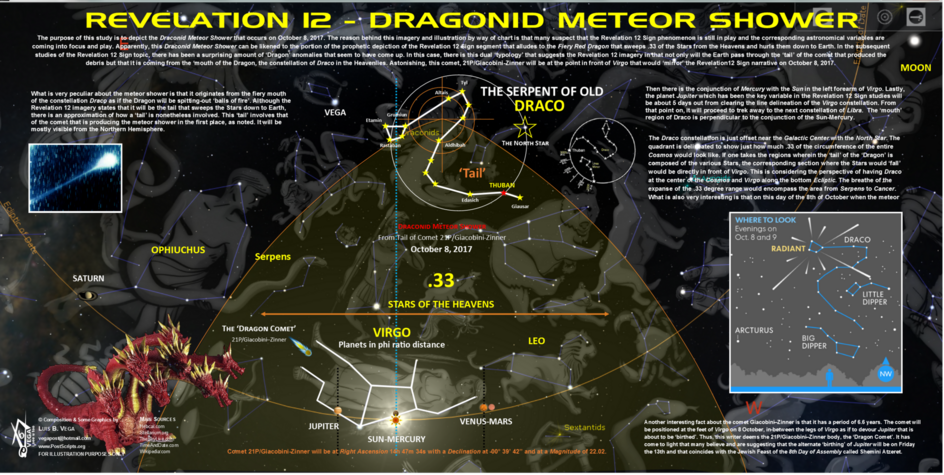 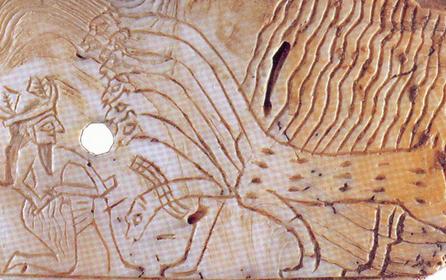 ‘Then another Sign appeared in Heaven: an enormous Red Dragon with 7 heads and 10 horns and 7 crowns on its heads. Its Tail swept 1/3 of the Stars out of the sky and flung them to the Earth. The Dragon stood in front of the Woman who was about to give birth, so that it might devour her Child the moment he was born.’ –Revelation 12: 3-4

The purpose of this study is to depict the Draconid Meteor Shower that occurs on October 8, 2017. The reason behind this imagery and illustration by way of chart is that many suspect that the Revelation 12 Sign phenomenon is still in play and the corresponding astronomical variables are coming into focus and play. Apparently, this Draconid Meteor Shower can be likened to the portion of the prophetic depiction of the Revelation 12 Sign segment that alludes to the Fiery Red Dragon that sweeps .33 of the Stars from the Heavens and hurls them down to Earth. In the subsequent studies of the Revelation 12 Sign topic, there has been a surprising amount of ‘Dragon’ anomalies that seem to have come up. There is the Google ‘cover-up’ of the Giant Red Dragon anomaly that is at the point just outside the ‘womb’ area of Virgo.

This region also has the quadrant of the 666 numerical sequence of the names of the Stars in Virgo. Such a number denotes the ‘Mark of the Beast’, from where the coming AntiChrist will get his power from, that is the Dragon, etc. Then there was the SpaceX Dragon Capsule that was intersected by 2 other satellites named NOAA and Timed as the Revelation 12 Sign came to a climax on the Moonset of the 23rd of September. Then there is this dual ‘typology’ that suggests the Revelation 12 imagery in that not only will the Earth pass through the ‘tail’ of the comet that produced the debris but that it is coming from the ‘mouth of the Dragon, the constellation of Draco in the Heavenlies. Astonishing, this comet, 21P/Giacobini-Zinner will be at the point in front of Virgo that would ‘mirror’ the Revelation12 Sign narrative on October 8, 2017.

The chart accompanying this study by the same name will show that the Draco constellation is just offset near the Galactic Center with the North Star. The quadrant is delineated to show just how much .33 of the circumferences of the entire Cosmos would look like. If one takes the regions wherein the ‘tail’ of the ‘Dragon’ is composed of the various Stars, the corresponding section where the Stars would ‘fall’ would be directly in front of Virgo. This is considering the perspective of having Draco at the center of the Cosmos and Virgo along the bottom Ecliptic. The breath of the expanse of the .33 degree range would encompass the area from Serpens to Cancer. What is also very interesting is that on this day of the 8th of October when the meteor shower reaches its maximum is that there will also be several celestial conjunctions. First, there will be a near-conjunction of the planets Venus with Mars at the head of Virgo.

Then there is the conjunction of Mercury with the Sun in the left forearm of Virgo. Amazingly, the ‘mouth’ region of Draco is perpendicular to the conjunction of the Sun-Mercury. Lastly, the planet Jupiter which has been the key variable in the Revelation 12 Sign studies will be about 5 days out from clearing the line delineation of the Virgo constellation. From that point on, it will proceed to trek away to the next constellation of Libra. The constellation of Draco has 15 main or prominent Stars. The Star Thuban is perhaps the most infamous one. It is usually associated with bad omens of evil and misfortune. What is very peculiar about the meteor shower is that it originates from the fiery mouth of the constellation Draco. It is as if the Dragon will be spitting out ‘balls of fire’.

Although the Revelation 12 imagery states that it will be the tail that sweeps the Stars down to Earth, there approximates how a ‘tail’ is nonetheless involved. This ‘tail’ involves that of the comet that is producing the meteor shower in the first place, as noted. It will be mostly visible from the Northern Hemisphere. The Draconids are sometimes also called the Giacobinids, in honor the man who first sighted the comet that spawned this meteor shower. It was Michel Giacobini that discovered this comet on December 20, 1900. Another sighting of the comet in 1913 added the name Zinner to the comet’s name, which thus became 21P/Giacobini-Zinner. However, some years will see more meteors than in others.

This is due to the degree that the comet Giacobini-Zinner is at when it reaches its Perihelion or closest approach to the Sun. Another interesting fact about the comet Giacobini–Zinner is that it has a period of 6.6 years. As noted, what is astonishing is that the comet will also be positioned at the feet of Virgo on 8 October, in-between the legs of Virgo as if to devour Jupiter that is about to be ‘birthed’. Thus, this writer deems the 21P/Giacobini–Zinner body, the ‘Dragon Comet’. It has come to light that many believe and are suggesting that the alternate ‘birthing’ of Jupiter will be on Friday the 13th and that coincides with the Jewish Feast of the 8th Day of Assembly called Shemini Atzeret. Here is the approximate coordinates of where the comet will be situated in Virgo. Comet 21P/Giacobini-Zinner will be at Right Ascension 14h 47m 34s with a Declination at -00° 39’ 42” and at a Magnitude of 22.02.

It is reported that the comet will be visible to the naked eye and could be viewed with binoculars brighter than 10th magnitude. Another very interesting correlation in terms of the Feasts of YHVH is that the comet will have a connection in the year 2018 related to the Feast of Trumpets. The comet 21P/Giacobini-Zinner will have its closest approach to Earth on September 9, 2018, which will the Feast of Trumpets. The timeframe considered spans the years between January 2013 and December 2075. In 2018, it will also be the 70th year anniversary that the nation of Israel was ‘reborn’. It is perhaps a type and shadow of a type of ‘Jupiter’ that in a near future time a ‘Dragon’ like entity, figure or personage will try to ‘devour’, politically, religiously, and/or militarily. In the meanwhile, it would appear that the Revelation 12 Sign phenomenon is still unveiling its secrets and multifaceted depictions in the sky, astronomically speaking.
______________________