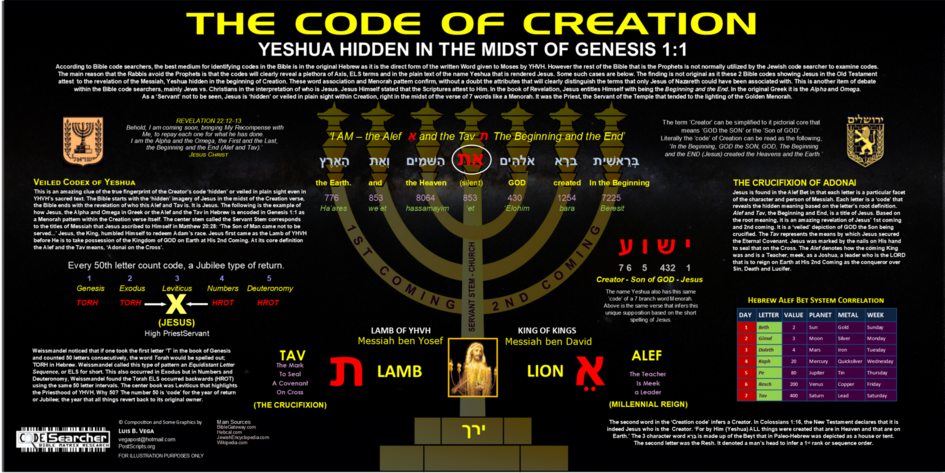 #309:
​THE CODE OF CREATION
PROPHETIC MENORAH PATTERN
Yeshua Hidden in the Midst of Genesis 1:1

‘Behold, I am coming soon, bringing My Recompense with Me, to repay each one for what he has done. I am the Alpha and the Omega, the First and the Last, the Beginning and the End (Alef and Tav).’ - Jesus Christ in Revelation 22:12-13‘

The purpose of this article is to consider the name of Jesus or Yeshua hidden in the 1st 7 words of the 1st sentence of the Bible in Genesis 1:1. What is interesting is that the center word, that being the Alef and the Tav, is silent when read in Hebrew. This study supposes that it truly denotes the invisible attributes of GOD the Son in the creative force present when all that is, was made at the Creation by Jesus, pre-incarnate. The 1st 7 words of the ‘Creation Sentence’ perhaps is serving as a hidden ‘Code’ as other prophetic patterns do exist within the pages of the Bible. For example, there was the original study by Chuck Missler that took the first names from Genesis of the genealogy from Adam. He derived a ‘code of meaning’ by just ascertaining the definition of each name that apparently ‘codified’ the whole Plan of Salvation in summary form.

The Bible reveals that in deed, the whole GOD-Head was involved with the Creation. There was GOD the Father that declared, ‘Let there be light’. Then there was the person of GOD the Holy Spirit in how the ‘Spirit moved upon the waters’, etc. There are other verses in the Bible that also specifically attribute ‘Godhood’ to the Father as well as the Holy Spirit on equal terms. However, this study is focusing on the ‘Code of Creation’ specific to Jesus’ part, the ‘Silent Witness’. It pertains to the notion of who the ‘Beginning and the End, the ‘First and the Last’ theological is. It is Jesus. He is GOD the Son, Jesus yet unrevealed. He is present, there in the plain text as the 4th word formed by the Alef and the Tav. It is the first and the last of Genesis 1:1 as it is revealed in the book of Revelation that concludes all prophecy. In fact, the Bible in Philippians and Colossians teachers that it was Jesus that made all things by Him and for Him, etc.

As noted, the Bible starts with the ‘hidden’ imagery of Jesus in the midst of the ‘Creation Verse’ and the Bible ends with the revelation of who this Alef and Tav is. It is Jesus. This study also suggests that the 7-word Creation Sentence can also be likened to a Menorah pattern. The 4th word, read from right to left in Hebrew, the Alef and the Tav corresponds then to the 4th stem of the Menorah pattern. Coincidentally, it is called and referred to as the ‘Servant Stem’. It is where the 1st light is lit and all the other stems are lit thereafter. The Servant Stem also corresponds to the title of the Messiah that was to 1st come as ‘Messiah ben Joseph’ to serve. This attribute is what Jesus ascribed to Himself in Matthew 20:28: ‘The Son of Man came not to be served but to serve others and to give His life as a ransom for many.’

Thus the term ‘Creator’ can be simplified to its pictorial core that means ‘GOD the SON’ or The ‘Son of GOD’. Literally, the ‘Code of Creation’ can be read as the following, ‘In the Beginning, GOD the SON, GOD, The Beginning and the END (Jesus) created the Heavens and the Earth.’ One of the main themes of the Bible is the person of the King, the Messiah. He is often shrouded with mystery and is hidden in many aspects. For example, the Messiah was to have died and be hid as the Afikoman. Due to Israel’s rejection of Jesus, He hid His face as it were. It will not be until, as Zechariah states that Israel turns to ‘look upon Him whom they pierced’ that Jesus will reveal Himself again to them, as they will say, ‘Blessed is He that comes in the Name of the LORD.’

Hidden ‘Codes’ in the Bible?
There was a famous Jewish Rabi that was a Bible Code searcher. His name was Weissmandel and he spent a lifetime searching hidden patterns in the Torah. He noticed that if one took the 1st letter ‘T’ in the book of Genesis and counted 50 letters consecutively, the word ‘Torah’ would be spelled-out; TORH in Hebrew. Weissmandel called this type of pattern an Equidistant Letter Sequence, or ELS for short. This also occurred in Exodus. However, in Numbers and Deuteronomy, Weissmandel found the Torah ELS occurred backwards (HROT) using the same 50 letter intervals. The center book was Leviticus that highlights the Priesthood of YHVH. Why 50? The number 50 is ‘code’ for the year of Jubilee, the year that all things are redeemed and restored, etc.

It is a picture of the High Priest, the Messiah that procured the redemption and restoration of Humanity. Jesus at the Cross of Calvary accomplished this. According to Bible Code searchers, the best medium for identifying codes in the Bible is in the original Hebrew as it is the direct form of the written Word given to Moses by YHVH. However, the Jewish code searchers that examine Bible Codes do not normally utilize the rest of the Bible, which is the Prophets. The main reason that the Rabbis avoid the Prophets is that the codes will clearly reveal a plethora of Axis, ELS terms for Jesus. In addition, in the plain text, the name Yeshua is rendered ‘Jesus’, which the Rabbis refuse to acknowledge. Thus, there is a debate within the Bible Code searchers, mainly Jews and Christians in the interpretation of who is Jesus when it comes up in Scripture.
‘I AM – the Alef אֵ  and the Tavת  The Beginning and the End’ – Jesus

There are amazing clues that are attributed to the true fingerprint of the Creator’s codes ‘hidden’ or veiled in plain sight, even in His name. The name Yeshua as the word in Hebrew can also be seen as having the same ‘code’ of a 7-branch Menorah pattern. It is a unique supposition based on the short spelling of Jesus. Such also corresponds to the ‘Servant Stem’. It foretold of the servitude Jesus would give to Humanity, no less to redeem such out of all beings that were created. Why humans? Humans are made in the ‘Image and Likeness’ of the Creator. No other created beings, not even the Angels are created with such attributes having the ‘Image and Likeness’ of YHVH.

The following is a comparison of how the Alef and the Tav both can be delineated to expound on the 2 advents of the Messiah, Jesus Christ. Likewise, such advents appear to also follow the 7-branch Menorah pattern. Jesus clearly declared that He is the ‘Alpha and Omega’ in Greek or the Alef and the Tav in Hebrew as it is encoded in Genesis 1:1. What this study wishes to bring out is the similarity of how as a Menorah pattern within the ‘Creation Code’ itself in poignant. As the imagery beginning with Jesus in the midst of the verse is ‘veiled’ in Genesis, this Logos is revealed in the book of Revelation. Jesus Himself stated that the Scriptures attest to His Person. As noted, in the book of Revelation, Jesus is revealed as the ‘Beginning and the End’, the Alef and the Tav. In the original Greek, it is the Alpha and Omega.

As the 4th word of the ‘Creation Code’, it was to be silent, a ‘Servant’ not to be seen. Here is an amazing insight into the disposition of the Creator. In the book of John, it clearly states that it was the Logos, the Word that spoke Creation into existence. In the Beginning was the Word, and the Word was with GOD, and the Word was GOD. This is the mystery of the GOD-Head but one sees that in all the majesty of the spoken Word that is the Creator, Jesus humbled Himself to not speak a word. Jesus at his 1st coming was led as a ‘lamb to the slaughter’. As Isaiah 53 states, ‘He was oppressed and He was afflicted, Yet He did not open His mouth; Like a lamb that is led to slaughter, And like a sheep that is silent before its shearers, So He did not open His mouth.’

Jesus was ‘hidden’ or as if He kept ‘silent’ yet was the mighty Logos that spoke Creation into existence from nothing. It was Jesus there in plain sight within Creation, right in the midst of the verse of 7-wo rds like a the High Priest tending to the Menorah. With Israel, YHVH gave the High Priest, the Servant of the Temple to tend to the lighting of the Golden Menorah. However, the Jews failed to realize and accept that their Messiah, Jesus first had to came as the Lamb of YHVH before He is to take possession of the Kingdom on Earth at His 2nd Coming. Sadly, to the Jews, Jesus remains ‘veiled’ to an extent. YHVH covered them in part with spiritual blindness due to their rejection of Jesus. Presently, YHVH has gone to the Gentiles, as Jesus was a ‘Light to the Gentiles’ that Israel should have been. The ‘Light of the Gospel’ has been given over to a ‘Spiritual Nation’, a Royal Priesthood that has handled the Light of the World since the 1st Pentecost. Such have had the pleasure and challenge throughout the Church Age to have Jesus ‘shine’ as many look upon the faces of Jesus’ Disciples.As Jesus came the 1st time to fulfill the 1st 3 Feast of YHVH, those being Passover, Unleavened Bread and First Fruits, so Jesus will return to fulfill last 3 Feasts, which are Trumpets, Yom Kippur and Sukkot.
__________________________