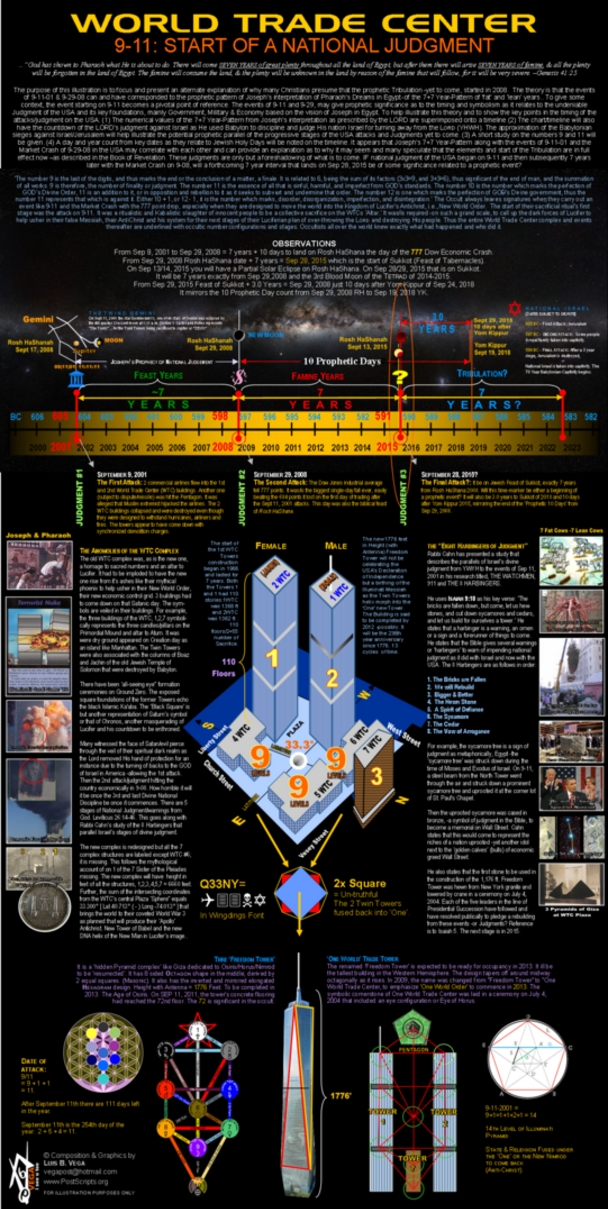 …’God has shown to Pharaoh what He is about to do. There will come 7 years of great plenty throughout all the land of Egypt, but after them there will arise 7 years of famine, and all the plenty will be forgotten in the land of Egypt. The famine will consume the land, and the plenty will be unknown in the land by reason of the famine that will follow, for it will be very severe.’  –Genesis 41:25

The purpose of this study is to focus and present an alternate explanation of why many Christians presume that the prophetic Tribulation -yet to come, started in 2008. The theory is that the events since 9-11 can and have corresponded to the prophetic pattern of Joseph’s interpretation of Pharaoh’s dreams in Egypt -of the 7+7 year-pattern of ‘fat’ and ‘lean’ years. This is taken from a Judeo-Christian world point of view. To give some context, the event on 9-11 becomes a pivotal point of reference. The events of 9-11-01 and 9-29-08 may give prophetic significance as to the timing and symbolism as it relates to the undeniable Judgment of the USA and its key foundations, mainly its government, military and economy.

To help illustrate this theory and to show the key points in the timing of the attacks/judgment on the USA the following items will be presented and examined. The numerical values of the 7+7 Year-Pattern from Joseph’s interpretation as prescribed by YHVH of the Bible is superimposed onto a timeline. The chart/timeline will also have the countdown of the YHVH’s judgment against Israel as He used Babylon to discipline and judge His nation Israel for turning away from YHVH. The approximation of the Babylonian sieges against Israel/Jerusalem will help illustrate the potential prophetic parallel of the progressive stages of the USA attacks and Judgments yet to come. A short study on the numbers 9 and 11 will be given. Lastly, a day and year count from key dates as they relate to Jewish Holy Days will be noted on the timeline.

It appears that Joseph’s 7+7 year-pattern along with the events of 9-11 and the Market Crash of 9-11 and on 9-08 in the USA may correlate with each other and can provide an explanation as to why it may seem to speculate that the elements and start of the Tribulation, as described in the book of Revelation are in full effect now; these are only but a foreshadowing of what is to come. If national judgment of the USA began on 9-11 and then subsequently 7 years later with the Market Crash on 9-08, will a forthcoming 7 year interval that lands on Sep 29, 2015 be of some significance related to a prophetic event? Perhaps this will be the 3rd and final preverbal ‘nail on the coffin’ that will seal the judgment of the USA.

The occult always leaves signatures when they carry out an event like 9-11 and the Market Crash with the 777 point drop in 2008 especially are designed to move the world into the kingdom of Lucifer’s Antichrist, i.e., New World Order.  The start of their sacrificial ritual’s first stage was the attack on 9-11. It was a ritualistic and Kabalistic slaughter of innocent people to be a collective sacrifice on the WTCs ‘Altar.’ It was/is required -on such a grand scale, to call up the dark forces of Lucifer to help usher in their False Messiah, their AntiChrist and his new monetary system for their next stages of their Luciferian plan of over-throwing YHVH and destroying His people on Earth. The number 9 and 11 are thus pivotal magic numbers at their service that are sacred to that dark kingdom. Thus the entire World Trade Center complex and events thereafter are underlined with occultic number configurations and stages. Occultists all over the world knew exactly what had happened and who did it.

Prophetic Parallels of Israel’s Attacks
-605 BC – The 1st Attack: Jerusalem is sacked and resources plundered. (subject to dispute)
-597 BC – The 2nd Attack:  Some people and members of the Royal Family taken into captivity.
-586 BC – The Final Attack: After a 3 year siege, Jerusalem is conquered and destroyed;

National Israel is taken into captivity, along with articles from the Temple for a 70 Year Babylonian Captivity. Will this also happen to the USA?

September 9, 2001
The First Attack: The ‘official’ story is that 2 so-called commercial airlines flew into the 1st and 2nd World Trade Center (WTC) buildings. Another one was supposed to have hit the Pentagon. It was alleged that Muslim extremist hijacked the airlines. The 2 WTC buildings collapsed and were destroyed even though they were designed to withstand hurricanes, airliners and fires. There are many who speculate and some that have proof that 9-11 was ‘An Inside Job’. There are just too many anomalies that are unexplained. Some recommend documentaries to further look into this matter are good resources. Loose Change 9/11 and The 9/11 CHRONICLES. The Stock Market fell 7% over 600 points on Rosh HaShanah.

September 29, 2008
The Second Attack: The Dow Jones industrial average lost 777 points on Rosh HaShana, another 7% drop. It was/is the biggest single-day fall ever, easily beating the 684 points it lost on the first day of trading after the September 11, 2001 attacks. This day was also the Biblical Feast of Rosh HaShanah. This is a tell-tale sign of the false ‘Luciferian’ Zionists persuasion that control the money supply and the world markets at work completing their assignment in due time.

September 13-18, 2015?
The Final Attack? This time period will commence with Rosh HaShanah in conjunction with a partial solar eclipse and will terminate on the Feast of Sukkot, exactly 7 years from Rosh HaShanah of 2008. Will this time-marker be either a beginning or a mid-point of a significant and prophetic event? It will also be 3.5 years (42) months to Sukkot of 2018 and 5 days after Yom Kippur 2015, the end of the Prophetic 10 Day Judgment from September 29, 2008.

If what the economic experts are predicting, then this 3rd and final attack on the current World Order will pale in comparison to what is coming. For a perspective of the possible calamity, consider that during the Market Crash of 1929 90% of Americans lived in farms and grew their own food. About 10% lived in cities yet 3 million starved to death. In the current data figures from the Department of Commerce, it is reversed, 90% of Americans live in cities and only 10% live and grow their own food on farms. It was for this very reason that the Department of Homeland Security was set up, FEMA and the Patriot act. Such legislation along with unprecedented Executive Orders has set the mechanism to detain mass populations during the coming unrest and chaos.

The old WTC complex was, as is the new one, a homage to sacred numbers and an altar to Lucifer. It had to be imploded to have the new one rise from its ashes like their mythical Phoenix to help usher in their New World Order, their new economic control grid. The complex is based on Orion, thus 3 buildings had to come down on that Satanic day. The symbols are veiled as the 3 buildings of the WTC, 1, 2 and 7 symbolically represent the three candles/pillars on the Primordial Mound of Atum which corresponds to the island of Manhattan. The Twin Towers were associated with the columns of Boaz and Joachim of the Temple of Solomon that were destroyed by Babylon.

Anomalies of the WTC Complex
Many believe that the USA witnessed the face of Satan and his evil pierce through the veil of their spiritual dark realm. It appears that YHVH removed His hand of protection for an instance due to the turning of America’s back to the GOD of Israel in America; this allowed the 1st attack. Then the 2nd attack, a judgment hitting the country economically in 2008 has but locked in the resolve of the USA to continue to be resilient in their defiance of YHVH’s moral laws and standards that have been set aside to build a modern day ‘Tower of Babel’ instead. This goes along with Rabbi Cahn’s study of the 8 Harbingers that parallel Israel’s stages of divine judgment. Since the construction of the new ‘Freedom Tower’, there have been ‘all-seeing eye” formation ceremonies on Ground Zero to commemorate an anniversary. In the new layout, the exposed square foundations of the former Towers echo the black Islamic Ka’aba design.

The ‘Black Cube’ is but another representation of Saturn’s symbol or that of Chronos, another masquerading of Lucifer. How horrible it will be once the 3rd and last divine national discipline is unleashed on Rosh HaShanah of 2015. There are 5 stages of national judgment or warnings from YHVH that the Bible speaks about as it dealt with Israel and the surrounding nations; see Leviticus 26:14-46. The new complex is redesigned but with the same numerical associations with a bit more intrigue. For example all the 7 complex structures are labeled except WTC #6; it is missing. This follows the mythological account of 1 of the 7 Sister of the Pleiades that is also alluded to as missing. As the complex is to be completed, the total combined height in feet of all the structures, 1,2,3,4,5,7 = 6660 feet.

In the old complex, the 3 towers of WTC 4,5,6 had a level of only 9 floors each to combine for a 9-9-9 configuration that is laid out in the 3 belt stars of Orion. It was/is orientated to the East, the origin and source of their ‘Light Bearer’ as in Lucifer. Furthermore, the difference of the intersecting coordinates from the WTCs central Plaza ‘Sphere” equals 33.300° [ Latitude 40.713° ( - ) Longitude -74.013°0.713.° ] These very strong numeric signatures of the 2001 and 2008 attack/judgments clearly send a signal to the rest of the occult world of who really is in control of the world -for now and that it signaled the beginning of a further series of events that will bring the world to an economic implosion and their coveted World War 3. These events have all been planned astronomically to ensure that it will produce their ‘Orion’ Antichrist.

To reiterate, the main purpose of this timeline and chart illustration is to focus and present an alternate explanation of why many Christians presume that the prophetic Tribulation yet to come, started in 2008. The theory presented in this study has suggested that the events since 9-11 can and have corresponded to the prophetic pattern of Joseph’s interpretation of Pharaoh’s Dreams in Egypt -of the 7+7 Year-Pattern of ‘fat; and ‘lean’ years. The 7 year long timespan from 2001 to 2008 was like the ‘fat’ years when there was a boom in the Stock Market and real estate. Then from 2008 to 2015 there was a crash in real estate and the time was characterized by Obama’s bailout of this handler’s auto companies, banks, etc. The Seal Judgments of Revelation 1-6 can and are casting their long shadow upon this ‘Last Generation’ but this present time is not the Tribulation as some would be convinced of it.
_______________________