#169:
​THE COSMIC MERCY SEAT?
CELESTIAL THRONE PATTERN
King Cepheus at the Center of Time and Space

‘Thus says YHVH Heaven is My Throne and the Earth is My Footstool. Where then is a house you could build for Me? And where is a place that I may rest? For My hand made all these things, thus all these things came into being, declares YHVH. But to this one I will look, to him who is humble and contrite of spirit, and who trembles at My Word.’ - Isaiah 66:1-2

The purpose of this study is to show that the cosmos or the ‘heavens’ is perhaps also situated after the pattern of the very Ark of the Covenant. The Ark was as a ‘throne’ or royal chair that in the ancient times a King or Queen would be lifted up by 2 men on either ride and carried. The Throne Chair was a symbol of the authority and justice the King or Queen would allocate and represent. Could this be no different in the very Cosmos as the Bible does teach that YHVH Himself attributes to having a ‘Throne’ that encompasses such a vast Creation? In fact, the Bible discloses that aside from the apparent ‘fixed’ Throne of Heaven, YHVH has a portable Throne Chair. This is the true ‘Chariot of the Gods’ in that it is called a Merkavah. This is what Ezekiel saw in his revelation of the Almighty.

If one uses the Stereographic view of the Universe in software model, one can clearly see that there are 2 ‘sentinels’ on each side of the cosmos. These are Ophiuchus and Orion. These are the ‘Guardians of the Galaxy’ metaphorically as they guard the Gates of Heaven, the Golden Gate, and the Silver Gate. They both have a corresponding star that are part of the 4 major cardinal points of the Universe. The Golden Gate is accented by the star or sun Antares in Scorpio. The Silver Gate is accented by the star Aldebaran in Taurus. It appears that YHVH delights in dualism and the law of opposites as both the ‘Sentinels’ and the guardian stars all stare with a similar first letter.

This very remarkable attribute about the cosmic depiction of the celestial ‘Mercy Seat’ of YHVH is that the Horizon circumference provides the 4-cardinal point in which a cross-section is construed by the Galactic Meridian. The adjustment or angle of the depiction is at a 33-degree inclination to the Galactic Meridian. This is exactly how the Temple Mount is construed in Jerusalem. This perhaps provides some clues as to where the actual Holy of Holies and the Ark were on Earth based on its cosmic counterpart. This also lends some credibility that the Temple was on the Temple Mount and not anywhere else. Another mathematical relationship is pertaining to the Celestial Gates in relation to the enthroned King at the center of the Universe. This ‘King’, Cepheus and thus the Mercy Seat is in approximate phi ratio distance to the Gates of Heaven that is the Golden Gate next to Ophiuchus and the Silver Gate next to Orion.

As noted, it is rather interesting that both ‘Guardians of the Gates’, Orion and Ophiuchus start with the letter ‘O’. It is the 15th letter in the alphabet and was connected to meaning an ‘eye’ since the times of the Phoenicians. Each of the ‘Celestial Cherub’ are opposing each other at a 180-degree angle. They are more or less depicting themselves as if they were the Cherub of the Ark of the Covenant at each end of the Royal Chair of YHVH. This specific article from the very throne room of YHVH was given as a model to Moses to replicate and have in the Tabernacle and subsequent Temples. This facsimile on Earth was to represent the presence, justice, and dominion of the Creator amongst YHVH’s People as a King.

What is amazing is that at the center near the North Star or Polar Star is Cepheus, the King. Cepheus is the enthroned King. Thus, it could be suggested based on the Mercy Seat of YHVH astronomical typology that at this place in-between the 2 Gate Keepers is a type of the ‘Throne Chair’, as in the Ark of the Covenant type. Cepheus is connected to the North Star from where every other star in the known Universe revolves. Thus, if one ever looks up at the stars in the heavens at night and one finds the fulcrum of the Universe, there the ‘King’ of the Universe will be found. Next to him is his Queen, Cassiopeia. Of course, this study is not directly insinuation that at this precise location is the Throne of YHVH but as a divine pattern, it is apparently a magnificent type.

The following is an excerpt from the E.W. Bullinger’s book the Witness of the Stars. It details the research of the true and original connotation of the meaning of the constellation Cepheus, the King. The outline will be given in paraphrase form. Cepheus is the Crowned King. He is the Redeemer coming to rule the Earth. This is attributed to Jesus Christ, the King of Kings and Lord of Lords. He is presented as a glorious King, crowned, and enthroned in the highest Heaven. He has a scepter in his hand and his foot is planted on the Polar Star. His name in the Dendera Zodiac of Egypt is Pe-ku-hor, which means ‘this one cometh to rule’. In the Greek mythology, his name by which he is now known, is Cepheus.

The name Cepheus comes from the Hebrew and having the Messianic signature of ‘the Branch’. He is called by Euripides ‘The King’. In the Ethiopian sacred texts, his name was Hyk, ‘a King’. There are 35 stars, 3 of the 3rd magnitude, 7 of the 4th, etc. The brightest star is in the right shoulder of the King and is called Al Deramin from the Arabic. It means ‘coming quickly’ although in some versions it has been attributed to ‘The Right Arm’. The next brightest star is in his belt. This star is named Al Phirk which means ‘The Redeemer’. The next star is in the left knee called Al Rai. This star means ‘He who bruises or breaks’. There can be no doubt that this cosmology is of the Christ, Jesus. He is the glorious King of the Universe, of Israel, of the World who is coming as the Lion King of the Tribe of Judah along with His Bride to the rule from the Mercy Seat.
______________________ 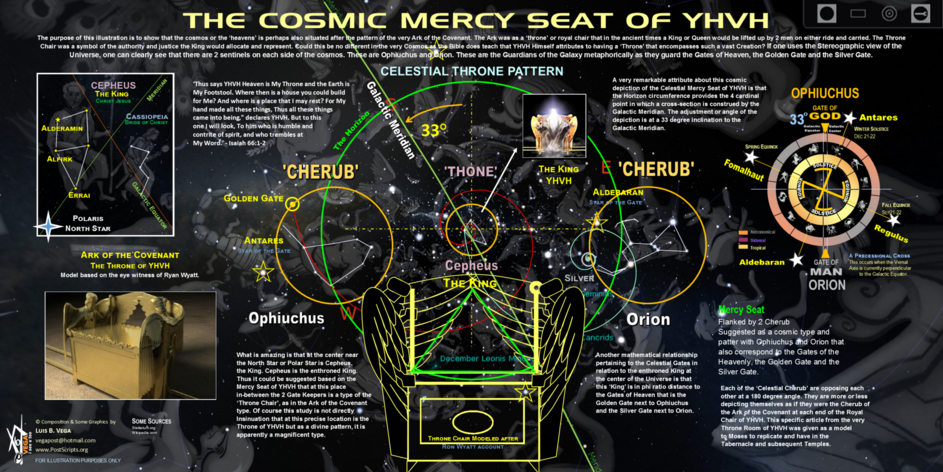