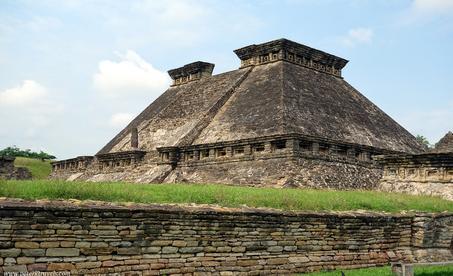 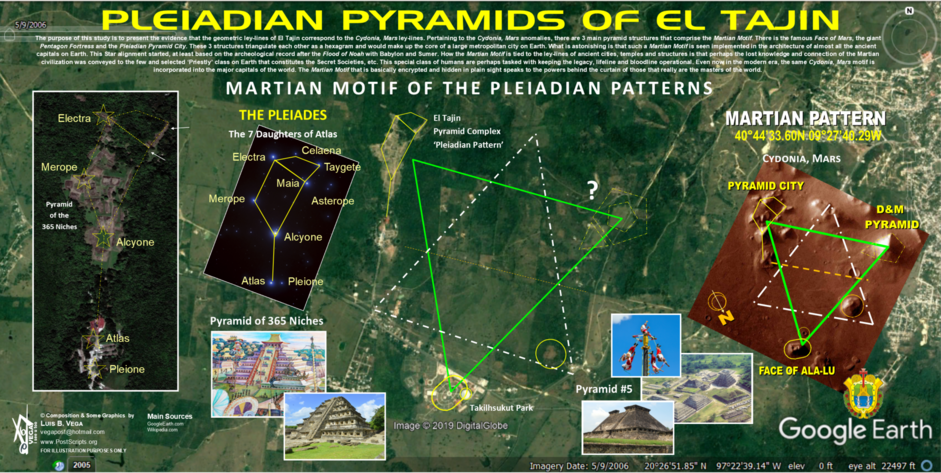 The purpose of this study is to present the evidence that the geometric ley-lines of the pyramid complex of El Tajin in Veracruz, Mexico is configured to the Cydonia, Mars ley-lines. Pertaining to the Cydonia, Mars anomalies, there are 3 main pyramid structures that comprise the Martian Motif. There is the famous Face of Mars, the giant Pentagon Fortress and the Pleiadian Pyramid City. These 3 structures triangulate each other to for a ‘hexagram’ and would be as large as the core of a large metropolitan city on Earth. What is astonishing is that such a Martian Motif is seen implemented in the architecture of almost all the ancient world capitals on Earth like El Tajin. This phenomenon started, at least based on the archeological record after the Flood of Noah with Babylon and Sumer.

How the Martian Motif is tied to the ley-lines of ancient cities, temples and structures is that perhaps the lost knowledge and connection of the Martian civilization was conveyed to the few and selected ‘priestly’ class on Earth that constitutes the Secret Societies, etc. This special class of humans are perhaps tasked with keeping the legacy, lifeline and bloodline operational. Even now in the modern era, the same Cydonia, Mars motif is incorporated into the major capitals of the world. The Martian Motif that is basically encrypted and hidden in plain sight speaks to the powers behind the curtain of those that really are the masters of the world and who holds its secrets from other planets perhaps even.

As it pertains to El Tajin pyramid complex, the following highlights of the site will be presented for context based on research. El Tajin is believed to have been built around 600 AD and peaked around 1200 AD. No one really knows for sure who built it although the Totonacs claim that their descendants did. What is very peculiar about this site in Meso-America is that its architecture is unique unlike most other types found in Mexico. Also, cement was used as mortar that no other pyramid site in all of Mexico had or knew about. Probably the most famous pyramid in the complex is called the Pyramid of the 365 Niches.

This is because the pyramid, like most others were aligned to the Sun, Moon and Stars. In this case, this study strongly suggests that it mirrors the Pleiades Star Cluster in a North-South direction. Moreover, it is part of the hexagram triad of the giant Pentagon Pyramid and the Face of Mars. The Pyramid of the 365 Niches is very unique in its style that almost resembles ancient Chinese and/or Asian style. The very top of the pyramid was fashioned with curved roofing as one would find mostly in Asiatic civilizations. It would stand to reason as the Amerindians are essentially Asiatic in DNA stalk.

Star Alignments
There is a theory that suggests that Mexico in ancient times was a major world intersection of cultures and races. There is evidence to suggest this such as in Monte Alban where there are stone carvings of white lean bearded men. Perhaps such visited or had settle in such an area. Then the famous round heads that appear to be Negroid in racial features purports to have been from those coming from Africa for example. Perhaps El Tajin was such an ancient cosmopolitan type of ‘New York’ whose architecture and style was heavily influenced by the intersection of many cultures, from people, visitors, explorers from Europe, Africa and Asia perhaps even from other planets. Specific to the Cydonia, Mars pattern, the El Tajin layout does seem to approximate the Pleiades Star Cluster alignment.

If one superimposes the Star layout, the motif starts with the modern facility that makes up the entrance to the site on the southside. Interestingly there are 2 oval round-a-bouts that correspond to Atlas and Pleione. Then there is a short distance to the core of the pyramid complex where there is a 4-pyramid composition that makes up a plaza at the center. This center-point marks where the Star, Alcyone would correspond. In various other ancient capital layouts, the pyramids themselves would correspond to the Stars of the Heavens. In this case, it is a reversal effect. Then the ley-line to the left goes directly in line and angle corresponding to the Pyramid of the 365 Niches. This amazing pyramid would correspond to the Star Merope. The subsequent lay-line from this point then travels to the edge or north where the lesser pyramid types correspond to the Star, Electra.

What is very notable is that the entire layout of El Tajin does correspond to the Pleiades alignments, even to the very corners as it is the case on the right side heading north. The ley-line even merges in the same angle and the corners match nearly exactly as the Pleiades Star Cluster does, amazing. For example, in this case of El Tajin, the corner Star corresponding to Taygete and Celaene appear to be still covered in jungle and/or dirt and are not fully exposed of what is under there. Since 1992 when the site became a World Heritage Site, there have been numerous of discoveries still being made. In terms of the Pleiades Star Cluster’s relationship to the  hexagram layout of Cydonia, Mars, can one find a ‘Face of Mars’ configuration in this vicinity? Yes. In the case of El Tajin, the Face of Mars would correspond to Takilhsukut Park.

It so happens to have an oval shape and angled just as the one in Mars is. The difference is that this Martian Motif on Earth at El Tajin is 180 degrees inverted. What the layout does not fully reveal is the corresponding giant Pentagon Pyramid. There is an approximate area that does have corresponding angled wedges facing the correct direction as would the giant Pentagon on Mars but based on the aerial view from Google Earth, there does not seem to be any type of elevated pyramid structure. However, as with other mapped-out Martian Motifs already identified, ancient and modern, there does not have to be a structure necessarily but an outline that could be marked by roads, and/or natural formations. What is also very unique about the El Tajin pyramid complex is the number of ball courts found.

The Prime Directive
No other site in all of Meso-America has this many as it suggests it was then a major sporting center of the ancient world. What is also very striking is that the Pyramid #5 is very unique and even ‘odd’ in comparison to the styles that comprise the pyramid city of El Tajin. As those that appreciate ancient archeology and even Astro-Archeology, one can say that this pyramid seems out of place and essentially ‘not of this world’. What is morbid though about its simplicity is that atop this pyramid are 2 flanking serpent dragons. What is also notable is that according to research, this entire pyramid city complex was made all at once, not in successive waves a most other Meso-American pyramids were commonly constructed. The style, simplicity and composition are breath-taking. Which leads to the supposition of this study.

As with most all major ancient capitals, the Cydonia, Mars pyramid complex array of the hexagram layout seems to reverberate across the world as a ‘template’ and standard to copy. Why? And this template is found not only on Earth but on another planet? Who was buried in the Face of Mars that the Sumerian Creation Account states was a ‘tomb’ to honor a ‘Fallen King’? Consider who must have been this personage, this ‘King’, Rebel King of Nibiru that was made a mausoleum so grand, it comprised the length of an entire mile. And the ‘Face of Mars’ is able to be seen from space. Whomever this Ala-lu person or ‘deity’ was and is, will be amazing to understand some day perhaps. Whom showed this ‘template’ on Mars to the humans on Earth? Where they the Fallen Angels? Were they other fellow humans that had out-of-body experiences and did Astro-Travel projections and went to Mars perhaps?

As with every Meso-American Creation Account, the common mythos is that ‘Star People’ came from the Pleiades and Orion or the Star Vega and showed Humanity the ways of ‘civilization’. And that they promised to return at the end of the ‘Age’ to save Humanity from itself. Was this Cydonia, Mars motif used because in some way, the Earthlings believed they would or could access divine superpowers or abilities if they did? Or where they instructed by the very ‘Star Beings’ to build such pyramids according to their once ‘home’ that was in the Pleiades or Orion? Perhaps the ‘beings’ that showed the High Priests of earthly civilizations told a ‘Creation Story’ of how they came from the Pleiades or the Belt Stars of Orion as the ‘Gods’ that created or ‘seeded’ Humanity and thereby taking credit and glory away from YHVH, the true Creator of all this is.

Perhaps such were the Angles of whom the Bible speaks that forsook their 1st Estate and violated the ‘Prime Directive’. What was the Prime Directive. This sounds like Star Trek. It does. Is there any reason why the writers and directors of the TV series know of such a concept? Where did they get this from? They apparently where ‘in the know’ of how according to ancients texts like the book of Enoch and the Giants that YHVH, the Creator of the whole Universe gave a ‘Prime Directive. It was that the Angels assigned to each planet or Star but in this particular case, Earth were to help Humanity advance and be taught in the knowledge and wisdom of YHVH. Imagine that? Thus, the concept of there being ‘Guardian Angels’ rings true.In the case of Humanity, it is said in Genesis that humans, male and female were made in particular as no other living beings ever were created. In what way? In that such human beings were to have the ‘Image and Likeness’ of the very Creator, YHVH. Thus, this seemingly lowly type of beings possessed the ‘divine attributes’ that no other created being had or has had or perhaps will ever have. This includes the mighty Angelic races and all their different ranks, etc. Consider the jealousy that might have ensued and did according to the Bible and other extra-Biblical narratives. It was the Watchers that became obsessed with the beauty and form of the human women on Earth and against the Prime Directive, they conspired to violate that condition.

Instead of teaching Humanity the ways of YHVH, they taught Humanity the ways of war, sorcery, abortion, drugs, etc. This violation reverberates through the fallen race of Humanity as a result and will to the very end until the return of Jesus Christ. And that they, the Angelic Beings that indeed perhaps came from the Pleiades or Orion where they were ‘stationed’, in some way morphed and were able to sexually have intercourse physically with human women to procreate a hybrid being, half human and half Angelic Being. Imagine that. Such are the legends, mythology and mythos of the Demigods that ruled the ‘Golden Age’ of Saturn on Earth for example. Perhaps the various earthly civilization like the one built in El Tajin was such a complex that was made to astronomically align their pyramid as a witness to the expectation of the soon return and 'intersection' of their demigods from such Stars and planets.
______________________