‘But GOD has revealed them to us through His Spirit. For the Spirit searches All Things, yes, the Deep Things of God.’ -1 Corinthians 2:10

The purpose of this study is to promote the Video Exposé of Dr. Michael Heiser’s Book Version of ‘The Unseen Realm’. Many perhaps have already heard/read/seen the Work of Dr. Michael Heiser. The Presentation, in one’s Opinion, is masterfully composed and disclosed. Why bring this Topic up again of the Supernatural and connection to the ‘Deep Things of GOD?’

It is Topic that one considers, consists of ‘Digging Deeper’ into the ‘Deep Things of GOD’ and why that is hard for most Followers of Jesus to want to do. Why? It can get ‘Scary’ as it deals with Venues for Opening Doors to the Supernatural is compelling, and what one would agree is what is going on. Here is the Video Link.

As the Rapture approaches, the Wall is becoming ‘thinner’ for such Supernatural Occurrences to Manifest. Heiser’s Video will delve into looking at what is ‘Behind the Spiritual Curtain’ in the Spiritual Realm, Warfare. After all, the Body of Christ is presently on this Side of the Rapture, in a Spiritual War and behind Enemy Territory. And as the Apostle Paul taught, the Body of Christ, on Earth, wrestles not with Flesh and Blood.

So, for a Follower of Jesus, ‘Ignorance is Bliss’ is a ‘Luxury’ it cannot afford to be in, in general at this Time. It is and it can be a State of being Care-Free but now is the Time to be into the Deep Things of GOD. That is one’s Point. Now what is that? It can be Subjective and for each Believer, it might be and is different. One such Topic is what Dr. Heiser presents. Such Teaching is not taught in Churches.

And the Enemies of the Cross would want nothing more than Believers to ‘Ignorant of the Devils’ Schemes/Devices’, etc. Or to be either a Lukewarm Christian, a Chocolate Soldier, a Compromised Christian, an Apostate, or one that knows better but decides to ‘Take it Easy’. One is not saying or suggesting that just because many Faithful Disciples of Jesus do not study Prophecy, for example, that they are not ‘Spiritual’ or have to be ‘Approved’ of Jesus in doing so.

Spiritual Warfare
Prophecy, in one’s Opinion would fall under the ‘Deep Things of GOD’, perhaps. Many may not be genuinely into it or into Numbers, Astronomy or such Topics. Case in point is one’s Interest in the Rapture, as many might be or are like-minded. But not so much as to other Topics like delving into what is the Outer Darkness or if the Raptured Saints will stick around for 40 Days before being Beamed-Up, etc. And one is not advocating going ‘Rambo’ either, as one knows that the Battle is in the Mind, for the Soul of every Human Being made in the Image and Likeness of YHVH.

And above all, one’s Warfare as a Disciple of Jesus is fought on one’s Knees, in Prayer. But many in these Last Days within the Church, especially in the USA and Europe are either Asleep or Apostate. And it is perhaps, as a direct result of not ‘Digging Deeper’ into the Deep Things of GOD. That is the Point. And Prophecy is the last thing many in the Church, sadly, want to touch or Dig Deeper into. In one’s case, it is not to just get more Head Knowledge or brag about how many ‘Years’ one has ‘Studied’ Prophecy. ‘Big Deal’, as they say. It is or one thinks it should be born out of a Genuine Desire to Know Jesus Better or Deeper.

And that can take many Forms or Venues based on one’s Gifts, etc. But in either case, here is the issue. In doing so, it takes Time, Effort, Discipline, Patience. And above all, one has to come before the LORD of Revelation, Jesus. And as it was with every Prophet, Apostle, like Daniel, Joseph, Isaiah, Jeremiah, Paul, John and every other Man or Woman of YHVH, when in Jesus’s Presence to be Revealed something, Jesus’ Eyes of Flame will pierce one’s Heart, Mind and Soul. That State of Exposure and Vulnerability can be and is often Times, Uncomfortable. It is because if one encounters Jesus, one will not be left the same.

In one’s case, Jesus will have to Burn the Dross and make one a Vessel worthy of any Prophecy given of Insights. At least that has been one’s Understanding and has been one’s Experience. The Point is, how can Jesus trust one, with Unconfessed Sin, or Duplicity, or not being Faithful with what ‘Little’ Jesus has Revealed to one in the 1st Place? Or what Good would it be to ‘Know’ all these ‘Deep Secrets’ if one keeps that to oneself? Actually, that was one’s Situation before going ‘Public’, as one only shared Studies and Meditations, Theories with Immediate Family and Friends. One was content with that and had no intent nor desire to go beyond that.

One realizes that most ‘Christians’ are not into such ‘Deep Things’, which is fine and one surely does not want to push any Interpretations or Understandings on anyone. One only Studies, Observes and Reports. But the End of the End of Days draw closer by the Day, and as those that are Watching for the Blessed Hope and the Appearing of Jesus, i.e., the Rapture, the Day Approaches, based on how the Conditions on Earth are now, as in the Days of Noah in this Last Generation. It is one’s Opinion that the Bride of Christ need this Knowledge and Understanding, of the ‘Deeper Things’, not for itself and Peace of Mind, but to explain and give such Reasons for the Circumstances that are fast leading-up to the Rapture and what is to come thereafter to one’s Neighbors, Friends, Colleagues, etc. What are the Deeper Things of GOD?

Deep Things
As mentioned, that Question and Answer can be Subjective. This is perfectly fine as it is understood that the Body of Christ has different Gifts. But Dr. Heiser’s Work, here, is 1 example of 1 such Topic that is of Interest that one thinks is a ‘Deeper Thing’. Dr. Heiser has done an Amazing Work in exposing the Unseen Realm that is Real, Scary and Dangerous. Anyway, one is sharing Dr. Heiser’s Video Exposé, over an Hour long and with lots of Ads but Well Worth the Watch.

Now the Video will delve into the ‘Deep Things’, so beware and perhaps some of the Concepts and Interpretations may seem ‘Out-There’. One example is how it will be discussed that YHVH or the Name of GOD, is likened to the ‘Angel of the LORD’. To be clear, YHVH or Jesus is NOT an Angel Class. It will be clarified even in the Video. The Term is more so used of the Notion to mean, Messenger. Another Discrepancy one would disagree with is that Heiser believes that Angels do not have Wings. Well, some do. There are the ones with no Wings for sure, the ‘Lower Class’.

But then there are the Angelic ones with 4 Wings, the Cherubim and 6 Wings, the Seraphim, etc. And why is this Topic important or noteworthy? It is because the Demons, Fallen Angels will be Manifesting themselves after the Rapture. This Notion is spoken about in the Book of Enoch and in the Book of Revelation when Jesus sends an Angel to open-up the ‘Other Door’, the Door to the Bottomless Pit. It is the Abyss where the Titans have been Chained-Up for this very Time coming during the Last Week of Daniel. Jesus will go ‘Star Wars’ on the Earth.

He will speak to the Spiritual Stronghold that Moses and Joshua had to Eliminate before going into the Promised Land. What do those ‘Spiritual Strongholds’ look like and is there a Corresponding Physical Manifestation of them in the Promised Land and around the World? Yes. This is why one wrote the Trilogy of the Return of the ‘Martian Saviors’. Dr. Heiser correctly identifies the ‘Why’ and ‘What’ for the Anunnaki and puts an Objective Review of all that transpired, Supernaturally behind the Scenes that is not evident at 1st when reading the Bible.

Or how most just brush aside such Verses as being ‘Exaggerations’ of Giants, and Demons, Possessions, Strongholds, etc. But it is all true. And to that end, the Trilogy is based on one’s Research into those Sacred Sites that were the Physical Configuration based on Sacred Geometry or Geometry and Math? Why? Apparently, the Spiritual Realm is set-up that way in its constitution all over Earth. How so? One suggests, based on Google Satellite Topography, that these Strongholds are found to be a Replica of the Pyramid Triangulation found on Cydonia, Mars.

This, to suggest that these Fallen Angels and Giants had direct contact with those Stationed, like on Mars, and still do. And that is how all the Physical Strongholds in the Promised Land, for example, were such ‘Hot Spots’ that produced a Nexus for such Fallen Angel Entities and Demons to traverse Dimensions. It is a Spiritual Grid or Map, if one wills of how such Sacred Places were places of Sacrifice and Demonic Activity. And why Blood was required, as in Human Sacrifices, Child Sacrifices, etc. Why?

Life Source
The Life is in the Blood. Apparently, in the Demon Realm, the Life Energy Force given by the Creator is harnessed to open such Triangulated Points for the purpose of opening the Spiritual Portals. That is basically it and why YHVH Commanded ‘Genocide’ of these Giant Tribes, precisely at these places throughout the Promised Land. That is why the Command came from YHVH to Moses and Joshua to Destroy and cast down every Physical Stronghold.

Realize that Moses was a Giant Slayer as he went all the way up to the Border of the Golan Heights, to Basan. Why? To tear down the Asherah Poles or Obelisks, and High Place in the Groves…like Bohemian Grove, and Kill the Giants, etc. See example of such a Cydonia, Mars Triangulation of Edrei where Moses and Joshua carried-out their Operation.

And as it was for Israel, in the Physical Sense, so too is the same Principle and Expectation of the Warrior Bride. She must ‘Demolish’ all those Thoughts, Deeds and Words that come against the Knowledge of Jesus’. And this is again, done now within one’s Mind, Body and Soul through Prayer. Of course one’s Actions then follow as certain Circumstances require Acts to be followed-up with. 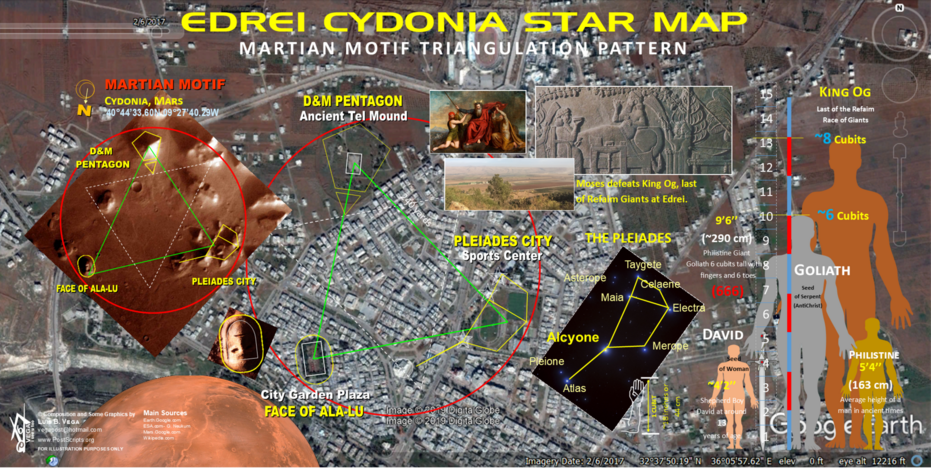