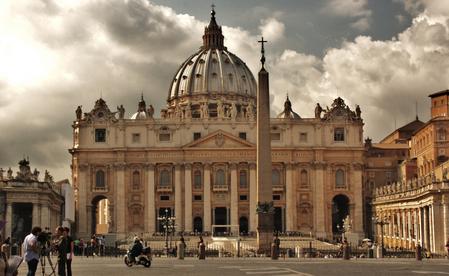 #172:
​VATICAN STAR MAP
THRONE OF THE QUEEN OF HEAVEN
Astronomical Alignment from Sirius to Pleiades

‘Pay her back even as she has paid, and give back to her double according to her deeds; in the cup which she has mixed, mix twice as much for her. To the degree that she glorified herself and lived sensuously, to the same degree give her torment and mourning; for she says in her heart, 'I SIT as A QUEEN AND I AM NOT A WIDOW, and will never see mourning. For this reason in one day her plagues will come, pestilence and mourning and famine, and she will be burned up with fire; for the Lord God who judges her is strong’. –Revelation 18:7-8

The purpose of this illustration is to suggest that the Vatican complex in Rome is patterned after the cosmic alignment form Sirius to the Pleiades. The religion of Rome is the same religion of Nimrod, the 1st Mason after the Flood of Noah that set up this Babylonian Mystery Religion. The Bible portrays this conspiracy as a counterfeit of the true revelation of the true Church and Christ, the Manchild. It is Israel from where Jesus as the Messiah was brought forth as the true Savior of the world. The Roman religion is a continuation of this ‘mystery’ since Nimrod. It sets the Queen of Heaven, Lucifer as Sirius and his consort, Orion with its complimentary sexual union at the Obelisk that crowns the Piazza in front of the Vatican Basilica. The Piazza with the Obelisk and 2 fountains correspond to the Belt stars of Orion.

It is a rendition of the phallus or Shaft of Baal. Wherever there is a dome and obelisk architecture, it is a euphemism of this Sirius and Orion union that ‘impregnates’ the vector in which a ‘Manchild’ is to be birthed, that is the ‘Christ’. This is the quest of the Roman religion that will one day ‘birth’ the AntiChrist Manchild. From the Altar of the Basilica, which means ‘throne’ to the Obelisk or phallus of Osiris is approximately 999 ft. As the constellations are in phi ratio to each other and in themselves, the Obelisk of Orion in the Piazza is in approximate phi ratio to the Altar in the Basilica. As for the Vatican, the Bible states that the ‘throne of the Queen of Heaven’ is a habitation of demons and every foul and filthy spiritual entity.

It is the stronghold of the Fallen Angels that corresponds the Castel Sant'Angelo pentagon. Its perimeter is 2520 ft based on approximate GoogleEarth coordinates. In the Luciferian antitype, the center of the ‘angelic’ fortress pentagon is the ‘Eye of Lucifer’ corresponding to the star Aldebaran. This Satanic stronghold pentagram corresponds to the 5 stars of the Hyades in the head of Taurus with the prominent one being Aldebaran. Even some of the city street ley-line and directions match the cosmic angles of the constellation motifs. From the Alter of the Basilica to the center of the Angelic fortress is 33 arcseconds. The ‘Eye of Lucifer’ or Aldebaran at the Fortress of the Angels is in approximate phi ratio to the Altar in the Basilica, etc. The Pleiades star cluster corresponds to the area of the Supreme Court or highest judgment of the land.

In turn the corresponding depiction of the Pleiades is topographically across the Field of Mars, Campus Martius which is adjacent to the ancient Roman Forum. This Forum is encompassed by the 7 Hills of the Harlot. This is but a segment of the entire storyline of each of the 12 Signs of the Mazzaroth or Zodiac that this study suggests the Vatican is modeled after. The motifs usurped by the Mystery Babylon has an astronomical correspondence that takes on the Luciferian interpretation that the Vatican is designed upon. This depiction within the Vatican layout is a corruption of the true one. It is the antitype of the Virgin, Christ, the Holy Angels, and the Church depicted in the book of Revelation.

One reason why this portion of the cosmos or Mazzaroth is so inscribed around the world in the most prominent of places and temples of the world capitals is that this region has the concentration of the brightest stars in the Universe and perhaps the very thrown of YHVH. This region is said to be where the Fallen Angels and their ‘Queen’ Lucifer rebelled and were expelled from, thus the very Throne of the Creator, YHVH. This cosmic composition superimposed over the Vatican is but a counterfeit of the real association. This portion of the Cosmos is defining the work of Jesus Christ, the true Orion, taking the wrath of YHVH as it were Taurus as He is shielding His Bride, Sirius. It was on the cross that Christ Jesus was pierced and died for the sins not only of the whole world but to extract from it a Bride, as in the Pleiades. It is from the Church that the Virgins, the 7 Churches of Asia are called to be vigilant to be made ready to one day be taken as a Bride.
__________________________