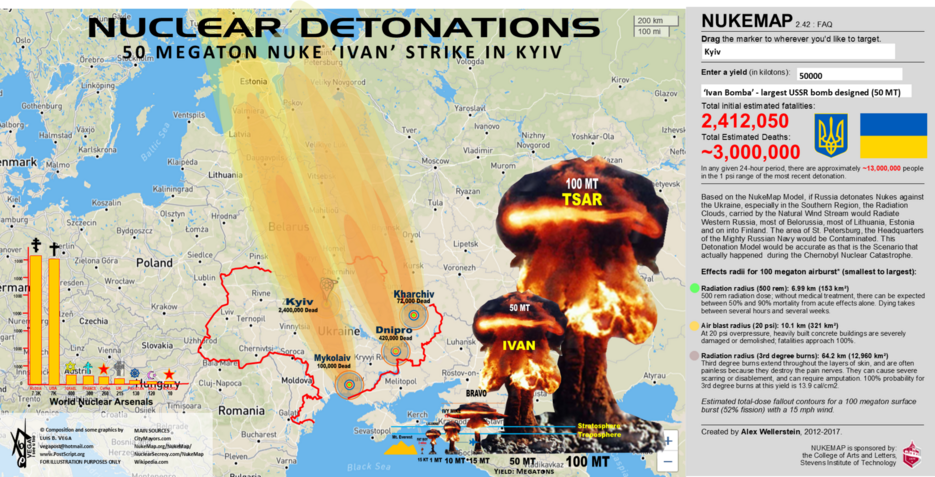 The purpose of this study is to present a Visual Effect of several Nuclear Detonation over Ukraine. The Model is based on a Free Software Model called NukeMap. From a Humanitarian Point of View, it will be a Catastrophe. It would be reminiscent of the Chernobyl Nuclear Plant meltdown in 1986. Not a good Idea. It will backfire or literally Blow-Back to not only Russia but Eastern and Northern Europe. The following is a Highly Recommended Video that dramatizes the events that led to the Disaster.

Based on the NukeMap Model, if Russia detonates Nukes against the Ukraine, especially in the Southern Region, the Radiation Clouds, carried by the Natural Wind Stream would Radiate Western Russia, most of Belorussia, most of Lithuania, Estonia and on into Finland. The area of St. Petersburg, the Headquarters of the Mighty Russian Navy would be Contaminated. This Detonation Model would be accurate as that is the Scenario that actually happened during the Chernobyl Nuclear Catastrophe.

Now if Russia will resort to Nuclear Detonations, that remains to be seen. Putin has mobilized the Mobile Nuclear Arsenal. And the Submarine carrying the ‘Death Star’ Nuke that can take out the entire East Coast of the USA is on the loose. Now that the 4 Break-Away Republics are assumed to be Russian Territory now by Putin, an Attack like what occurred in the attack of the Bridge to Crimea will have escalated the War to a whole new level.

And what is the U.S. President doing to mitigate this Conflict as the ‘Leader of the Free World’? Instead of being a Mediator, a Broker of Peace, he Fans the Fears that the ‘Risk of Nuclear Armageddon’ is ever closer. One finds it ironic that when President Trump was in Office, and not that one was and is a Supporter of Trump, it was Trump that brought World Peace. Although one agreed with many of the Decisions Trump made, one believed that he was Compromised.

The Political Left feared and shook in their Boots that Trump was a War Monger and was going to ‘Press the Nuke Button’. On the Contrary, Peace broke-out in the Middle East. He defended Americans by strategically taking-out Soleimani. He went to North Korea and was the 1stt President to cross over the Line. In one’s Opinion, he should have received the Nobel Peace Prize. The following are the Statistics of how many Innocent People will Die if just 4 Nukes are dropped on the Ukraine by Russia.
______________________

Radiation radius (500 rem): 6.99 km (153 km²)
500 Rem Radiation Dose; without Medical Treatment, there can be expected between 50% and 90% Mortality from acute effects alone. Dying takes between several Hours and several Weeks.

Radiation radius (3rd degree burns): 64.2 km (12,960 km²)
3rd Degree Burns extend throughout the Layers of Skin and are often painless because they destroy the Pain Nerves. They can cause Severe Scarring or Disablement and can require Amputation. 100% probability for 3rd Degree Burns at this yield is 13.9 Cal/Cm2.

Divine Detonations
Putin has put the West on Notice that a Nuclear Option is on the Table. The Russian Offensive has been dismal and an Embarrassment to the Pride of Putin. But in one’s Political Science Estimation, what is occurring presently is a Shift in the Balance of Power. The Military Hegemony of the USA is not being used to Foment Peace, but on the Contrary, War. The U.S. President plainly stated that he would take-out the Nord Stream Pipelines if Russian invaded the Ukraine. One finds it Hypocritical as that is what Russia said of the USA when it Invaded Iraq and Afghanistan as well.

Prophetically Speaking, will there be Nuclear Detonations to come, and can it be found in the Bible? Yes. Consider that when this same Power, the Russian Federation leads the Muslim Attack against Israel, it will be YHVH that directly once again, intervenes on behalf of protecting Israel. One believes that this event, the Gog-Magog Invasion of Israel will occur sometime during the 7-Year Tribulation Period of Daniel. Why? Consider the Details of how at that Time, Israel is ‘Protected’ by a Covenant having been made or ‘Strengthened’ with the Many.

Israel will be so deceived into thinking that it is guaranteed, Peace and Safety, by some certain Man-Figure, that they will assume he is their long-awaited Messiah. The Peace that will initially prevail in not only Israel but the whole World will be enough for Israel to tear-down its Security Wall. Now for this to happen, the Circumstances will need to demand an Event or Series of Events, so Catastrophic that a New World Order will have resulted from such an Occurrence. A Limited Nuclear Attack in the Ukraine? A Muslim Coordinated Attack on Israel over Energy and Ocean/Water Rights to the Natural Gas Fields?

In the Book of Zechariah 14, it states, starting from verse 11 that, ‘The People will live there, and never again will there be an Utter Destruction. So, Jerusalem will dwell Securely. And this will be the Plague with which the LORD strikes all the Peoples who have warred against Jerusalem: Their Flesh will rot while they Stand on their Feet, their Eyes will rot in their Sockets, and their Tongues will rot in their Mouths. On that Day a Great Panic from the LORD will come upon them, so that each will seize the Hand of another, and the Hand of one will rise against the other’.

The chapters in Ezekiel 38 and 39 explain the Rationale behind YHVH intervening directly to save Israel. He states that it is not because Israel is some wonderful Nation, or its People are Examples of Holiness. On the Contrary. It is to show the World that YHVH is the GOD of the Nations and executes Judgment. All but a 1/3 are allowed to remain alive to retreat and attest to what occurred on the Mountains of Israel, that being Judea and Samaria.

So, there is a Nuclear Detonation to occur for sure. It will be Detonated by YHVH and in Israel. This is for sure to happen, aside the horrors of Nuclear Winter that will come due to the Man-Made Nuclear Detonations that will also occur starting with the 2nd Seal of Judgment opened-up by Jesus after the Rapture. If Putin presses the Nuclear Button, all of Eastern Europe would be under a Radiation Cloud, all the way to Finland. It is reminiscent of the Chernobyl Nuclear Plant Disaster.

The region is just North of Kyiv and it is still a Wasteland to this Day. And note that the Name Chernobyl means Wormwood, as in the Star or Asteroid described in the Book for Revelation. This Star hits the Earth, melts-down and makes the Water and Rivers Bitter and Poisonous in that Region. Realize that there are 2 Asteroids. The other one is that Mountain Size one that hits an Ocean, etc. But such an Act of Russia Nuking the Ukraine could be the Outcry needed to bring about the Luciferian New World Order. It will be championed by a Man on the Scene, with ‘Trillions at his Disposal’. Will he be the one to Mandate 10 Regions or Kings on Earth to secure and ensure that no more Nuclear Detonations could occur? So, is a Nuke Apocalypse, possibly to occur in the Ukraine? If so, could be that ‘Sudden Destruction’ that will comprise the Rapture Scenario, whenever that takes place?
_____________________

Created by Alex Wellerstein, 2012-2022
NUKEMAP is sponsored by:
the College of Arts and Letters,
Stevens Institute of Technology
Related Articles

#355: TEL-MEGIDDO
BATTLE OF ARMAGEDDON
Staging Point of the Convergence for the Final War
https://www.postscripts.org/ps-news-355.html

#237: NUCLEAR DETONATIONS
THE COMING APOCALYPSE
A Study of a Nuclear Fall-Out Aftermath
https://www.postscripts.org/ps-news-237.html

#33: KOREAN PENINSULA CONFLICT
KINGS OF THE EAST
Prelude to the Battle of Armageddon
https://www.postscripts.org/ps-news-33.html