The purpose of this study is to strongly suggest that the Avebury Circles, to include the Silbury Hill and its immediate Open Field just Northwest of the small Hamlet of Beckhampton, is construed to match the ley-lines of Cydonia, Mars. With all the Mystery, Folklore and Magic surrounding Ancient Britain and its Legend of Merlin, King Arthur, one has not considered the direct connections with Mars. This study will only seek to contribute this Astro-Archeological aspect to the already plethora of amazing work done on this Ancient Site. Avebury Circles are laid-out in the same angle as that of the mysterious and majestic Glastonbury Tor or Tower. These Circles are approximately 14 Miles to Stonehenge and appear to Triangulate each other. Interestingly, this same Cydonian Martian Motif layout in Avebury is a near mirror image to the Glastonbury one.

How this study came to fruition is that in the continued study of the Cydonia Pyramids of Mars, one prior researched attributed part of the landscape to that of Avebury. When the Viking 1 pictures came back, although Low Resolution, much was discerned with the Low Resolution ones. Why? The Higher Resolution ones are highly Distorted and intentionally Blurred. Why? What do the Powers-That-Be and are in control of such Information have to hide or do not want the People to know? The issue would not be so much a direct challenge to the Judeo-Christian Narrative of Creation but that of the Evolutionists World View of where the Human Origins began.

It appears that the Ancient Civilizations of Britain, as with others around the World had Knowledge and Understanding of Advance Geometry, Mathematics, Cosmology and Theology, all wrapped-up into 1 Narrative that is consistent with the account of Genesis 6. The area to the right of the Cydonia, Mars Pyramid Complex at approximately 20 Miles appeared to match that of the Avebury Circles and Silbury Hill. Indeed, a transparent overlay of the Avebury Circles to that of the Martian Motif appear to match. Many would suggest an Anomaly and Effects made by Light-And-Shadows. But upon a Mathematical and Geometrical Analysis, Coefficients repeat and come-up without fail. One is the 19.47 Degree Inclinations of the mutual Sites. Is this an Anomaly also?

Specific to Avebury, the Cydonian Martian Motif it believed to correspond to the
section to the right of the Cydonia Pyramid Complex on Mars. It is about 20 Miles from the Face of Mars to the areas where the Avebury Circles and the smaller Silbury Hill correspond. Amazingly, the Heading is 19,470 Smoots. The Circumferences of each circle in Avebury are proportional to each, 500 Feet for Silbury Hill and 500 Yards for the larger Avebury one. The inner-circle is 365 Yards and suggests an Ancient Time Reckoning Observation of the Year and Time on Earth and perhaps as it was on Mars.

A Circle of Time
In fact, the Inclination Angle appears to be all the same in Britain with that of Stonehenge’s ‘Avenue’. This would make sense as the Latitude Britain is at would require such Angles to determine correctly, the advent of the Solstices and Equinoxes during the Year-Long Cycle of Time. For example, as already mentioned, the Inner-Circle of Avebury appears to track the Time of the Year. Perhaps each Pylon or Monolith signified a Stage of Time. Was is astonishing is that based on the massive size of the Cydonia, Mars Pyramid Complex, the surroundings Structures are far larger.

Where such ‘Beings’ who made the Mars Pyramid Buildings, a Race of Giants in comparison to ‘Earthlings’? Why such a need for the relative sizes? Do consider that on Earth, there is presently no such structure that can be made that large. The average size Pyramids of Mars range from 2-3 Miles at the base. The Face of Mars is just over 2500 Feet in length. Compared to the Aerium in Germany, it is a mere fraction, at just over 400 Yards. It would take about 6 Aeriums to reach the length of the Face of Mars. Following is the list of the Top-10 largest Human Structures ever made.

As to the nature of the Circles, consider that if indeed the entire site is modeled after the Cydonia, Mars one, the D&M Pentagon Pyramid would correspond to this site. Based on the relative size proportion, the Da Vinci Vitruvian Man would fit in this area. In other words, not only would the Vitruvian Man appear to be the ‘Measure’ of the Universe but also of ‘Time’, it would appear. It is also rather odd and interesting that if the said ‘Martians’ are believed to be either significantly taller, why would a nearly perfect Human Dimensional Body be used as one of their main Building Motifs? It is also rather unique that the 19.47 Degree Factor on Mars is based on the Longitude Line being true North.

Also, the Inclination Angle would be set onto the large Circle Area of Mars that corresponds to the Avebury Circles on Earth. This Angle would be based on the distance to the Spiral Mound type of Pyramid on Mars that is about 13 Miles to the South of Cydonia on Mars. Conversely, at Avebury, on Earth, the Angle of Inclination is mirrored precisely. The direction of True North would have the 19.47 Degree Angle bisecting the Fulcrum of the Hexagram that is configured with the Triangulation of the 3 Motif Factors, both on Mars and on Earth, etc. The 3 Structures that comprise this Hexagram triangulation are as follows. There is the famous Face of Mars. Then there is the Pleiades City with 7 Mai Pyramid Structures. Then there is the Girnt Pentagon.

This Martian Motif is replicated onto the Avebury with the Circles, the Silbury Hill and Open Field just Northwest of the Hamlet of Beckhampton. There is also an outlining configuration that borders the motif of the Pleiades ‘pan’ and ‘panhandle’. As to Silbury Hill, such a Structure is clearly Man-Made and the Question remains, why? And why there? It is, based on the Martian Motif Theory to complete such a Triangulation, Geometrically and in terms of Sacred Gematria, it is for a construct that is Meta-Physical in composition, that produces a Star Gate. Essentially such Earthen Mounds are the ‘Pyramids’ that are being facsimiled on Earth. Depending on the Latitude and Longitude on Earth, various renditions of the Martian Motif have a factor of either an Elongation, Constriction Size Proportion Difference. In most cases, the Martian Motif is flipped horizontally, 180 degrees and/or flipped vertically 45 to 90 Degrees.

It also appears that each site, as in Britain were part of a larger ‘Grid’ of Vertexes and Ley-Lines that serve as a ‘Celestial’ Power Grid of sorts. As it pertains to the ‘Initiated’ of Britain, the Druids, for example are one such Secret Society of ‘Priests’ that have been given this sort of Knowledge and Understanding. It is based on their Direct Contact with such ‘Beings’ from places like Mars, the Pleiades and Orion, etc. Although such Entities pose as ‘Alien Saviors’ or Benevolent Beings trying to ‘help’ Humanity, they are disguised Fallen Angels. If the Narrative of theirs is that they have been the ones who have helped Humanity in the past and have orchestrated the major events dealing with the subjection and enslavement of the masses through their economic, political, military and religions orders, then such are the type that the Bible has warned about.

Such are the ‘Masquerading Ministers of Righteousness’ that only seek the ‘Great Work’ of their Ala-Lu ‘Rebel King’ that is said to rightfully return and rule Earth as he had at one time did. This is not to say that those people living in Beckhampton or Avebury are Accomplices and complacent about this Mars Connection, but perhaps some are. As such Beings currently have Dominion over the Earth, they have put in place the Ruling Families with certain Bloodlines in Control. They are appointed to orchestrate their Global Events to help bring about their Fallen ‘King’ of theirs. Eventually, this ‘King’ will be unmasked and the whole World will eventually see who it really is, Lucifer. Presently, although the World and its system are run by the Luciferians, the Existence and Power of the Church has been and is what is retraining such Evil Forces outright.

The Bible clearly teaches that there is a current struggle on Earth, as it is in Heaven of who will win the Souls of Humanity. There are the Sons of Light and the Sons of Darkness that in the meanwhile have, are and will take sides and are working for their respectful ‘King’. Hanging in the Balance is Immortality, Eternal Life with Power and Dominion, not only on Earth but in Heaven itself. However, this disposition has already been obtained and secured by Jesus Christ. He became a Human and Died as the Substitutionary Sin-Offering to redeem Adam’s Fallen Race. The plan of YHVH has been that Humanity is to be the ‘Consort’ of the Son of GOD to rule all that is and/or will be. Until that time, the Rebel Fallen Angels and their King, Lucifer continue to only seek the Destruction of Humanity and Earth that at one Time had and has the remnants of these Star Gates configured at their Sacred Sites.
___________________________ 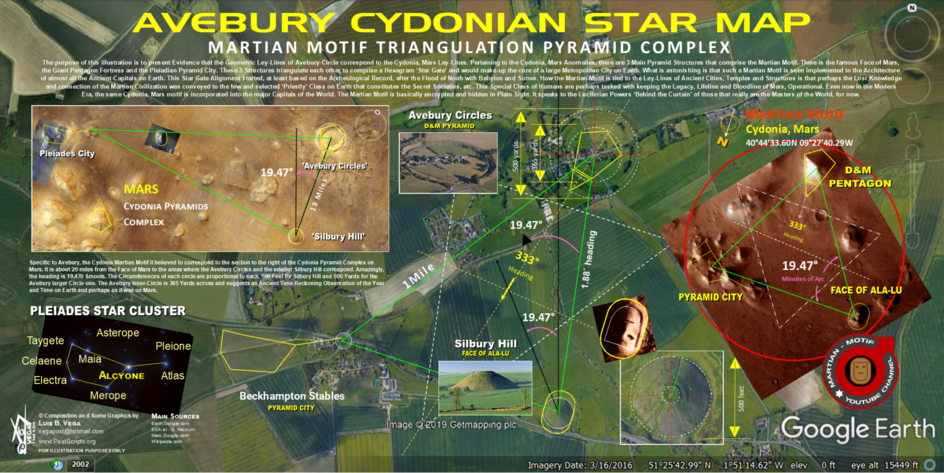