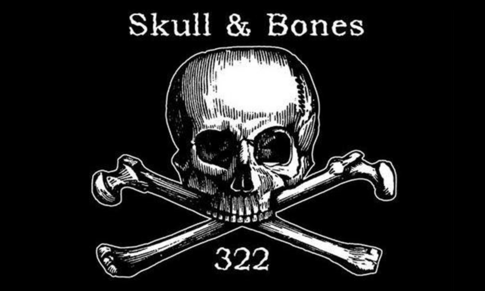 'Jesus answered him, I have spoken openly to the world. I have always taught in Synagogues and in the Temple, where all Jews come together. I have said nothing in secret.' -John 18:20

The purpose of this study is to present some of the generic but then more profound meanings attributed to the 322 number. If one does superficially research, one will find out that it is true, it is associated with the Skull and Bones Society. They have a Temple called the ‘Tomb’ at the campus of Yale. Students get ‘tapped’ on the shoulder to even be considered to join the Secret Society. One Reporter in the early 2000s sneaked in and taped their Satanic Ceremonies. During initiation rites, overseeing Attendants dress up as a Devil, another as a Pope and other characters. Apparently, it is true that they have the Initiates lie in coffins, naked and must confess all their deepest longings, perversions, kinks and lusts so as to blackmail them later when they get placed into positions of power.

The Reporter posted the video to YouTube. He was later found dead. Those within its order usually will be groomed to be placed in top corporate, government, education and military institutions. They are the 1% of the 1% that make up the ‘Deep State’ or the Invisible Hand that run every Nation on Earth. The Secret Society is Luciferian at its core as that who their ‘Master’ is and who gives them power according to Albert Pike. There is a good movie that came out in 2006 called, ‘The Good Shepherd’. It barely scratches the surface about it Secret Fraternal Order and their rituals. And it is ‘sanitized’ to show only their interpretation and version of what those on the outside should be allowed to be shown and known, etc. This Secret Society is considered an arm of Freemasonry.

One of their main motifs is the Baphomet. It is also known as the Goat of Mendez and came from Eliphas Levi. It is but 1 of the many underlying illustrations of what they venerate. The Luciferians assert that the ’One’ and True ‘God’ - is Lucifer according to Pike. Albert Pike in Morals and Dogmas, p.821 stated plainly that Lucifer is the source of light, not Jesus Christ. To them, Lucifer is the ‘Master of the Universe’, the Light Bearer, Eye of Horus, the Shining One, Osiris, etc. His devotees ascribe to him true ‘Name’ as YHVH backwards. To some, he is a ‘good’ Force but that may be used for evil. This is the concept of the Star Wars ‘Force’ and Jedi Order that was to bring ‘Balance’. For example,, the very monogram of the wording for ’Allah’ in Arabic seems to appear to be somewhat in the same configuration of the idol of Baphomet. Now as to the 3-2-2 numerical inferences, here are some but not all for sure, as there are more inferences that are not known on this side of the divide or esoteric veil.

322: Meanings
1. 3 = C, 22 = V in the Western Alphabet. This is where for example there is now a correlation to the C-orona V-irus that suggests who, in part are behind this worldwide plandemic plot.

2. The White House on a map has C-onnecticut and V-ermont streets that meet as part of the Pentagram overlaying it. It is well known that the street grid of D.C., is Luciferian.

3. It also stands for March 22nd. This is when astrologically the time of Mars starts, so considered the ‘Ides of March’. It is when ‘Kings went out to war’ as it says many times in the Bible. Thus, as an association with a war/conflict campaign, assault and dominance, initiatives are made. etc. For example, the W.H.O. declared the COVID-19 a ‘Pandemic’ on 3-11. Add 11 or a ‘mirror’ of it, ‘As Above, So Below’ axiom and you get 3-22. Interestingly also, 3-11-21 is exactly 360 days to the 1260th day ‘Shelf Life’ of the Revelation 12 Sign. So something occurs(ed) on this day that will further their diabolical plans to enslave the world further.

4, March 22 is also when the Spring Equinox occurs, depending on the year. Think of ‘balance’ and the Ying-Yang esoteric nature of their Luciferian Religion and how they encoded this precept even within the Georgia Guidestones, ‘…Keep everything in Balance’…

5. Scripturally, Genesis 3:22 is when YHVH warned of not allowing Humanity to access the Tree of Eternal Life in a fallen state or they would become Immortal but in a fallen state of perpetual sin never to be able to be redeemed. Humanity would essentially become like the Fallen Angels. GOD did Humanity a favor until the Garden of Eden could be restored by Jesus and the door to Eternal Life was, in a sense opened at or by another ‘tree’, Calvary, the Cross or the tree on which Jesus was nailed to. Which is then how 322 and the Skull and Bones relate to Calvary.

6.  Calvary is Latin for the Skull. The Luciferians mock the death of Jesus on the Cross of Calvary in their rituals because they seek to become Immortal by following the false lie of Lucifer instead of through Jesus. They worship ‘Death’.

7. Luciferians celebrate this as being the actual time Jesus died on the Cross, at 3:22 pm on that Wednesday in Nisan 14 or April 14, 32 AD. Jesus was on the Cross of Calvary from 9am to 3pm and corresponded to when the Morning and Evening Lamb Sacrifices were offered.

8. This number is also often used as a code of who is running the show and how certain edicts, laws, monument or centers are dedicated on this date. For example, the Denver ‘New World Airport’ has its Freemasonic Corner Stone laid on March 22 as well as the Georgia Guide Stones.

9. 3x33 = 66 and in the Kabbala, number 66 is the numerical value of the Wheel from the Hebrew ‘Gal-gal’. Interestingly, it is phonetically very similar to the word ‘Goo-gle’; inferring to cast a whirlwind of ‘Chaos’. It might be a stretch here, but I doubt it. The meaning of Gal, Gul or Gull, is to trick or to cheat. So, think about that next time you ‘Google’ something online. And realize who is behind Google from the very beginning. The project first started as a DARPA-CIA-Stanford initiative to fine-tune algorithms for the internet. Now, Google is essential 1984’s Big Brother that has enticed the masses, hooked them like a free sample of cocaine given to youth by Pimps and now are controlled in terms of what information is allowed or not worldwide.

Baphomet
From research, Skull and Bones has its origins in the old Bavarian Cult of Death and Destruction of the Illuminati. It has been well documented that Secret Societies funnel top-ranking candidates into all forms of entities that control world governments, corporations, military, educational institutions and the like. In turn, key positions are allotted to individuals that seek not the civil liberty or welfare of the common citizen. The sole aim is to promote their Luciferian Agenda to have it permeate down to any and all facets of Humanity for its enslavement and eventual mass extermination. Their code is masked by numerology hidden in plain sight. One example below as an illustrated chart depict the annual group/class picture. They cryptically use posture and position that correlate to numbers unrecognizable to the average eye; the pentagram, 6-6-6, 72, 5-5-5 etc. The following are some attributes of the depiction of their Beast.

-Hermaphrodite Male-Female
-Fallen Angel
-Cast out of Heaven
-Caduceus of Mercury
-Sexual Power-Drive
-Debased beastly nature of lust desire
-Union of Opposites
-‘As above, So Below’
-Horns as of a ‘Baphomet’
-Chronos aka Saturn
-All Seeing Eye- Lucifer
-Left ‘Eye of Horus’

At the center of Masonic Blue Lodges, there is always the 5 Pointed Pentagram. It is said to represent the Blazing Star Sirius—which in the occult is synonymous with Lucifer or Satan. Jesus Christ described these places of their gatherings or Lodges in modern times as Synagogues of Satan. It is also known to represent the 5 Chambers of Hell or the Abyss where the Fallen Angels that rebelled against YHVH were sentence to, judged for interfering with the genome of mankind. This is however repeating now with the COVID-19 shots that are not a vaccine but an attempt to manipulate the DNA of a person. It is presently being set for the grid that will need to be in place so when the Mark of the Beast rolls around, they can just ‘flip the switch’.

Others will and do ascribe an ‘Ancient Alien’ connection in that according the ‘Angelic’ being, they ‘left their first station’ and came down to Earth to ‘improve and save’ Humanity from itself. This is corroborated in such literature as the book of Enoch in which Angels descended on Mount Hermon. The skull is a mockery of Mount Calvary where Jesus Christ died and paid for the sins of Humanity. For a more in depth research, consider the works of Fritz Springmeier. He is the one that wrote the famous book, Bloodlines of the Illuminate. It was way ahead of its time. He named names and exposed the Ruling Families that are in league with Lucifer to bring about his version of the Garden on Earth and remake or re-create Humanity into his, ‘Image and Likeness’. They will have almost succeeded if I was not for Jesus who said, ‘I have come to destroy the works of the Devil.’

The book by Springmeier was the first comprehensive book on the subject, but he got put in prison for it. There are many other authors that have corroborated the accounts of these bloodline families. Why ‘bloodline? It is because it has to do with Genesis 3:15. It is about the War of the Seeds and who gets the prize, Humanity and Earth in the end.
__________________________ 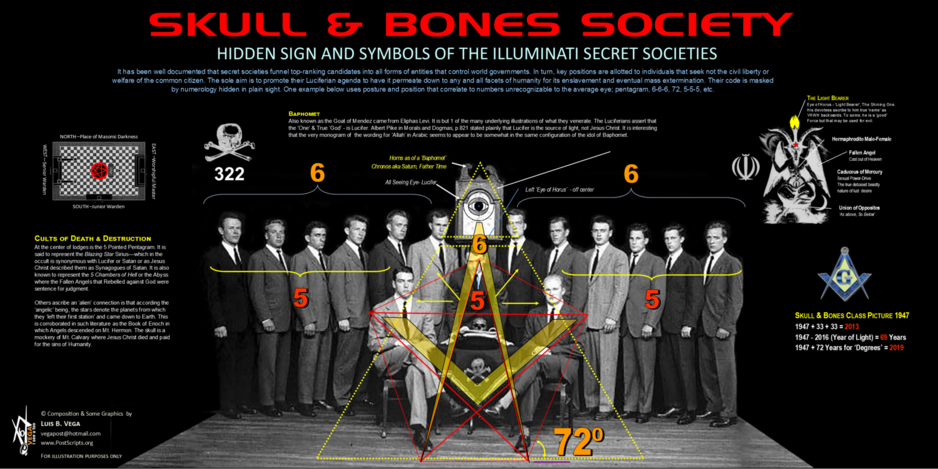