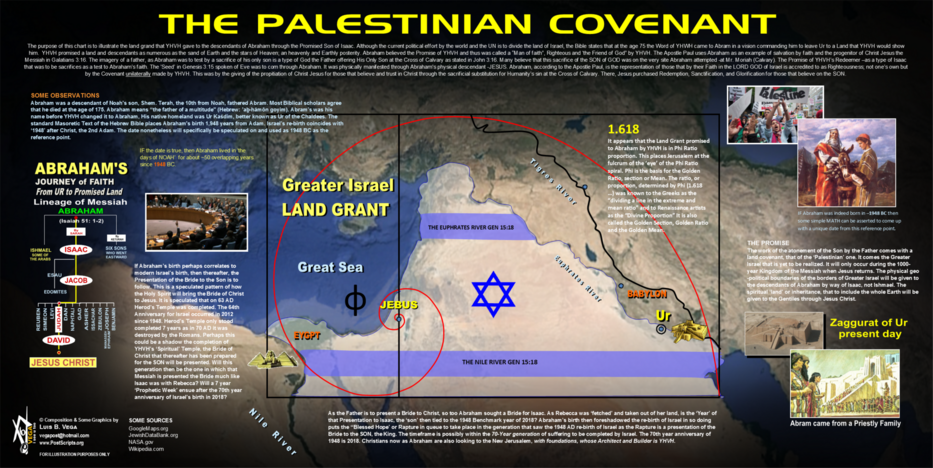 #134:
​ABRAHAM'S JOURNEY OF FAITH
PRESENTATION OF THE BRIDE
Birthdate Related to Israel's Rebirth and Holy Land

'By faith Abraham, when he was called, obeyed by going out to a place which he was to receive for an inheritance; and he went out, not knowing where he was going. By faith he lived as an alien in the land of promise, as in a foreign land, dwelling in tents with Isaac and Jacob, fellow heirs of the same promise...' - Hebrews 11: 8-9

The purpose of this study is to ascertain a possible divine pattern that involves a prophetic timeframe correlating the possible birth of Abraham with the 'Conception' of the state of Israel in 1947. In turns of a possible correlation, such a blueprint of Divine Glory could have some implications of when the Bride of Christ is to be presented symbolically to the Son, as Abraham secured a Bride for Isaac. The Bible states that at the age of Abraham was 75, the Word of YHVH came to Abram in a vision commanding him to leave Haran. It is much like he was called out from and land of Ur to a land YHVH would show him. YHVH promised a land and city that GOD Himself would build; this became known as Israel later on. Also, YHVH promised that his descendants would be as numerous as the sand of the Earth and the stars of Heaven. This alluded to both an Earthly posterity and a Heavenly or spiritual one as well.

The Bible states that Abraham believed YHVH and thus was called a 'Friend of YHVH' and the godly standard for a 'man of faith'. This is one of the central messages of the Bible. The Apostle Paul uses Abraham as an example of salvation by faith and not works and the progenitor of Christ Jesus as the one and only true Messiah of Israel as taught in Galatians 3:16. The Apostle Paul presents the prophetic imagery and example of the blueprint of GOD's Glory as seen in Abram and Isaac. The redemptive theme is that of a father, as Abram, that was to be tested of his faith in YHVH's promises by a decree to sacrifice his only son as a type of what Christ would do. This would foreshadow GOD the Father offering His only SON at the Cross of Calvary as stated in John 3:16. Many believe that the completed sacrifice of Jesus on the Cross was at Mt. Moriah, that is Calvary as an extension. It was on the very site Abraham obeyed and proceeded to do such a prescribed act with Isaac by YHVH as a test of Abram's faith.

Although many argue that how could 'GOD' tell someone to prefer a human sacrifice, suffice to say that Abram's faith at this point in his Journey of Faith was enough to believe that if 'GOD' wanted Isaac died, yet promised that through Isaac the Redeemer would come, then 'GOD' had to somehow resurrect him back. In typology, that is actually what happened, the execution was not stayed. Abram received back Isaac as if from the Dead as YHVH completed the act by placing a substitution, His very Only Begotten of the Father, Jesus Christ. It was Jesus Christ that was the promise of YHVH's Redeemer given in 3:15 to Eve in the Garden of Eden and then to Abraham was physically manifested through Abraham's physical descendant, Jesus. It was Jesus who willfully and lovingly obeyed the Father because He knew of the resurrection power and end of the Plan of Redemption.

New Covenant
Abraham was a descendant of Noah's son Shem. The Bible discloses that Terah was the 10th form Noah that fathered Abram Most Biblical scholars agree that he died at the age of 175. Abraham means 'the Father of multitudes' as in nations (Hebrew: 'Ab-hamon goyim). Abram was his name before YHVH changed it to Abraham His native homeland was Ur Kashim, better known as Ur of the Chaldeans. The standard Masoretic Text of the Hebrew Bible places Abram's birth at 1,948 years from Adam. Israel's rebirth coincides with the year 1948 after Jesus Christ, the 2nd Adam. Although this date is in dispute, for the purposes of this study, the speculated date of Abram's birthday will be assumed to be 1948 BC as a reference point. If the date correlation theory is valid or true, then Abraham lived in the days of Noah for about ~50 overlapping years since 1948 BC.

Many believe that this current generation is now also living as 'in the Days of Noah'. Abraham according to the Apostle Paul is the representation of those that by faith in Jesus Christ, the King of Israel is accredited complete and unconditional Righteousness before YHVH. This right standing before YHVH is not based on one's own righteousness or able to be attained by one's observing the Law and the Prophets, good works or racial lineage. This is a Righteousness that comes apart from the Law. This is the core message of the New Testament. This other Righteousness is the New Covenant initiated by Messiah at His 1st coming and is only found in Jesus Christ that imparts and imputes such a standing. This standing succeeds the Torah not in that it does away with it but completes it and bestows more than on top of it. This is what Jesus always exclaimed that He did not come to do away with the Law and Prophets but to fulfill them.

As noted, this other Righteousness is the New Covenant solely by YHVH unilaterally. This was by the giving of the propitiation of Christ Jesus for those that believe and trust in Christ Jesus through the sacrificial substitution of Humanity's sin at the Cross There, Jesus purchased Redemption of Humanity as a type of Isaac, the willing son. What Jesus came to do, and give was far more beyond what the Law and the Prophets could not. Jesus not only secured Redemption, as in paying a price to purchase back Adam and Eve's fallen race, but Jesus bought and paid for the Sanctification, and Glorification of Humanity. This was initiated only by Jesus and completed in Jesus the Messiah of Israel. This substitution gave a new destiny to Humanity, it changed its course that was sentenced to the 2nd Death. This is a state of eternal separation from the Life of YHVH. This new destiny is now only able to be accredited to those that are the Followers of Jesus Christ.

If Abraham's birth perhaps correlates to modern Israel's birthdate, then thereafter the 'Presentation of the Bride' to the Son is to follow. This is a speculated prophetic pattern of how the Holy Spirit will bring the Bride of Christ to Jesus at the point of the Resurrection and the Rapture. Prophetically, the Father is to present the Bride to Christ, as Abraham sought a bride for his 1st Born of Promise, Isaac. As Rebekah was 'fetched' and taken from out of her land, this study suggests that the year could correlate spiritually and even astronomically with the Presentation of the Bride of Christ. This prophetic synchronization could also be tied to the 1948 benchmark year that Israel was born and how old Isaac was when the Bride Rebekah came to him. The culmination of such timelines could then focus on the 3rd Temple in Jerusalem. It is speculated that in 63 AD, Herod's Temple was completed. Herod's Temple, in actuality Zerubbabel’s was a grand refurbishment to appease the Jews by Herod. Herod saw himself as the King of the Jews.

Visitation of YHVH
The 2nd Temple refurbishments only lasted 7 years as in 70 AD the Temple was destroyed by the Romans and the Jews were driven to the 4 corners of the world, to the goyim. Ironically it would be to the multitudes that the Jews despised, as if they were to go to the places from where Abraham started and the Jews came from, the proverbial 'starting over from square one'. Perhaps this divine pattern could be a shadow of the completion of YHVH's spiritual Temple, the Bride of Christ that the Father has been building for Christ using live bricks assembled by the world of the Holy Spirit.

Once this Bride or 'Temple' is completed, it will be filled by the Divine Glory of YHVH. These were the divine blueprints of the prior Tabernacle and Temples of YHVH throughout Israel's history. Thereafter this completed Bride will be presented to the SON. This will be at the time of the Resurrection and Rapture of the Bride of Christ. When the 3 Visitors came to encounter Abram in the Plains of Mamre, the Bible account alludes to them being the representation of the Trinity.

The Spokesperson referred to Himself as seen the future and issuing decrees of blessing Abram but cursing for the cities of Sodom and the surrounding cities because of their sodomy which is against the original blueprint of GOD's Glory for Humanity. In the Old Testament, such apparitions of 'GOD' are called a Theophany. Such apparitions in the New Testament, especially like when the Apostle Paul saw Christ, it is called a Christophany. The following are some speculated mathematical relationships ascribed to Abraham's journey of Faith pegged to his speculated birthday.

Count is based on a 360 day year Hebrew calendar.

The Bride of Christ ‘Spiritually’ are told to Leave Haram ‘Earth’ and enter the Promised Land. Heaven with Jesus, i.e., the Rapture event, etc.

Spiritual Temple
If Abraham was indeed born in ~1948 BC, then one can assert some simple mathematical calculations to come up with a unique date association from the reference point. Then interjecting the 2 prophetic times for judgment and suffering to be completed at the Presentation of the Bride, this study is alluding that it could be thus related to the year 2015 that the Bride of Christ will be present to Jesus Christ. This means that the Spiritual Temple will be completed shortly. This could also correlate in how the 3rd Temple in Jerusalem will be then built for the AntiChrist's Covenant that will parallel Jesus's Covenant with the Bride.

It will be at this time that Israel 'marries' the false AntiChrist to conclude the 70th prophetic week of years from the Book of Daniel. Thus, this pattern foreshadowing the rebirth of Israel in so doing puts the 'Blessed Hope' or the Rapture in queue to take place within this 'Last Terminal Generation' per Psalm 150. This is the generation that witnessed the rebirth of Israel as a sovereign nation in 1948. Perhaps this was the initiation and countdown to the Presentation of the Bride for the SON and the completion of the Temple, spiritually as far as the Church's mission and purpose is concerned.

The timeframe is possibly within the 70 year generation of suffering to be completed by Israel according to the insights of Daniel. This 70 year prophetic blueprint of GOD's Glory echoes the 70 year of Babylonian captivity and the year in which the 2nd Temple was destroyed in 70 AD. Christians now as Abraham are also looking for the New Jerusalem in which its foundations are built by the Great Architect of the Universe, the Master Builder that is none other than Jesus, the Messiah of Israel.
____________________________