#181:
​GIZA MARTIAN GODS
PLEIADES PATTERN OF THE PYRAMIDS
The Location of Osiris' Tomb

The purpose of this study is to illustration that the Giza Pyramid complex of Egypt on Earth not only incorporates the Belt of Orion Star constellation corresponding to the 3 main pyramids but that the pyramid complex also has an encrypted pattern of the Pleiades in similar parallel proportion. The Giza Pyramids also have the Mars Motif of the triangulated complex of Cydonia. The key to linking both pyramid complexes is the pentagon that is at the core the 7-Pyramid ‘Pleiadian’ City. There is a 1 for 1 match in orientation. Amazing this Pleiades pattern on Mars also approximates the angles and proportion on Earth. The illustration will show the 2 pyramid cities and the corresponding ley-lines for a visual match.

Not surprisingly the Giza Pyramid complex just outside Cairo that is corresponding to the Cydonia, Mars pyramid complex has the root word with connotations to Mars. It is understood that at the time of the founding of the city of Cairo, the rising of Mars was taking place. Some unique observations about the mutual correspondence involving the Pleiades Star Cluster and Orion constellation are as follows. The approximate matching of the 2 pyramid complexes occurs as the Giza composition is inverted horizontally and flipped at a 90-degree angle. Normally the Great Pyramid is aligned to true north. This is exactly how the Pyramid City of Cydonia, Mars is also aligned to true north on Mars. Subsequently the composition of the Giza Pyramids has a ‘crisscross’ double arrangement of this amazing array of mathematics.

The Orion double orientations have the entire Orion constellation outline pegged to certain spots over the Giza region. In the Orion orientation facing west, the reverse motif has the Celestial Equator parallel that of the Nile River. In the 2nd orientation that doe match the Orion Belt Stars with the 3 pyramids, the depiction facing south has the Celestial Equator ‘cross’ the Nile River. This ‘cross’ concept is center to Orion in that it is the celestial rendition of the ‘Crucified One’ that the storyline of the Stars, the Mazzaroth is depicting with Orion as the ‘Star’ in this ‘Celestial Gospel’. Ultimately, the fulfillment is found in the work of Jesus Christ on the Cross. It is he, Jesus, not the counterfeit Masonic Ala-Lu or Osiris in this case that is the fulfiller of such work done on the Cross of Calvary. Why? Jesus died on the Cross of Calvary to redeem the lost souls of all of Humanity, that is effective to all those that apply such a payment, etc.

The Immortal Ones
As noted, unapparent to the casual observer, the ley-lines of the complex are pegged to form a pentagram at the core of the 3 pyramids based on this Sacred Gematria and astronomical composition. When matched from the various corners of the Pyramids and with the Sphinx, at each node or land mark of this geometric pentagon, there are key buildings. The most prominent one is the Sphinx that is next to the Osireion, which is the Temple dedicated to Osiris but in actuality it is a vailed Orion. The Sphinx has a double meaning also. It is the fusion of the Mazzaroth, starting with Virgo and ending with Leo. It is also a correlation of Orion’s phallus. The Giza Martian Motif is the most well-known of those found in the most ancient of places in other parts of the world like in the ruins in Peru and Baalbek.

As noted, the 7-Pyramid City structure of Cydonia match the 7 Stars of the Pleiades and corresponds to the various ley-lines, corners of the Pyramids of Giza and the Sphinx among other land markers in the pyramid complex. When the Great Pyramid outline of Giza is superimposed onto the Cydonia, Mars pyramid complex, there is a 1 for 1 match that is astonishing. Evidently the builders of the Pyramids of Giza and Egypt had the same knowledge of surveying ley-lines not only on Earth but those in Cydonia, Mars as well. Were they one in the same peoples perhaps? Who are the builders of these pyramids in Mars and even in other satellites such as the Moon as some purpose to exist? There is picture evidence brought back by some astronauts and by satellite pictures taken of the surface of ‘pyramids’ found on parts of Mars.

Also, several pictures captured by the Rovers in Mars have taken pictures of apparent pyramids that seem to be beyond ‘anomalies’. Some believe that the peoples that lived in the pre-Flood world of Noah had a great capacity for such knowledge, technology, and space travel and perhaps even had colonized parts of the Moon, Mars and beyond. Or, is it the other way around? According to the Bible and the book of Enoch for example, the Fallen Angels were very active ‘travel’ to Earth and altering the human DNA along with other species. Others speculate that this ancient and lost building technology was of the Atlantean type whose continent sank in a catechism that could have been caused by the Flood of Noah or a far earlier galactic war perhaps.

It was from that time forth that Humanity had to relearn everything anew, yet only the few elite priestly classes have hoarded such secrets. It is the case now with the so-called ‘Secret Societies’ that are said to hold these lost secrets of the Universe. Such knowledge is now ‘codified’ and hinted at in the modern renditions of such Sacred Geometry found incorporated in the layouts of modern centers of power. It could have been the case that with the assistance of such highly and spiritually intelligent ‘Beings’, some forbidden knowledge was conveyed and taught to mankind as Enoch attests to was occurring. It could also be the case that at some point in time, either during the pre-Flood stages on Earth or before Genesis 1:1, there were stations of Angelic ‘Sentinels’ commissioned throughout the Universe. The theme of the Book of Enoch does stipulate that the ‘Watchers’ sent by YHVH to ‘Guard’ over and ‘Help’ Humanity, ‘left their 1st Estate’ to mate with human woman.

Chambers of Immortality
This is the band of 200 Angels that came down during the days of Enoch at Mount Hermon. Is any wonder that the Face of Mars was situated as part of the complex and in precise geometric and mathematical ley-lines and association to the pentagram of the Pyramid City of the Pleiades on Cydonia, Mars? This motif is thus also replicated in the geometry seen in the Giza Pyramids. This same pentagram geometric configuration corresponds precisely to the Tomb of Osiris. It is in-between the middle pyramid and the Sphinx just off to the side of the causeway. Not until recently was the water well that was thought to be just that was thoroughly excavated and the water pumped out. What has immerged is a wonder of chambers and 8 sarcophagi. In the lowest chamber was the sarcophagus surrounded by a mote and 4 pillars.

This exact location corresponded to the same exact center of the pentagram motif of the Pleiades Pyramid City on Cydonia, Mars. What is also very interesting is that the covering slabs of the sarcophagus has an inclined angle border and is reminiscent of the Face of Mars mount that looking from a top view resembles the covering slab with its border. Perhaps the wreckage of many planets, like what is found in Mars, as seen by the evidence of surface bombardments across the Solar System speaks of this Luciferian Angelic War that scared the planet Mars for example. Since the Flood of Noah, these same Fallen Angel entities have been waiting for Humanity to catch up to the technology, so they can pick up where they left off, sort of speak.

It has only been in the last few decades that the technological sophistication now exists to do what was done as in the Days of Noah. The prominent characteristic of the Days of Noah was Transhumanism. The Fallen Angels sought to cross the species of all living things and with mankind. Such sought and still seek to unlock the secrets of YHVH’s DNA within creation and mankind especially since it is the only portion of Creation that was designed and made in the ‘image and likeness’ of the Creator Himself. No other living species or kinds can claim this. This concept is even seen in Sacred Geometry. For example, the pentagram is the only geometric motif that can reproduced itself, endlessly. This construct signifies resurrection and immortality.

One very interesting connection with immortality has to do with where Osiris is purported to be buried, within a ‘pentagram’ geometric configuration at the heart of the Giza pyramid complex. Osiris is associated then with Ala-lu that was banished from Earth to Mars and later on died. His countenance was memorialized in a ‘face-mausoleum’ that is what is commonly referred now as the Face of Mars. Perhaps this cadre of fellow Fallen Angels wanted to resurrect him and thus embarked on this never-ending quest for the ‘magic code’ or formula to do this. It is rather interesting that as the ley-lines of the Pleiades Pyramid City of Cydonia match the Giza Pyramids, a pentagram is construed with the sacred Gematria also at both complexes apparently. Thus, the pentagram represents the innate ability to reproduced itself or ‘resurrect’ itself over and over, in achieving resurrection and obtaining ‘immortality’.
_____________________ 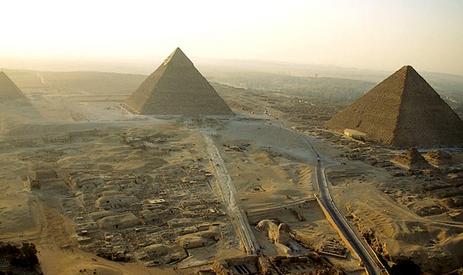