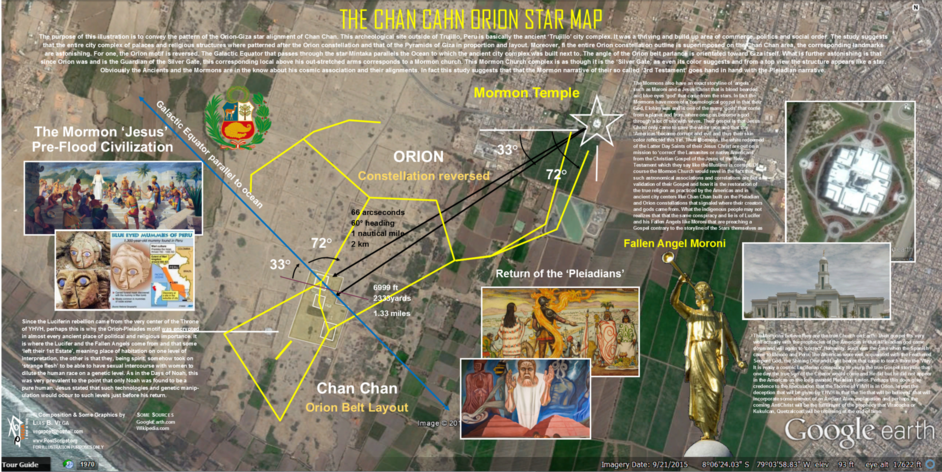 The purpose of this study is to suggest that the ancient Chan Chan city complex of Peru is patterned after the Orion constellation and in turn to the Pyramids of Giza. Chan Chan was an ancient thriving metropolis just outside of Trujillo, Peru. This is one of many surrounding sites that include the Pyramid of the Dragon, the Sun, and the Moon. The Chan Chan alignments are configured on the cosmic alignments that are not from this Earth. It appears that the whole hemisphere pegged their various centers of power off Orion and the Pleiades, just as today. It would appear that the same narrative was propagated at the same time and from the same source. The key personage in common was Viracocha. He was said to have come from the Orion and Pleiades stars being blue-eyed and blond bearded. He was considered the Teacher, Priest, Peacemaker and ultimately was crucified on a cross. He promised to return at the end of the Age to save once again Humanity on the brink of chaos and extension.

This narrative echo the events of the Fallen Angels during the time of Enoch that rebelled against YHVH and left their celestial posts to intermingle genetically with Humanity, specifically women. The Orion and Giza correlation shown below appears to be in approximate pattern with the Orion and Giza Pyramid layout in reversed order. Such art and architecture were taught to humanity and is one possible explanation for a common knowledge sources that spans oceans or even before the Flood of Noah and is believed to have seeded the human race from genetic engineering. Below is the Temple of the Rainbow. Viracocha was said to have gone on flying serpent machines and would come back in one. This obviously has a UFO flying saucer inference that could very well play into the whole Ancient Alien theory that the ’Pleiadians’ are in fact the ’creators’. Perhaps the Chan Chan Orion city complexes had this construct in their architecture.

The Bible does corroborate this to an extent in that it was the Fallen Angels that sought and still do to ’perfect’ a human race genetically after their own likeness and image.  Such entities were considered the ‘gods’ and the worship of them devolved into a bloody religious system of human sacrificial rites. It is one reason why many believe YHVH judged the whole hemisphere with the European invasion and colonization of the Americas. This archeological site outside of Trujillo, Peru is basically the ancient ‘Trujillo’ city complex. It was a thriving and build up area of commerce, politics, and social order. The study suggests that the entire city complex of palaces and religious structures where patterned after the Orion constellation and that of the Pyramids of Giza in proportion and layout. Moreover, if the entire Orion constellation outline is superimposed on the Chan Chan area, the corresponding landmarks are astonishing. For one, the Orion motif is reversed.

The Orion Religion
The Galactic Equator that passes through the star Mintaka parallels the Ocean to which the ancient city complex was built next to. The angle of the Orion belt palace is orientated toward Giza itself. Further astonishing is that since Orion was and is the Guardian of the Silver Gate, this corresponding local above his out-stretched arms corresponds to a Mormon church. This Mormon Church complex is as though it is the ‘Silver Gate’ as even its color suggests and from a top view the structure appears like a star. Obviously, the Ancients and the Mormons are in the know about his cosmic association and their alignments. In fact, this study suggests that that the Mormon narrative of their so called ‘3rd Testament’ goes hand in hand with the Pleiadian narrative and conspiracy of the Pleiades. The following are some of the measurements associated with the Orion motif over the Chan Chan palaces.

The Mormons also have an exact storyline of ‘angles’ such as Maroni and a Jesus Christ that is blond bearded and blue eyed ‘god’ that came from the stars. In fact, the Mormons have more of a cosmological gospel in that their god, ‘Elohim’ was and is one of the many ‘gods’ that come from a planet and from where one can become a god through a lot of sex with many wives. Their ‘gospel’ is that Jesus Christ only came to save the white race and that the ‘Americas’ became corrupt and evil and thus their skin color darkening reflected this sin.

Thus Mormons, the white redeemed of the Latter Day Saints of their Jesus Christ are out on a mission to ‘correct’ the Lamanites or Native Americans from the Christian Gospel of the Jesus of the New Testament which they say like the Muslims is corrupt. Of course the Mormon Church would revel in the fact that such astronomical associations and correlations are but a validation of their Gospel and how it is the restoration of the true religion as practiced by those Mormons in North America and in the Americas and in ancient city centers like Chan Chan built on the Pleiadian and Orion constellations that signaled where their creators and gods came from.

What the indigenous people may not realize that the same conspiracy and lie is of Lucifer and his Fallen Angels like Moroni that are preaching a Gospel contrary to the storyline of the Stars of the true Mazzaroth themselves as suggested by the Apostle Paul in the book of Romans. The Mormons believe they are the true Church on Earth. Their gospel fits very well actually with the prophecies of the Americas in that a Pleiadian god came down and will again to ‘correct’ Humanity. Such was the case when the Spanish came to Mexico and Peru. The Americas were well acquainted with the Feathered Serpent God, the Shining One and Light bearer that came to teach them the ‘Way’ of the Cross.

It is really a cosmic Luciferian conspiracy to usurp the true Gospel storyline that one day the true Son of the Creator would come and He did, but He did not appear in the Americas as the long awaited Pleiadian savior. Perhaps this does give credence to the speculation that the Thorne of YHVH is in Orion and somehow connected to the Pleiades. In part the deception that will be given by YHVH in that the ‘lie that will be believed’ that will incorporate some element of an Ancient Alien explanation and perhaps the coming AntiChrist will be the fulfillment of the prophecy that Viracocha or Kukulcan, Quetzalcoatl will be returning at the end of time. The following are some approximate measurements based on GoogleEarth coordinates.

Since the Luciferian rebellion came from the very center of the Throne of YHVH, perhaps this is why the Orion-Pleiades motif was encrypted in almost every ancient place of political and religious importance. It is where Lucifer’s Fallen Angels come from and from where perhaps some ‘left their 1st Estate’, meaning place of habitation on one level of interpretation. The other is that they, being spirit, somehow took on ‘strange flesh’ to be able to have sexual intercourse with women of Earth to dilute the human race on a genetic level. As in the Days of Noah, this was very prevalent to the point that only Noah was found to be a pure human, genetically. Jesus stated that such technologies and genetic manipulation would occur to such levels just before His return. It is such a time now.
___________________