‘Celebrate the Festival of Weeks with the firstfruits of the wheat harvest, and the Festival of Ingathering at the turn of the year. Three times a year all your men are to appear before the Sovereign LORD, the GOD of Israel. I will drive out nations before you and enlarge your territory, and no one will covet your land when you go up three times each year to appear before the LORD your GOD’. –Exodus 22:22-24

The purpose of this study is to chart astronomically the commemoration of the 50th year anniversary of the liberation of Jerusalem during the 1967 Six Day War in Israel. The anniversary is based on the 365 day/year count. The Jews celebrated this anniversary on May 25, 2017 according to the Rabbinical Calendar. Within the context of this prophetic milestone, the anniversary will be pegged to the Great Sign of Virgo as depicted in Revelation 12 and many believe will be realized astronomically on September 23, 2017. What is most notable to observe is that the planet Jupiter in the constellation of Virgo appears to take center-stage both in terms of time and its station on the Ecliptic during the season of Pentecost. In particular, the retrograde of Jupiter concludes on June 9, 2017.

This time and positon of Jupiter is just after the historical dates of the war from June 5, 1967 to June 10, 1967, that the Temple Mount and the Old Jerusalem sector was recaptured by the Jews. This portion of the land in Israel had not been under Jewish control since 70 AD when the Prince that came, Titus destroyed the Temple, the City and exiled the Nation. A 2nd observation has to do with equating the Virgo Sign with that of the nation of Israel, pertaining to the Revelation 12 celestial composition. The Tribe of Judah from where the word ‘Jew’ come from is the last remaining of the 12 sons of Jacob that YHVH allowed due to the promises made to Abraham and David, etc. This study suggests that the entire constellation of Virgo can thus be typified as that of the 12 Tribes of Israel or sons of Jacob as the Virgo constellation is made up of 12 stars.

This study also suggests that the entire constitution of Virgo can be construed to configure the 12 Tribes of Israel as they were configures also by pattern around the Tabernacle of Moses and the very Throne Room of YHVH in Heaven. If one starts with the western orientation, which is the opposite on the constellation of Virgo and move clockwise of the order of the tribes with the prominent tribe being fixed in the middle, then the layout superimposed on the constellation of Virgo from the eastern end along the Ecliptic will have some rather striking correspondence for the Pentecost season of 2017 concerning the planet Jupiter. This study suggests thus that the particular Tribe of Judah will correlate to Jupiter at this Jubilee anniversary that also occurs on Pentecost. Perhaps such a time is meant as if to portray a prophetic message perhaps.

Numerical Correlations
Specifically, Jupiter entered the constellation of Virgo from the ‘head’ region on August 13, 2016 and will exit beyond her ‘feet’, astronomically on October 13, 2017. This will be a total day-count of 1 year and 2 months or 60 weeks and 6 days. This numerical correlation could suggest ‘12’ as in the 12 Tribes of Israel and 66 for 1966, the year the Jubilee started and ended in 1967. This will later be discussed as how it directly relates to Israel. The station of Jupiter on June 9, 2017 is dead center in-between the 2 dates of October 13, 2017 when Jupiter exits Virgo and when it started its retrograde on February 6, 2017. This position or station of Jupiter is when it happens to complete its retrograde that started in February 6, 2017 and ended on June 9, 2017. This timing is uncanny as it is just before the end of the Six Day War on June 10, 1967 and 7 day from the day of Pentecost, according to the Torah Calendar count for the year 2017.

It is as if Jupiter is astronomically highlighting this season of Pentecost with its retrograde. There are other unique mathematical correlations concerning Jupiter and day-counts during this time. For example, the actual ‘gestation of when Jupiter entered the ‘womb’ of Virgo’s ‘womb’ region began on November 20, 2016 based on the modern celestial delineation of the constellation and ‘birthed’ on September 9, 2017 for a total of 9 months and 20 days. The actual retrograde of Jupiter started in February 6, 2017 and ended on June 9, 2017 for a total of 123 days or 4 months and 3 days. Also in comparison, from the start of the retrograde on February 6, 2017 to the ‘birthing’ of Jupiter on September 9, 2017 is 7 months and 3 days. Amazingly, this timespan leaves a difference in terms of time of 3 months and 3 days (33) to the ‘birthing’ date of September 9. 2017.

It is understood that this typology of Jupiter in Virgo is akin to a human gestation period and thus many are excited that this Jupiter-Virgo phenomenon could be signaling a prophetic event to be shortly fulfilled. Again, this study suggests that it will not be the rapture of the Bride of Christ but that instead a nefarious ‘birthing’ as in an advent or debut of the AntiChrist will be had; perhaps. Also amazing is that from the start when Jupiter first entered Virgo in August 2016 to its exit on October of 2017, Jupiter’s station of June 9, 2017 is at an approximate phi ratio of time to these 2 dates. Also the phi ratio is seen in other associations of time pertinent to Jupiter. For example, Jupiter’s June 9, 2017 end of its retrograde is in approximate phi ratio to when it first started its retrograde in February 6, 2016 to the Great American Solar Eclipse of August 21, 2017.

Upon further observation, other celestial occurrences will also have a similar phi ratio correlation in terms of their timing. For example, the Great American Eclipse is in approximate phi ratio of time to the ‘birthing’ of Jupiter on September 9, 2017 and to the Revelation 12 Great Sign occurrence. Also the ‘birthing’ of Jupiter on September 9, 2017 is in approximate phi ratio to the Great Sign of Revelation 12 on September 23, 2017 and when Jupiter exits the constellation of Virgo on October 13, 2017. As noted, the constellation Virgo, in the context of the Revelation 12 Sign is suggested that its depicts Israel that birthed the Messiah and will have its martyred Remnant also raptured during the Tribulation Period, whenever that occurs. It has not been noted in the study of the Great Sign of Revelation 12 that the Virgo constellation exactly has 12 stars. The following are some of the highlights concerning the Jupiter-Virgo correlation in terms of numerical counts and in relation to the Jubilee anniversary of the 6-Day War.

On an aside note, it is rather interesting that according to the Gospels, Jesus celebrated on Earth all the Feasts of YHVH during His lifetime except 1, Shavuot or Pentecost. Is this coincidence or a cryptic glue concerning the Church and the possible Rapture timing? The following are the passages from the Gospels that testify of Jesus’ involvement with the Holy Feasts of YHVH.

As in prior studies entitled, The Olivet Discourse, Keys of Restoration, this study suggests that the code was given as to the sequence of not only Israel’s demise for having rejected Jesus as the Messiah and missing His day of visitation but that in such a reverse order, the restoration of the Nation with the Exiles returning was to occur. Then the City to include the Temple Mount was to be restored to Israel. Lastly, someday the 3rd Temple will be constructed. Thus the Six Day War was the 2nd of the 3 prophetic restorations that will eventually lead to the 70th Week of Daniel. Coincidentally, 2018 will be the 70th year anniversary of Israel being ‘birthed’ in 1948. Moreover, in 2018, it will have been 1948 years since 70 AD. This study seeks to highlight what the celestial signs will look like in Virgo during the Jubilee anniversary of June 7, 1967 when specifically the Temple Mount was liberated from the Muslims.

The Jubilee War
Out of all the 12 constellations, Virgo is chosen for this Jubilee and Pentecostal correlation with the 6-Day War anniversary due to the notoriety of the Great Sign of Virgo that appears to configure at least astronomically in the Fall of 2017 just after Rosh HaShanah. Another indication of its association with Israel is that the Revelation 12 Sign pertains to Virgo being depicted as the nation of Israel that gives birth to the Messiah. It is not the Christian Church, nor the Catholic Mary, etc. Although the Revelation 12 imagery is very striking and has a ‘rapture’ component, the woman is not of the Bride of Christ that is depicted in chapter 4 with the Apostle John. Such a sign in Revelation 12 is given as to what will take place in the future, after the Rapture. The Revelation 12 Sign is just that, a sign that announces what is to come.

The Sign is not the event itself and although it occurs astronomically in 2017, its fulfillment may not be seen for years to come perhaps. It could also signal that on the contrary to what most Christians are expecting, the Rapture, the astronomy of prophecy also has its antithesis thanks to the fallen nature of the Cosmos, and Humanity at the hands of Lucifer. An Overcomer’s salvation does not require one to have the doctrine of the Rapture correct or that all be in agreement, eschatologically. However, ones salvation theology will influence one's Eschatology, so there will always be an assortment of theories and conjectures about when the Rapture will take place and what it is constituted by. This study suggests that the confusion is brought about by the lack of understanding the dispensations of prophetic time that delineates when one Age ends and when one begins. However, such changes in dispensations or ‘Covenants’ have occurred around Pentecost
___________________________ 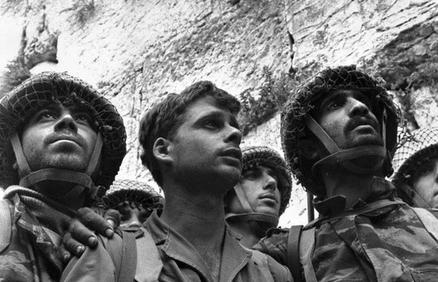 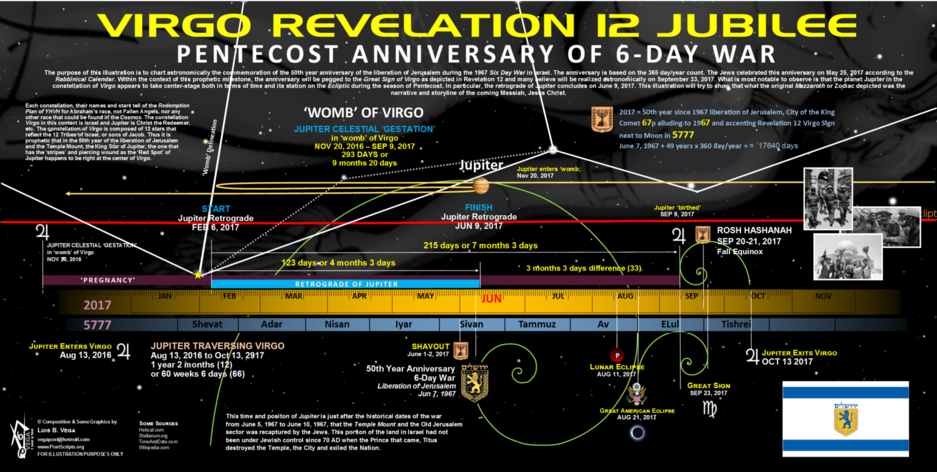