The purpose of this study is to consider the new technology that seems is coming along at the right time to administer the coming mandated COVID-19 vaccinations. Interestingly enough, the COVID-19 vaccine is said that it will not be administered by way of the conventional known hypodermic type of injection. It will be a patch, much like a band-aid applied to the skin. What is the need to have to write about this, from a Biblical End of Days perspective? Because of the background and rationale of why it was thought of and developed. The study will consider why the team of researchers who have created this delivery system were inspired by snake fangs and its bite or sting. Thus, here one has an imagery of the snake biting a human, which naturally if untreated would very well lead to certain death.

It is a universal motif of evil and of sinister motives. The primary depiction being that of the Garden of Eden with the Shining One. He was as a ‘Serpent’ that manifested and cause Humanity to sin and fall. It was in essence a ‘bite into the flesh’ of Humanity, that is of Adam and Eve that resulted in their Eternal Death. In fact, the Apostle Paul in the New Testament refers to this account in how Jesus took that sting or bite of Death for Humanity to redeem it though His blood and death. But upon His resurrection, only in Jesus has Eternal Death been cancelled. Jesus is the only ‘antidote’ to the venomous effects of the Serpent’s ‘Sting’ and how Jesus has bestowed Eternal Life instead.

It was in the Garden of Eden that YHVH directly referenced a ‘stinging’ to occur as the Snake was condemned and judged. It depicted how Lucifer or how he is also portrayed as the Great Serpent, the Devil would ‘bruise His heel. But He, Jesus would crush the head of the Serpent. This would set the stage of the evermore spiritual struggle between Jesus and Lucifer, but also between those People believing and following either Jesus or Lucifer, to the very end of time. This is why many Christians are a bit alarmed at the symbology of this new vaccine delivery system. Why? The Micro Needle Patch will eventually incorporate Quantum Dot Nanotechnology to it. Why is this an issue? This type of additional technology will enhance the capacity of the vaccine to deliver more than just a virus antidote. The Micro Needle Patches that is transdermal, and about the size of one’s thumb. The 100s of microneedles will gently deliver vaccination, information with only a mild pressure applied to the surface of the skin.

The Sting of Death
The idea of the microneedles was taken from how the fang of some snakes are grooved and use capillary action as well as surface tension to quickly inject venom or saliva into its prey. Will it be no different for humans? The patches are arrayed with microneedles that consisted of three to six grooves that likewise rapidly and efficiently delivers the vaccination sought and more if desired. This is the issue. It is anticipated that the Micro Needle Patches will be highly successful and will revolutionize the immunization process as patients prefer transdermal patches over the traditional and painful hypodermic way. As it is, many people have a phobia of needles as some even pass-out or bleed. Hypodermic needles also increase the risk of infection and are not able to work with certain liquid drugs. The Micro Needle Patch will solve all these impediments.

Because of the great surface tension, the Micro Needle Patch will be less painful than a large hypodermic needle. And as noted in comparison to a snake bit, the administration of the vaccinations will be fast. According to research, patients would receive a dose in less than 15 seconds. Then, this form of vaccination will not require the expensive infrastructure that is needed to refrigerate the vaccines. Freeze-drying liquid vaccines and/or the medication can be time-consuming and a complex process. Plus, many medications are more effective in a non-liquid state. Then a fast and effective delivery of the patches would be possible through mail carriers, for example as one mode of delivering the patches to people on a mass scale. And just in time for the mandated COVID-19 vaccination that will be required to return ‘back to normal’.

Micro-needling may be the newest craze in beauty and skincare, but the technique is now going to be used as the primary delivery systems for medications, contraceptives, and the COVID-19 vaccines. The initial ones may still be in the form of a hypodermic needle and not ‘mandated’. But eventually, the one that will have all the additional ‘bells and whistle’ will be rolled out and mandated. It should be noted that with the coming COVID-19 Micro Needle Patch, it will be different than those used for cosmetic and other medical conditions like diabetes. This type of patch will eliminate the pumping systems and the extra steps required with other microneedle patches. The patch takes advantage of capillary action, the movement of water molecules through narrow spaces, to get the vaccination to flow through the skin without a pumping system.

And where did all this inspiration come from? The ‘snake’. Contrary to popular belief, very few venomous snakes have hollow, needle-like fangs that they use to inject venom into their prey. Rather, many snakes are equipped with grooved teeth that allow for the easy flow of venom from fang into the skin. The researchers used this groove simile as inspiration but those who are cognizant of the Biblical overtones are not so sure of its eventual use or misuse. In what way? As the ‘Sting of the Snake’ is a Biblical euphemism for sin and certain death, Eternal Death, receiving this sort of vaccination opens the door for what will eventually be implemented through it, the Mark of the Beast. Is one serious about this? Yes. It is because in the Bible, it states that in the Last days, a ‘Mark’ or tattoo type of application will be made into or on a person’s right arm or forehead. That without it, ‘no one can buy or sell’. What does that have to do with a vaccine or the Micro Needle Patch?

It is because patents have been applied for by the mega corporations that also patents or viruses by the way, to have the vaccine later on augmented to be connected to Blockchain for example. This will be done through Hydrogel and Nanotechnology to then upload one’s biometrics. A person would then be monitoring 24/7 and tracking would eliminate one’s privacy. Moreover, this level of technology would connect one’s body directly to a Digital Wallet whereby currency would be added or subtracted to ‘buy and sell’. And what is nefarious and what is possibly suspected of happening is that for some or any reason, one’s connectivity to the ‘grid’ can be ‘turned off’. Or in other words, a person’s digital bank account could be cancelled, limited or closed.

It would render such a person not being able to ‘buy or sell’. The problem? This now becomes a matter of life or death and how one’s own right to life and resources will now be totally controlled by others. Sure, medically and technically speaking, this new venue is amazing and revolutionary. The patch successfully could improve the lives of billions potentially. The question will be, will it really, spiritually, eventually? Consider the following and its continual connection to Lucifer, the Snake. Each micro needle will dissolve beneath the skin once applied and will not be traceable unless a detector would be added to it. Hello Luciferase, or is it or will it eventually be ‘Lucifer’?

The Luciferase will be placed into this delivery system so that only by a scanner, can it be detected to ensure who has been or not vaccinated with the Micro Needle Patch. It so happens that the immunization vaccines will be laced with Luciferase. It is the enzymes that make for example fire-flies light up at night or other type of creatures in the sea. However, again, this element has problematic Biblical overtones to the ultimate ‘Snake’, that being Lucifer the Devil. The name Lucifer means ‘Light Bearer’ and is healed by many to be actually the benevolent and wise one, the Shining One that brought ‘illumination’ and fire to Humanity.

So, the semantics and Biblical overtones cannot be ignored, and is putting on edge those Christians that are aware of this motif and symbolic overtones. This is because of what the Bible in the last book, of Revelations foretells what such a system will delivery, death. Eternal Death. In what way? According to the account, one Humanity and time intersect for this to occur, those that receive this ‘Mark of the Beast’ will be damned to perdition, forever. Why? Because as many Doctors have come out and alerted the public, the Quantum Nanotech Patch vaccine will introduce mRNA that will change and/or alter the DNA of a human. This would render then a human, a non-human or hybrid. Since Jesus only came to die for 100% humans, such will be outside of this creation as it has been altered by the ‘bite of the Snake’, that Lucifer now literally inside.

Spiritually speaking, what Jesus Christ came to do was to reverse the curse of the Fall of Humanity and take upon Himself the ‘Sting of the Serpent’. But in ‘crushing the head’ of Lucifer at the Cross of Calvary, Lucifer put the ‘Sting of Eternal Death’ upon the Son of GOD in the flesh. Satan had power of not only physical death, but Eternal Death over on Earth concerning every human being. It rather amazing that when the Teacher of Israel, Nikodemus came to Jesus by night, Jesus told him directly that, ‘as Moses lifted up the Serpent in the desert, so too must the Son of Man be lifted up’.And that in so doing, Jesus would draw all mankind to Himself, as the antidote. Here one has an incredible depiction of Jesus being associated with a ‘Serpent’, but not one that came to destroy it but to save it and reverse the curse of the Serpent, that is Lucifer. In other words, Jesus ingeniously used Death to destroy Death, a ‘Snake for a Snake’ if one wills. It is akin to what also then occurred as a dual between the Staff of Moses and the Staffs of the Luciferian Magicians of Pharaoh in Egypt during Israel’s captivity.

Is it any wonder why the emblem or motif of the UN World Health Organization has the Snake on a Pole as their shield. However, it is not in reference to Numbers 21 of the Torah and the account of Moses with the healing agent given to cure the Israelites. It is reminiscent of the Caduceus of Mercury, the ‘God’ attributed to Lucifer instead. And consider that the ‘Pole’ was actually a cross on which the Bronze Serpent was sustained. Also consider that this WHO emblem is set to the backdrop of the iconic blue flag with the top view of the world. However, the total number of quadrants equals, 33. This is the iconic Masonic and Luciferian number that has been usurped for their nefarious purposes. Will this Micro Needle Patch be used in such a way eventually? One should recognize that technology is technology and neutral. It would be the same question posed of weaponry, whereby arms can be used to protect lives but also to murder. Is this emblem, ‘emblematic’ of how the Serpent, Lucifer will eventually dominate and rule the entire globe, through a Medical Martial Law scheme? Yes. 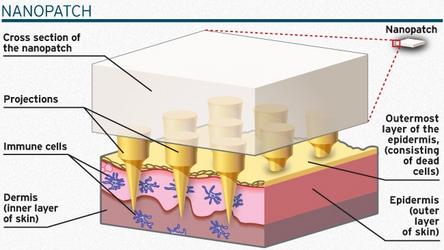