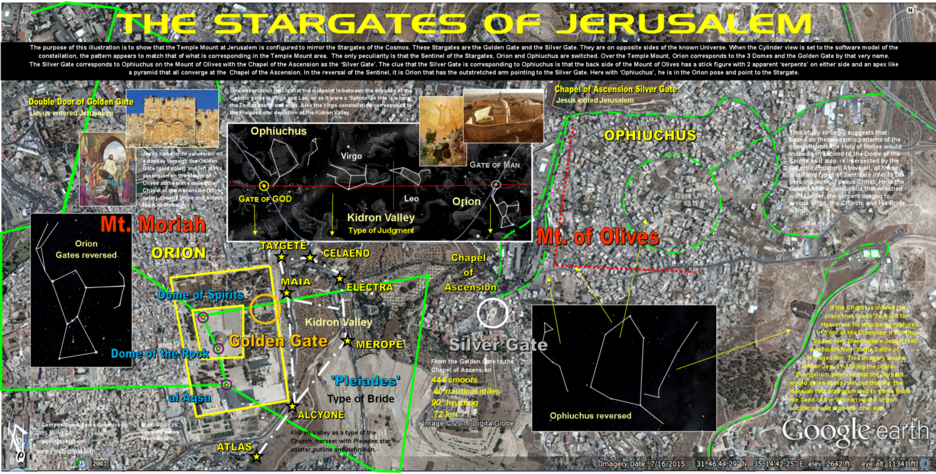 ‘The Heavens declare the glory of YHVH; the skies proclaim the work of His hands. Day after day they pour forth speech; at night they reveal knowledge. They have no speech, they use no words; no sound is heard from them. Yet their voice goes out into all the Earth, their words to the ends of the world. In the Heavens YHVH has pitched a tent for the Sun. It is like a Bridegroom coming out of his chamber, like a champion rejoicing to run his course. It rises at one end of the Heavens and makes its circuit to the other...' - Psalm 19:1-6

The purpose of this study is to show that the Temple Mount at Jerusalem is configured to mirror the Stargates of the Cosmos. These Stargates are the Golden Gate and the Silver Gate. They are on opposite sides of the known Universe. When the Cylinder view is set to the software model of the constellation, the pattern appears to match that of what is corresponding in the Temple Mount area. The only peculiarity is that the Sentinel of the Stargates, Orion and Ophiuchus are switched. Over the Temple Mount, Orion corresponds to the 3 Domes and the Golden Gate by that very name. The Silver Gate corresponds to Ophiuchus on the Mount of Olives with the Chapel of the Ascension as the ‘Silver Gate’.

The clue that the Silver Gate is corresponding to Ophiuchus is that the back side of the Mount of Olives has a stick figure with 2 apparent ‘serpents’ on either side and an apex like a pyramid that all converge at the Chapel of the Ascension that is silver colored. In the reversal of the Sentinel, it is Orion that has the outstretched arm pointing to the Silver Gate. Here with ‘Ophiuchus’, he is in the Orion pose and point to the Stargate. In another chart study called the Gates of Orion; this Mount of Olives is shown to depict an ominous out-stretched winged flying dragon. The depiction is that of the Golden Gate, gold colored ‘doors’ of Heaven’ corresponds to Mt. Moriah. The very Chapel of the Ascension corresponds to the Mt. of Olives and the ‘eye’ in the ‘head’ of the dragon that is directly in front of the Golden Gate that leads into the Holy of Holies. It is as if the Red Dragon is assaulting the very House of YHVH as Lucifer did in Heaven.

Also, if the Chapel is indeed the place that Jesus’ foot left for Heaven as He was being raptured in front of His Disciples, it will thus be the very place where Jesus’ feet will touchdown at the Battle of Armageddon. This imagery would render Jesus fulfilling the proto-Evangelium promise. The Messianic promise was that the Serpent would strike at his heel but that He, the Messiah that was promised to come from the Seed of the Woman would ‘crush’ Lucifer’s head with his ‘one’ eye. One observation that is very interesting is that the midpoint in-between the expanse of the Cosmic gates is Virgo and Leo, or as it were a ‘Sphinx’ as this is where the Zodiac starts and ends. Also, the Virgo constellation corresponds to the Pleiades star depiction of the Kidron Valley.

Concerning the Kidron Valley, it is a type of the place of judgment. In this ‘gulf’, astronomically, in-between the Sentinels that start both with the letter ‘O’, there is the Southern Cross and Hydra. This suggests that sin was judged at the Cross by way of Jesus, the Messiah and that also Lucifer as the ‘Dragon’ of Revelation was also judged. The following measurements are an approximation based off of GoogleEarth coordinates from the Golden Gate to the Chapel of Ascension, the ‘Silver Gate’.

This study strongly suggests that based on these cosmic patterns of the constellation, the Holy of Holies would indeed correspond to the Dome of the Spirits as it also is intersected by the Galactic Equator and 2 other ley-lines. These 2 other ley-lines are that of the Golden Gate east-west orientation and the Old Jerusalem north-south city street. Above all, all these motifs and types of Sentinels that are the ‘Guardians of the Galaxy’ sort of speak infer to the personal work of Jesus Christ. He is the ‘Orion’, the Victor or sin, death and Lucifer and the ‘Ophiuchus’ that wrestled with Lucifer, the serpent dragon to rescue Virgo, the Church, and His Bride within.

Literally, it was Jesus that came in  to Jerusalem on a donkey through the Golden Gate and left Jerusalem at His ascension on the Mount of Olives at the place called the Chapel of the Ascension directly inline and across the Kidron Valley. According to the Zechariah and Revelation, the Messiah will touchdown on the Mount of Olives and split Jerusalem in 2 as there is an earthquake fault line that runs through the Kidron Valley. It will be from there that Jesus will once again enter the Golden Gate of the Earthly Mt. Zion but this time, not as the sacrificial Lamb of YHVH but as the conquering Lion of the Tribe of Judah.
______________________ 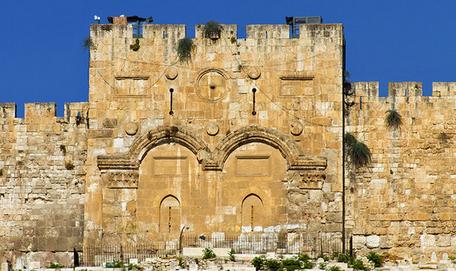