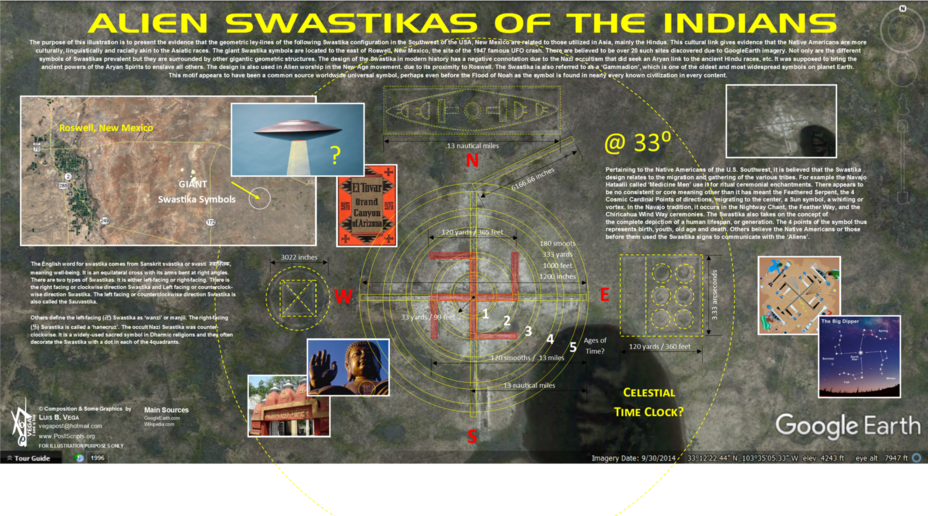 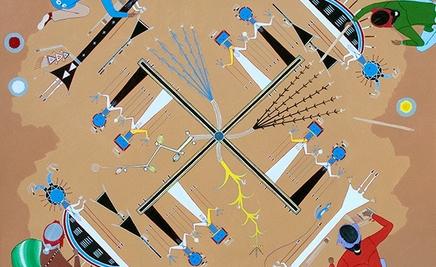 The purpose of this study is to present the evidence that the geometric ley-lines of the following Swastika configuration in the Southwest of the USA, New Mexico are related to those utilized in Asia, mainly those of the Hindus. This cultural link gives evidence that the Native Americans of the Americas are more culturally, linguistically and racially akin to the Asiatic races. The giant Swastika symbols are located to the east of Roswell, New Mexico, the site of the 1947 famous UFO crash. There are believed to be over 20 such sights discovered due to GoogleEarth imaging. Not only are the different symbols of Swastikas prevalent but they are surrounded by other gigantic geometric structures. The design of the Swastika in modern history has a negative connotation due to the Nazi occultism that did seek an Aryan race link to the ancient Hindu races, etc.

The motif was and is supposed to bring the ancient powers of the Aryan Spirits to be harnessed to re-create the master Aryan Race and enslave all others. The symbol however is to grant favor and good fortune. The design is however, also used in ‘Alien worship’ in the New Age movement due to its proximity to Roswell. The Swastika is also referred to as a ‘Gammadion’, which is one of the oldest and most widespread symbols on planet Earth. It appears to have been a common source worldwide universal symbol, perhaps even before the Flood of Noah as the symbol is found in nearly every known civilization of every continent. The English word for Swastika comes from Sanskrit svástika or svasti  स्वास्तिक, meaning ‘well-being’. It is a geometric equilateral cross with its arms bent at right angles. It can be depicted either left-facing or right-facing. There are basically 2 types of Swastikas. The right-facing is clockwise and the left-facing is counterclockwise. The motif is also often portrayed tilted on its axis.

The left-facing or counterclockwise direction Swastika is also called the Sauvastika. Others define the left-facing (卍) Swastika as a ‘wanzi’ or manjii. The right-facing Swastika (卐) is called a ‘hanecruz’. The occult Nazi Swastika was counter-clockwise. It is a widely-used sacred symbol in Dharmic religions and it is often decorated with a dot in each of the 4 quadrants. Pertaining to the Native Americans of the U.S. Southwest and their use of the motif, it is believed that the Swastika design relates to the migration and gathering of the various tribes. The Navajo Hataałii called ‘Medicine Men’ use it for ritual ceremonial enchantments. There appears to be no consistent or core meaning other than it has meant the Feathered Serpent, the 4 Cosmic Cardinal Points of directions, migrating to the center, a Sun Symbol, a whirling or vortex. In the Navajo tradition, it occurs in the Nightway Chant, the Feather Way, and the Chiricahua Wind Way ceremonies. The following are approximate measurements taken from GoogleEarth.

Top rectangle UFO motif: .13 nautical miles in length
‘X’ Box within circle on west side: 3022 inches in length from diameter.
Smaller rectangle on east side with 6 circles: 120 yards / 360 feet in length and 3.33 arcseconds high
Line protruding to the northeast from centerline of cross: 6166.66 inches

The Swastika also takes on the concept of the complete depiction of a human lifespan, or generation. The 4 points of the symbol thus represents birth, youth, old age and death. Others believe that the Native Americans or those before them used the signs to communicate with the ‘Aliens’ as the top rectangle motif appears to be designed as a possible UFO saucer disk shape.
_________________________