‘Jesus replied, Blessed are you, Simon son of Jonah! For this was not revealed to you by flesh and blood, but by My Father in Heaven. And I tell you that you are Peter, and on this rock (Jesus) I will build My Church, and the Gates of Hades will not prevail against it. I will give you the Keys of the Kingdom of Heaven. Whatever you bind on the Earth will be bound in Heaven, and whatever you loose on Earth will be loosed in Heaven. –Matthew 16:17-19

The Gates of Hades
The purpose of this section is to illustrate the place in Caesarea Philippi where the ancient Sanctuary to Pan stood. According to Jesus who ministered there with His Disciples, it was the Gates of Hell or the ‘Portals of Lucifer’. For sure it was a spiritual and very ancient stronghold of Satan. The god Pan was the personification of the sexual powers and music of Lucifer. Caesarea Phillip was in the northern part of Israel in the Golan Height.

It was the domain of the tribe of Dan and it is the source of the River Jordan. The city was said to have been built on top of the rock formation at the base of Mt. Hermon. This mount was the place that according to book of Enoch, the 120 Watcher Angles descended. The Bible and other extra-Biblical texts teach that such left their 1st Estate to mate with human women. The explicit purpose was to thwart YHVH”s plan to redeem Humanity through a genetically perfect human that is the promised Messiah, Jesus.

It was on Mt. Hermon that some Bible Scholars believe that it was the Mountain of the Transfiguration. This is when Jesus took Peter and the Sons of Thunder, James and John. If the Transfiguration of Jesus took place on Mt. Hermon, it would be very symbolic of a gesture. This would imply the Jesus as the 2nd Adam, the ’God-Man’ came to reclaim the rebel territory of the Watchers.

This stop in the ministry itinerary also served to give Lucifer and his ’Gates’ or portals notice that they would not prevail over the Church and Church Age. This presumes that Lucifer would and is currently trying to nonetheless with relentless force. Also as Caesarea Philippi was built upon the ’rock’ of Pan, Christ promised to build His Church upon Himself, the Rock. Any one confessing the same as Peter did that Jesus is the only true GOD would be used to build this ’city on a hill’, the coming New Jerusalem a Bride prophetically speaking.

Jesus Christ spoke about another ‘Portal’ or Gate of Heaven that can only be opened by a certain ‘Key’. This key is none other than Jesus Himself. The Key is to the coming Kingdom of Heaven and the confession about who Jesus is the corresponding key ‘combination’. The Bible states that He is the only Door to get into Heaven. It is accessed and can activate power apparently not only on Earth but in Heaven. The power is through prayer that can loosen and bind in the authority of such a confession as Peters.
_____________________ 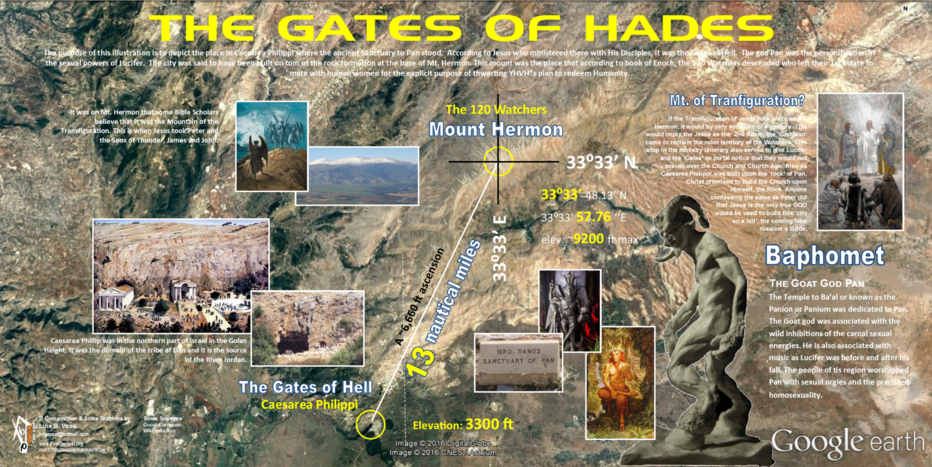