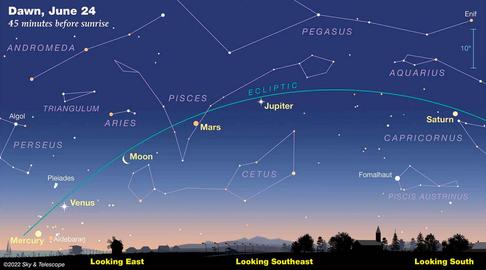 #640:
RAPTURE PLANETARY PARADE?
COUNTDOWN TO A DIVISION
Alignment of a 'Disappearance' and Separation

One Observation in how the Visible Planets, 5 in total are ordered in their Respective Distance from the Sun. This is amazing. The other observation is that all the Planets, both Visible and not, are to the Right Side of the Sun, from a Top View of the entire Solar System. This is also amazing. The rest of the Observations have to do with how such an Alignment may have Biblical Implications as part of the Signs that occur in the Sun, Moon and the Stars, per the Prerogatives of YHVH in the Bible. What would be some of such Signs? The following well suggest possible Interpretations that one believes could have implications for the End of the Church Age and the occurrence of the Resurrection-Rapture event. How so?

Consider the following subsequent Observations. The Planetary Parade is different from the last one in December of 2004 in that the Planetary Parade did not occur in their relative Natural Order as it is on June 24, 2022. And neither are all the Planets on 1 side of the Sun. What is interesting, is that based on one’s Double Count Pentecost Theory, that being 49 Days + 50 Days per an Alternative Interpretation of Leviticus 23:16, the proposed true Date of Pentecost is July 23, for the year 2022. How the Great Planetary Alignment fits into the Prophetic Equation is that it is exactly 1 Month or 30 days out from this Projected Date.

One wonders if this is the Last ‘Line-up’ before the Rapture even to close-out the Church Age. What do all the Planets, this Time being on 1 side of the Sun mean? One would suggest that the meaning suggests a ‘Division’ or Separation is being made or will be: Biblically Speaking? ‘Goats to the Left, Sheep to the Right’? Or perhaps, the ‘Raptured Saints’ over here, those of the World to stay, over there? It was Jesus and then the Apostles that taught that those Followers and Believers of Jesus are the Sons of Light, and not the Sons of Darkness. And Light does separate Darkness.

Sons of the Light
This is a clear indication, one would strongly suggest is then possibly Prophetic as the Meaning of Uranus is associated with the God or the Sky. And that is where the Rapture will take place, in the Clouds, the 1st Heaven, etc. Specifically, Uranus is the 7th Planet from the Sun. Its Astronomical Symbol is a Dot within a Circle having an Arrow pointing up to the Sky. Thus, this is now relevant the Rapture Typology is, in that it corresponds to Earth’s Position and Time in the Line-Up, to suggest that the Great Planetary Alignment is specifically ‘signaling-out’ Earth. That a certain ‘Event’ is to take place, a ‘Disappearance’, that is there and then it is gone on Earth, etc. And what would that be?

The Sons of Light being ‘Raptured’, gone? This is not to say that the Rapture occurs on this Date, as the Sign is not the Event. So, this rare Great Planetary Alignment or ‘Line-Up’, in the 5 Visible Planets being in their Natural Order from the Sun, is a Once-in-a-Century event. And such an Alignment will not re-align until 2040. The next Astronomical Observation has to do with Orion. How so? If one plots the Planets in the Line-Up along the Ecliptic, one will see that just 3-4 Days after the Summer Solstice the June 24, 2022 Alignment reached its Peak Configuration appear to be led by Orion.

In the depicted Outline of the Motif of the Constellation of Orion, his gaze is opposite the direction and inclination of the rest of the Constellations where the Planetary Line-Up is occurring. The point is that the Anthropomorphic attribute of Orion is that of a ‘Conductor’. How so? Orion is appearing as the ‘Light to the Worlds’ as is Jesus, the Light of the World. Orion has the Sun as its ‘Torch’, orchestrating the Planets. So, the possible Prophetic Overtones is that, on one Hand, this Orion Motif is acting like a Christ-Like Figure. How so? It is Orion, like Christ Jesus, the Light of the World that is Illuminating the Way, leading the Line-Up of the Planets. But he is designating Earth’s Place in particular as mentioned of a Disappearance that is forthcoming.

A Heavenly Light will go out with the Moon Eclipse that is Earth’s Position. Again, this denoted by the Moon’s Occultation of Uranus, the 7th Planet. It could infer being that of the 7 Churches of Asia. Thus, the Disappearance of the Church Age Believers, being ‘Lights’ also as Jesus called His Followers will insure. At the Resurrection-Rapture event, they ‘Disappear’, from the Earth. It is as though their ‘Lights go Out’, as far as the Earth is concerned, will be left in Spiritual Darkness, ready to go into the 7-Years of Tribulation Darkness. When? That remains to be seen as the Sign, is not the Event.

But as some have suggested, perhaps a 30-Day Countdown to the July 23 proposed true Pentecost Date could be that Time. This is pure Thought/Conjecture, but in terms of a ‘Departure’, what happens to the People as they are ready to Board the Plane as the Announcement is made for the Pre-Boarding Call? The Passengers get Lined-Up. So, is this unique Planetary Line-up, Jesus’ way of signaling, ‘Hey’ Line Up’, one is about to board Flight 777 for Departure? That is to rendezvous in the Sky, as in Uranus?

It could just be Wishful Thinking and one may be reading too much into this Alignment of the Century. But it could be a Sign, Prophetically Speaking of how Jesus is to separate the Children of Light from the Children of Darkness, on Earth, as that is what the Resurrection-Rapture is all about, a Division, a Separation. It will be as an Occultation that will see Jesus’ Followers one Moment and gone the Next. So, it is just one of those topics that show the Wonders and Mysteries of the Sun, Moon and the Stars in how everything has an order and sequence, but also for Signs and Seasons, a Call.
________________________

All Planets Have Aligned In The June Sky And You Should Not Miss This Show
The Secrets of the Universe
https://www.youtube.com/watch?v=78crD1l1sCA

#639: 7 REASONS WHY ISRAEL WILL GO TO WAR WITH 6 ENCIRCLED MUSLIM ENEMIES THIS SUMMER
https://www.postscripts.org/ps-news-639.html

#618: WHY ‘PENTECOST’ AND THE RAPTURE CANNOT OCCUR IN THE SPRING
https://www.postscripts.org/ps-news-618.html