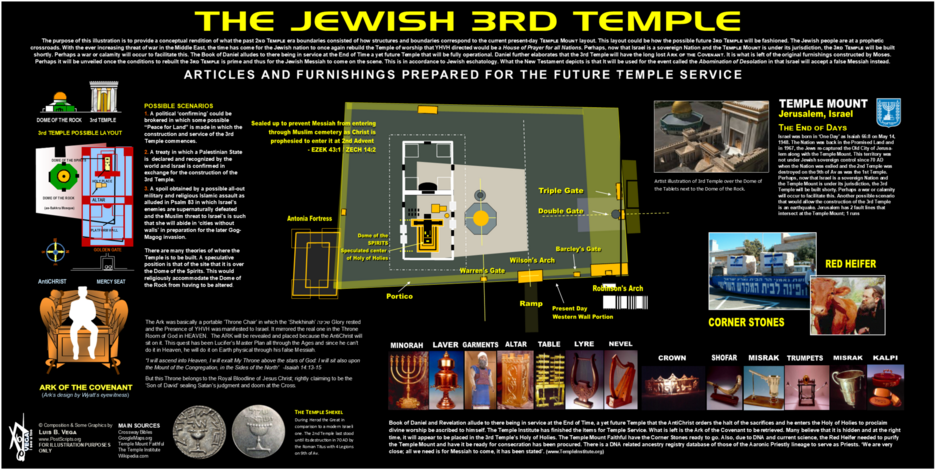 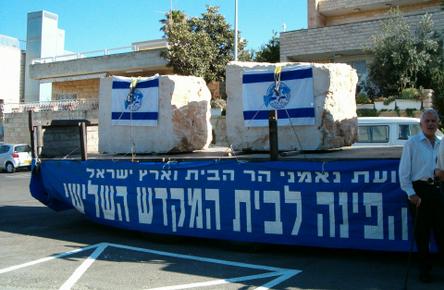 #306:
​THE JEWISH 3RD TEMPLE
ARTICLES AND FURNISHINGS
Preparations are Ready for the Daily Sacrifices to Begin

‘I will ascend into Heaven, I will exalt My Throne above the stars of God: I will sit also upon the Mount of the Congregation, in the Sides of the North’  -Isaiah 14:13-15

The purpose of this study is to present a conceptual rendition of what the past 2nd Temple era boundaries consisted of on the present Temple Mount complex. This study suggests that the how structures and boundaries correspond to the current present-day Temple Mount layouts that can determine the dimensions of the coming 3rd Temple. The possible future 3rd Temple overlay might be based on such dimensions. Perhaps the possible timing of the 3rd Temple could very well be signaled by the conclusion of the Jubilee Year Cycle that could coincide with Israel’s 70th year anniversary in some manner. The Jewish people are at a prophetic crossroads. ‎‎Israel declared independence on 14 May 1948. The national state has not been in existence since 70 AD, 1948 long years from 2018. The Jewish population has now reached over 7 million in Israel proper.

With the ever-increasing threat of a world war in the Middle East, the time has come for the Jewish nation to once again rebuild the Temple of worship that YHVH directed would be a ‘House of Prayer for all Nations’. Perhaps, now that Israel is a sovereign nation and the Temple Mount is under its jurisdiction, the 3rd Temple will be built soon after the 70-year generation. Perhaps a war or calamity will occur to facilitate this. The book of Daniel alludes to there being Daily Sacrifices in the Last Days and in a yet future Temple that will be fully operational per Daniel 11:31. The Prophet Daniel further elaborates that the 3rd Temple will have the long lost Ark of the Covenant. It is what is left of the original furnishings constructed by Moses on Mount Sinai. Perhaps it will be unveiled once the conditions to rebuilt the 3rd Temple is prime and thus also for the Jewish Messiah to come on the scene to help facilitated this undertaking.

This long awaited false ‘Messiah’ will ‘confirm’ the Covenant but it will be the ‘Covenant with Death and Hell’ as the Prophet Isaiah foretold it will be. The false Messiah AntiChrist that will sit on the Ark of the Covenant and proclaim himself to be worshiped as ‘god’. This event is called the Abomination of Desolation that Jesus warned about during the Olivet Discourse. The books of Daniel and Revelation allude to the AntiChrist ordering the halt of the Daily Sacrifice as he subsequently enters the Holy of Holies to proclaim his divinity and required worship. This is understood by most Bible scholars to coincide with the Revelation 12 events which will be the halfway marker of Daniel’s 70th Week of Years. The Temple Institute has now finished the last of the Temple items for the Temple service. What remains of the Altar has now also been procured.

The Covenant with the Many
The Priestly Orders are trained and ready for service. The Ark of the Covenant will not be replicated as it is to be retrieved. Many believe that it is hidden and at the right time, it will appear to be placed in the 3rd Temple’s Holy of Holies. Another group called the Temple Mount Faithful has the Cornerstones ready to be set in place. Also, due to DNA and current science, the Red Heifer is also being procured. They are needed to purify the Temple Mount when it will be ready for consecration that is required before any building is allowed or the Daily Sacrifices to begin. There is a DNA related ancestry registry database of those of the Aaronic priestly lineage that will serve as the Priests. It has been stated. ‘We are very close; all we need is for Messiah to come’. The possible scenarios for the building of the 3rd Temple are as follows.

A treaty with the ‘Many’ is declared and recognized by the world and the ‘Covenant’ with Israel is confirmed in exchange for the construction of the 3rd Temple. The right to rebuilt on the Temple Mount could be the result of a spoil obtained by a possible all-out military and religious Islamic assault as alluded in the Psalm 83 War. This war may not be directly against the nation states but rather the paramilitary factions of the various Muslim groups dedicated at the destruction of Israel. This war would result in Israel’s enemies being supernaturally defeated and the Muslim threat to Israel’s security subdued to such a degree that she will abide in ‘cities without walls’ in preparation for the later Gog-Magog invasion of Ezekiel 38-39. There are many theories of where the Temple is to be built. This study strongly suggests that the speculative position is on the site that it is over the Dome of the Tablets.

This would religiously and politically accommodate the Dome of the Rock from having to be altered in any way, shape or form. Another possible scenario that would allow the construction of the 3rd Temple is an earthquake. An earthquake could demolish the Dome of the Rock and make way for the 3rd Temple. Jerusalem has 2 fault lines that intersect at the Temple Mount; 1 earthquake fault line runs north-south, the 2nd fault runs east-west. Both earthquake fault lines converge at the Kidron Valley. These fault lines could facilitate the splitting of Jerusalem when Jesus returns as described in Zachariah. It is understood that the 3rd Temple will be modeled after the one that was refurbished by King Herod. In reality, the 2nd Temple was built by Zerubbabel.

It replace the 1st Temple of Solomon that was destroyed on the 9th of Av. It last stood until its destruction in 70 AD by the Roman Prince Titus with 4 major Roman Legions to include the infamous 8th and 10th Legions on 9th of Av. There has been an amazing discovery of a mathematical dimensional code of prophecy revealed in David Flynn's book, titled Temple, Center of Time. In it, he postulates that the Dome of the Tablets is where the Holy of Holies should be, which this study strongly concurs with. From that reference point, ‘time’ can be measured to specific dates directly related to the effects of the Temple Mount throughout history. To test this theory, an illustration of the possible future 3rd Temple is overlaid on the Temple Mount based on perhaps what could be a pivotal clue using the Fibonacci Ratio. The theory presented here is that mathematically, the first phi ratio ‘spiral’ from the Dome of the Rock projects out to the Dome of the Tablets.

The Holy of Holies
This relationship and distance will establish the second phi ratio distance by using its similar dimensions from that same point to confirm that the distance corresponds indeed to the Dome of the Tablets. If the Dome of the Tablets is where the Holy of Holies was and will be, it would also correspond to other ley-lines that the overlay will show as well. Even though the current political status-quo is that the Muslim Waqf has administration rights given by Israel since the days of Dayan relinquished it after the 6-Day War, Israel has total sovereignty over it.

The Ark of the Covenant was basically a portable ‘Throne Chair’ in which the Shekinah Glory rested and the Presence of YHVH was manifested to Israel. It mirrored the real one in the Throne Room of YHVH in Heaven. The Ark’s design depicted in the charts is by Ron Wyatt’s eyewitness account. As noted, it is believed that the Ark of the Covenant will be revealed and placed in the 3rd Temple because the AntiChrist will sit on it as ‘king’. This quest has been Lucifer’s master plan since his revolt in Heaven and all throughout the Ages of human history. Since he cannot do that in Heaven, he will do it on Earth, physically by way of his false Messiah.

This earthly Throne belongs to the royal bloodline of Jesus Christ; rightly claiming to be the Son of David. It is he, the true Anointed One that has sealed Lucifer’s judgment and doom at the Cross of Calvary. To reiterate, the Bible declares that a 3rd Temple will be constructed. This occurrence will follow a ‘confirming’ of a Covenant, which many Biblical scholars believe to be a ratification of the Land Grant with a ‘Peace and Safety’ clause and/or condition added to it perhaps. This Covenant will only promise a false peace that will be guaranteed by a charismatic world leader that will head-up the New World Order.