‘Since the day I brought My People out of the land of Egypt, I have not chosen a city from any tribe of Israel in which to build a House so that My Name would be there, nor have I chosen anyone to be ruler over My people Israel. But I have chosen Jerusalem so that My Name will be there, and I have chosen David to be over My People Israel. Now it was in the heart of my father David to build a house for the Name of the LORD, the God of Israel.’ -2 Chronicles 6:6

The purpose of this study is to illustrate that the Old City of Jerusalem layout when rotated 33 degrees counterclockwise from true north will correlate to the ley-lines corresponding to the Great Pyramids of Giza. This template, in turn will thus correlate to the Belt Stars of Orion. Furthermore, the direct correlation to the Great Pyramids follows the color aspect of the Sun, Moon and the Stars with the respective color of the 3 main domes of Old Jerusalem. These 3 domes correspond to the 3 main religions of Islam, Christianity and Judaism. The layout is further corroborating that the Old City of Jerusalem layout also appears then to mirror the Celestial Order of the various Gates and orientation, that being the Golden Gate and the Silver Gate.

The depiction of the Old City of Jerusalem from a top view will show that the city has 3 main domes, the yellow or gold Dome of the Rock, the silver or grey dome of the Church of the Holy Sepulchre and the white dome of the Grand Synagogue. The 1st dome, that of the Dome of the Rock which is presently under Islamic occupation is gold in its composition and thus the corresponding color of yellow. Celestially, this principle dome thus corresponds to the Celestial Order of the Sun, and to Orion’s largest Star of Alnitak. It is the biggest of the 3 domes and corresponds to an octogen sided structure.

This octagon geometric configuration will depict a key marker in lending credence to this theory that Old Jerusalem is indeed corresponding to the ley-lines of the Giza Great Pyramid of Khufu that has been found to actually be an encrypted 8 sided octogen when seen from the air and especially when observing the shadow effects on it. The next dome that dots the skyline of Old Jerusalem is that of the Church of the Holy Sepulchre in the Christian Quarter. The main dome of the church is almost the same size as that of the Dome of the Rock and thus correlates to the 2nd Great Pyramid of Giza, Khafre that likewise is almost the same dimension as that of the Great Pyramid. This 2nd dome in size and Celestial Order corresponds to the Moon and thus has the color of the dome being silver or grey.

The City With A Name
This silver dome would in turn correspond to the 2nd Belt Star of Orion, Alnilam. The 3rd dome of Jerusalem is the smallest in terms of its size and supporting structure in comparison to the other 2 domes described. This dome pertains to the Grand Synagogue of Jerusalem in the Jewish Quarter. The color of the dome is white and thus corresponds to the Celestial Order of the Stars. In turn, this small white dome corresponds to the smallest of the Great Pyramids, that of Menkaure and the Belt Star of Orion, Mintaka which is also the smallest. What is also very interesting to note is that if one subscribes to the supposition that Jesus Christ was indeed crucified in-between the Garden Tomb and the place of the Skull, then the ley-line drown from north and south will lead the crucifixion site to the Grand Synagogue of Jerusalem.

Pertaining to the constellation of Orion, the mirrored image on Earth onto the map would orientate the depiction of Orion as being inverted on its axis and then flipped horizontally. Why is there an encrypted layout of Orion and the Great Pyramids of Giza and the apparent Celestial Order of the Sun, Moon and the Stars? According to the Bible, the Creator YHVH made the Celestial Order of luminaries. Their degree of correspondence and power were given for the illumination on Earth for the sake of the 1st Humans created there, those being Adam and Eve. This Celestial Order was then given for calculating and keeping track of ‘Time’. The next question is why Jerusalem?

According to the Bible, Jerusalem is the place on Earth, out of all the cites and locations where the Creator, YHVH chose to place His Name and be directly associated with that place on Earth where He and a fallen and separated Humanity would meet at the ‘Gate’ and receive atonement, etc. This is predicted on the storyline that the place YHVH made and placed the humans was in Paradise and in turn where they were expelled from. Specifically, the area of the Dome of the Rock, more specifically to the north was where the Temples stood. This location provided the confines by where a fallen Humanity could enter the vail to go into the Holy of Holies, a perfect cube and commune with YHVH as they did in the Garden of Eden. The following is the delineation of the various overlays of the Dome to Giza to Orion correlations.

It is rather amazing that if the rotation of a 33 degree is made, a match is made with the Giza Great Pyramids and the corresponding Stars of Orion. Why is the number 33 significant? According to the Bible, this number corresponded to the age of Jesus Christ when He died to pay the debt of sin for the fall of Humanity at the Cross of Calvary in 32 AD. It is a sacred number of Gematria and what is known more so is how the Luciferians use this same number for their antithesis. Astronomically, there is a 33-degree angle that orientates the whole Universe. When depicting the Mazzaroth or Zodiac and delineating it with the 4 Cardinal Points of Leo, Scorpio (the Eagle), Taurus and Aquarius, along with their corresponding Stars of Regulus, Antares, Aldebaran and Fomalhaut, the Celestial Throne of YHVH is identified to be positioned at the 33-degree angle from the Golden Gate.

In essence, Jerusalem is a sacred motif of what it takes and what or who is the way back to the Garden due to the fall of mankind, when the Gate was locked, and Celestial Sentinels were placed there. This would have been a sad state of affairs if it were not for Jesus wo came to open the Gate back to Paradise once again. This was accomplished by the foreseen sacrifice YHVH had to make to cover the bodies of Adam and Eve with. Instead the antithesis of the same motifs are attributed to the Serpent that has beguiled Humanity into an alternative ‘gospel’ that seeks to enthrone and ascribe all human worship to Lucifer, the false Christ, the Anointed Cherub that rebelled against YHVH eventually there in Jerusalem.

In what way? It is also the Serpent, or Lucifer that seeks to take control of the access back to Eden and prevent Humanity from returning there. Thus, Jerusalem needs to be divided and occupied. Why? In so doing, it will solidify the power, dominion and authority rather given now to Humanity to rule what Lucifer once had and lost due to his rebellion and being casting out. As it is, in the meanwhile, those in the ‘know’ have made sure that hidden in plain sight, such sacred geometry and correlations of the city outline reflects the Celestial Order. And that of especially corresponding to Orion as he is seen as the Great Deliverer, the Champion and Rescuer.

Of course, there is a double entendre as there is a thesis and antithesis to the constellation of the Christ, Jesus and Lucifer. There is a correct version established and rendered by YHVH Himself and first taught to Adam. Then there is the corrupted narration that ensued that negates such attributes. However, the true thesis is a testimony or record that the celestial storyline pertains to Jesus Christ and the Plan of Redemption of Humanity. So, Jerusalem, out all the places on Earth is why it is the most contended real estate for which the last battle on Earth will culminate there with the return of Jesus with His Saints as these Gates are at stake and will be recaptured and opened at that time to restore Paradise.
______________________ 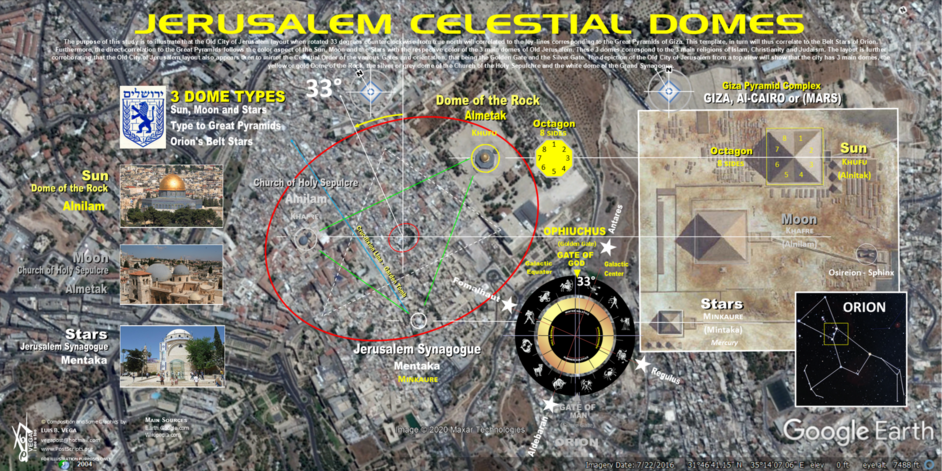 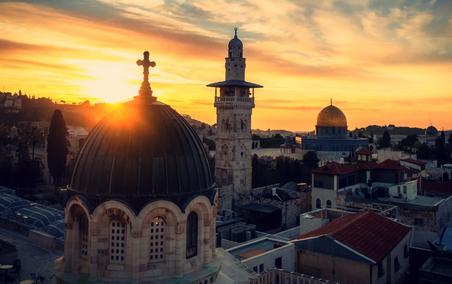