‘Do not fear, Little Flock, for it is your Father’s good pleasure to give you the Kingdom.’ -Luke 12:32

The purpose of this study is to follow-up with the prior article entitled, ‘The Creation Comet’. In that study, the context dealt with the Biblical, prophetic and esoteric nature of the Comet Atlas conjunction with the Pleiades. The study inferred how the Pleiades is a type of 7 Maidens or the Church of Christ and how the comet, named ‘Atlas’ is of the typology of the coming Strong Man. He is the Messiah, the bearer of the sins of the world put upon his shoulders. He will come as the Good Shephard of the ‘Little Flock’ 7 Star Cluster. In this study, an illustration of the Comet Atlas C/2019 Y4 will be depicted as it conjoins with the Pleiades on May 28, 2020 looking westward over the Temple Mount in Jerusalem, Israel. Comet Atlas will be over Jerusalem at the traditional ‘Pentecost’ of May 28, 2020, to then reach Perihelion with the Sun on May 31, 2020.

The ‘picture’ will be displaying the visualization of this unique event just approximately 2 hours prior to Sunset, Jerusalem time. Based on this configuration of the sky, the following observations are made. Mainly that about 2 hours just before Sunset, the angle from the Silver Gate to the Earth’s horizon will have the comet directly be at a 33-degree angle. And that, at this time and place, the Galactic Plain is horizontal to the Earth’s. Also, there will actually be 2 comets in this ‘picture’ at this time with Comet SWAN to the upper right. This comet will conjoin Mercury on true ‘Pentecost’ in July 20 based on the alternative count of Leviticus 23:16. Although it has been reported that Comet Atlas has broken up in more than 20+ pieces, it still has life because it is just so big.

The magnitude of its brightness might be diminished but it still will be able to be seen with telescopes at either Sunset towards the west and Sunrise towards the east -and depending on atmospheric conditions, etc. Due to the comet being so close to the Sun, it will be hard to see it as opposed to if it was to be seen at night in a different quadrant of the sky. Thus, based on the graphic model of the comet from the point of view of Jerusalem looking west at Sunset, there are some unusual and interesting geometry occurring and a connections with the respective Silver Gates of the Heavens to the Golden Gate of the Temple Mount. In this case, one has a ‘circuit closed’ as the celestial Silver Gate is corresponding with the terrestrial Golden Gate, its opposite. What does this mean? For one, it means that a connection is made. That there is a direct line of correspondence, ‘As Above, So Below’. It means that the energies related and released on this day and time accentuate the meaning of the conjunction.

Lastly, it connotes that at this time, the ‘Gates’ will be opened. Which one? It will be a clean inference to the celestial and heavenly one as the Golden Gate will not and cannot be open until Jesus, the Messiah return to go through them again as He did at His triumphal entry. Is the depiction of this event to suggest that the Silver Gate that leads to Heaven is about to be opened as ‘Atlas’ as the Great Shepherd of the Sheep is about to come for the ‘Little Flock’, and lead them through that Gate? It is only an inference and such an event might only be a ‘dress rehearsal’ of sort, if at least. Is this depiction just before Sunset over the corresponding Gates in Heaven and Earth aligning such a prophetic reality to occur fairly soon or within this year?

This cannot be said of the City of David, etc. Nonetheless, the world is fast approaching a point of catharsis like no other in world history. A change is upon the inhabitants of the world that will see and is seeing an Orwellian and 1984 style convergence of events that will lead to the fulfillment of the book of Revelation. Where the drastic change in dispensations, age will reflected in the opening and shutting of ‘Gates’ or ‘Portals’ on Earth as it will be in the Heavens or Sky as in the coming Rapture when the Great Shepherd of the Little Flock will come to meet the Bride of Christ in midair to then be ushered through the Gates of Heaven like a sheepfold led by a Shepherd. Is the Comet Atlas conjunction with the Pleiades announcing such an omen?
________________________ 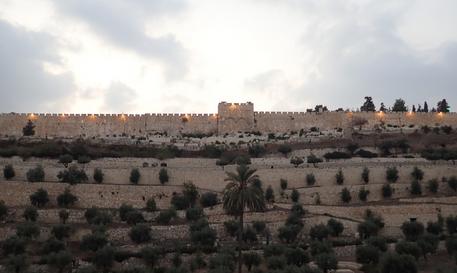