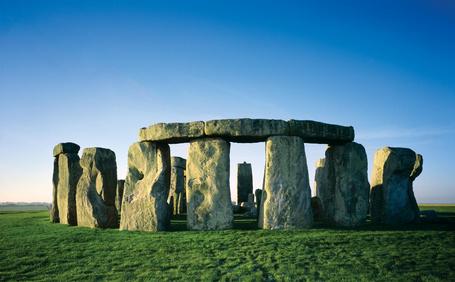 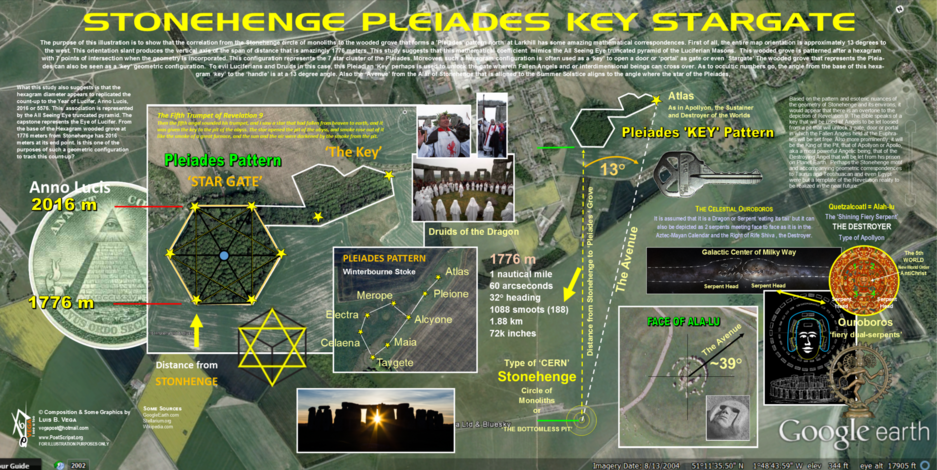 ‘Then the fifth angel sounded his trumpet, and I saw a star that had fallen from heaven to earth, and it was given the key to the pit of the abyss. The star opened the pit of the abyss, and smoke rose out of it like the smoke of a great furnace, and the sun and the air were darkened by the smoke from the pit.’ –Revelation 9:1-2

The purpose of this study is to show that the distance from the Stonehenge circle of monoliths to the wooded grove that forms a ’Pleiades’ pattern north at Larkhill has some amazing mathematical correspondences and produces an amazing esoteric motif. The entire map orientation is set to approximately 13 degrees to the west. The north-south axis from the Stonehenge circle to the Pleiades wooded grove is approximately 13 degrees from the angle pegged to the ‘Pit’ of the Stonehenge circle. The Pleiadian wooded grove is patterned after a hexagram with 7 points of intersection and when the geometry is incorporated. This configuration represents the 7-star cluster of the Pleiades. This study suggests that it configures a ‘Key’ motif. In the occult, such a hexagram configuration is often used as a ‘Key’ to open a door or ‘portal’ as gate or even ‘Stargate’.

This study suggests a parallel correlation from the wooded grove that represents the Pleiades as a ‘Key’ geometric configuration to the Stonehenge circle of monoliths that can be seen as its corresponding motif of the ‘Pit’. Does this Pleiadian ‘Key’ motif ‘unlock’ the ‘Pit’ at some point in time?  Such a correspondence is foretold in the book of Revelation chapter 9. To the evil Luciferians and Druids in this case, this Pleiadian ‘Key’ perhaps is used in a spiritual way or in some sort of strange ritualistic magic to unlock the gate wherein Fallen Angels and/or interdimensional beings crossover. As far as occultic numbers go, the angle from the base of this hexagram ‘Key’ to the ‘handle’ is at a 13-degree angle and 1776 ft in length. This angle corresponds approximately to the angle of the ‘Avenue’ that is initiated from the Altar of the Stonehenge ‘Pit’. This Avenue or sacred ley-line is precisely aligned to the Summer Solstice and to the angle where the star of the Pleiades, Atlas corresponds to the edge or tip of the ‘Key’ Pleiadian grove configuration.

This orientation slant produces the vertical axis of the span of distance that is amazingly 1776 meters. From the base of the Hexagram wooded grove at 1776 meters from Stonehenge has 2016 meters at its end point. This study suggests that this mathematical coefficient mimics the All Seeing Eye truncated pyramid of the Luciferian Masons that is tracking ‘prophetic time’. This association is represented by the All Seeing Eye truncated pyramid. The capstone represents the Eye of Lucifer. What this study suggests is that the hexagram diameter appears to replicate the count-up to the Year of Lucifer, Anno Lucis, 2016 or 5776. It is the count-up of when some are expecting their Dark Lord, Lucifer is to appear to rule the world by way and through his ‘anointed Christ’ or AntiChrist as it is believed to be by the account of the Bible.

Is this ‘Key’ and ‘Pit’ association and connection a foreshadowing of Revelation 9? Based on the pattern and esoteric nuances of the geometry of Stonehenge and its environs, it would appear that there is an overtone to the depiction of Revelation 9. Is this one of the purposes of such a geometric configuration to track this count-up? The geometric hexagram of the Pleiadian ‘Key’ can be seen or observed as a 3-deminsional cube based on its Gematria. It is a combination of 2 intersecting tetrahedrons. This sacred geometry produces a perfect cube as in a chamber.

This study thus suggests a connotation to the Ka’ba of the Muslims and from where one gets Kabbalism. Such knowledge comes in part from the forbidden esoteric and Luciferian arts acquired in Babylon that apostate Jews tagged along as a so called mystical branch of Judaism. This is the core that makes up the Synagogue of Satan that the coming Tribulation of Daniel’s 70th Week or the Time of Jacob’s Trouble will be used of YHVH to purge such idolatry from Israel. It is in essence the magic of Saturn, the Trident god of the Titans of old and the 200 Fallen Angels of Mt. Hermon that were bound and imprisoned in the ‘Pit’ awaiting the ‘Key’ to open their Bottomless Pit.

The diameter of the ‘Key’ Pleiadian motif is 1776 ft or 18 arcseconds (6-6-6) or .33 miles
From the circle ‘Pit’ of Stonehenge to the initial edge of the Pleiades wooded grove ‘Key’
1 nautical mile

This study suggests that the Stonehenge circle is a cryptic face configuration of the Aztec-Mayan Calendar.
-Quetzalcoatl = Alah-lu
-The ‘Shining Fiery One’
-Son of the Dawn

Type of Apollyon or Abaddon
Saturn, Lord of the Trident
Shiva the Destroyer of the prior 4 Worlds

The 5th Age or World to come is to be ruled by the return of this being. Perhaps such motif incorporated of a ‘key’ and ‘CERN’ circular monoliths of stone served as an ancient sort of Hadron Collider with the ritualistic dances and magic performed in the circle of stones. It is very telling that the region bordering the ‘Key’ Pleiadian wooded grove is called Strangways. Does Stonehenge represent such an ancient ‘CERN’ type of intricacy that ritualistically rehearses the ‘key’ that one day will open the Bottomless Pit from where the incarcerated Titans of Abaddon awake their awakening? As the Avenue angle from the ‘Pit’ of the Stonehenge circle of monoliths intersects the ‘star’ Atlas of the Pleiades wooded grove pattern, will it be such a being or the Angel that will be the one to turn the ‘Key’ and let loose the fallen spirits of the Titans kept in the Pit? The Bible further states that such beings will come out to engage in the celestial Angelic battles of the Last Days.

The motifs at Stonehenge, of the ‘Key’ and ‘circular pit’ speak of a coming battle as a result of this unlocking. This is alluded in Daniel and Revelation when Michael and Gabriel will engage with Lucifer and his Fallen Angels in celestial all-out war. This time is when although Lucifer’s Titan contingency is loosed and come up to help in his onslaught against YHVH’s Throne in Heaven, the true ‘Clash of the Titans’. Lucifer and his minions are to come down to Earth; forever expelled from accessing Heaven’s Court again. The loosening of his Titans from the pit will serve to decimate the Earth and its inhabitance as collateral damage and part of their judgment. The battle has been, is and will be for the ‘Birthright’ and inheritance of the Christ. It is a struggle of who gets the worship and who is LORD and who is the true Christ. The book of Revelation attests to this fact in chapter 9 as does the book of Enoch. Enoch warns that such incarcerated beings in the ‘Pit’ will have their sentence completed in the 70th generation.

By some estimates, that generation is now. This time pattern might very well synchronize with the 70-year pattern seen often in the Bible concerning Israel. Indeed, the confirming sign if Israel is the Fig Tree will be confirmed if from 1948, such an AntiChrist will arise on the 70th year. That corresponding year would be 2018. The Jewish year cycle would be 2017-18 in which a 2nd confirmation could be the 50 years from 1967 when Jerusalem and the Temple Mount were liberated from the Muslims. Could such a convergence of prophetic time point to 3rd Temple? The Temple had and will have a ‘cube’, that of the Holy of Holies. It functioned as an interdimensional space in which it had a door and a human could enter but once a year into the very presence of Divinity, that of the heavenly presence of YHVH, the Creator.

This ‘cube’ is where also Celestial Angels traversed in and out of YHVH’s Throne as in the case of John the Baptist’s father. It was an Angle at the right side of the Altar of Incense that proclaimed the forerunner to Jesus as the Lamb to be sacrifice and make atonement for the sins of Humanity by His blood. It will be this ‘cube’ in which the AntiChrist will seek to inter-dimensionally transpose himself in the very Throne of YHVH through this Gate. By some interpretations of the Bible, it will be in this Chamber, this double tetrahedron where Lucifer, possessing the AntiChrist will stand in the flesh, mimicking Jesus’ incarnation. It will be in the Holy of Holies where Lucifer by way of his AntiChrist then proceeds to sit in the Mercy Seat of the Ark of the Covenant.

The Key and the Pit
The Bible speaks of a Key that will be used concerning Fallen Angels to be let loosed upon the Earth from a Bottomless Pit during the 7-year Tribulation. This timeframe is projected to occur just before Jesus’ return and part of the wrath elements used to judge Lucifer, his False Prophet, AntiChrist and the Christ-rejecting world. In one aspect of the correlation to Stonehenge, it will be a mighty Angel that will be given this ‘Key’ that will unlock a gate, door or portal of the ‘Pit’ in which the Fallen Angles held at the Euphrates will be set free. Also more prominently, it will be the King of the Pit, that of Apollyon or Apollo, a powerful Angelic being. He is attributed to being the Destroying Angel that will be let from his prison on planet Earth to wreak havoc upon the world.

Perhaps the Stonehenge motifs and accompanying geometric correspondences to Taurus and Teotihuacan and even Egypt were but a template of the Revelation reality to be realized during the End of Days and part of the Wrath of the Lamb to come. This study suggests that perhaps the ancient Druids of the Dragon, the witches and warlocks in league with the demonic spirits and Fallen Angel beings anticipate this ‘Key’ for the unlocking of their fellow brethren from the Bottomless Pit. It is assumed that it is a Dragon or Serpent ‘eating its tail’ called the Ouroboros. However it can also be depicted as 2 serpents meeting face to face as it is in the Aztec-Mayan Calendar and the Right of Rife Shiva, the Destroyer. Both the Aztec-Mayan calendar and the right of fire in which Shiva is encircles depict the ‘fiery dual-serpents’. On many levels such motifs hint at the dimensions of the Milky Way galaxy and quadrants of prior worlds.

The book of Revelation gives some insight as to a possible innuendo of there being a cosmic ‘Red Dragon’ that is Lucifer. This Angelic Cherub, the Anointed at that or ‘christ’ drew with his ‘tail’ 33.3333 part of the Angles or ‘stars’ to his the cause of his insurrection against YHVH and the true Anointed Christ, Jesus. It is the serpent that was cursed in the Garden as Lucifer embodied to take dominion away from the crown of YHVH’s creation. For such a reason, Jesus explains to the Teacher of Israel, Nicodemus that as the Bronze Serpent was lifted up on a pole for all those that would see in faith be cured of the venomous bite of death, so too Jesus was to be made a ‘curse’ as a serpent to cure the sting of death, that is sin and destroy Death by Death. Now all those that look to Jesus in faith are cured of the sin nature. More so, such are bestowed Eternal Life and inheritance unmerited. Is the year 2016 when an event or milestone will be reached in terms of who and/or when the AntiChrist in Lucifer’s coming power will be realized?