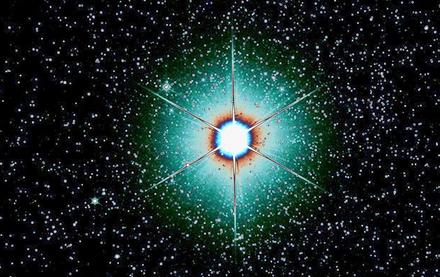 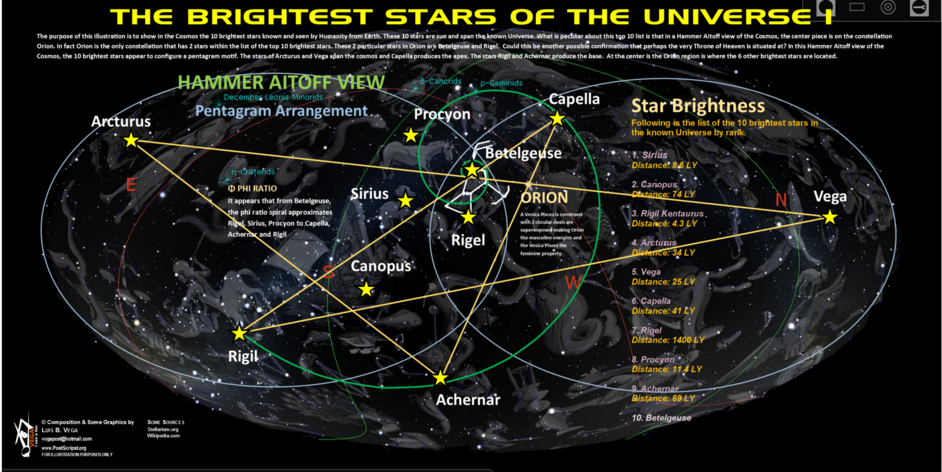 #170:
​THE BRIGHTEST STARS
TOP 10 LIST OF THE COSMOS
Dimensions of the Star Markers of the Universe

‘He heals the brokenhearted and binds up their wounds. He counts the number of the Stars; He gives names to all of them. Great is YHVH and abundant in strength; His understanding is infinite.’ –Psalm 147:3-4

The purpose of this study is to show in the Cosmos the 10 brightest stars known and seen by Humanity from Earth. These 10 stars are Suns and span the known Universe. What is peculiar about this top 10 list is that in a Hammer Aitoff view of the Cosmos, the center piece is on the constellation Orion. In fact, Orion is the only constellation that has 2 stars within the list of the top 10 brightest stars. These 2 particular stars in Orion are Betelgeuse and Rigel.  Could this be another possible confirmation that perhaps the very Throne of Heaven is situated at?

In this Hammer Aitoff view of the Cosmos, the 10 brightest stars appear to configure a pentagram motif. The stars of Arcturus and Vega span the cosmos and Capella produces the apex. The stars Rigil and Achernar produce the base. At the center is the Orion region where the 6 other brightest stars are located. One interesting observation is that from the star Capella to the star Rigil, there is an apparent phi ratio to Betelgeuse. A 2ND illustration will show the 10 brightest stars in the known Universe set to the Cylinder view based on software models from Stellarium.

What is very unique about this rendition is that the stars configure an apparent rectangle with respective stars at each corner, Arcturus, Vega, Rigil and Achernar. What is more pronounced is that at the center is this Universe is Orion with the remaining 6 brightest starts. Moreover, these 6 stars configure an apparent ’cross’ motif. One interesting observation is that from the star Capella to the star Canopus, there is an apparent phi ratio to Sirius. The stars that configure this ’cross’ are Cappella at the top, Canopus at the bottom and Procyon and Rigel as the cross beam.

The center star is Betelgeuse. It seems that the Creator has ’accented’ the Universe with identifiable star markers that emphases this Orion region. Does this substantiate the region where possibly the Throne of YHVH is situated, perhaps in another dimension? These mathematical relationships between the various stars are just a glimpse of the amazing intricacies involved in the Creator composing the Cosmos. Psalm 147 states that not only does YHVH has a name for each star in the Cosmos but has positioned them exactly where they belong. This divine principle is also understood in how Jesus Christ is also fashioning the ‘spiritual temple’ of His Bride with ‘Living Stones’. Jesus knows each by name and exactly where each member belongs.

The following is the list of the 10 brightest stars in the known Universe.

1. Sirius
Sirius, also known as the Dog Star, is the brightest star in the sky. Its name comes from the Greek word for scorching. Distance: 8.6 Light Years

2. Canopus
Named either for an ancient city in northern Egypt or the helmsman for Menelaus, Canopus is the second brightest star in the sky. Distance: 74 Light Years

5. Vega
Vega is the fifth brightest star in the sky. Its name comes from the Arabic for the swooping eagle. Vega is about 25 light-years from Earth. Distance: 25 Light Years

6. Capella
The sixth brightest star in the sky, Capella's name is from the Latin for little she-goat. Capella is a yellow giant star, like our own sun, but much larger. Distance: 41 Light Years

7. Rigel
The seventh brightest star in the sky, Rigel's name is from the Arabic for foot, indicating its place in the constellation Orion. It is a blue supergiant. Distance: 1400 Light Years

8. Procyon
Procyon is the eighth brightest star night sky. It is a yellow-white star and at 11.4 light years, one of the closer stars to Earth. Distance: 11.4 Light Years

9. Achernar
The ninth brightest star night sky is Achernar. It is a bluish-white white supergiant star that is about 69 light years from Earth. Distance: 69 Light Years