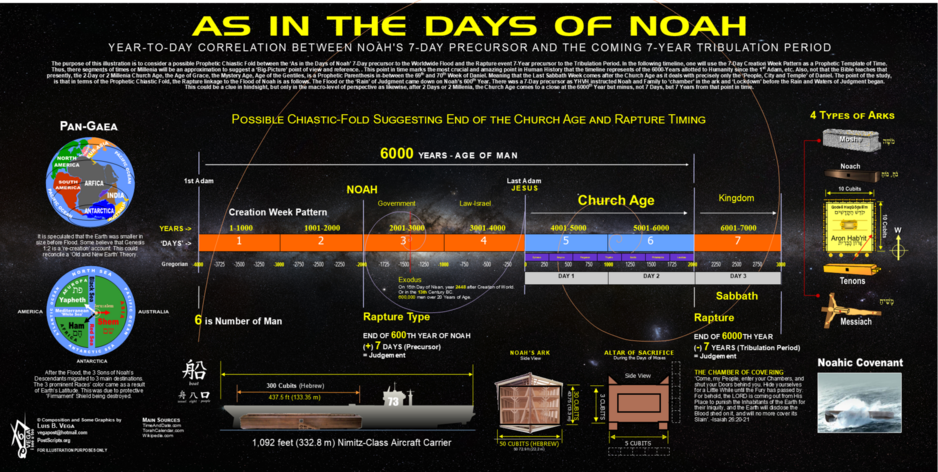 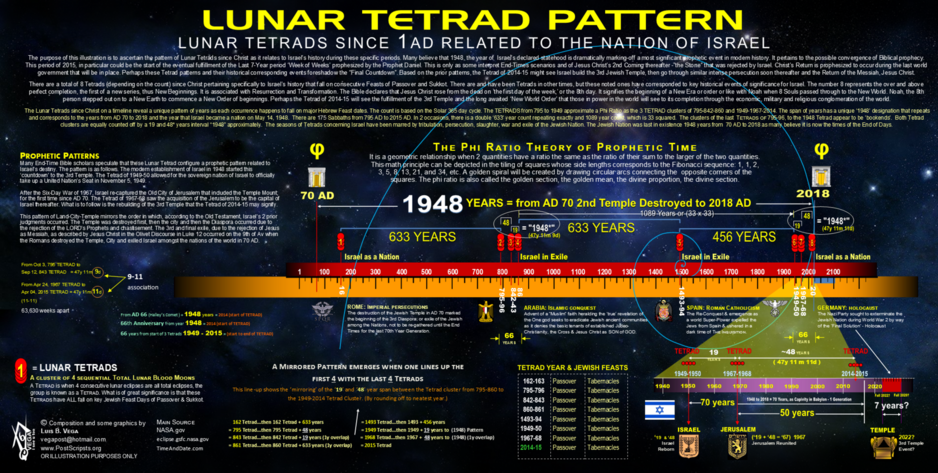 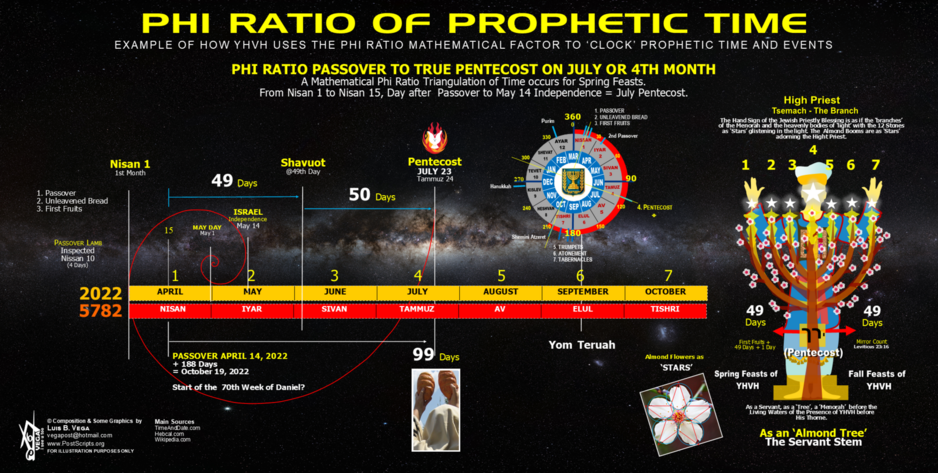 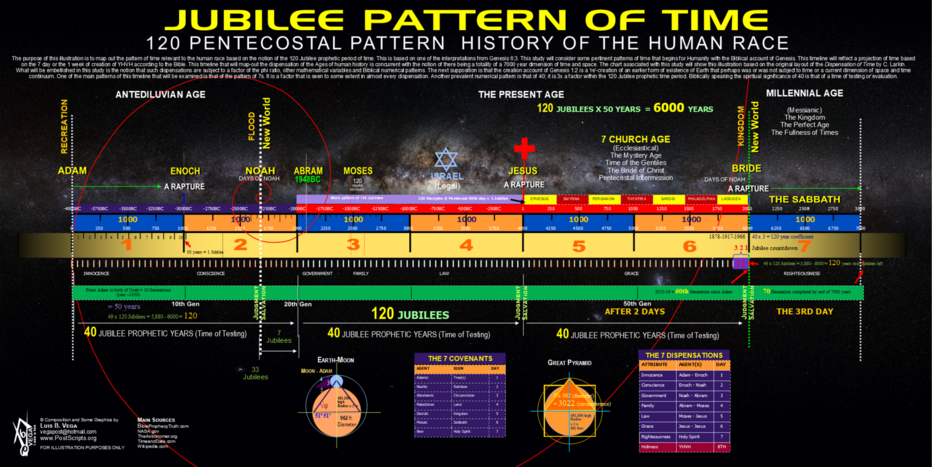 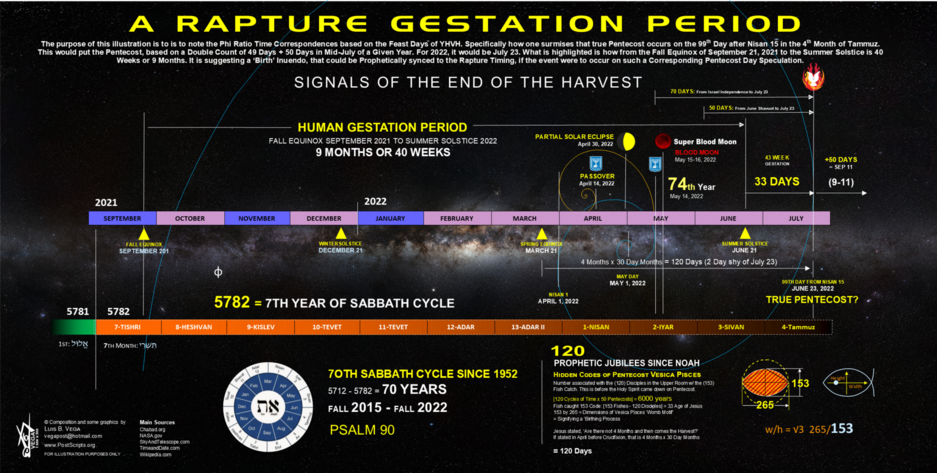 ​#648:
PHI RATIO CODE
THE ‘SIGNATURE OF GOD’
Why Prophetic Time is based on Phi Ratio

‘But do not forget this 1 thing, Dear Friends: With the LORD 1 Day is like 1000 Years, and 1000 Years are like 1 Day. The Lord is not slow in keeping His Promise, as some understand Slowness. Instead He is Patient with you, not wanting anyone to Perish, but everyone to come to Repentance’. -2 Peter 3:8-9

The purpose of this study is to present the Theory and Hypothesis that Time, as Humanity knows it and understands it and ‘Clocks’ it, is patterned after the Phi Ratio Phenomena. Moreover, that Biblical Prophecy occurs in such Proportions of Time. And that when applying the Phi Spiral, a Triangulation will occur that can be used to ‘Predict’ a Terminating Event or Prophetic Time Marker.

Another Key Proportion is the Creation of Adam. As one positions the Focal Point of the Phi Spiral to correspond to Noah and the Flood, then the Phi Spiral’s End Point will correspond to when Approximately, Jesus is to return and start the Millennial Kingdom.

This Phi Ratio can then be used in other Biblical Historical Events that have occurred and appear to validate this Theory. To go any further, one must touch upon the Notion of what is ‘Time’. Where did it come from and what is its meaning and confines? How is it Tracked or Measured? Will Time End? All those subjects are each in themselves a topic to consider further. For the purposes of this study, one will presume the Biblical World View. And that is? According to the Bible, Time began with the Creator, YHVH. Time is a Dimension. These Notions are taken from the Book of Genesis.

Definitions and Properties
It states that ‘In the Beginning’…etc. This is where, from a Point of Singularity where there was no Time, YHVH Spoke Creation into Existence, i.e., Time. And it will have an End. It was through the Logos or the Word, i.e., Jesus that ‘Existence’ resonated through Frequencies that reverberated to not only create Time, but Space and Matter. This is why those who believe that there is ‘No Space’ or Dark Matter even, are wrong. If there is no Space and Matter, then there can be no Time, etc.

This Point of Divine Singularity is what one wishes to highlight in this way. One’s Hypothesis is that in so doing, YHVH’s Creation took on or was made with a certain repeating and fixed Mathematical Sequence of Numbers; the Phi Ratio. After all, Mathematics is known and accepted to be the Universal Language. It is through Mathematics that one can examine and see such Divine Patterns of Biblical Prophecy.

And what Pattern is that? The Phi Ratio Pattern applied to End Times. It is also called the Golden Ratio or Mean and is based on the Mathematical Concept of what is now known as the Fibonacci Sequence. It is a Number Order. And? One sees this Divine Number Order that is thus called the ‘Signature of GOD’ in all Created Things. It is found in Nature, Plants, Animals. It is found in the Ocean with Fish and other Marine Life. It is found in how the Galaxies are swirling as do Hurricanes, etc.

It is seen in the Proportion of the Human Body. Artists and Architects have used this Mathematical Ratio to draw and build the most Beautiful and Magnificent Works ever made by Mankind, etc. And the point? One theorizes that Time itself, especially Prophetic Time, as far as when Significant Biblical Events occur, are and will, are Proportioned to this Divine Signature of GOD, or YHVH Pattern. What is the Phi Ratio, exactly? It is a Number. It has a Greek Letter of Phi ascribed to it.

The following will be pertinent to its Definition and Properties. Thereafter, one will extrapolate how it is found in Prophecy. To what end, one Postulates that given 2 Data Points of Human History, can determine the 3rd Aspect of the Triangulation, based on this Theory. Or in other words, one can relatively predict a Major and Significant Corresponding Event to occur based on 2 Dates in question that are being considered. The Phi Ratio is simply an Irrational Number like Pi (3.14159265358979… ). It has many unusual Mathematical Properties. Unlike Pi, which is a Transcendental Number, Phi is the Solution to a Quadratic Equation.

Phi is the basis for the Golden Ratio, Section or Mean. It is therefore a Matter of Proportions. Thus ‘Dispensations of Prophetic Time. The Greeks said it was ‘Dividing a Line in the extreme and Mean Ratio’. In the Renaissance, Artists called it the ‘Divine Proportion’. It is also called the Golden Section and the Golden Mean, etc. Phi, like Pi, is a Ratio defined by a Geometric Construction. Just as Pi, the Phi is the Ratio of the Circumference of a Circle to its Diameter. Phi is simply the Ratio of the Line Segments that results when the line is divided by a Proportion of it that is constant throughout. The Phi Ratio Proportion appears in the following aspects as noted.

What one strongly suggests, is that Biblical Prophecy is also subject to this Mathematical and Divine Law of Proportions.

The Proportion Ratio of 2.5 to 1.5 is 1.666…, which is as close to phi (1.618 …). The point is that the Ark of the Covenant was constructed using the Golden Section, or the Divine Proportion. This Ratio is also the same as 5 to 3, the Numbers that constitute the Fibonacci Series. Is this Numerical Divine Pattern also found in the Bible? Yes. In Exodus 27:1-2, the Altar of Sacrifice that YHVH commands Moses to build is based on a variation of the same 5 by 3 Mathematical Proportion.

‘Build an Altar of Acacia Wood, 3 Cubits high; it is to be Square, 5 Cubits long and 5 Cubits wide’.

A Cubit is the Measure from the Tip of the Hand to the Elbow of an Average Man. Are there more Pieces of Evidence found in the Bible to have this Divine ‘Signature of GOD’? Yes. Consider Noah’s Ark. It also used the Fibonacci Numbers in its Dimensions. This is found in the Flood Account of Genesis 6:15. It is where due to the Wickedness and Perversion of Humanity, YHVH decided to wipe-out all of Mankind, except those that sought YHVH. It was only Noah and his Family, unfortunately. YHVH commanded Noah to build an Ark with the following Mathematical Proportions.

‘And this is the fashion which thou shalt make it of: The Length of the Ark shall be 300 Cubits, the Breadth of it 50 Cubits, and the Height of it 30 Cubits’.

Thus, the End of the Ark, at 50 by 30 Cubits, was also in the same Phi Ratio Proportion as the Ark of the Covenant and Altar of Sacrifice, having a 5 to 3, or 1.666… correspondence. As one can assess, the Number 1.666 has that ‘666’ Fractal in it. Is there also any Evidence of finding the ‘Mark of the Beast’ Number having the same Phi Ratio Correlation? Yes. The Number 666 is related to Phi. Where? In Revelation 13:18.
‘This calls for Wisdom. If Anyone has Insight, let him Calculate the Number of the Beast, for it is a Man’s Number. His Number is 666’.

To be even more Mathematically Specific, the Trigo-No-Metric Relationship of Sine 666º to the Phi Ratio is based on the Isosceles Triangle. How so? It will have a Base of Phi and Sides of 1. When this Triangle is enclosed in a Circle with a Radius of 1, the Lower Line will have an Angle of 306º on the 1st Rotation. It will have 666º on the 2nd Rotation. That will have then, a Sine equal to one-half the Negative Phi Ratio.

What this demonstrates is that the Phi Ratio also has Mathematical Unity as Phi can be divided into Positive and Negative Aspects. The Researcher asks if it could be analogous perhaps to the Relationship between Light and Darkness or Good and Evil, etc. In addition, 666 Degrees is 54 Degrees short of the complete 2nd Circle.

And when dividing the 360 Degrees of a Circle by 54 Degrees, the result will be 6.66… The other side of a 54 Degree Angle in a Right Angle is 36 Degrees and 36 divided by 54 is .666. Thus, to reiterate, in Mathematics, 2 Quantities are in the Golden Ratio if their Ratio is the same as the Ratio of their Sum to the larger of the 2 Quantities.

The Fibonacci Spiral, also known as Golden Spiral, has an association with the Golden Mean, and also based on the Fibonacci Sequence. In Logarithm, it means a Logarithmic Spiral which gets wider by 1 Factor of ɸ after making a Quarter Turn. A Fibonacci Spiral having an initial Radius of 1, has a Polar Equation similar to that of other logarithmic Spirals. If it could be 3-Dimensionalized, the Phi Ratio Spiral would construe a Vortex or ‘Tunnels’ effect, a ‘Door’ or Portal, etc. As stated, the Golden Phi or Number is 1.69, and the Golden Ratio is also 1:1.69. This simply means that each of the Curves on the Fibonacci Spiral will end up being 1.69 Times bigger than the previous Curve.

For example, the Fibonacci Spiral is used to forecast Financial Market Trend. It is used as a Technical Analysis Tool that helps to identify important Price and Time Targets. Nonetheless, all that has been presented, as a Mathematical Foundation is to thus assert, that not only are the Ark of the Covenant, Noah’s Ark, the Altar of Sacrifice based on the Phi Ratio, but so is Time, Prophetic Time. The following is the layout of the Phi Ratio concerning the Babylonian Exile and Return.

The Template of Time and how it is Measured or ‘Clocked’ has been given and defined by YHVH since Genesis. How so? The Prophetic Sequence of these Numbers can be defined by what is termed the Recurrence Relation. YHVH created Time and marked it-out in Sequences of 7’s. The Creation Week was a 7 Day Eternal Pattern of Time.

The 7th Day was the Sabbath. Then every 7 Sabbaths were Segments of a Greater Time Marker, Prophetic Time, that being 7 x 7 = 49 Days. YHVH then commanded to add 1 Day, that being the 50th Day to the Time Count. Then, for example as YHVH restricted Time by a Factor of 120, the 7 Year Sabbath Cycles + 1 Day would equal to 6000 Years when multiplied.

Each Segment or Sabbath Cycle of 7 Years is how YHVH ‘Clocked’ Time and how one Theorizes that Biblical Prophecy is based upon. Ultimately, the purpose of Prophecy is to Testify of Jesus. This is what the Angel told the Apostle John in Revelation 19:10. The various Charts presented in the End Notes will visually demonstrate this Phi Ratio Spiral Proportion that is pertinent to Biblical Prophecy.

Such examples will be when the Tetrad Blood Moons occurred. Other Prophetic Proportions deal with the Abomination of Desolations, Israel’s Independence Day and when do the Feasts of YHVH occur and how they are factors-in when Key Prophetic Events thus have occurred, are occurring and will occur, in one’s Assessment etc.
___________________

1. Theory: Assumptions used to predict a Result.
2. Hypothesis: A Tentative Explanation of an Observation that can be Tested.

Examples of Charts that show a Phi Ratio of Time.

Phi in the Bible
https://www.goldennumber.net/bible/ 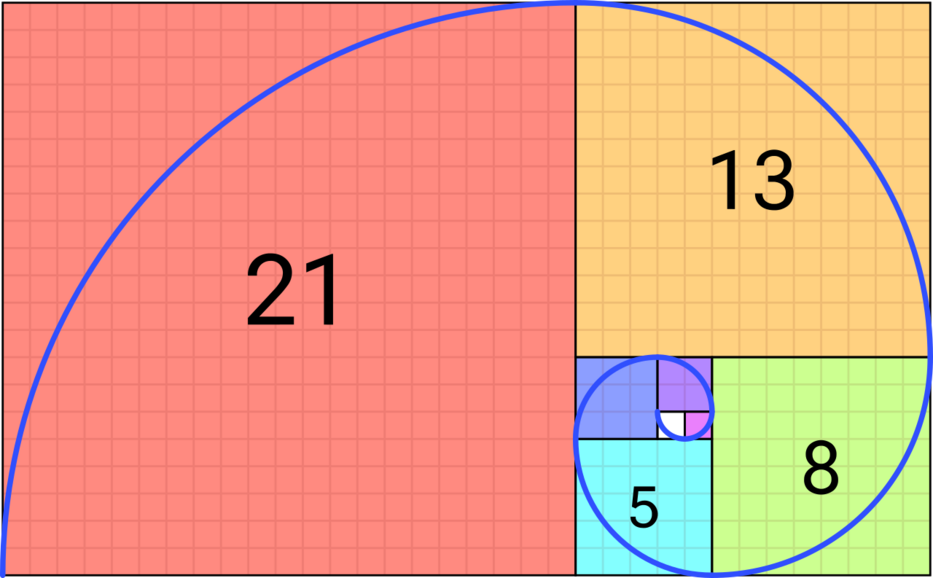