The purpose of this study is to illustrate that the 3 series of 4 Blood Moon Tetrads alternated in the Signs of Virgo and Pisces turned ‘blood’ red on each occasion as it appeared ‘astronomically’ to be birthed out of the womb of Virgo. These had overtones of the Great Wonder of the Revelation 12 Virgo Sign. In that depiction, the Maiden is about to deliver the Man-Child but is whisked-away to the Throne of YHVH as the Maiden is led to safety in the Wilderness for a time of ‘laboring’. Out of all the 12 Signs of the Mazzaroth or the Zodiac, Virgo is the singular one that is feminine and ‘delivers’ as in birth the planets that traverse its quadrant and within its ‘womb’ area as it is anthropomorphized. This study will illustrate the entire 3 set Tetrad series of the 4 consecutive Blood Moons that occurred on YHVH’s Feast days of Passover and Sukkot. In the 12 Blood Moon series since 1949, what was amazing was that in 3 occurrences, 1 Blood Moon was ‘birthed’ out of Virgo’s ‘womb’ as the eclipse was initiated.

The start of the 3 series of the 4 Blood Moon Tetrads series 1949-50, 1967-68, 2014-15 occurred almost 1 year after Israel’s Declaration of Independence on May 14, 1948. This was exactly on the 333rd day. Was this prophetically significant? The other numerical factor is 500 days. This is the day count from the UN Partition Plan of November 29, 1947 to when the first Tetrad starting on April 12, 1949 occurred. The numbers and where the Blood Moon occurred might substantiate this claim that witnessed the rebirth of Israel as the prophetic Fig Tree. What was amazing to consider was that the Moon turned ‘blood’ red as it crossed over the astronomical threshold or ‘line’ of the ‘womb’ of Virgo. This same ‘birthing’ of the Blood Moon by Virgo on the Feast of YHVH, Passover in particular occurred again in the 3rd Blood Moon of the 1967-68 Tetrad and the 1st Blood Moon of the 2014-15.

In all, every series of the 3 sets of Tetrads had the 1st and 3rd Blood Moon ‘birthed’ out of Virgo. What was amazing was that the Moon turned to ‘blood’ red as it approximated the Feast of Passover. Another unique observation was that for the 1st Blood Moons of the 1967-68 and the 2014-15 Tetrads, the planet Mars was also in retrograde within the ‘womb’ of Virgo. This would appear as if war was about to break loose. Indeed, a state of war did occur in the 1st 2 sets or series of Tetrads, both the 1949-50 and the 1967-68 ones saw war before and then during the Tetrad sequence. The question remains, is the Tetrad Template Theory viable in that it suggests based on the patterns that an ‘after’ event such as a war most likely will occur? Moreover, does the 707-day count related to the 1st event and Tetrad of 1949-50 give the segment of how long after the Tetrad of 2014-15 the ‘event’ that could be prophetic and related to the 3rd Temple come into play?

Prophetic Countdowns
What is very interesting to speculate is what if the same 500-day count from Israel’s birth to the 1st Blood Moon of the 1949-50 series is also applied to the end of the 2014-15 Tetrad series? What would be that date, and would that date have any possible prophetic significance? The following are the day count for the 500 and 707 day patterns. The 707 days are derived from the UN Partition Plan of November 29, 1947 to the day Israel was fully admitted as a UN Member State in November 5, 1949.

If one then adds 500 days to the last Blood Moon of the 2014-15 Tetrad series, the date from September 28, 2016 will be February 7, 2017. If this time frame will be of any significance, that remains to be seen. The following is a graph, not to scale showing the possible ‘bookend’ 707 day counts of the before and after Blood Moon series of Tetrads, from 1949 to 2015. This is not to predict any particular occurrence as many things occur during a given day, much less ‘prophetic’ things. If something does happen that seems ‘prophetic’ enough that will remain to be see and ascertained by the End of Days community.

This timeline is fascinating as it appears to be involving the whole cosmology of the Blood Moon Tetrads that from the UN Partition Plan was initiated on November 29, 1947 appears to be prophetic in the following manner. If one adds the day counts listed below, the converging date is when the triple Tetrad series starts from 1949. Amazingly also these Blood Moon ‘birthing’ events in Virgo appear to be linked to the Great Sign of Virgo giving ‘birth’ to the Man-Child of Revelation 12.

To reiterate, what was amazing to consider about the triad of Tetrads since 1949 was that in 1 instance, the Moon turned ‘blood’ red as it crossed over the astronomical threshold or ‘line’ of the ‘womb’ of Virgo. This same ‘birthing’ of the Blood Moon by Virgo on the Feast of YHVH, Passover in particular occurred again in the 3rd Blood Moon of the 1967-68 Tetrad and the 1st Blood Moon of the 2014-15. In all, every series of the 3 sets of Tetrads had the 1st and 3rd Blood Moon ‘birthed’ out of Virgo. What was amazing was that the Moon turned to ‘blood’ red as it approximated the Feast of Passover. The following is the complete series of the 3 sets of 4 consecutive Blood Moon Tetrads.

Many people believe that the modern birth of the State of Israel is the fulfilment of the Parable of the Fig Tree as interpreted by Jesus Christ Himself. Other dispute this claim and spiritualize who and what ‘Israel’ is today, many replaced by the ‘Church’, the Body of Christ. Granted, theologically, there is a ‘Spiritual Israel’. It is more as ‘Catholic’ is used to denote ‘universal’. As such, if the modern State of Israel is not the prophetic fulfillment of the Fig Tree, then there are just too many prophetic nuances in terms of day counts and astronomical synchronization of events to dismiss them. Such ‘birthing’ of the Blood Moons of the Tetrads on each occasion in Virgo echoes and foreshadows the Great Sign of Virgo with its ‘birthing’ in Revelation 12 of the Man-Child.

To some, this is alluding to the possible Rapture of the Bride of Christ. To others it is the prior visionary accounts of Christ’s ‘story’ in abbreviated fashion. Many believe the actual account of the Rapture of the Bride of Christ occurred chronologically in chapter 4 of the book of Revelation. The Great Sign of Virgo is a sort of ‘intermission’ and synopsis of a prophetic account that appears to cast it prophetic shadow in the past, the present and the future. What did and does the ‘birthing’ of the Blood Moons of the Tetrad series since 1949 convey? Perhaps Christ is trying to emphatically drive the point that a ‘birthing’ process is currently occurring and/or needed. Jesus did say to the Teacher of Israel, Nicodemus, ‘you must be born again’. Where these Blood Moon ‘birthed’ in Virgo a ‘Prophetic Sign’ that a birthing is about to occur? Of what? The Bride? Of Israel? Of the AntiChrist? Perhaps all of the above.

The Birthing Process
Nonetheless, to have 333 days exactly from Israel’s ‘birth’ or 500 days or even 25,500 days out from the UN Partition Plan to coincide ‘accidently’ to the Great Sign of Virgo that depicts the motif of Israel’s birth and subsequent ‘labor pains’ is beyond reason to have it not be so. It appeared that the triple Tetrad series had within its DNA a hidden code of ‘birthings’ of the Blood Moons. This study only seeks to possibly associate such a motif of the ‘birthing’ process and link it up with the Great Virgo Sign of Revelation 12. It does appear that perhaps such were a countdown of this amazing astronomical event that centers on the personage of the Messiah, Christ Jesus.

The patterns perhaps are part of a countdown subject to that Tetrad in proximity that occurred before, during and thus will occur after the Blood Moons within 2 years. Also each Tetrad was subject to a restoration concerning the Covenant People of YHVH based on the Olivet Discourse. Before the Tetrad of 1949-50 saw the establishment of the State of Israel ‘birthed’. During the Tetrad of 1967-68, the Jews saw the recapture of Jerusalem to include the Temple Mount on which the Temples of YHVH stood.

Thus this study does agree that the May 14, 1948 and the June 7, 1967 where prophetic and part of a 3 component countdown accented by the Blood Moon Tetrads. It was in 1947 that the UN passed the resolution to partition the land and carved out a nation for the Jewish and Muslim peoples. The partition also included a State for the Muslims which they rejected it as they wanted it all and to have no nation state for the Jewish people. From the year 1947, the Jewish people will see the 70th year anniversary also in 2017 or 5777; specifically, from the 1948 Declaration of Independence will encompass the year 2017-18.

Perhaps the end of Tetrad Template is signaling the soon start of the completion of the 70 Weeks of Years concerning Daniel’s prophecy for ‘His People’. It echoes the 70 years of captivity to have bene completed in Babylon and the year the 2nd Temple was destroyed. The total span of time of this Tetrad Template from 1949 to 2015 was exactly 66 years, 5 months, 16 days. It is from April 12, 1949 to September 28, 2015 which equals also 24,275 days. The average length of time for each set of 4 Blood Moons is approximately 18 months or a 6-6-6 code.

What makes these unique is that the lunar eclipses not only occurred on the Feast Days of YHVH, those being Passover and Sukkot, but they also alternated in the Signs of the Cosmos, Virgo and Pisces. These 2 Signs are the most profound in terms of Eschatology and prophetic motifs representing the Bride of Christ and the Church Age Royal Commission to be ‘Fishers of Men’. Did the 3-fold Tetrad series signal the end of the Church Age and the soon coming 3rd Temple thereafter a similar time of war as it was in the prior 2 sets of Tetrads?

Did the ‘birthing’ of the Passover Blood Moon of the 3 Tetrads in Virgo echo the Great Sign of Virgo in 2017 what appears to synchronize with the 70-year anniversary of Israel’s UN Partition Plan and subsequent 50-year Jubilee of the liberation of the Temple Mount? All this is still to be realized and understood, but one thing is for sure, this present Last Generation since the ‘birth’ of Israel is seeing the Signs in the Sun, Moon and the Stars. And how the recent 3 sets of 4 Blood Moons in consecutive appearance had 1 Blood Moon ‘birthed’ in Virgo that have matched the geo-political bench-markers of Israel’s history.
_________________________ 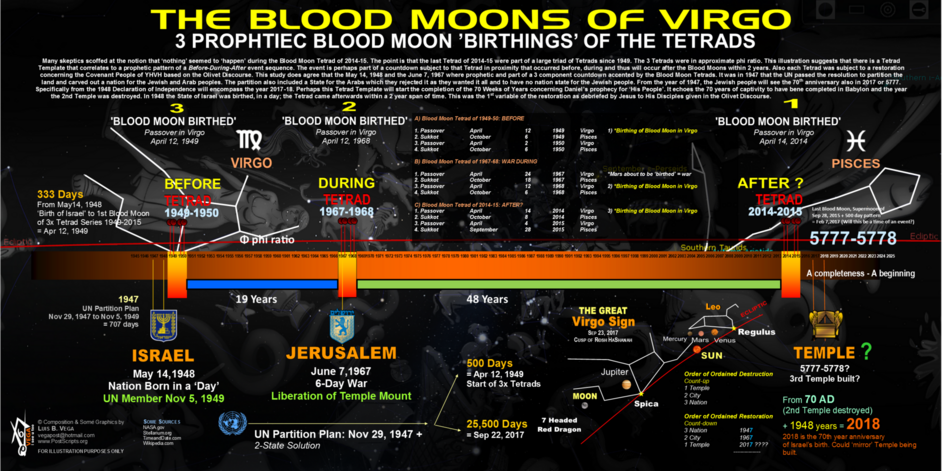 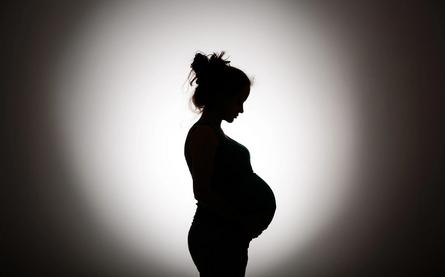