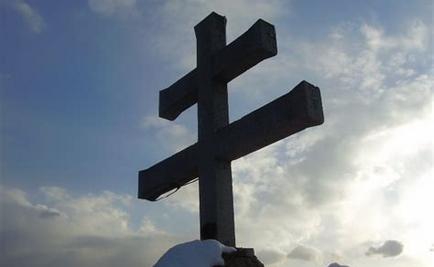 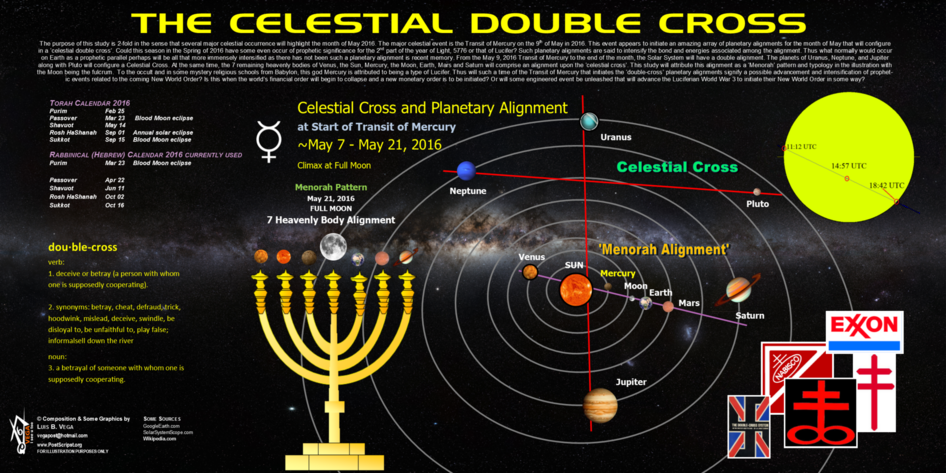 The purpose of this study is 2-fold in the sense that several major celestial occurrence will highlight the month of May 2016. The major celestial event is the Transit of Mercury on the 9th of May in 2016. This event appears to initiate an amazing array of planetary alignments for the month of May that will configure in a ‘celestial double cross’. Could this season in the Spring of 2016 have some even occur of prophetic significance for the 2nd part of the year of Light, 5776 or that of Lucifer?

Such planetary alignments are said to intensify the bond and energies associated among the alignment. Thus what normally would occur on Earth as a prophetic parallel perhaps will be all that more immensely intensified as there has not been such a planetary alignment is recent memory. From the May 9, 2016 Transit of Mercury to the end of the month, the Solar System will have a double alignment. The planets of Uranus, Neptune, and Jupiter along with Pluto will configure a Celestial Cross. At the same time, the 7 remaining heavenly bodies of Venus, the Sun, Mercury, the Moon, Earth, Mars and Saturn will comprise an alignment upon the ‘celestial cross’. This study will attribute this alignment as a ‘Menorah’ pattern and typology in the illustration with the Moon being the fulcrum.

Will something very significant or prophetic occur from May onward pertaining to the Church of Jesus Christ? Another very fascinating aspect of this Transit is that it is a dual one as Venus ‘transits’ across the Sun on the backside. This Transit of Mercury takes place in-between Aries and the Pleiades. As to the Transit of Mercury, the planet Mercury has the fastest orbital duration around the Sun of all the known planets in the Solar System with only 88 days. This means that at least 3 times a year, the planet will pass in-between the Sun and the Earth. However, the orbit of Mercury is such that a direct alignment is rather rare as it occurs about twice in a given decade. This Transit of Mercury can only occur on the months of May or November as that is when all the heavenly bodies involved synchronize to the same possible point to produce this transit of Mercury across the Sun from Earth’s perspective.

To the occult and in some mystery religious schools from Babylon, this god Mercury is attributed to being a type of Lucifer. Thus will such a time of the Transit of Mercury that initiates the ‘double-cross’ planetary alignments signify a possible advancement and intensification of prophetic events related to the coming New World Order? Is this when the world’s financial order will begin to collapse and a new monetary order is to be initiated? Or will some engineered event be unleashed that will advance the Luciferian World War 3 to initiate their New World Order in some way?

Of note, based on varied calendar counts, the Christian Pentecost will be celebrated on May 15, 6 days after the transit but on the Hebrew calendar Pentecost is on June 11th, some 80 days later. This Transit of Mercury occurs in-between the constellation of Aries the Ram and the Pleiades of Taurus. The following are the dates in which the prior and future Transits of Mercury occurred and will. The Jewish observance of Pentecost or Shavuot on June 11th will be exactly in-between the total solar eclipse of March 9, 2016 and the Blood Moon of September 15, 2016 with 66 days each span of time from Pentecost. The Transit of Mercury will be in approximate phi ratio to the Spring Equinox and the Jewish observance of Shavuot or Pentecost starting at sunset.

The point is that such celestial events are a continuation of the prophetic Signs in the Sun, Moon and the Stars that are painting a picture of what the LORD is accenting in terms of possible prophetic implications that are to manifest on Earth as they are in the Heavens. The following section will be discussing the prophetic significance of the constellation of Aries as taught by E.W. Bullinger. This middle section of the Mazzaroth began with the Goat dying as a sacrifice and it ends with the Lamb living again, ‘as it had been slain.’ The goat had the tail of a fish, indicating that his persona had a dual nature, both GOD and Man. On May 9th the Transit of Mercury occurs in the Ecliptic in-between Aries and the Pleiades as mentioned. Cosmologically this Aries motif is also tied to the Passover lambs as the Sun enters the Sign of Aries on the 14th day of the Jewish month of Nissan. It was at this time that Jesus was sacrifices as the ‘Lamb of YHVH’.

According to the research of Bullinger the Sign of Aries had occurred around the time of the Spring Equinox as in the times of Exodus but due to the Precession of the Equinoxes, the Sun has now been marked on the 14th of Nissan. He claims that on the very year of the crucifixion, the Sun stood at the very star, El Nath, which signified the Pierced One and the bruised one. This depiction was echoing the conditions of the Proto-Evangelium in that the Seed of the Woman, the Christ would be bruised or wounded but not unto eternal death for Jesus resurrected on the 3rd Day as given by the Sign of Jonah. Thus this ‘galactic sacrificial cross’ rendition in the Galactic Line is a possible depiction of the possible Resurrection and Rapture of the Saints that are to follow in the order of the LORD.

It is after the sacrifice of the ‘victim’ Lupus or the Wolf; in this case the Lamb of YHVH, Jesus the overarching motifs are Virgo led by Leo. This is a depiction of the Church Age; the Bride of Christ being led by the Lion King. On the Galactic Line, the Church is depicted as Argo, the boat full of the Pilgrims that is led by Sirius and Orion, the Good Shephard. This echoes the parable of Jesus that He gave that the Good Shephard lays down his life for the sheep and that the Shephard is the ‘Gate’ and will lead the sheep through a ‘gate’ one day into Glory.  It is a type of an overcoming, and open door associated with the Pleiades that speak of the 7 Maidens, the Congregation of the King. Astonishingly, such a 7 ‘Menorah’ alignment will occur also at the initiation of the Transit of Mercury with 7 heavenly bodies. Such amazing celestial occurrences are not and do not occur independent of each other but shows that the intricacies of the Creator has synchronized such events for a purpose and perhaps a message.
_________________________