The purpose of this study is to show various illustrations suggesting that there is a direct geographical relationship between the layout of Rome and the Cydonia Mars Pyramid Complex of the planet Mars. In ancient times, the area adjacent to the Tiber River was called Campus Martius or the Field of Mars. This in itself is a give-away of the direct association to the subsequent ley-lines of the Vatican and Foro Romano. It would have been humanly impossible for those of ‘primitive’ Romans to have this celestial foreknowledge of the exact layout of Mars' Pleiadian Pyramid complex in a totally different planet just by direct observation. This revelation had to have come from either visions or direct communication from those from the ‘Plains of Mars’ themselves.

It has only been in the last decade that science has even hinted of Mars once having a possible atmosphere and perhaps even water to sustain possible life. Regardless of such speculation, the Pleiadian Mars complex is a pattern that is seen in other significant archeological ancient sites like in Mexico, South America, Africa, China and the Middle East. Whoever these ’beings’ were or are had a profound impact on the psyche of early human civilization, enough to copy this most sacred of city ley-lines found around the world. In the following depictions, the Cydonia Mars complex is superimposed at a rotation of 180° and flipped 90°. These patterns are part of the pre-Adamic mysteries of who and what was taking place on Earth and other planets for that matter.

Perhaps such ‘beings’ are to return or manifest as they are already here in the shadows waiting for the opportune time to reveal their agenda that according to the Bible, in the End of Days, will be according to the working of Lucifer, Satan. He will be using signs and wonders to beguile the world to its ultimate self-destruction if not intervened and thwarted by the 2nd coming of Jesus Christ. The overlay of the Cydonia Mars pyramid complex over Rome strongly suggests that the major points of the ancient city are in direct proportion and angles to the ones in planet Mars. Such monuments as the Coliseum and Popolo correspond to matching points on Mars. Most impressive, the Castel Sant’ Angelo corresponds to the D & M Pyramid that is in a pentagon geometry configuration.

The hexagram pattern also matches certain avenues of Rome and end-points where prominent government buildings or where ancient Roman structures once stood. The Obelisks are made of granite that has quartz or minerals that function as receptors and conductors of resonance and energies. In essence they are functioning as antennas or receivers like a modern HAARP. They resonate frequency and energy, perhaps to a Star-Gate? This is why the Pantheon is round as is the Vatican quad and Popolo plaza. The Vatican and the Papacy have nothing to do with Jesus Christ as its very geography and architecture tells of who it really is patterned after and perhaps who it is really venerating and expecting.

The Vatican, at the foot of the Plains of Mars is configured to reflect the abodes of the Fallen Angels that have left their 1st Estate, those that have joined the celestial Luciferian rebellion against the Creator GOD YHVH in the Heavens and the True Church while on Earth. This study further suggests that the Vatican is the usurper of the Keys of the Earthly Gates as she claims authority over the Celestial Gates, the Golden and Silver ones. It is the power of the Principalities of the Air in Heavenly Places that currently exert spiritual authority over the various gates of the Earth, geographically and spiritually. This was obtained by deception as they were subdued by Lucifer in the Garden of Eden. Many speculate that perhaps Lucifer had a corresponding dominion in the Cosmos aside from this ‘priestly ‘ duties of leading worship, praise, singing and covering over the very Throne and Ark of the Covenant  wherein YHVH sets as LORD Almighty. It is this place that he coveted and seeks to overthrow.

Lucifer and his Fallen Angels know where the Stargates are located, on Earth and in Heaven. The Bible teaches that Lucifer currently still has the legal right to appear before the judicial court of Heaven to accuse the Brethren. There is an administrative court from where the LORD reigns over all that is. It is at this place Lucifer seeks to enter through the gates to overtake. Until that time, this dominion, kingdoms and courts or ‘Basilica’ which means seat of a Throne is given to his High Priests to further his agenda. The Celestial Gates correspond to the constellations of Ophiuchus, Guardian of the Golden Gate. He is the Serpent Bearer but in the Luciferian perverted rendition, he is the depiction of the coming AntiChrist that is supported by the Serpens or the
Dragon. At the Silver gate is Orion the Guardian that is attributed to being the Mighty Hunter before YHVH

This Orion star map configuration of the Vatican is suggested to be supported by the spiritual bastion of the Fallen Angels that have helped implement Lucifer’s protocols on Earth. As the celestial pattern involves a type of fort, it is usually pentagonal in shape. This is seen and copied in all the other major Luciferian world capitals. Geopolitically, the Vatican which is a literal kingdom on Earth does not represent Jesus Christ’s Kingdom. The Basilica or the place of the Throne is commemorated to ISIS, the Queen of Heaven, not YHVH. The Bible exposes this conspiracy that ‘she wishes to sit as queen’. Eventually the pact with the Vatican and the AntiChrist will move this literal throne to the Holy of Holy in Jerusalem and it is there where the AntiChrist along with the prompted workshop of the world’s masses will sit on the rediscovered Ark of the Covenant Moses made and proclaim to be GOD.

This study also suggests that the Luciferian Mason Motifs of the Vatican are interwoven by various ley-lines going out from the St. Peter’s Square Obelisk suggests a pyramid type of layout with pentagrams and a Roman Catholic Fish Mitre. This headdress is of Babylonian origin that is attributed to the teaching of the Fallen Angels. This rendition of the religion is that of the Dagon fish god. Thus, the head resembles the open mouth of the fish. There is a Square and Compass that is centered on the Piazza Mazzini.  Inside the Vatican there is a metal orb that is called the Circle within the Circle. It has connotations like the wheels seen by the Prophet Ezekiel and others but it is an encrypted planet Mars. It shows the ravages of a long-gone Angelic and cosmic war as Mars is known as the Scarred Planet for its gargantuan gashes and apparent surface devastation.

As noted, the core city layout of Rome appears to match that of the Cydonia, Mars Pleiadian pyramid complex. There are several key correlations that suggest this. One is that the 3 motifs are present with the pentagonal ‘Castle of the Angels’ or fortress, Saint Angelo. Then there is an exclusive horse track or elongated track that corresponds to the Face of Ala-lu. Lastly there are the 7 Hills of Rome that correlate to the 7 stars of the Pleiades. Within the Roman Forum a more accurate rendition of the Cydonia pyramid city complex is presented. In this detail, the center fulcrum is the Colosseum. It is at the center of the pentagram geometric design layout as it is found on Mars within the Pyramid City.  In-between this star map and the Vatican is the Campus Martius or the Plane of Mars.

The study further suggests that the Vatican Basilica with the Piazza and entrance approximates the motif of the Orion constellation. In particular the Piazza corresponds to Orion’s Belt with the center-piece being the Ancient Egyptian Obelisk. This ‘Shaft of Bel’ was taken from the Temple of Heliopolis or the City of the Sun.  The whole Piazza oval corresponds to the total 6 mains stars of Orion. With these ley-lines along with that of St. Peter, the motif creates an encrypted Chi Rho cross. Additionally the Constantine Cross as the Chi Rho is also called is in approximate phi ratio and this study suggests that like all similar temples to the ‘gods’, the complex correlates to an anthropomorphic man.

The Vatican ISIS and Orion pattern is an overlay of their sexual union, cosmic and on Earth by this layout. The yellow outline of the Vatican core appears to resemble the form of a female, a woman that is pregnant. This is signified by the oval Piazza where the Shaft of Bel, the male phallic symbol is initiating intercourse. This motif is a standard motif designed in various world capitals like the New Rome, Washington, DC with the Mall leading up to Capitol Hill, a direct inference to Capitoline Hill. Incidentally, the dome of the DC Capitol building is crowned by a statue of ISIS. This study suggests that the same spirit of the Priesthood and religion is present in the Roman Catholic religion. It is the successor to the Religion first initiated by Nimrod after the Flood of Noah. It is a counterfeit and usurper protocol masking the true religion of YHVH. The Basilica of St. Peters means the Throne. This spot astronomically corresponded to the star Sirius or ISIS. To the Luciferians, she is the Queen of Heaven but more precisely the feminization aspect of Lucifer’s perversion.

To reiterate, the Vatican Basilica and Piazza complex in Rome approximates the constellation signs of Sirius and Orion.  Both cosmic signs appear to fuse into the Chi Rho cross of Constantine. The Piazza Rome incorporates the alignment and ley-lines of Orion’s Belt. The St. Peter’s Basilica which means Throne corresponds to the star Sirius or ISIS. She is venerated as the Queen of Heaven by the continued succession of the Babylonian Religion of the 1st Mason, Nimrod after the Flood of Noah. It is evident what and who the Roman Catholic religion truly venerates and sets-up as enthroned in their main temple on Earth presently.
__________________________ 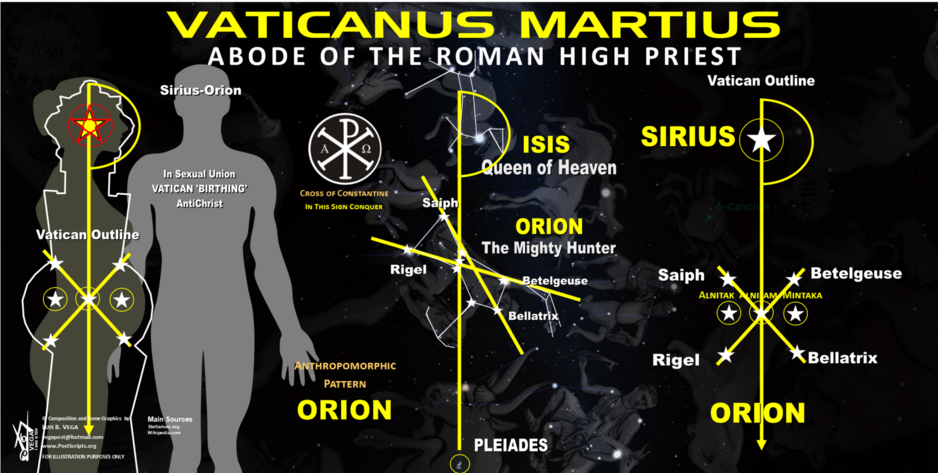 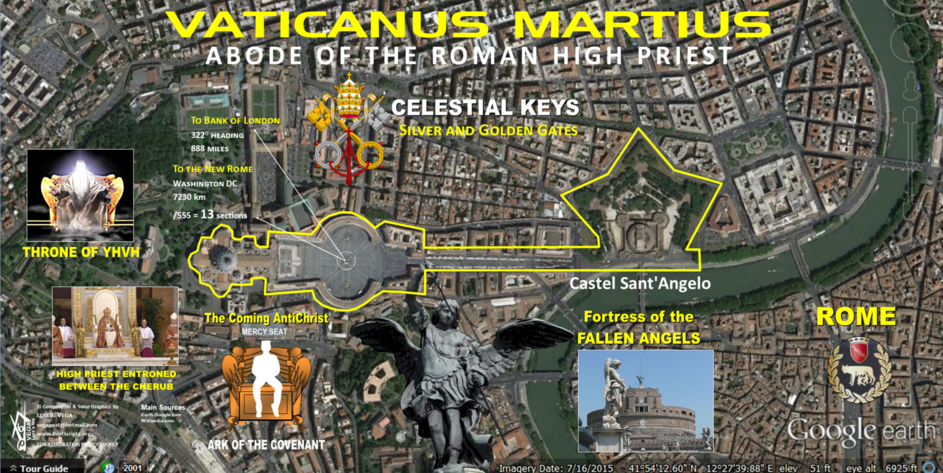 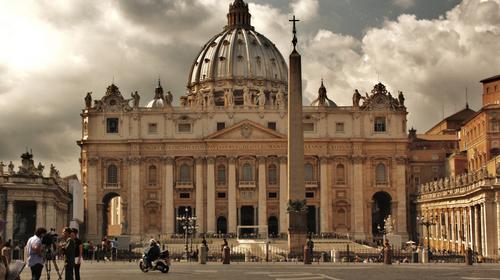