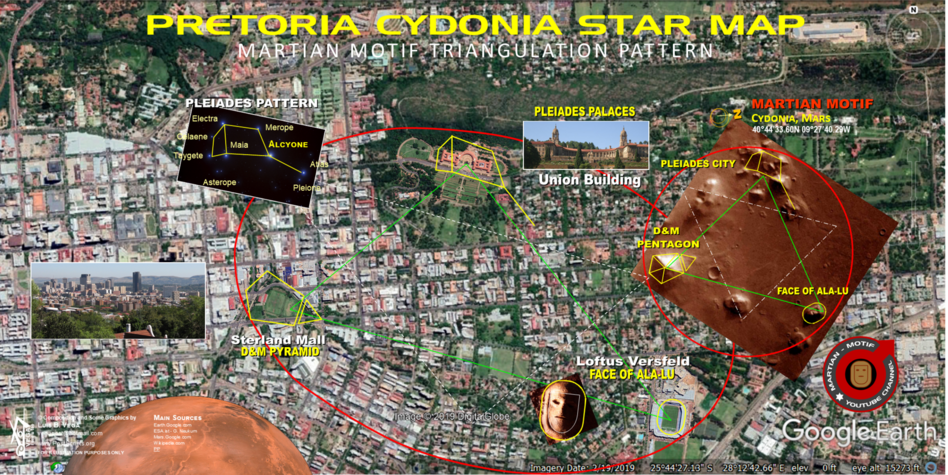 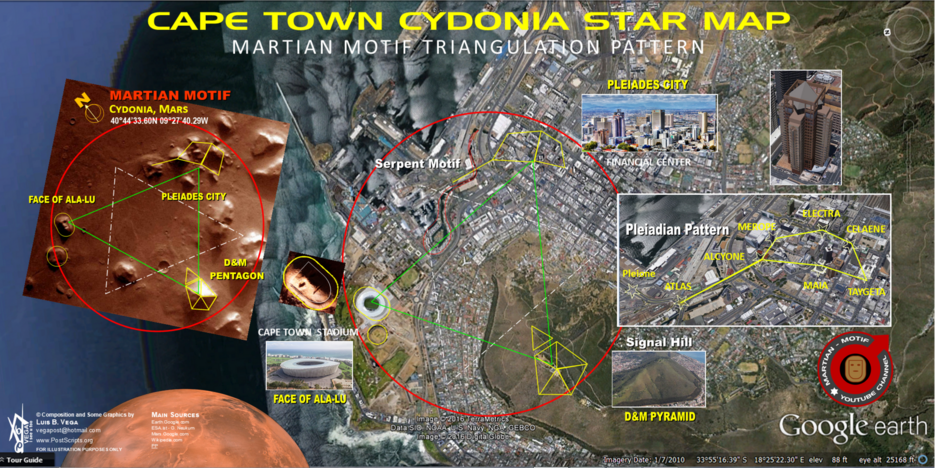 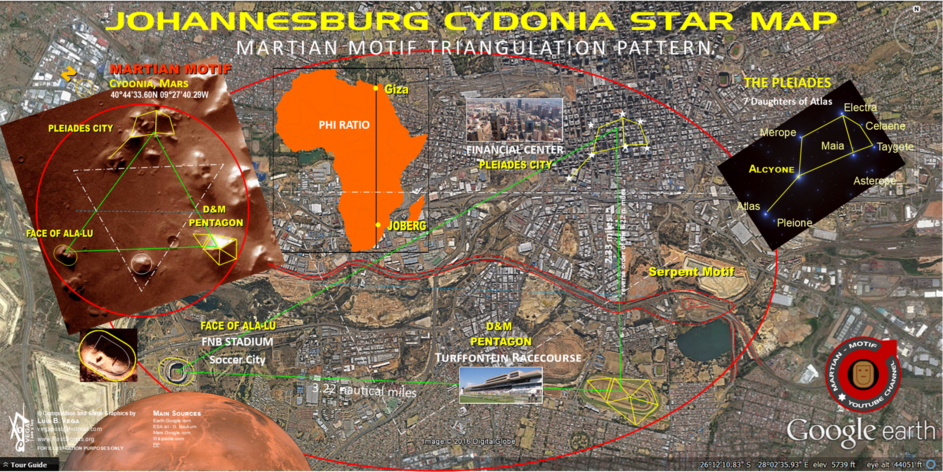 The purpose of these illustrations is to suggest that several cities in South Africa incorporates the Cydonia, Mars pyramid layout. This configuration includes the Pyramid City, the Face of Ala-lu or Face of Mars, and the Pentagram pyramid. The first city to be considered is Johannesburg. From an aerial view, their does appear to be 3 main centers in Johannesburg fit this design. These 3 localities are the Soccer City next to the Crown Mines ‘triangle’, the Turffontein Racecourse and 7 main towers or skyscrapers of the financial center. In the case of the Cydonia, Mars motif complex, the triangulation in Johannesburg although a bit elongated, inverted 180 degrees and rotated 45 degrees. The major difference has to do with the Pleiades as it is inverted horizontally. This adjustment allows for the approximate matching of the avenue ley-lines and the correspondence to the 7 main structures that have to do primarily with banking.

The other major difference is seen with the Soccer City stadium. The enclosure is designed as to pentagram but the ‘triangle’ cone or pyramidion is broken or off to the adjacent side. This area correlates to the Crown Mines that is amazingly construed to a triangle outline that matches the heading direction. The Face of Ala-lu or Face of Mars that corresponds to the Turffontein Racecourse is rotated at 45 degrees. What is also very notable to illustrate is that the hexagram that the motif complex depicts is intersected by a ‘Serpent’ motif. This is suggested by the major motorway or freeway that intersects the hexagram at a 90-degree angle as the entire motif matches the converging points of the hexagram. This ‘Serpent’ is very prominent, and its ‘head’ corresponds to the Face of Ala-lu that suggests its connotation. Out of the mouth of the ‘Serpent’ is a 2-prong tongue as well.

As in other world capital motifs of this Cydonia, Mars pyramid complex, the ‘Serpent’ is interwoven in the topography in very ingenious and encrypted ways. To the Ancients, this ‘Serpent’ was and is Lucifer the ‘Shining One’. He is believed to give so called wisdom and knowledge and as such those that believe his lie are granted the current powers over his kingdom on Earth, for the time being. Their signature motif incorporates their control over the finances, government, and society. As noted, this study suggests that the core financial center of Johannesburg incorporates the approximate correlation to the Pleiades layout. There are 7 main skyscrapers or buildings of prominent importance that usually involve banking institutes and have pyramids on top of their skyscrapers. This is the case with the financial district of Johannesburg as with all other such banking centers of the world that also cryptically hide such a Martian extra-terrestrial motif.

One very interesting observation about the location of Johannesburg in relation to the Great Pyramid of Giza is that the heading is at 3.22 degrees. This is just another of the Luciferian signatures of how they incorporated their diabolical numerology into where certain centers. Such hidden sites are to be located precisely as they correlate to Earth’s energy points, sacred ley-lines that construe perhaps inter-dimensional gateways or portals for the Masters of the Motif, that of the Cydonia, Mars kind. Again, this is not to suggest that all who work in world banking or sporting venues are of this caliber of so called Elites or have such a knowledge but that those that have given the blueprints and are behind the financial orders apparently still hold to the composition as did the Ancients that were in direct contact with the Fallen Angel entities that bestowed them such positions of power on Earth; for the time being.

This study suggests that the South African coastal city of Cape Town is also configured to the Cydonia, Mars pyramid complex. The longitude is at 33 degrees and the Martian motif is inverted vertically. The Pentagon Pyramid corresponds to a natural pyramid, Signal Hill overlooking the amazing city. The heading is 72 degrees, a factor of cosmic time. The heading from the Cape Town Stadium that is suggested corresponds to the Face of Mars is at the 33.3-degree mark, a coefficient of the 333 degrees on the Cydonia, Maris configuration. The financial district corresponds to the Pleiades Pyramid City of Mars. There are approximately 7 towers or skyscrapers that appear to match the orientation and ley-lines of the Pleiades. There is one prominent skyscraper that has a pyramid at the top. This is also true of Johannesburg. There is also an apparent ‘Serpent’ motif that usually accompanies this hexagram motif. In the case of Cape Town the depiction weaves in-between the corresponding stars of Atlas and Alcyone and converges on the intersection of the hexagram and center ley-line.

This section of this Pleiades composition is correlating to the ‘stand’ as in a candlestick or Menorah. The ‘Serpent’ motif is as though the ‘Serpent’ is supporting or upholds the Pleiades that correlates to the financial mammon that the ‘Builders’ sought to represents, at least on Earth. This is also seen in Sao Paulo with the same ‘Serpent’ motif at the base of the triangle of the Pleaides configuration. The hexagram is not ‘Jewish’. It is an ancient motif that predates the Flood of Noah but crossed over as Nimrod incorporated it into the mystery schools of Lucifer’s religion. It was when the Jews where in captivity for their disobedience to YHVH that they here in Babylon for 70 years.

It was there that the ‘Wizards’ took to the Luciferian mystery schools such as the Zohar, the Kabbala and the Talmud. To such these books among others are greater than then the Torah. This is an anathema to the Protocols of YHVH. These people that follow and are taught of Lucifer’s so-called secrets are in league and seek to replace the true Word of YHVH. This element that pervades Judaism is what Jesus called the Synagogue of Satan that is an affront to the Creator and Israel needs to deal with; to expunge it from its core. This is not to say that Jews exclusively make up such a cabal but there is a predominant amount; others include Gentiles of all sorts of walks and religions. By itself the hexagram is just a geometric configuration but when encircled and adding magic incantations, it is used by the Luciferians as a ‘key’ to open spiritual gates.

This study also suggests that the city of Durban in South Africa incorporates the Cydonia, Mars motif. This depiction is of various pyramid complexes that are in agreement geometrically and mathematically. This motif from Mars has been seen in designs from ancient Earth civilizations. In modern times, such has still been the case. In the case of Durban, it is another example of 100s of other such encryption found all over the world. Durban is a very beautiful city on the tip of South Africa that has this Martian motif, although very elongated. The Pleiadian star cluster corresponds to the financial center that has 7 prominent towers or ‘pyramids’.

The ley-lines give a clue as to the orientation as the edge follows the shoreline and the diagonal is very evident from the monuments and plazas of the Workshop Shopping complex. The key correspondence to the Alcyone is the 88 on Filed tower.  The number 88 is associated with Mercury, the God of Mammon and the planet takes 88 days to revolve around the Sun. The Face of Ala-lu or the Face of Mars corresponds to the Moses Mabhida Stadium. It is an amazing and beautiful work of architecture. The Pentagon Pyramid of Mars corresponds to the Greyville Racecourse area. Its outline suggests the pentagram or 5-sided geometric configuration of the pyramid.  In terms of some key measurements the following are suggested as approximations based on GoogleEarth coordinates.

The encryption of the motif is farm more sophisticated as the 3 main structures are hidden in plain sight. The Pleiades Pyramid City always corresponds to the financial centers of the world capitals. The cadre behind such money and the love of money has spawned much evil with greed, usury, and theft. It has been the major world banking conglomerates that are guilty of all sorts of sins. This is not to say that all who work for banks are involved or even know of such clandestine conspiracy to defraud Humanity of its God-given wealth and resources.

The point is that those who commission the design and command the resources of such a Martian Motif or template are the one in the same that are in league with Lucifer as it is he that it is the God of this world and of Mammon or money. Such cities of the world thus who are ruled and governed by such people go to great lengths to depict this signature as it mainly construes a geometric hexagram. With the magic and wizardry such are involved with, it provides a spiritual dimension in their dealings with financial and decisions that are pegged to the Sun, Moon and the Stars.
__________________________ 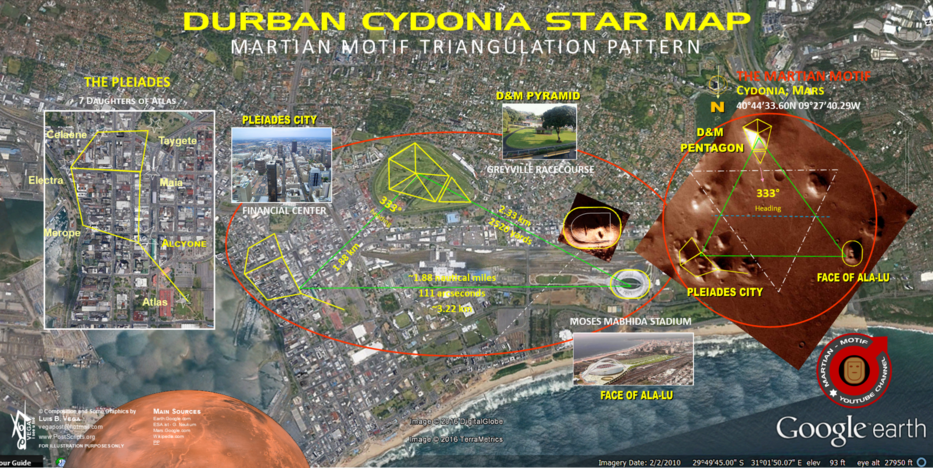