​#673:
6TH SEAL RAPTURE?
WE JUST FINISHED GOING THROUGH
THE TRIBULATION AND GOING INTO
ANOTHER ONE?
Testing the Spirits or the Theories

For at that Time there will be Great Tribulation, Unmatched from the Beginning of the World until now, and never to be seen again. If those Days had not been cut short, nobody would be Saved. But for the sake of the Elect, those Days will be cut short’. -Matthew 34:21-22

Now one would agree that if it seems the Tribulation has started, it is because it can be seen as a Shadow or Pre-Cursor of what is coming. One just has to put the Theory to the Test. And the Standard? It is Jesus and His Regalement. Which is? The Tribulation would be such a Horror and the amount of Mass Death would not even compare to the total Slain since Abel. One is not talking about the Millions Death that have occurred since the 2 World Wars prior. No, one is talking about a Death Toll in the Billions. Has that happened in the past 7 Years? No.

Or that the World is presently in or about to finish the Tribulation Experience. One is not particularly interested in such Debates as the Bible is not Clear as to the exact Scenario, and on purpose, in one’s Opinion. And one does not care to critique other Watchmen's Work. One does not like to argue such Points of Contention as the Interpretation of others are just as valid as one’s Interpretation of the possible Rapture Scenario. However, many Followers of one’s Studies are pressed for one to address these Teaching and to present the Evidence for a Contrary Perspective.

Thus, it is not a matter of ‘Them’ being ‘Wrong’ and not of one ‘Being Right’. One will just present where one is at in the Learning Curve. That is all one can do and present. The following is one’s Response to what one thinks understood in reading and hearing how some End Time Watchers are also Speculating an Alternative timing of the Rapture Event. We are just coming to an end of the Tribulation? Or the Rapture occurs at the 6th Seal? Ok. Let us consider such Suppositions. Could be. But to Test the Spirits or Theory, one would just have several Questions that should be very easy to answer in both cases.

Some Questions then…
Since those that purport to believe such a Scenario, up to the 6th Seal can see in Hind-Sight how it all panned-out. The following List is of those Events that are to have taken place before the 6th Seal or the whole Tribulation, all inclusive. This is not to find fault but to genuinely ascertain the Facts as they should have been Historical Events by now. These are the Tests by which one can then Ascertain if the Tribulation Period had already started and the Church Age Believers are looking at Hard Times or ‘Tribulation’ up to the 8th Seal, which to many, is when the ‘Wrath’ starts, etc. All these Questions should have Answers, concretely and without Doubt or Guess-Work.

1-How was the AntiChrist?
2-Who was the False Prophet?
3-When did the Daily Sacrifices start?
4-When did they Cease by Command of the AntiChrist?
5-Who was the ‘Many’ that Israel makes the Covenant of Death with?
6-Where did the Remnant of the Jewish Faithful flee to? Bosra or Petra?
7-How were they provided for, some 1260 Days of the 2nd Half of the Tribulation.
8-Where are all those Beheaded that refused the Mark of the Beast?
9-Where are the 2 Asteroids that are to hit Earth, 1 by Land, 1 by sea?
10-Where on Earth is the 1/3 of the Grass burned-up, Water turned Blood and Ships wrecked?
11-Where is the Heat so intense, People wanted to Die from it but could not?
12-Where was the Angel flying around admonishing the Peoples of Earth not to take the Mark?
13-Where were the Fallen Angels, i.e., the Titans released from Tartarus or the Bottomless Pit?
14-When was that Great Earthquake that leveled All the Cities of the Earth?

One believes the Confusion of how one can surmise a ‘Rapture’ Event at certain points in the Book of Revelation is that, as one has presented before, there are 7 Translations or ‘Raptures’ throughout the Sequences Revealed or given in the Book of Revelation. It purports that the 7 Raptures follow the Chiastic Pattern 1rst presented by Chuck Missler. He identified 7 ‘Raptures’ from Adam to the end of the Church Age to end with the Rapture of the Bride, etc. The other ‘Error’ one surmises is based on the Believer of Replacement Theology.

This is where the Remnant of Israel or the Elect are Confused and Replaced with the Remnant and Elect of the Church Age. One believes that there are 2 Covenants, an Earthly one based on Physical DNA Racial Makeup, i.e., the Bloodline of Abraham through Isaac and Jacob. Then there is the New Covenant that is based on the Spiritual Heirs of Abraham. It is those who Believe in the Messiah, Jesus is by Faith, just as Abraham Believed, etc. But as to the 7 Raptures of Revelation? One adds to this Pattern in that there is a Chiastic of Rapture Events to be played-out,

One proposes that the 7th Rapture of the Bride of pivots the 7 ‘Raptures’ or Translations found in the entire Book of Revelation Chronology. More about this later. But here is 1 Test that the Tribulation Period has not occurred yet. Those who propose that one is in the Tribulation Period surmise that the Revelation 12 Sign was the ‘Mid-Point’ of it. No. The Revelation 12 Sign was not a ‘Mid-Trib’ Sign as some proposed. It does not add-up Mathematically. How so? Consider the following Calculus. The Theory is based on the 2014-15 Blood Moon Tetrad that Kick-Off the 7-Year Tribulation.

A Rapture Chiastic Pattern
Concerning the Revelation 12 Sign, if it was the Mid-Sign of the Tribulation Period since 2015, then based on the Day Count of 2520 Days, it does not ‘Add Up’. The Mid-Point would have been September 2019 not September 2017. As one can see, the entire Sabbath Cycle has already ended. Thus, the Revelation 12 Sign was not ‘Mid-Point’. That Date was 2.5 Years off as it corresponded to March 11, 2019. See Charts below. One believes that the Catching-Away of the Apostle John, referred as the Beloved of Jesus is a Metaphor for the Church Age Believers.

Here is the Chiastic Fold of the 7 Rapture Events that occur, in one’s Estimation during the 7-Year Tribulation Period that is marked-off by the 1st Seal, being the start of the Wrath of the Lamb, all inclusive. This is one’s Interpretation, as there are many Variations of who qualified as a Rapture Type. Note that some of these Events are ‘True Raptures’ in the sense of a Supernatural Occurrence. Others are what one deems a ‘Translation’ as in the Ascension of Jesus for example. Or it is a Motif or Metaphor as in a Typology of a Rapture Event like the Flood and Noah’s Ark being the ‘Chamber’ of Safety, see Isaiah 26:20.

Escaping Judgment
Based on one’s Interpretation, after the Pre-Tribulation Rapture, the Bride is sat in Judgment as the 24 Elders. It is thereafter that the Scroll of Judgment is given to Jesus that the Judgment or ‘Wrath’ begins. The Breaking of the Seals is the Judgment, with the varying Degrees of Wrath being poured-out upon the Inhabitants of the Earth for that 1 Hour of Testing.

Thus, the Bride of Christ cannot be further Tested nor be under the Worldwide Judgment that comes upon the entire Globe. Why Not? It is because she is already in Heaven when the Judgments of ‘Wraths’ begin. See the following YouTube Video Study on this Perspective by Lee Brainard.

Is This What Is Next? | LIVE with Tom Hughes & Lee Brainard
https://www.youtube.com/watch?v=prYtlVLLmdg

One is not saying one is right or holds the ‘True Interpretation’. But one suspects that many End Times Watchers are slipping into the Pre-Wrath Rapture Scenario as they see and sense the ‘Delay’ in the Recapture Event itself. And how the ‘Tribulation Shadow’ is increasingly being cast upon the World as it disintegrates into utter Chaos, by design.

As ‘Tribulation Period’ Like Conditions are being Orchestrated and Manifested, one can see how some End Times Watchers are beginning to rationalize that the Church Body will still be present on Earth for such Calamities, up to the 6th Seal. However, this is more of a US-Centric Interpretation as the USA and Christians in the West have had it ‘Good’ with Peace and Relative Prosperity, especially since the end of the 2nd World War. The American Church has not Suffered as many are and have in the East.

So, the ‘Explanation’ is that the Bride is not being Rescued until the ‘Wrath’ of the Lamb occurs from Seal 6. Again, one would argue that the Breaking of the 1st Seal is the start of the Judgment of the Lamb, Wraths all Inclusive. It is just that the 1st Seal is one of a False Peace by and through the Revelation of the AntiChrist. Repeat.

The Revealing of the AntiChrist and his ensuing World Peace and New Order constitutes the start of the Wrath of Jesus. If not, then the Sequence of the AntiChrist is to be known before the Bride Escapes? No. Fellow Watchers are confusing the Notion that it has to get to ‘Wrath’ Level Events for them to have the Bride of Christ be removed from Earth. One then gest the following type of Controversy and Questions, which is fair.

‘Then how do you explain in Matthew 24:9 when Jesus says we will be handed over to Tribulation, and at Matthew 24:29-31 Jesus said, ‘Immediately after the Tribulation’, you will see the Signs in the Heavens. And the Lord will come and gather His Elect. Revelation 6 is a more Detailed Picture of what is happening through the Birth Pains and Tribulation... In Revelation 7, John sees a Great Multitude appear before him after all that Trouble. We will be here for the Tribulation... And the Antichrist won't be a Classic Political Figure... He won't have a Family or want a Relationship’.

Jesus is talking to the Remnant Jewish Believers. Such Brethren are 'inserting' the Church Age Believers in the Context of the Jewish Covenant and Time Frame of the Time of Jacob’s Troubles. It is not the Church’s Trouble any longer. See Article about how Israel ‘Owes YHVH Rent Money Still’. As Pastor JD Farag states, ‘The Tribulation Period is about the Salvation of the Jewish Nation’.

#659: WHY THE BODY OF CHRIST CANNOT, WILL NOT OVERLAP 1 SECOND INTO THE 7-YEAR TRIBULATION PERIOD
https://www.postscripts.org/ps-news-659.html

It was only when the Apostle Paul was Commissioned by Jesus that the Church Body and Mystery of the Bride of Christ was Revealed to him to teach thereafter. To address such a Valid Understanding, one sincerely believes is a Mis-Understanding. The Church Age has been nothing but ‘Tribulation’. This was taught by all the Apostles and Warnings in all the Epistles of the New Testament. History bears this out.

Then, Jesus in the Olivet Discourse did not even hint at a Rapture Event until the end and after He stated that ‘No One Knows the Day or the Hour’. Of the Rapture event? No. If one sincerely reads and re-reads the Context of the Discourse, Jesus is speaking about how His Words would never Pass Away, but that the Earth and Heaven would Pass Way. And When? that such an Event is not known by what Day or Hour, etc.

Thus to Summarize, can the Rapture Event occur well into Seal 6? Yes. Can the Tribulation Period have already occurred presently as some surmise? Could be, but one doubts it based on the Evidence one has only provided and Understands, up to his Point in the Prophetic ‘Learning Curve’. But based on Jesus’ Standard of how Horrible it will be in the loss of not Millions, but Billions of People?

All the People Raised From the Dead in the Bible
https://www.learnreligions.com/people-raised-from-the-dead-in-the-bible-4109363 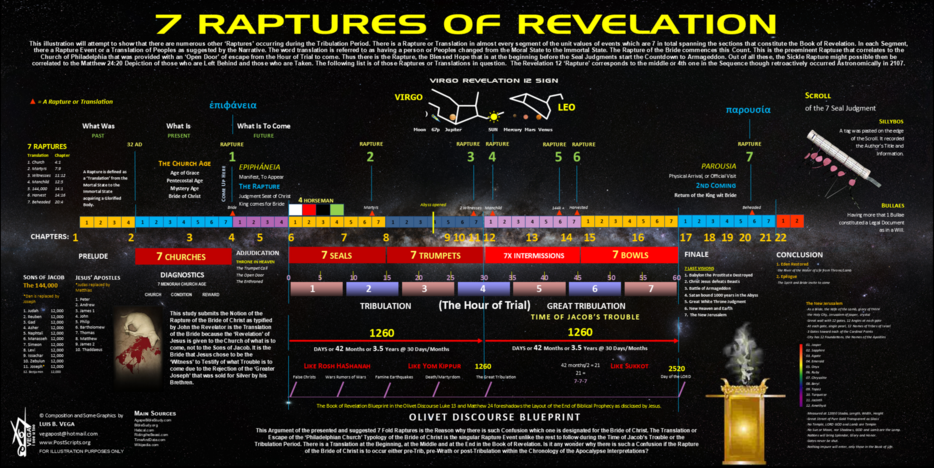