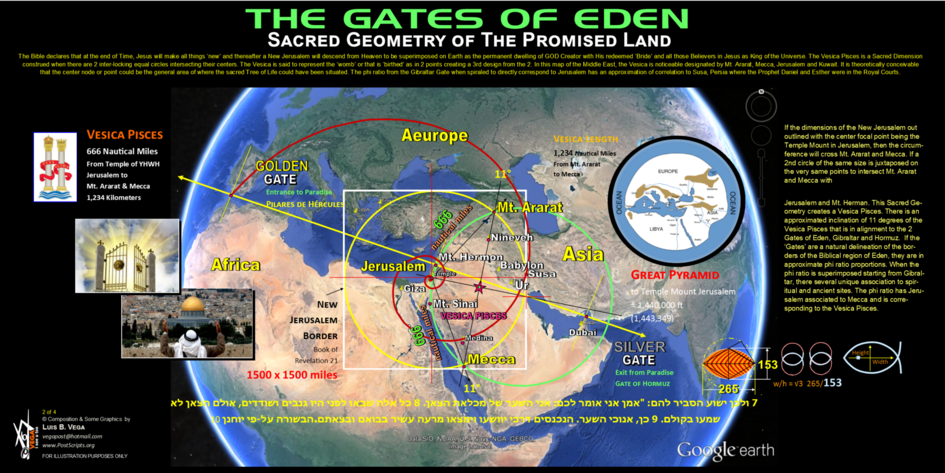 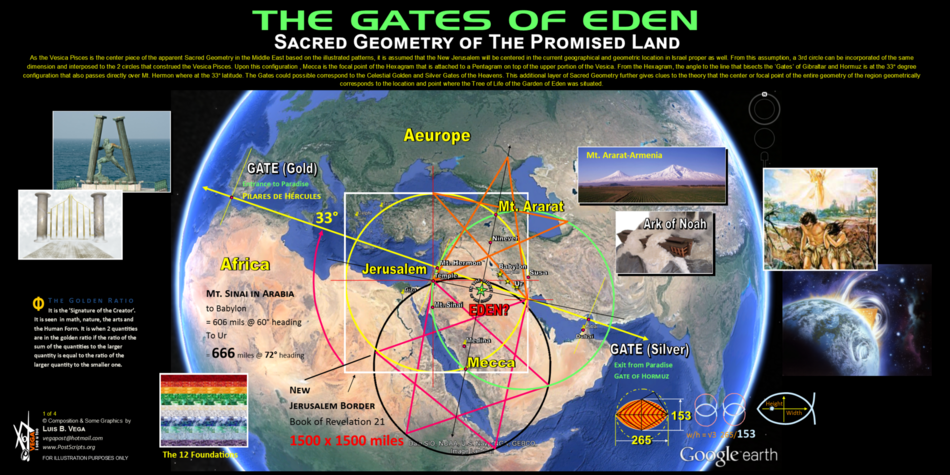 #161:
​THE GATES OF EDEN
COMING RESTORATION OF PARADISE
Sacred Ley-Lines of the New Jerusalem

‘Do you know the ordinances of Heaven? The rules of the Cosmos. The Order. And canst thou set the dominion thereof in the Earth?’ -Job 38:33

This study examines the various dimension of the physical layout of the Middle East with an emphasis on the Holy Land as it depicts an Orion’s Belt configuration. The context will be the prophetic notion of the coming New Jerusalem that is outlined specifically in the last book of the Bible, Revelation. The following observations will rely heavily on geometry and Geometria. More precisely the focal point of all measurements will be derived from the Temple Mount in Jerusalem. It is speculated that the Garden of Eden was created by YHVH for the purpose of sustaining life and the first humans, Adam and Eve.

The Bible gives certain geographical landmarks to go by that suggests that the area where the Garden was corresponded to literal geographic markers. More so, the Garden had 'gates' or doors to its entrance that this study will consider are in direct alignment to certain ley-lines and sacred angles. Thus, this study will seek to note some peculiar geometric and geographic landmarks of the area that will constitute the future and literal dimension of the New Jerusalem as a template.

The dimensions of the New Jerusalem may have a possible relationship to the Eden and its Gates as it corresponds to the Middle East, the Holy Land and Jerusalem. For example, if the dimensions of the New Jerusalem are outlined with the center focal point being the Temple Mount in Jerusalem, then the circumference will cross Mt. Ararat and Mecca. If a 2nd circle of the same size is juxtaposed creates a Vesica Pisces that encompass the whole of the Middle East.

This study suggests that the Gates of Eden were situated in the proximity of the geometric Vesica Pisces. The Vesica Pisces is a sacred dimension construed when there are 2 inter-locking equal circles intersecting their centers. The Vesica is said to represent the ‘womb’ or that is ‘birthed’ as in 2 points creating a 3rd design from the 2. There is an approximated inclination of 11° degrees of the Vesica Pisces that is aligned to the 2 Gates of Eden that this study suggests corresponds to the Straits of Gibraltar and the Straits of Hormuz; initially a front and back door. If the ‘Gates’ are a natural delineation of the borders of the Biblical region of Eden, one noticeable geometric correlation to each other is that they are in phi ratio.

The Womb of the Earth
When the phi ratio is superimposed starting from Gibraltar, there are several unique associations to spiritual and ancient sites throughout the whole of the Middle East. The phi ratio has Jerusalem associated to Mecca and is corresponding to the Vesica Pisces. In this map of the Middle East, the Vesica is noticeable designated by Mt. Ararat, Mecca, Jerusalem, and Kuwait. It is theoretically conceivable that the center node or point could be the general area of where the sacred Tree of Life could have been situated.

The phi ratio relationship can be construed from the Gibraltar Gate when spiraled to directly correspond to Jerusalem. This geometric relationship has an approximate correlation to Susa, Persia. It is at this place on Earth where the Prophet Daniel and Esther were in the Royal Courts representing the interests of YHVH in their generation and standing for YHVH's will against constant conspiracies and scheming by the Luciferian enemies of the LORD that sought their demise and the whole destruction of YHVH's people. The phi ratio is a geometric relationship when 2 quantities have a ratio the same as the ratio of their sum to the larger of the two quantities.

This principle can be depicted in the tiling of squares whose side lengths corresponds to the Fibonacci sequence: 1, 1, 2, 3, 5, 8, 13, 21, and 34, etc. A golden spiral will be created by drawing circular arcs connecting the opposite corners of the squares. The phi ratio is also called the Golden Section, the Golden Mean, the Divine Proportion, etc. One amazing configuration attributed to the Vesica Pisces sacred geometry of the Promised Land is the hexagram. This configuration could be a clue as to where the Tree of Life or the ’midst’ of the Garden was. When the phi ratio pattern is superimposed to the center of the hexagram, the focal point of the phi ratio alignment, the city of Medina, Arabia is noticeably intersected.

Another very unique attribute is that it has long been theorized that the sacred temples, pyramids and ziggurats were built on energy lines and Earth vectors that corresponded to the star constellations in the sky. As noted, many major temple complexes have Orion as a key corresponding pattern. If the Orion constellation is superimposed to have its 3 belt stars correspond to the Babylon and Ur Euphrates alignment, at a 88° clockwise rotation, the phallus or sword of Orion directly intersects this ‘gate’. It is as if Orion is ‘intercoursing’ the heart of the Vesica Pisces that could be corresponding to the actually former dimension of the Tree of Life in the Garden of Eden.

It could stand to reason that spiritually, the Tree of Eternal Life was characterized with that which gave life, perhaps even a sexual union of sorts. Adam and Eve physically represented this assertion. Moreover, the direct command of YHVH to the first human couple was to multiply as having a fruitful womb from where the female would sprout new life as a ‘tree’ metaphorically speaking. As the Vesica Pisces is the center piece of the apparent sacred geometry, it is assumed that the New Jerusalem will be centered in the current geographical and geometric location in Israel proper.

From this assumption, a 3rd circle can be incorporated of the same dimension the interposed the 2 circles that construed the Vesica Pisces. Upon this configuration, Mecca is the focal point of the Hexagram that is attached to a Pentagram on top of the upper portion of the Vesica. From the Hexagram, the angle to the line that bisects the ‘Gates’ of Gibraltar and Hormuz is at the 33°-degree angle that also passes directly over Mt. Hermon where at the 33° latitude. It was at this place and time during the days of Enoch that certain Fallen Angels conspired against YHVH to take human wives for themselves.

Perhaps they came through some sort of gate from their dimension that still exists. The Gates could possibly correspond to the Golden and Silver gates of the Heavens in that the whole area, given the New Jerusalem template corresponds to the Orion constellation configuration. This additional layer of Sacred Geometry further gives clues to the theory that the center or focal point of the entire geometry of the region geometrically corresponds to the location and point where the Tree of Life of the Garden of Eden was situated. The following are just a few approximate measurements taken from GoogleEarth coordinates.

The Bible declares that at the end of Time, Jesus will make all things ‘new’ and thereafter a New Jerusalem will descend from Heaven to be superimposed on Earth. It is stated that the City will be the permanent dwelling place of YHVH the Creator with His redeemed ‘Bride’. The Bride will be constituted of all those Believers in Jesus as King of the Universe. It will be at this time and place where the Gates of Eden will be opened once more.

The City will serve also as a place of healing as the Nations will partake of the Fruit of the Tree of Life that provides healing. Along with a New Jerusalem, the Bible promises a New Earth and New Heaven. The Bible states that there will be no need for the Sun or the Moon as the Lamb, Jesus Christ's light will be so bright that it will light up all that there is. Given the typology, Jesus will be as the Orion, the true Light Bearer as in the Light of the World. In essence there will be no shadow in the New Jerusalem and a new Humanity will walk in that light for all Eternity.
______________________